Oh GK104, how we love thee, let us count the ways.  Oddly enough, we count three of the four boards being reviewed today utilizing this particular chip in multiple configurations.  The GK104 first made its appearance in the GTX 670 and GTX 680 products last year.  This refresh of the chip changes very little for the GTX 770.  It still features the full 32 ROPs, 1536 CUDA Cores, and 128 texture units.  The 256 bit memory bus addresses 2GB of GDDR-5 memory. 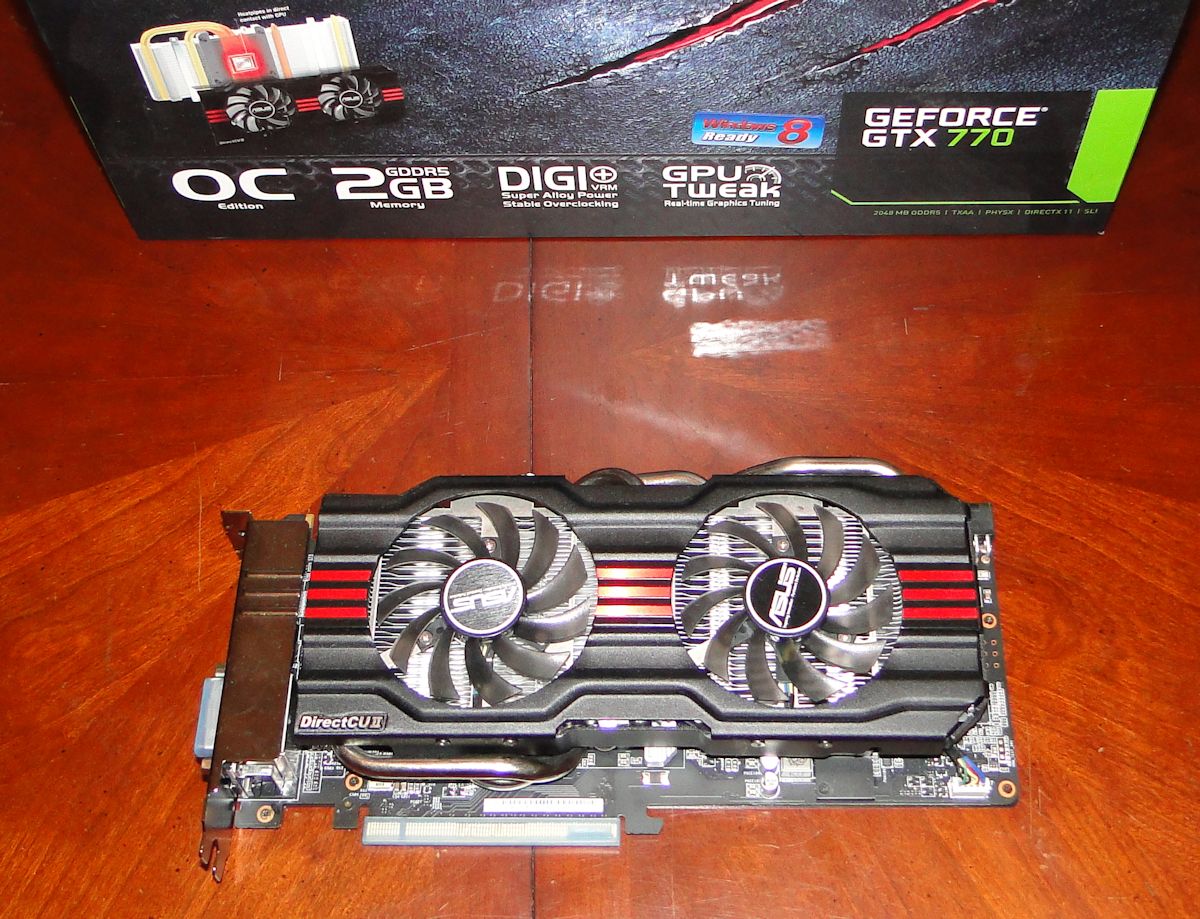 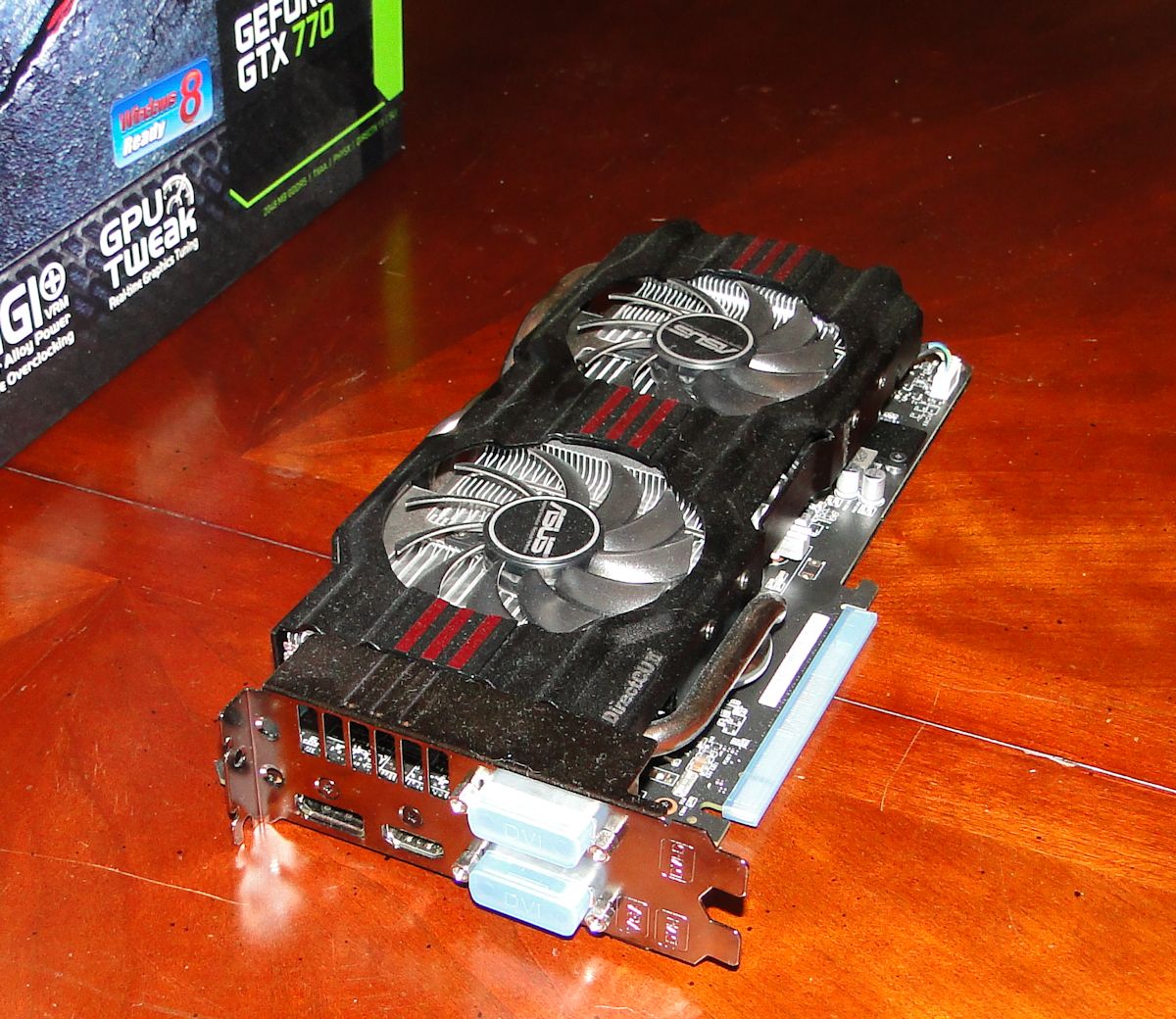 It wouldn't be my house if there wasn't dust!

The heatsink and fan are decidedly from the last generation of DCII parts when it comes to looks.  It does not feature the more complex/rounded/organic shroud as the GTX 780 DCII features.  As mentioned before, ASUS has dropped the triple slot setup for the latest GTX 700 series of high end cards.  This is a big positive for the product lineup.  While the triple slots did very nicely with cooling, it was a pain to have such large cards in residence in a case.  Going with a multi-GPU setup was also challenging with triple slot cards.  The card features two 80 mm fans that are of the older variety rather than the newer CoolTech fan featured on the GTX 780.  The heatsink features five heatpipes, two of which are 8 mm units.  This card also does not include the new 10 mm heatpipe.

ASUS has given this board all of the same features in terms of construction as the GTX 780.  It is a custom PCB with 10 total power phases (8 GPU, 2 memory).  It utilizes the Super Alloy components.  It has the Digi+ VRM functionality.  This all is again aimed at higher efficiency, better overclocking performance, and better thermals all around.

It is somewhat unfortunate the ASUS did not include the new cooler/shroud designs with the inclusion of the CoolTech fan, but it seems that this design was finalized before the new DCII units were available.  This does not make the board any less impressive though.  It does come slightly overclocked out of the box, and the board promises to be an able performer when it comes to cranking those clocks up. 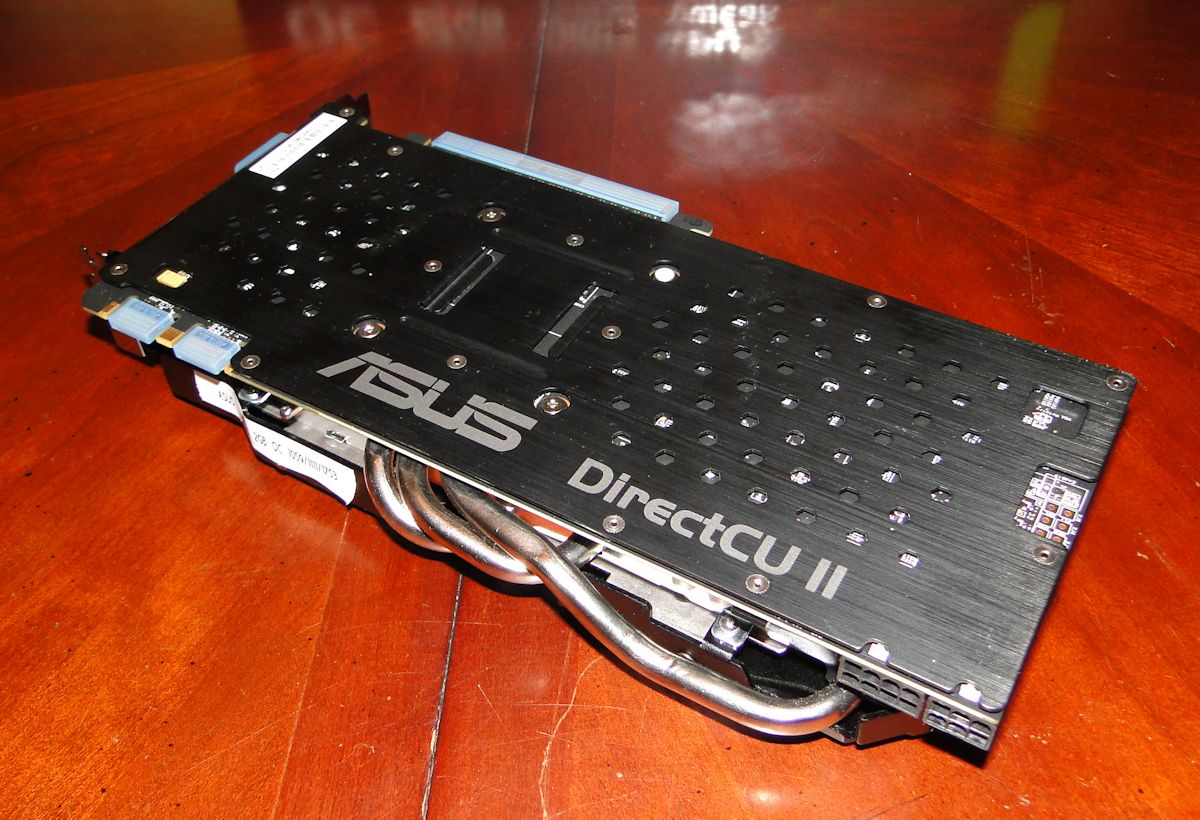 Yet another sweet, sweet backplate.  The power plugs actually feature LEDs under them that will let a user know if something is wrong with the power.  Unless the power is off…

While ASUS has done a nice job with this card, it is still essentially a slightly hopped up refresh of last year’s GTX 680.  Thank goodness that it is being offered for much less than what the original 680 was going for back then.