The Yoga 11S is the new middle ground for the Yoga series, balancing size with power and versatility. But can it balance both?

It seems like only yesterday (okay, last month) that we were testing the IdeaPad Yoga 11, which was certainly an interesting device. That’s primarily because of what it represents: namely, the slow merging of the tablet and notebook markets. You’ve probably heard people proclaiming the death of the PC as we know it. Not so fast—while it’s true that tablets have eaten into the sales of what were previously low-powered notebooks and now-extinct netbooks, there is still no way to replace the utility of a physical keyboard and the sensibility of a mouse cursor. Touch-centric devices are hard to beat when entertainment and education are the focus of a purchase, but as long as productivity matters, we aren’t likely to see traditional means of input and a range of connectivity options disappear anytime soon.

The IdeaPad Yoga 11 leaned so heavily in the direction of tablet design that it arguably was more tablet than notebook. That is, it featured a tablet-grade SOC (the nVidia Tegra 3) as opposed to a standard Intel or AMD CPU, an 11” display, and a phenomenal battery life that can only be compared to the likes of other ARM-based tablets. But, of course, with those allegiances come necessary concessions, not least of which is the inability to run x86 applications and the consequential half-baked experiment that is Windows RT. 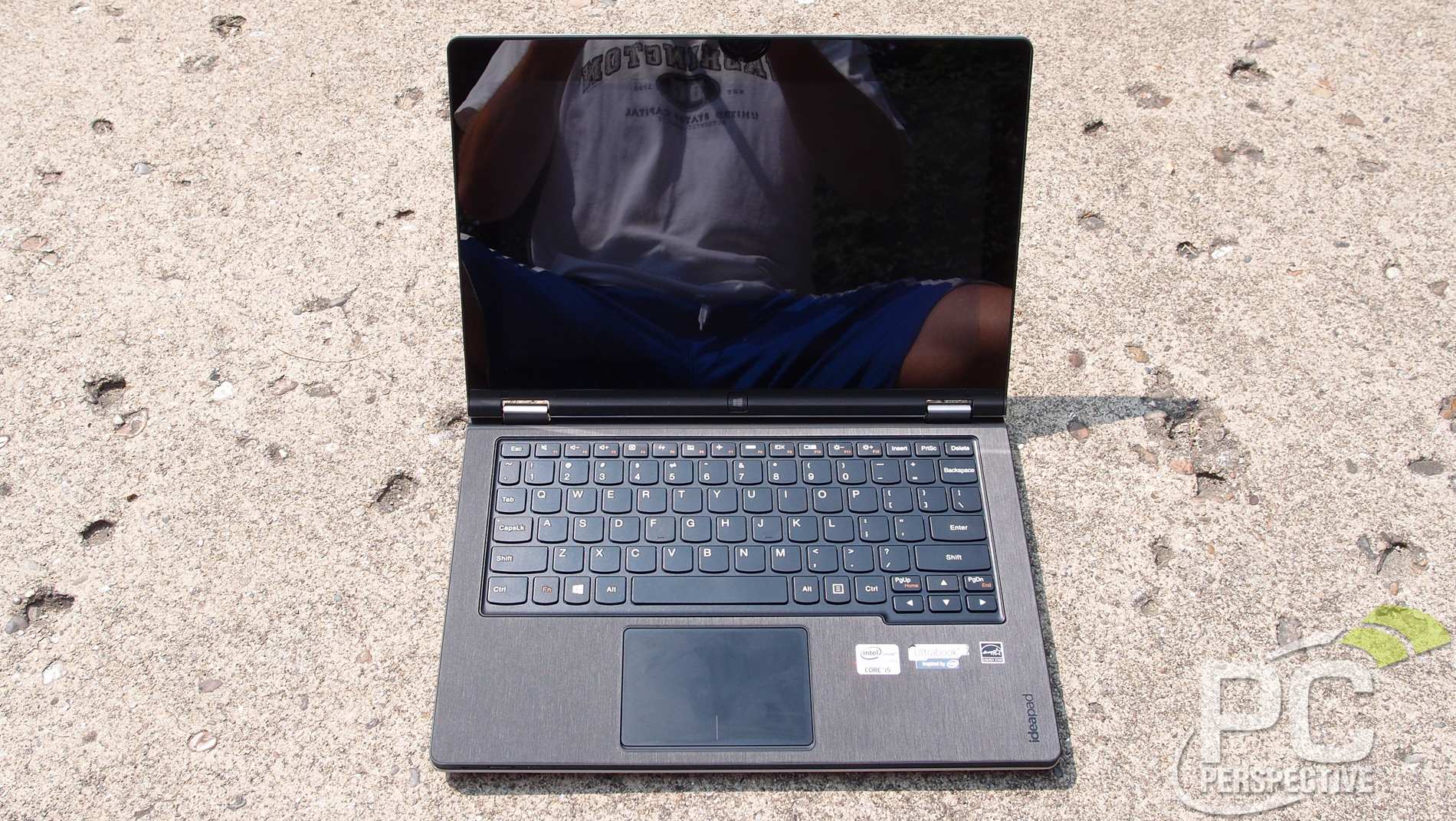 Fortunately, there’s always room for compromise, and for those of us searching for something closer to a notebook than the original Yoga 11, we’re now afforded the option of the 11S. Apart from being nearly identical in terms of form factor, the $999 (as configured) Yoga 11S adopts a standard x86 chipset with Intel ULV CPUs, which allows it to run full-blown Windows 8. That positions it squarely in-between the larger x86 Yoga 13 and the ARM-based Yoga 11, which makes it an ideal candidate for someone hoping for the best of both worlds. But can it survive the transition, or do its compromises outstrip its gains?

Our Yoga 11S came equipped with a fairly standard configuration: 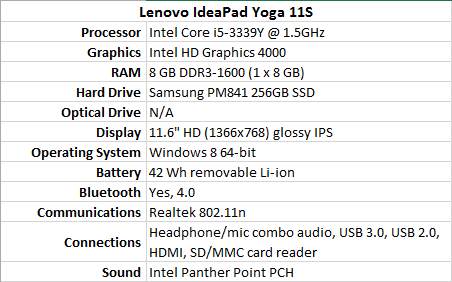 Unless you’re comparing to the Yoga 11’s specs, not much about this stands out. The Core i5-3339Y is the first thing that jumps out at you; in exchange for the nVidia Tegra 3 ARM-based SOC of the original Yoga 11, it’s a much more powerful chip with a 13W TDP and (thanks to its x86 architecture) the ability to run Windows 8 and standard Windows applications. Next on the list is the included 8 GB of DDR3 RAM—versus just 2 GB on the Yoga 11. Finally, there’s USB 3.0 and a much larger SSD (256 GB vs. 64 GB)—all valuable additions. One thing that hasn’t changed, meanwhile, is the battery size. Surely you’re wondering how this will affect the longevity of the notebook under typical usage. Patience; we’ll get to that in a bit! First, let’s talk about the general design of the notebook. 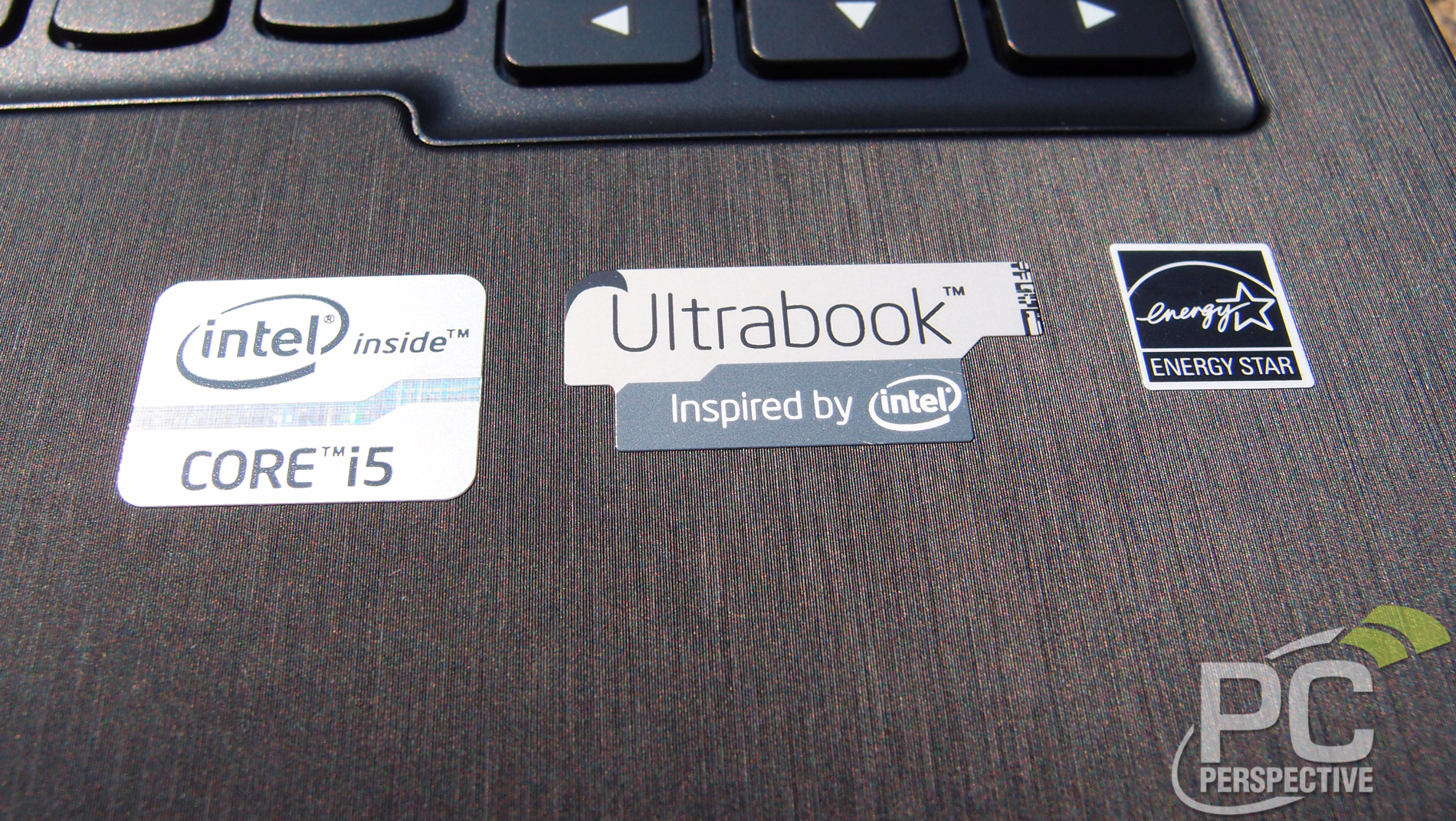 The IdeaPad Yoga 11S is almost a spitting image of its predecessor (the Yoga 11). If you look very closely, however, you’ll notice that there are a couple of subtle differences: first of all, it’s it’s ever-so-slightly thicker (0.69 in. vs. 0.61 in.), though it’s really difficult to tell. It’s also a bit heavier—3.02 lbs. vs. 2.62 lbs.—but again, these are highly portable and very lightweight models, so it isn’t much of a concern in the grand scheme of things. Two other small changes that have been made include the addition of a long vent along the rear edge to accommodate active cooling on the 11S (thanks to its higher TDP chipset) and a grooved rubber palmrest texture in exchange for the Yoga 11’s patternized rubber finish. With regard to the latter, we think the grooved texture looks better, but it most certainly also collects dirt and grime a little more quickly than the previous finish did. 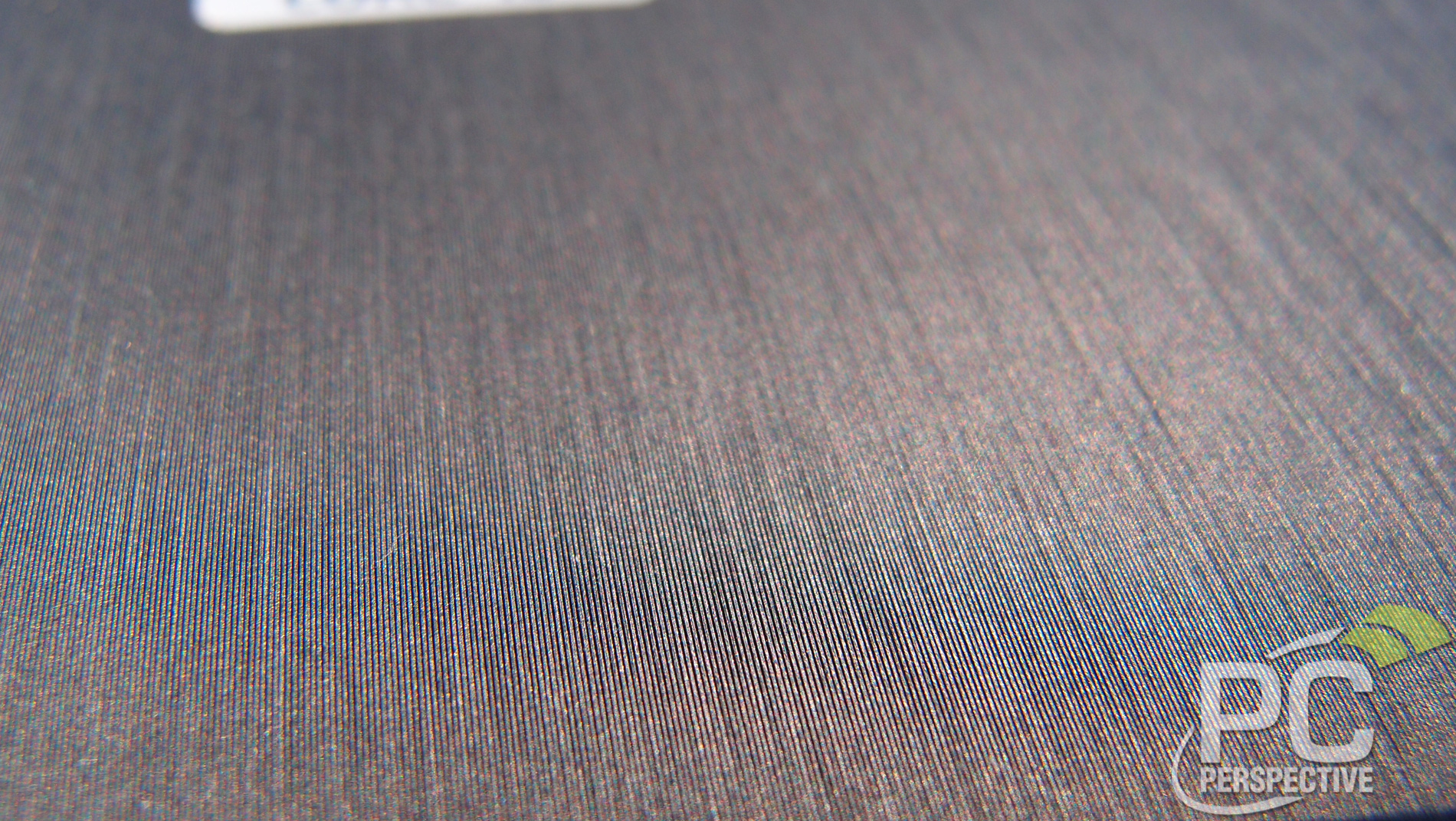 The rest of the construction remains pretty consistent. The notebook is almost completely comprised of plastic, with the stainless steel hinges being the only exception. However, it’s quality plastic, and it feels pretty sturdy, too, complimented by a superb fit and finish that feels more premium than the price point suggests. There is some degree of flex detectable on the base unit under pressure and especially when subjected to twisting, and the display lid feels much more fragile than nearly anything supported by a metal frame, but overall, the device still manages to exude a sturdy feel. 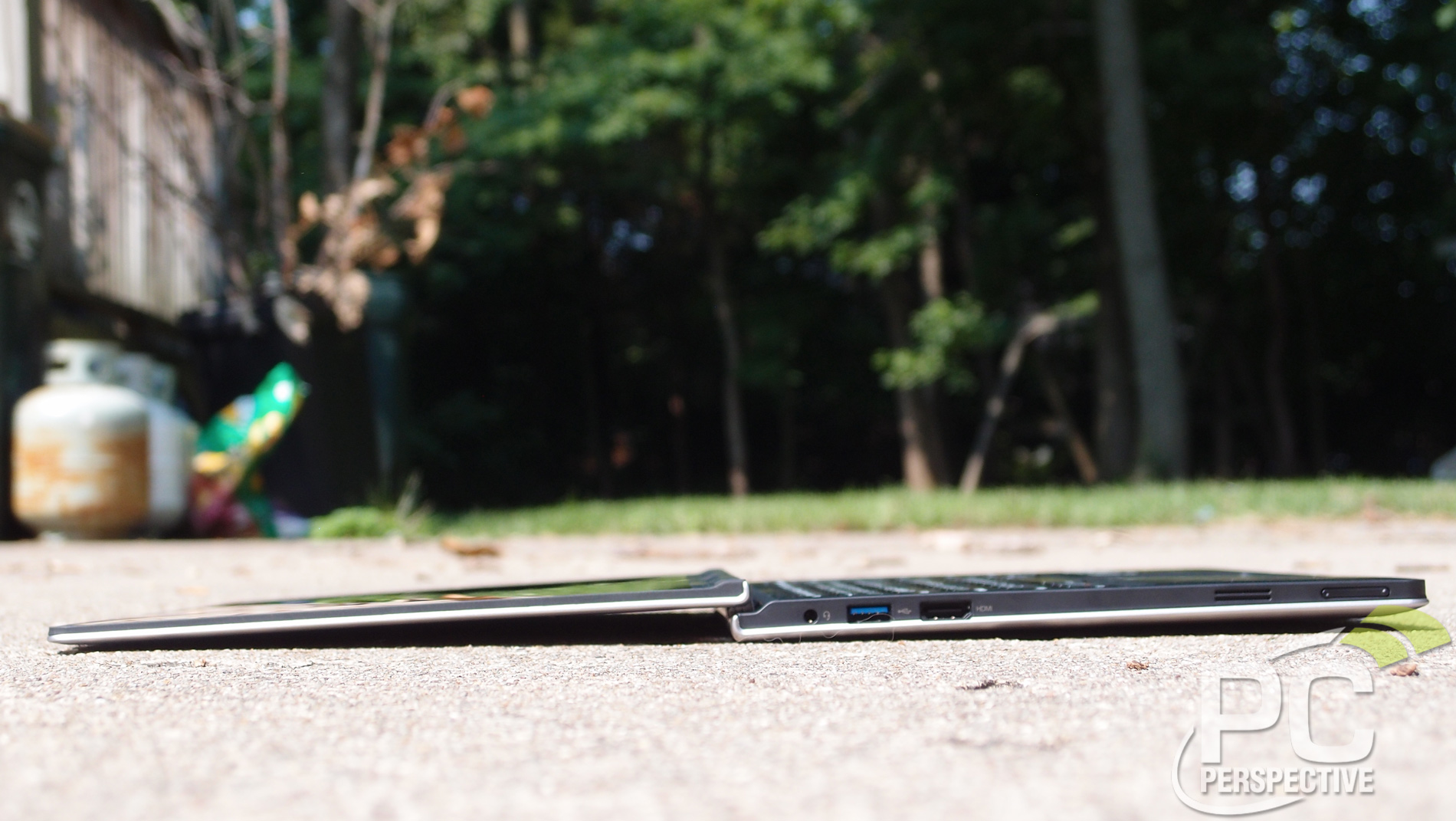 It’s also still covered with the same silver soft-touch rubber as the Yoga 11, which really looks metallic from a short distance. The entire unit is matte with the exception of the screen (whose capacitive touch properties mandate the usage of a glossy finish). On the inside, it’s really quite business-like in its presentation, though perhaps no more so than many other modern Ultrabooks (such as the Dell XPS 13), which also opt for matte, soft-touch black finishes. Regardless of the details, it’s a very nice-looking machine, and it looks and feels more expensive than it actually is. 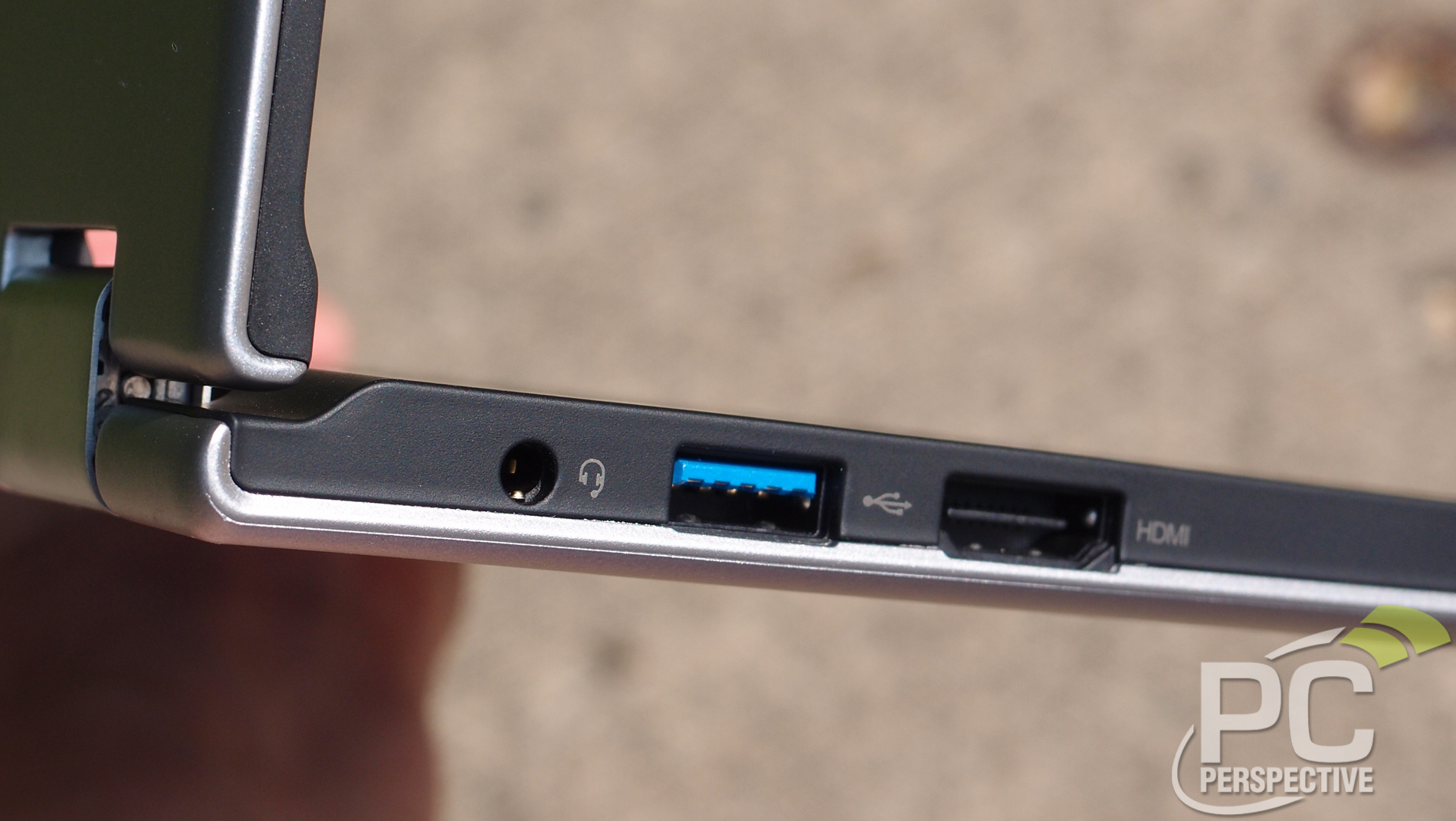 It’s hard to notice any difference in weight between the 11 and the 11S, but it’s considerably lighter and smaller than the Yoga 13. Still, it’s a pretty big tablet—so if you’re thinking of using it in that form often, you might think again. On the other hand, its ability to transform by rotating its screen underneath the base unit means that it’s much more versatile than your average convertible. Two other “forms” can be leveraged in-between the laptop and tablet states: Tent Mode and Stand Mode, both of which are operated like a tablet, but which do not require you to hold the unit to operate it. However, you do, of course, need a flat surface in front of you for it to work. Fortunately, in any situation where the screen is rotated beyond the 180 degree mark, the keyboard is automatically disabled—so although it feels a bit awkward at first, you at least don’t have to worry about accidental keystrokes in the meantime. 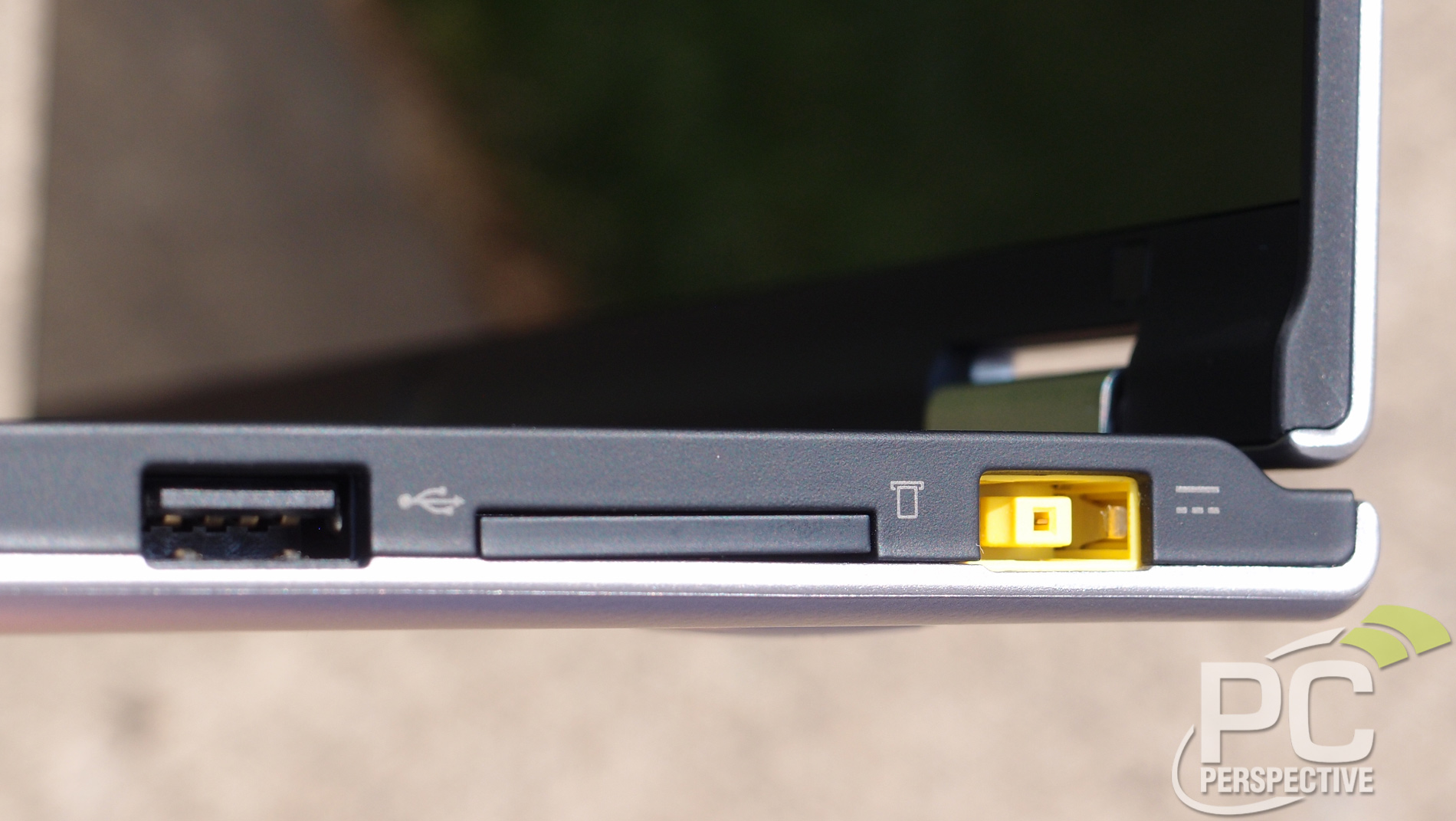 The port situation is also mostly the same, with one key difference: the inclusion of USB 3.0, which the Yoga 11 lacked due of the constraints of its chipset. In all, we get one USB 2.0 and one USB 3.0 port, a card reader, HDMI, 3.5 mm combo audio, and a newfangled rectangular charging port that has become the standard on emerging Lenovo notebooks. Also lining the edges of the notebook are a volume rocker, the power button, the Lenovo OneKey Recovery button, and finally, the screen rotation lock button. Of course, the reason for their positioning is that they are available in both notebook and tablet mode—with only Stand Mode proving a bit difficult for access to some of their functions. 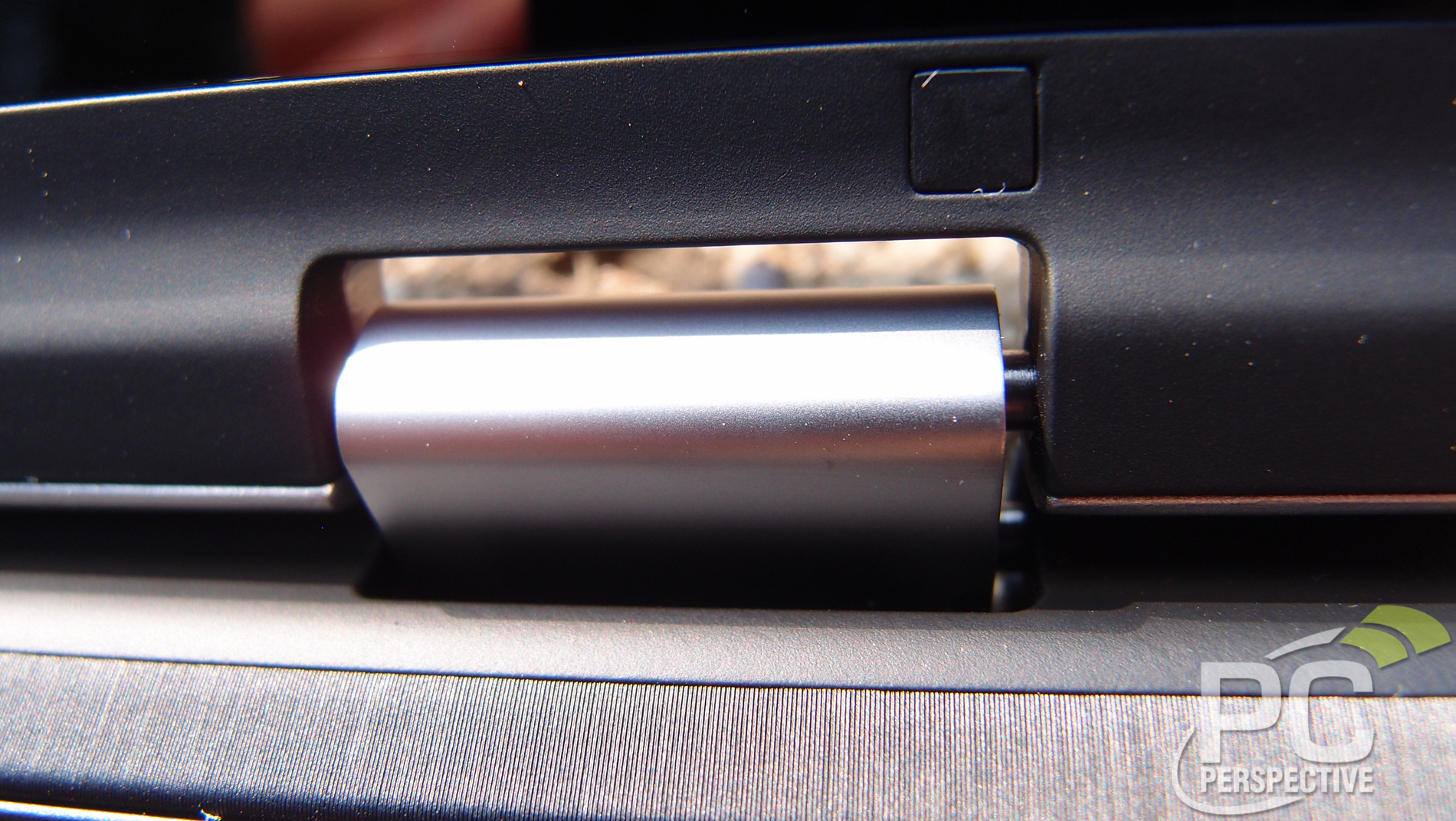 Finally, in terms of maintenance, the Yoga 11S isn’t very friendly. To access the internal components, eleven Torx screws must be removed from the bottom of the notebook as a first step. But if you need access to more than the RAM, that’s not all; next, the four rubber feet require removal to reveal additional screws, after which the keyboard and base unit can be detached. It’s hardly ideal, but on the other hand, considering the lack of a mechanical hard drive, it’s also unlikely that you’ll need to bother with this very often.

Before we move on, we thought you’d appreciate some photos comparing the Yoga 11 and 11S form factors: 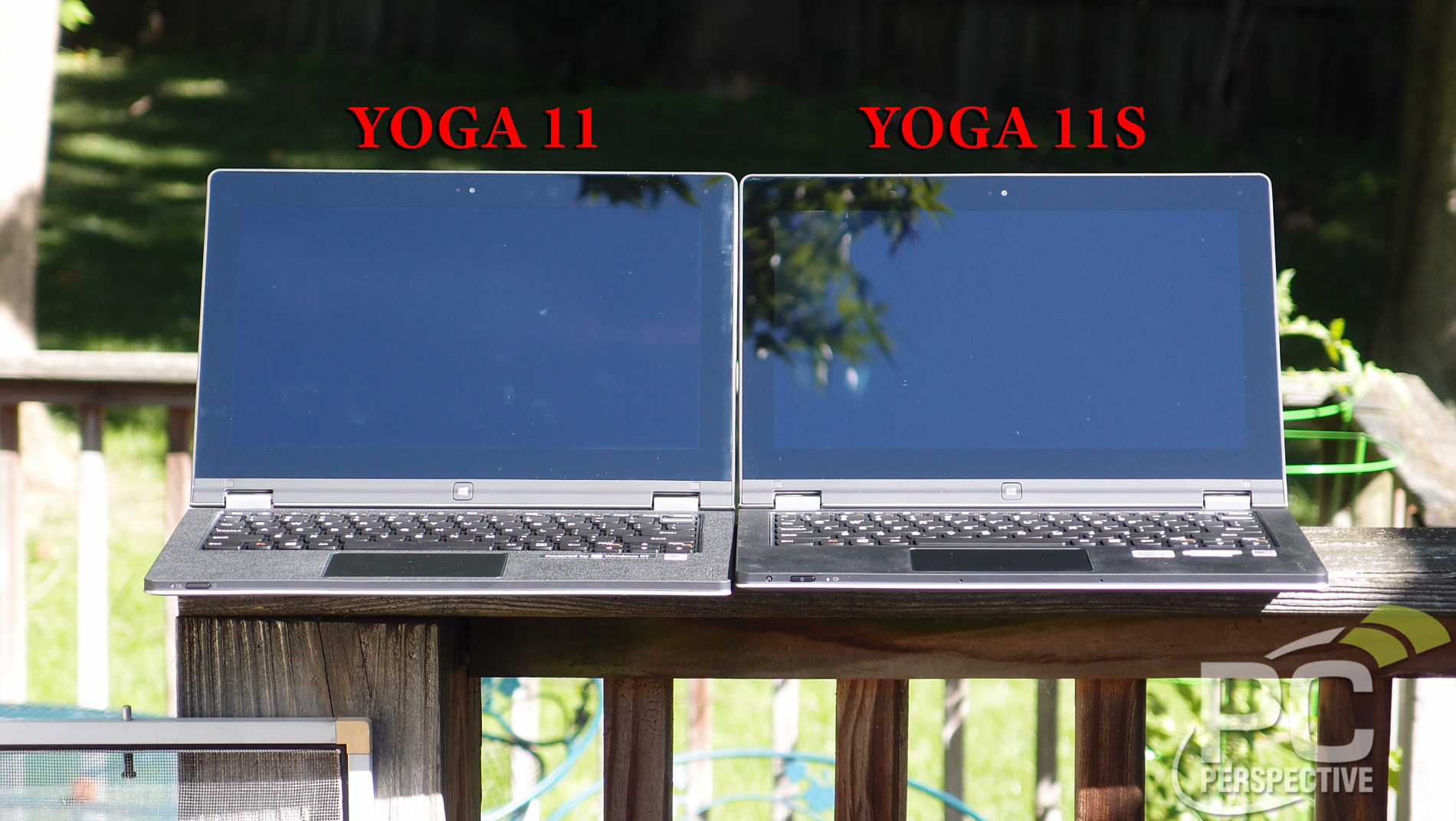 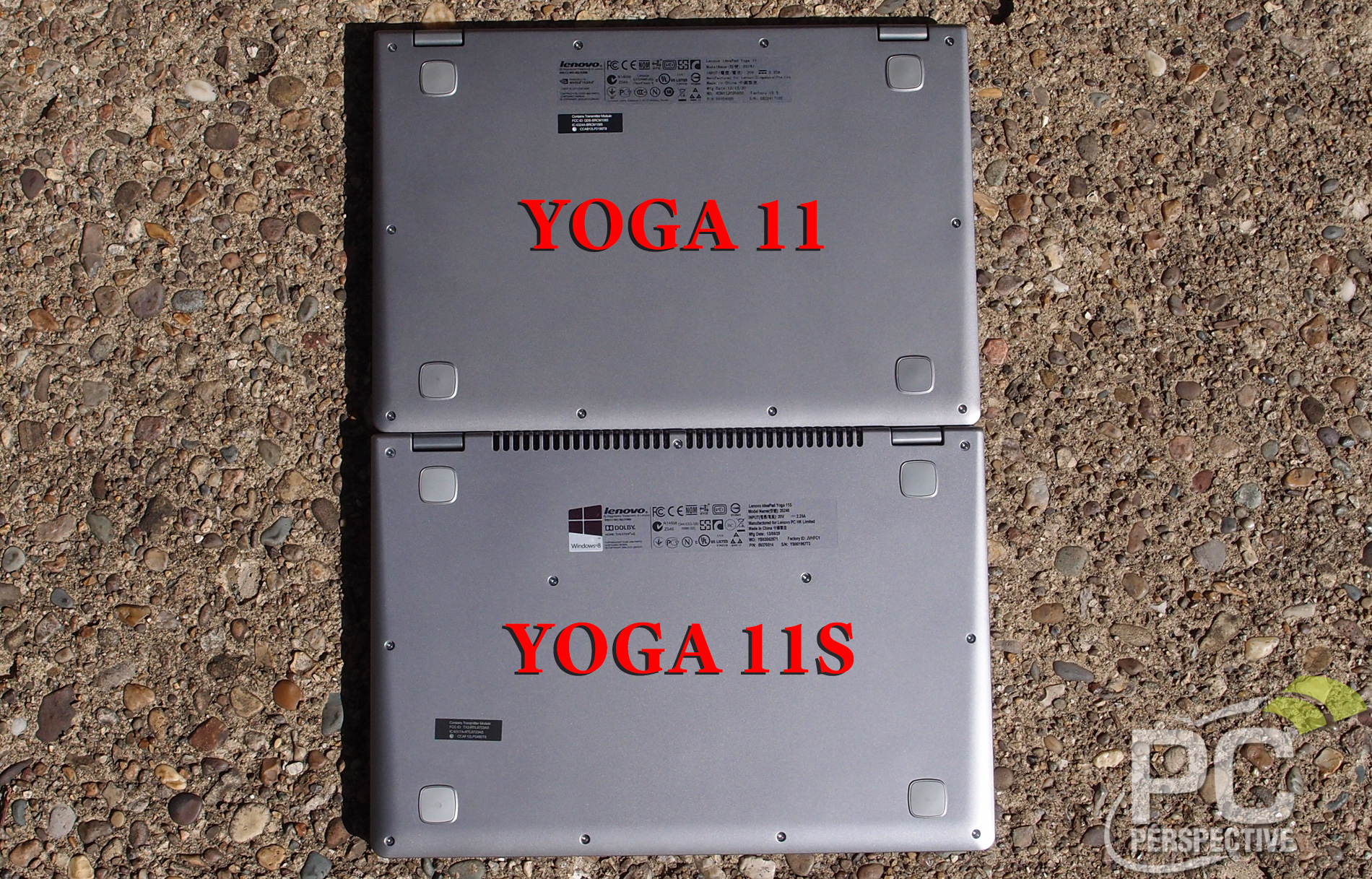 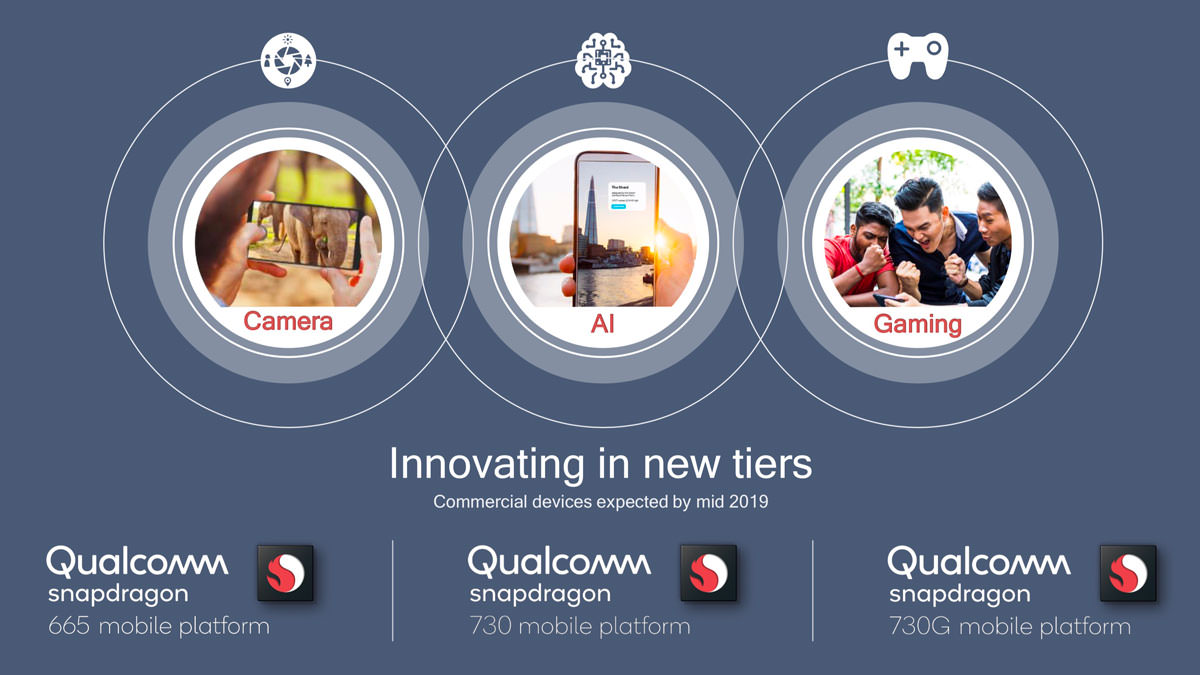