The MSI Lightning series of graphics cards is often described as one of the best for enthusiasts and overclockers.

Graphics cards are by far the most interesting topic we cover at PC Perspective.  Between the battles of NVIDIA and AMD as well as the competition between board partners like EVGA, ASUS, MSI and Galaxy, there is very rarely a moment in time when we don't have a different GPU product of some kind on an active test bed.  Both NVIDIA and AMD release reference cards (for the most part) with each and every new product launch and it then takes some time for board partners to really put their own stamp on the designs.  Other than the figurative stamp that is the sticker on the fan.

One of the companies that has recently become well known for very custom, non-reference graphics card designs is MSI and the pinnacle of the company's engineering falls into the Lightning brand.  As far back as the MSI GTX 260 Lightning and as recently as the MSI HD 7970 Lightning, these cards have combined unique cooling, custom power design and good amount of over engineering to really produce a card that has few rivals.

Today we are looking at the brand new MSI GeForce GTX 780 Lightning, a complete revamp of the GTX 780 that was released in May.  Based on the same GK110 GPU as the GTX Titan card, with two fewer SMX units, the GTX 780 easily the second fastest single GPU card on the market.  MSI is hoping to make the enthusiasts even more excited about the card with the Lightning design that brings a brand new TriFrozr cooler, impressive power design and overclocking capabilities that basic users and LN2 junkies can take advantage of.  Just what DO you get for $750 these days?

As the name might let on, MSI's update to the Frozr cooling series uses a set of three fans rather than two with some interesting additions like independent controllers and targets. 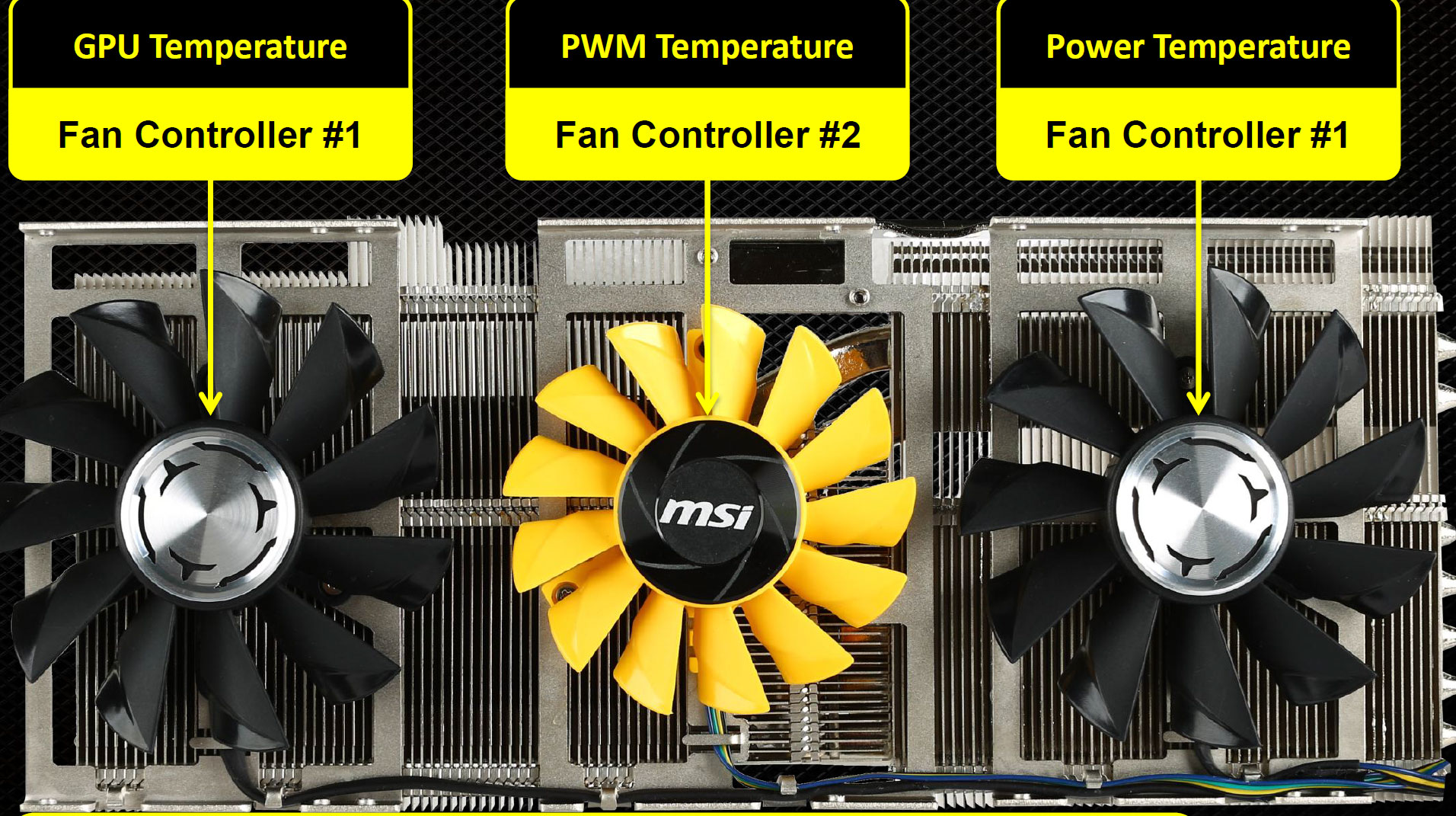 The outside fans are 90mm while yellow, interior fan is smaller at 80mm.  Both black fans are controlled by one fan controller while the center one has its own for better flexibility depending on which components need the most cooling at any given time.  By separating the controllers MSI can lower noise levels by only increasing fan speeds when necessary.

The left fan currently links directly to the GPU temperature, the center fan the PWM temperature and right fan is connected with the power temperature.  Obviously since both 90mm fans are controller by a single voltage line, an increase in temperature at either the power of GPU temperature points will cause fans to spin more quickly.

These fans also continue to use the MSI Propeller Blade technology that can move a lot more air at lower fan speeds (and hopefully noise levels) than competing fans. 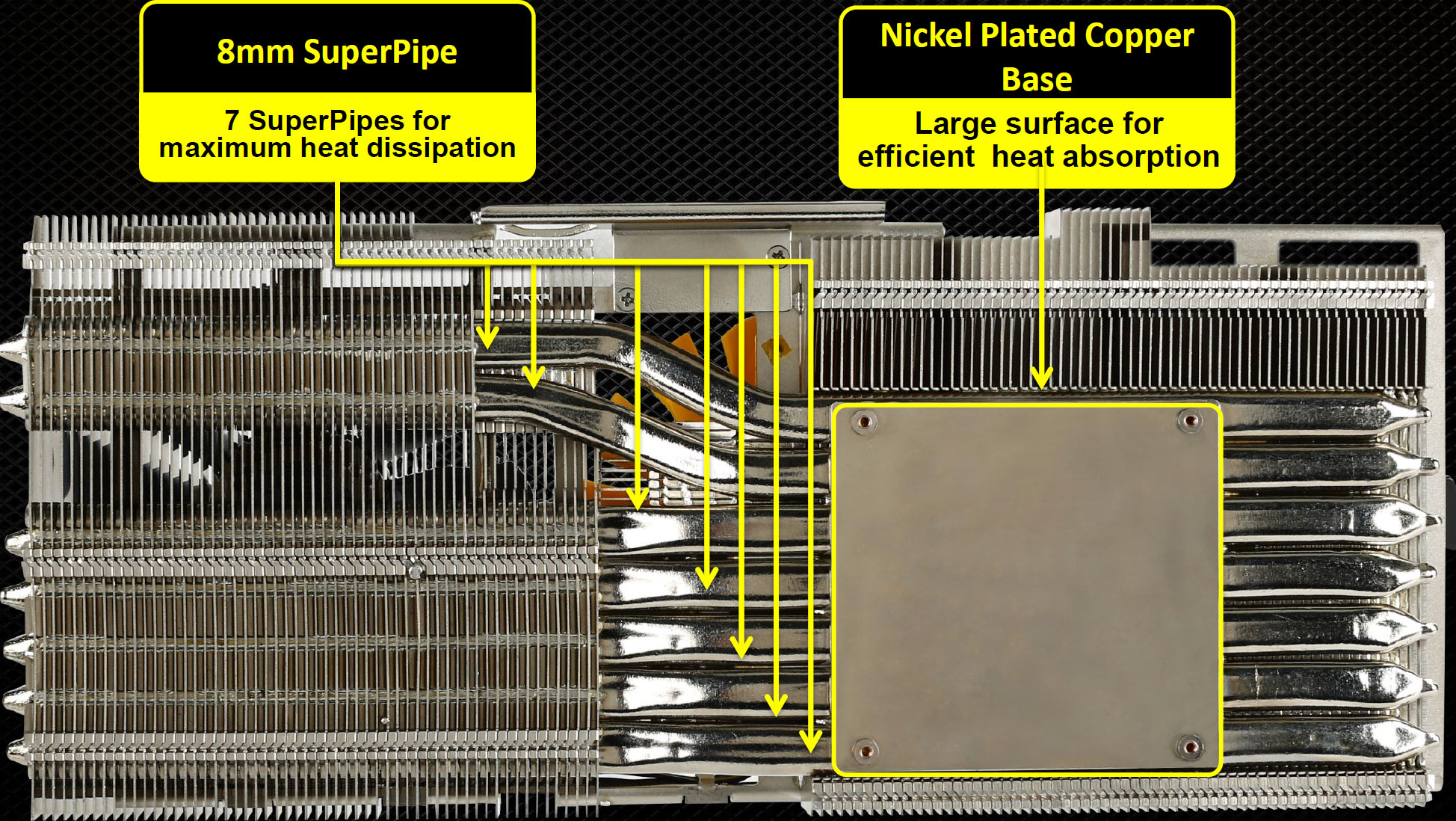 A heatsink capable of 550 watts of dissipation is at the heart of the TriFrozr cooler and includes 7 8mm SuperPipes to draw heat from the GPU out to the fins.  The base of the cooler is nickel plated copper and is a HUGE surface – GK110 is no small piece of silicon. Obviously a 550 watt limit is pretty extreme here and leaves plenty of room for overclocking and overvolting.

MSI has integrated two additional heatsinks on the front and back of the PCB.  The top heatsink covers the VRM modules and memory chips while the back heatsink does some work by dissipating the heat from the rear of the VRM components.  Another benefit of the back heatsink is that it adds a lot of strength and rigidity to the card preventing flexing while installed.

Inside the fin array of the TriFrozr is a groove that MSI claims will help prevent "dead air" situations that can stagnate air movement over so many surfaces.  With the issues that AMD's Radeon HD 7990 has had in some installations with air movement it is nice to see MSI address this ahead of time as it is also using a three-fan cooler. 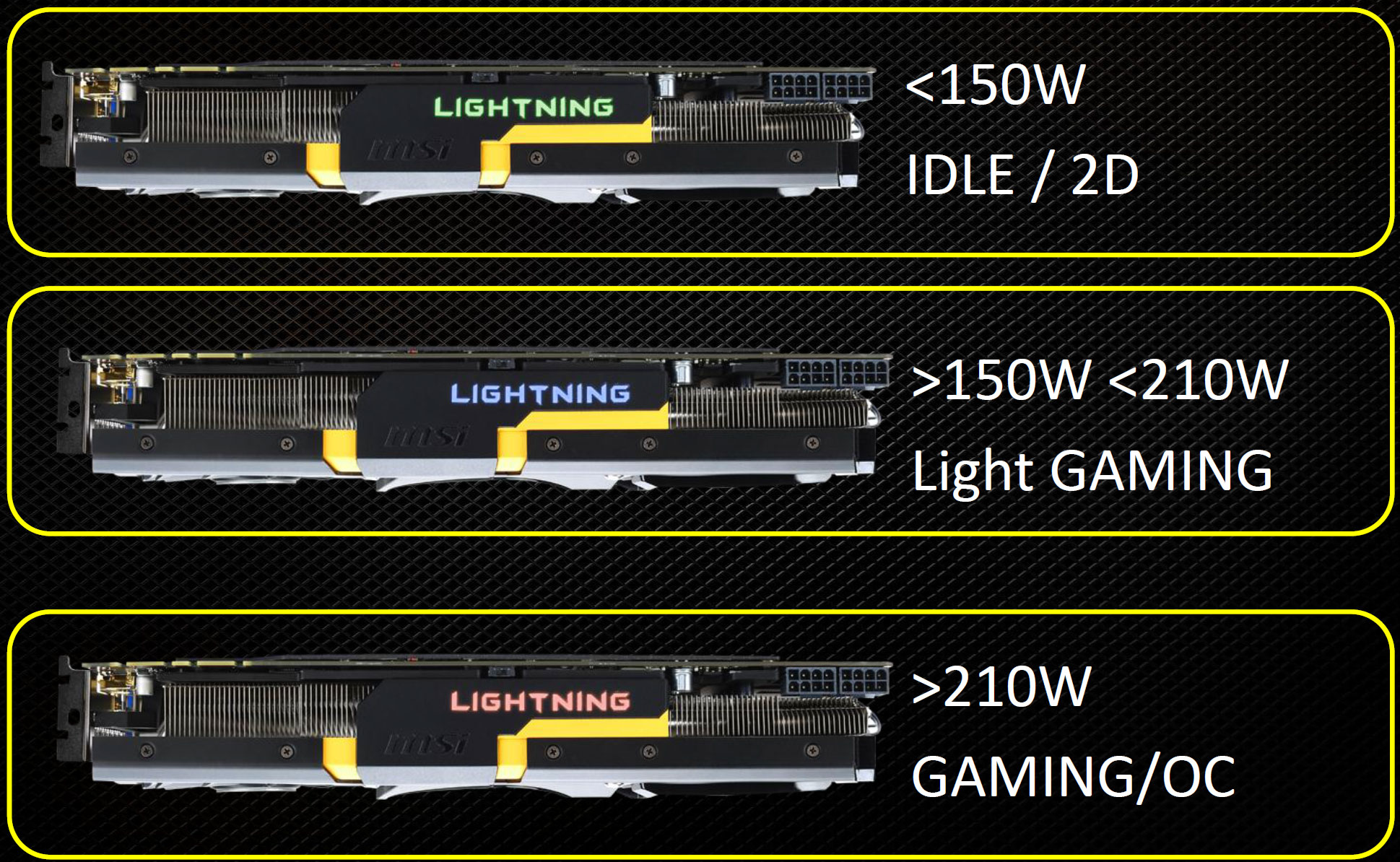 At the top of the heatsink shroud you'll find an LED light that illuminates the word "LIGHTNING" and also indicates load levels in one of three states.  I find it interesting that MSI chose to use power consumption as the key factor here and I would also like to see them add support for adjusting those factors in software. 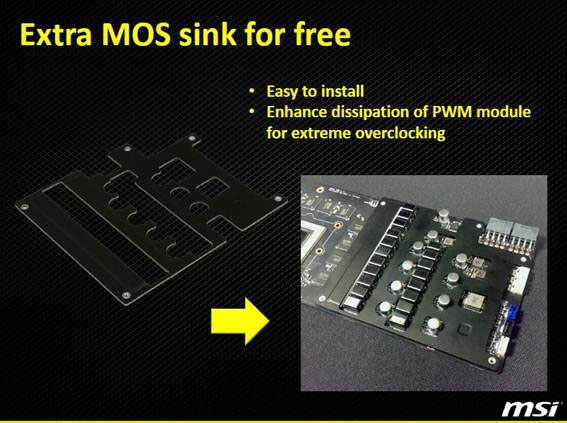 In the box MSI has included an additional MOS heatsink that goes over the power components on the right hand side.  While easy enough to install, why MSI didn't just add this to the default cooler confuses me.  Actually this heatsink is used if you remove the stock cooler and install either LN2 hardware or water cooling.