After a great cooler design the next step in building a great custom graphics card is to customize the PCB and power delivery in interesting and useful ways.  MSI has stepped up the both of these areas on the GTX 780 Lightning. 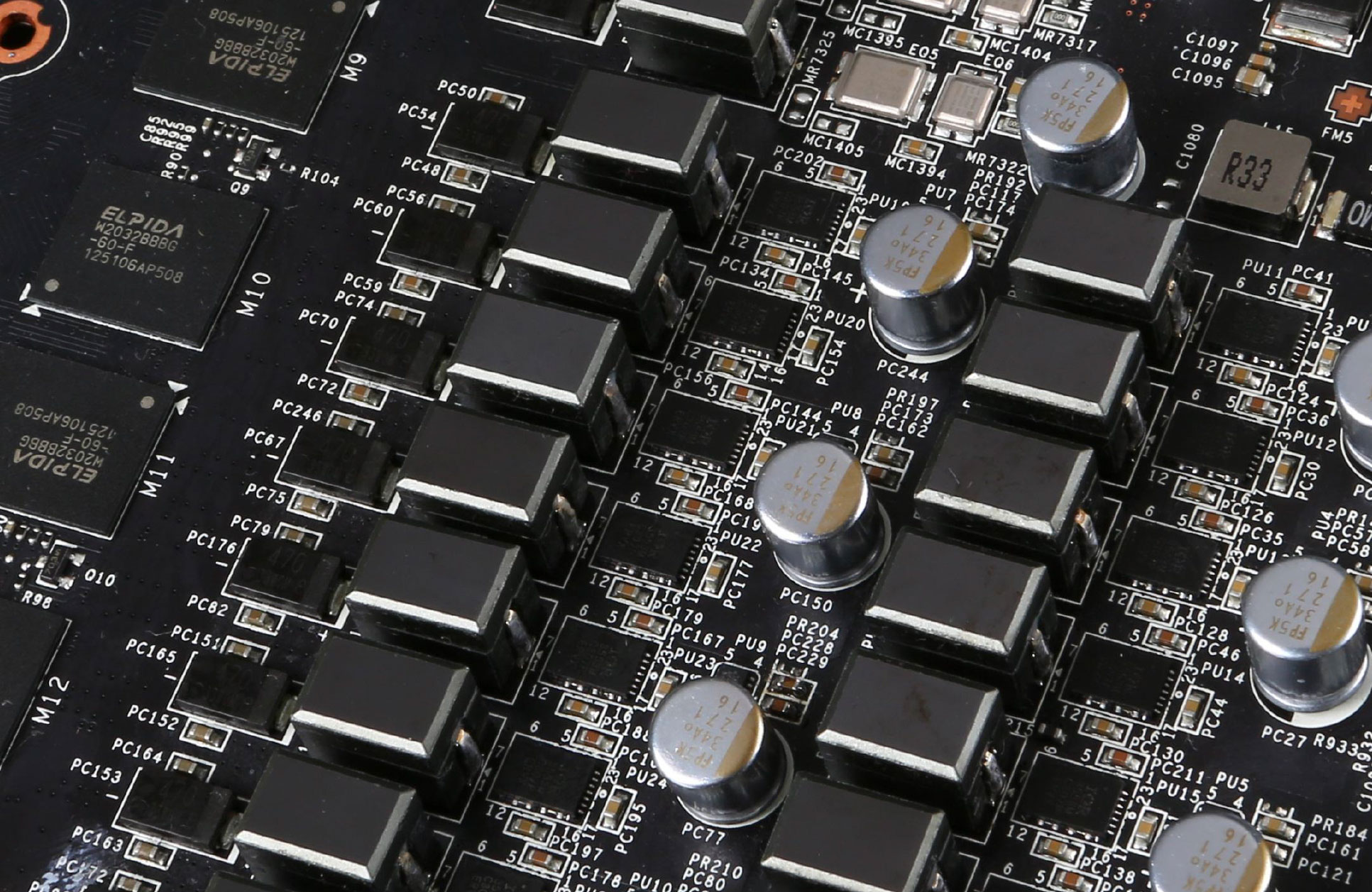 All of the critical power delivery and regulation hardware is using what MSI calls "Military Class 4" components that are high quality and over designed for the stress of overclocking.  Included on the GTX 780 Lightning are dark solid capacitors, DrMOS4 MOSFETs, updated super ferrite chokes and Hi-C capacitors rated at 93% efficiency.  If these components seem familiar then you have probably read about MSI's Z87 M-Power motherboard that utilizes the same parts. 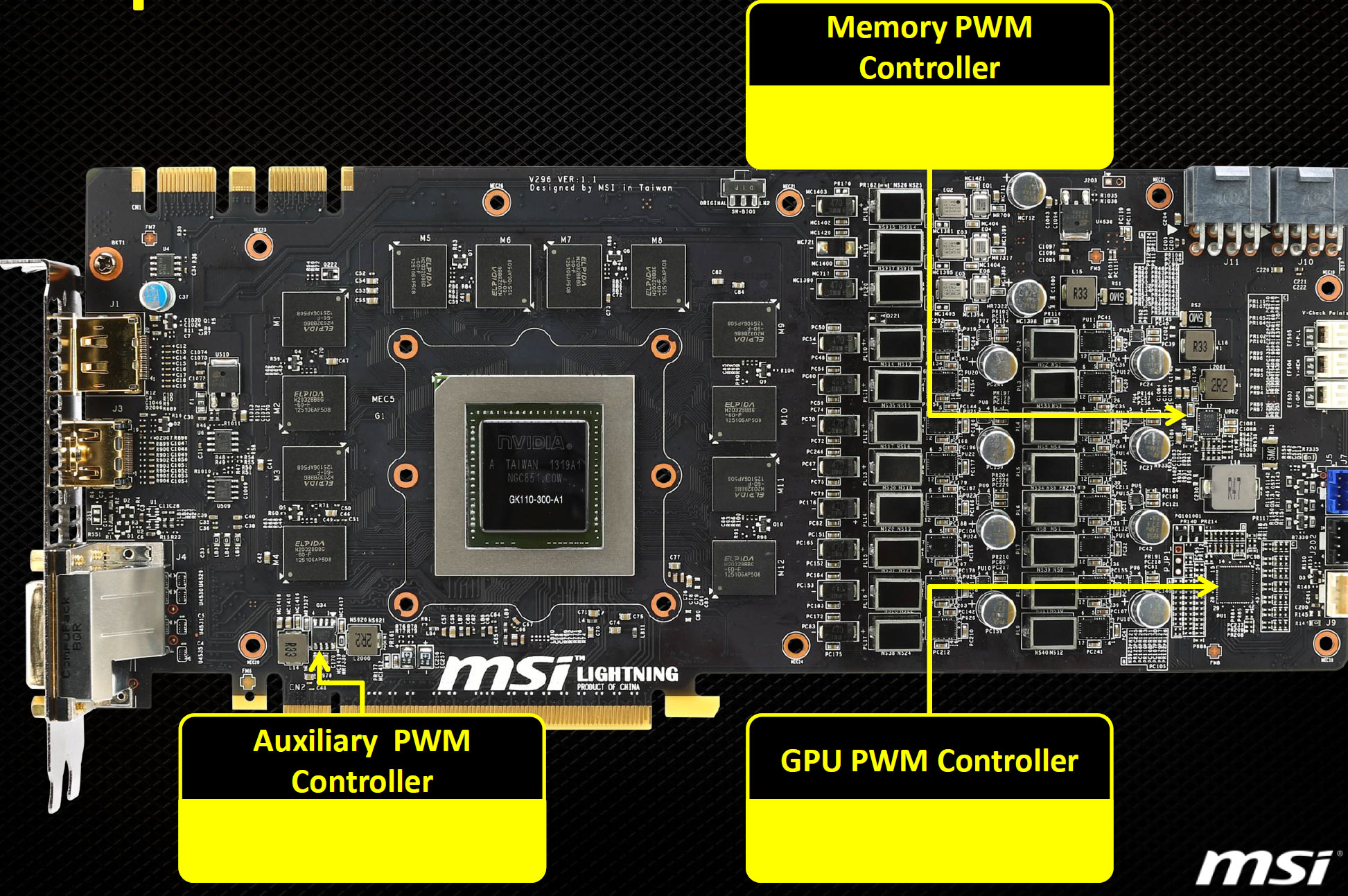 The Lightning was built with a triple PWM controller design; one for the memory, one for the GPU and an auxiliary.  By altering the path of incoming power so that both the GPU and memory get power exclusively through the power supply PCIe connectors, MSI claims to reduce noise and ripple on the memory to help with overclocking headroom.  It also can lower the stress on the motherboard power delivery (through the PEG slot). 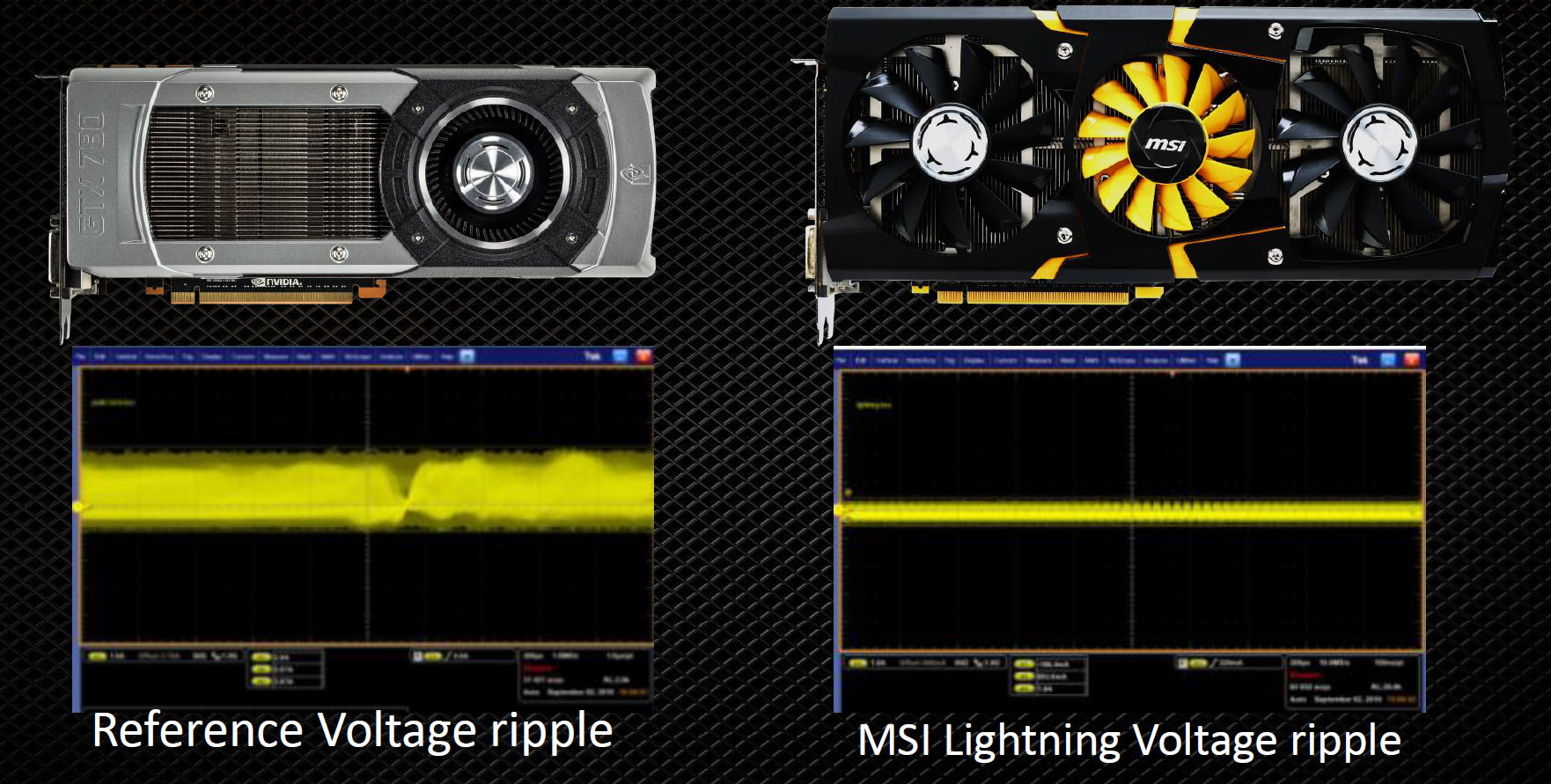 This triple PWM design also multiplexes the signal with double feedback loops and creates a more stable delivery circuit.  The result of all of this is a smaller voltage ripple that fluctuates less during load.  In theory, this should mean better stability and higher overclocking limits. 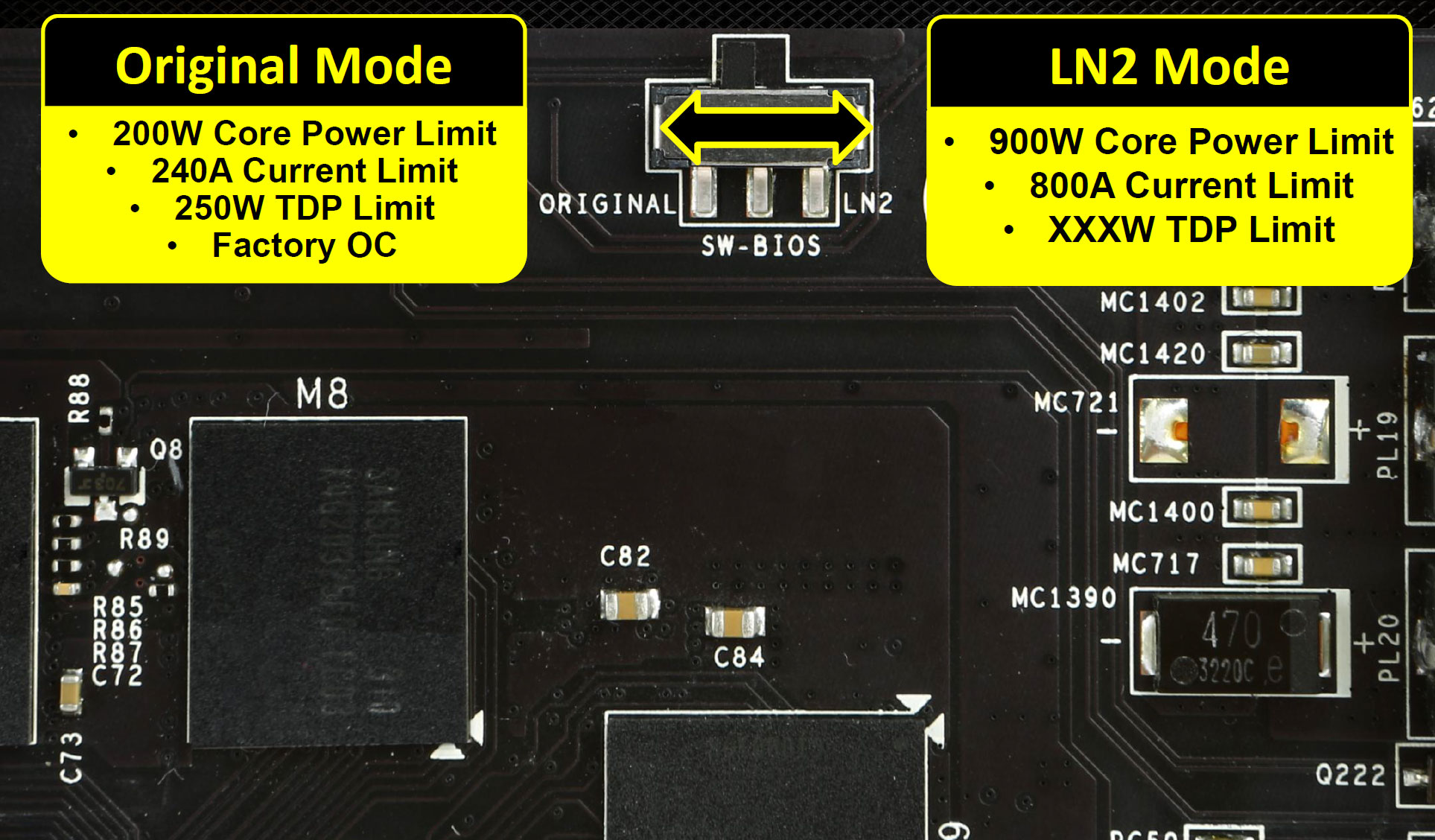 That not enough for you?  MSI has included a switch on the top of the GTX 780 Lightning that switches between the standard operating mode and an LN2 mode that removes limits on core power, amperage and TDPs.  I am interested to see NVIDIA's response to this as they have been very tight lipped about voltage changes on Kepler graphics cards and I saw more than one previous instance of card functionality getting shut down. 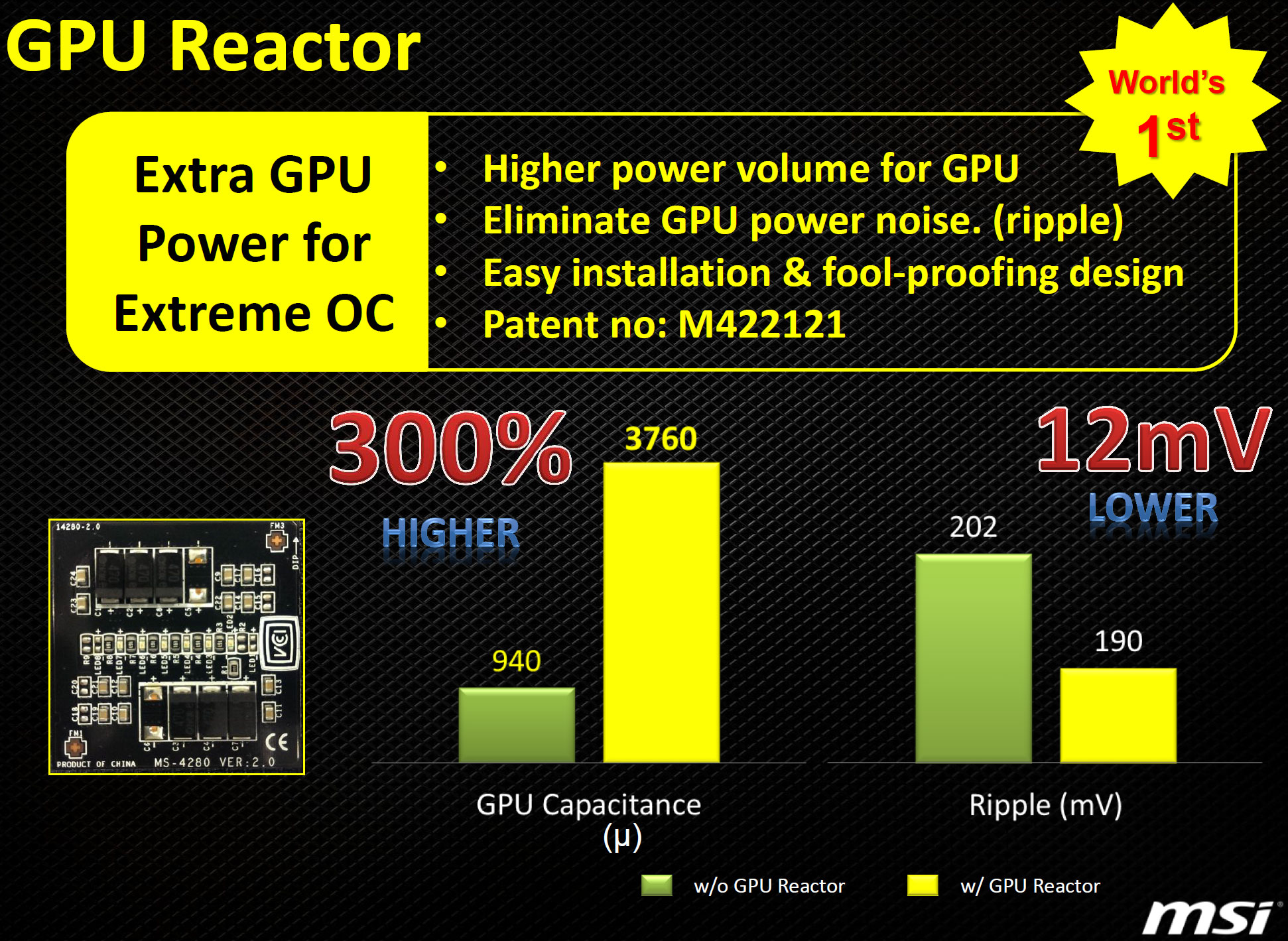 On the back of the GTX 780 Lightning, as we saw with several previous Lightning designs, MSI has included its GPU Reactor.  This concentrated cap design provides extra power, and extra clean power, directly behind the GPU and it has 300% more power volume (capacitance) than the reference builds. 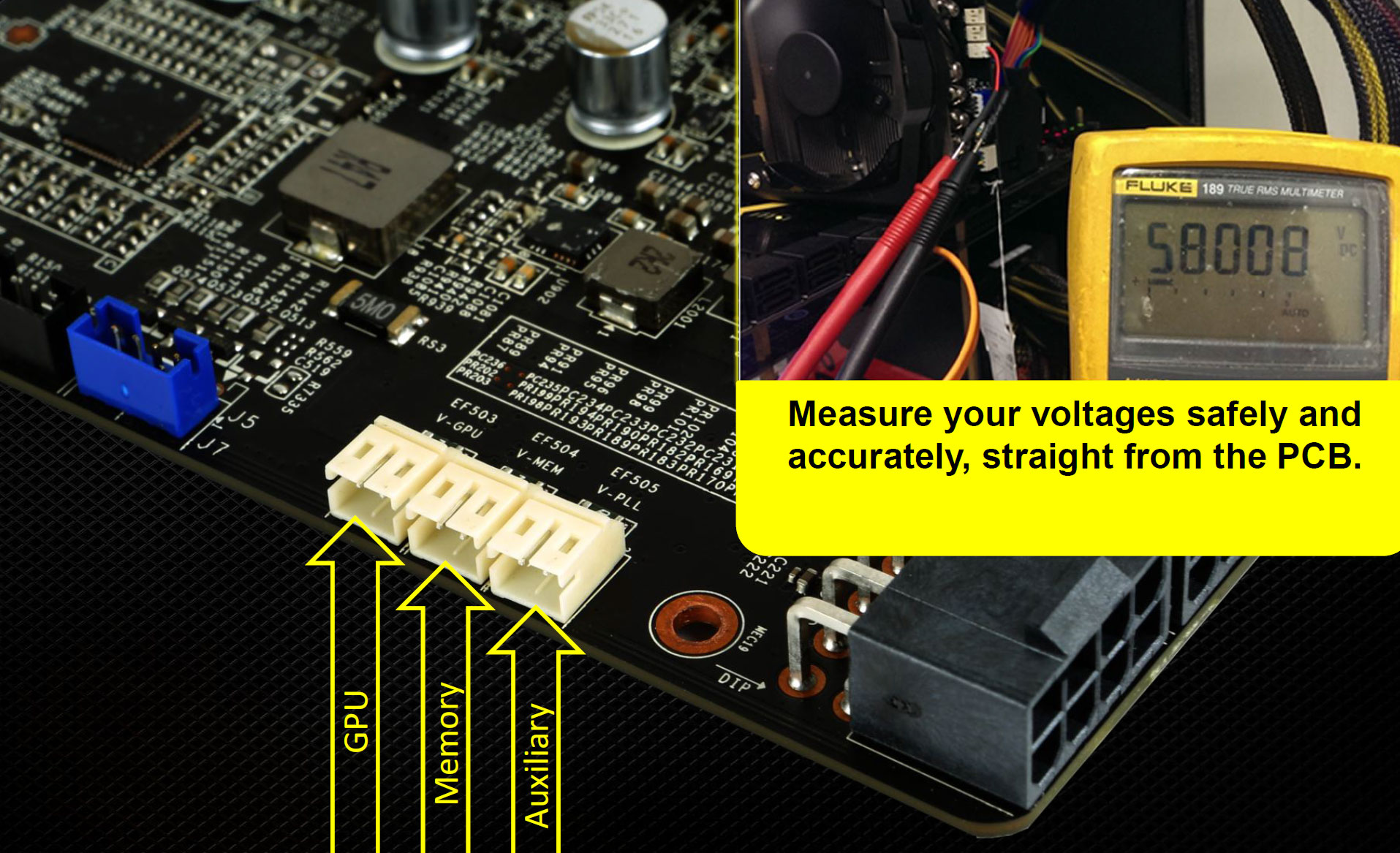 For overclockers MSI has provided a solid set of tools and options for them to take advantage of, either for LN2 users or the more common air cooling weekend warriors.  First up are the V-Check points that allow you to directly measure the voltages of the GPU, memory and auxiliary lines with a common volt meter.

Next, MSI has updated its Afterburner software to support the GTX 780 Lightning and provide three different voltage tweaking settings without having to modify any hardware.  Again you can turn dials for the GPU, memory and auxiliary voltage lines though they are somewhat limited (likely due to the same NVIDIA restrictions mentioned before).  Still, adding 35 mV of power to the GPU can help take an overclocked setting on the edge to stable state.

Finally, you can monitor the temperatures of specific voltage locations as well – memory, GPU and VRM – all right in the Afterburner software.