So now that you know about the technology in the MSI GTX 780 Lightning let's break into the card itself. 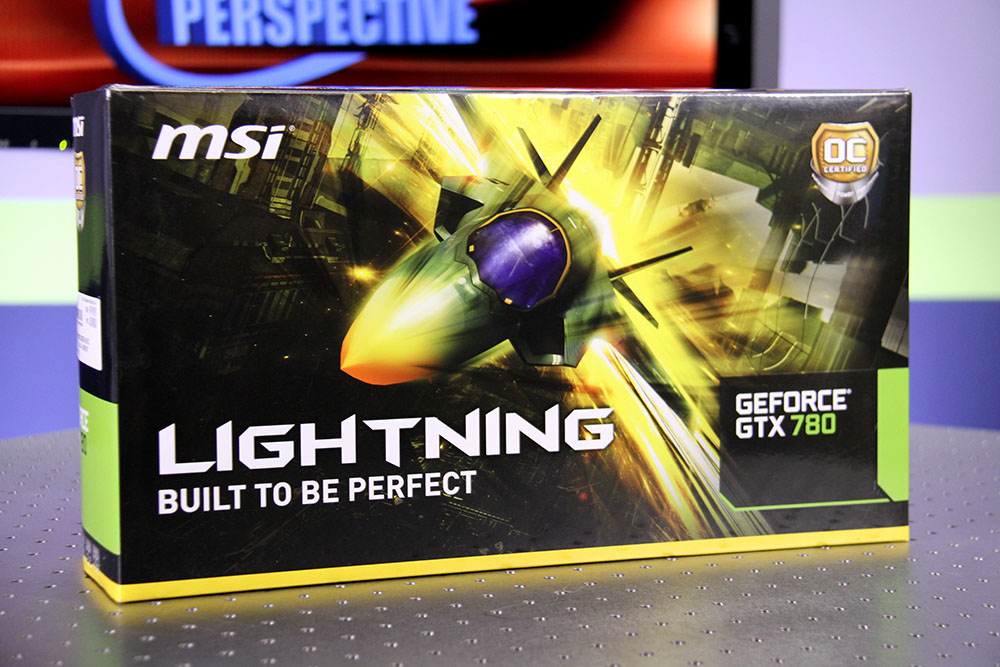 The box pushes the yellow and black design that MSI has adopted with their high-end motherboards as well and I do find it pretty attractive despite having an aversion to the Pittsburg Steelers.  NVIDIA may not like the lack of GREEN on the box but that is the price you pay to work with great partners!

Of course the MSI GTX 780 Lightning comes overclocked out of the box.  The GPU base clock is set at 980 MHz and the boost clock at 1033 MHz.  That is 14% higher than the stock base clock of 863 MHz and should provide a nearly linear performance increase.  The memory speed does remain the same at 6.0 GHz.

Pricing on the MSI Lightning card will start at the MSRP of $749 which is a $100 premium over the reference design cards on the market. 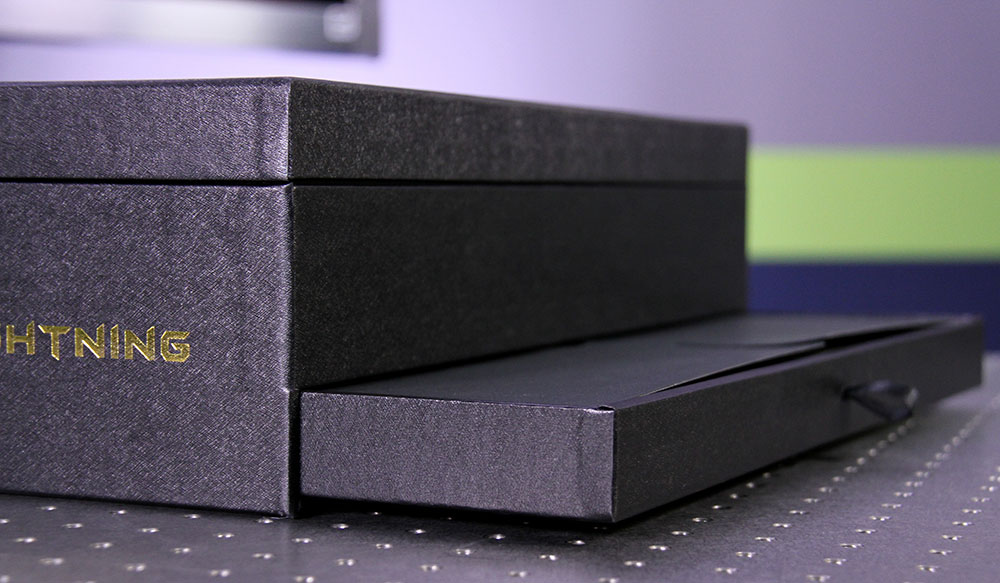 The actual box has a cool design that includes a drawer on the bottom that holds the driver disk and accessories. 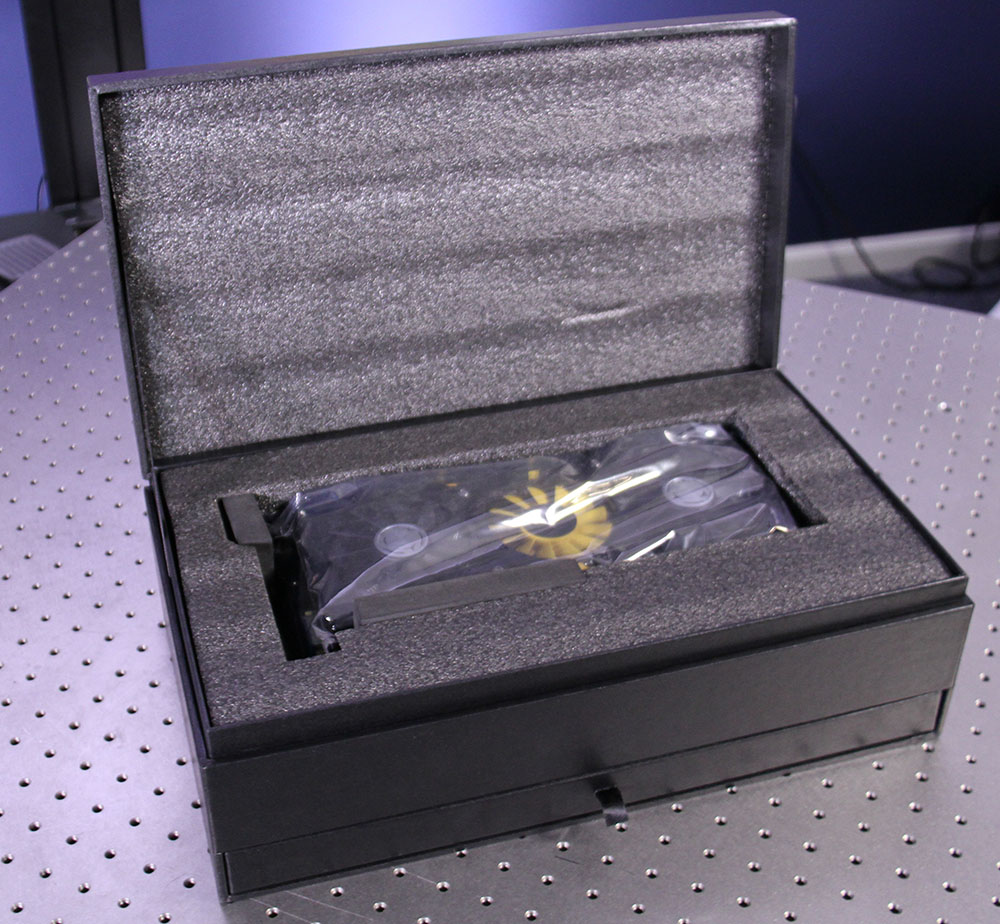 Lifting the box top reveals the GTX 780 Lightning in all its glory, waiting to be released from the constricting anti-static bag! 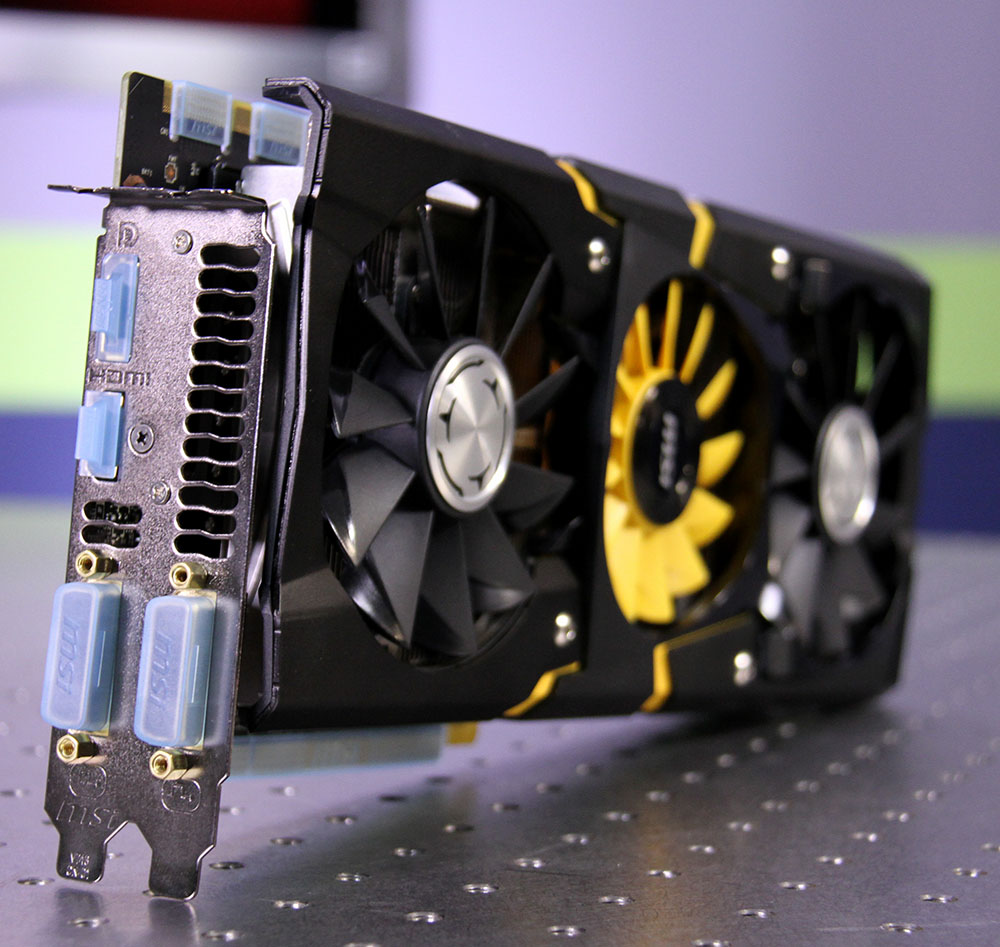 Even though the card LOOKS like it has a two slot design, keep in mind that it WILL take up three slots or you risk rubbing the fan blades against the back of another expansion card.  That kind of sucks you have a full system or maybe are using a mATX chassis so keep it in mind if you are looking at this card.

Display connections for NVIDIA cards having really settled on this arrangement: two DVI connections, a full size HDMI and DisplayPort.  Honestly though, this is my favorite arrangement and I'm glad to see it sticking.  You can see the three fans of the TriFrozr design here as well and if you like the black and yellow color scheme then this should be right up your alley. 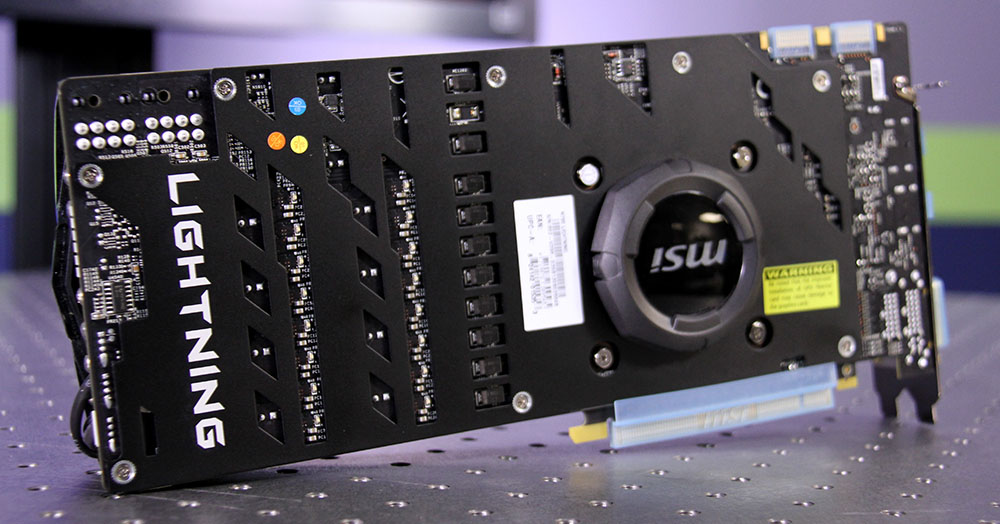 The back of the card shows us the rear heatsink and stiffening plate as well as the plastic cover over the GPU Reactor components.  Keep in mind again that the plastic dome does stick out a bit and COULD be an issue if you have a very odd heatsink design or arrangement on your motherboard. 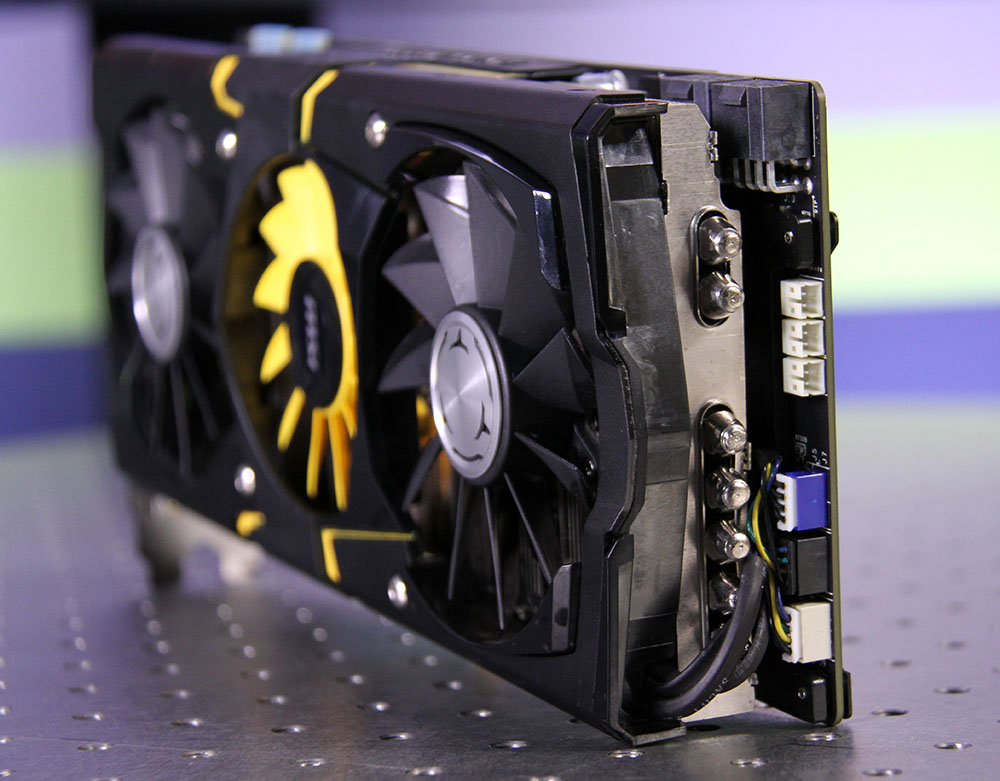 Here you see the location of three voltage monitor points – MSI does include voltmeter ready leads in the box.  Also note the terminating ends of all 7 of the SuperPipes. 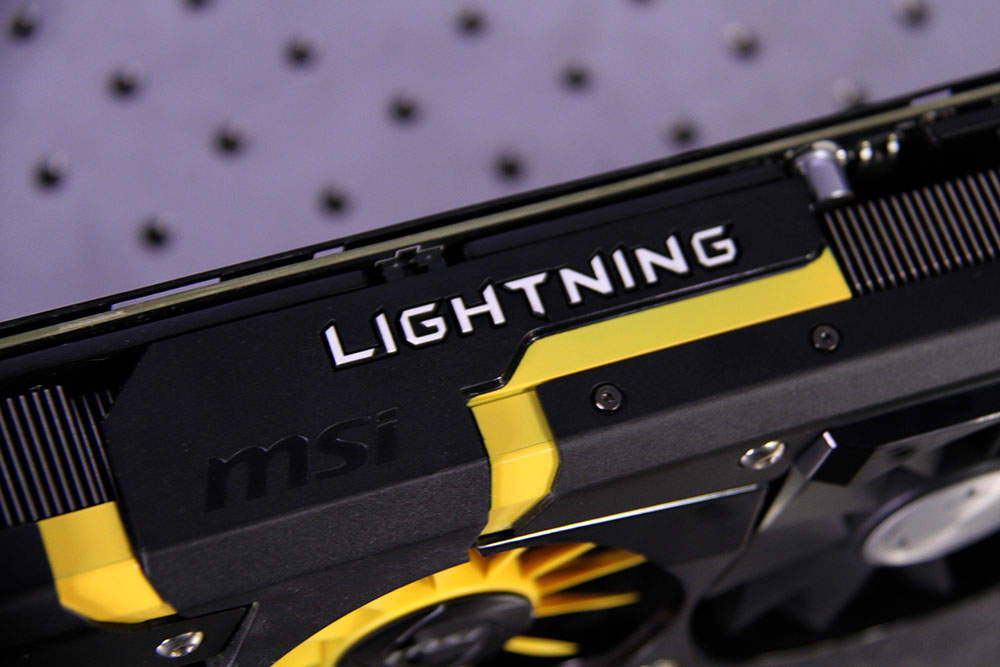 Up top we find the LIGHTNING indicator that is color coded and LED backlit when turned on.  The font here is actually a little smaller than I expected. 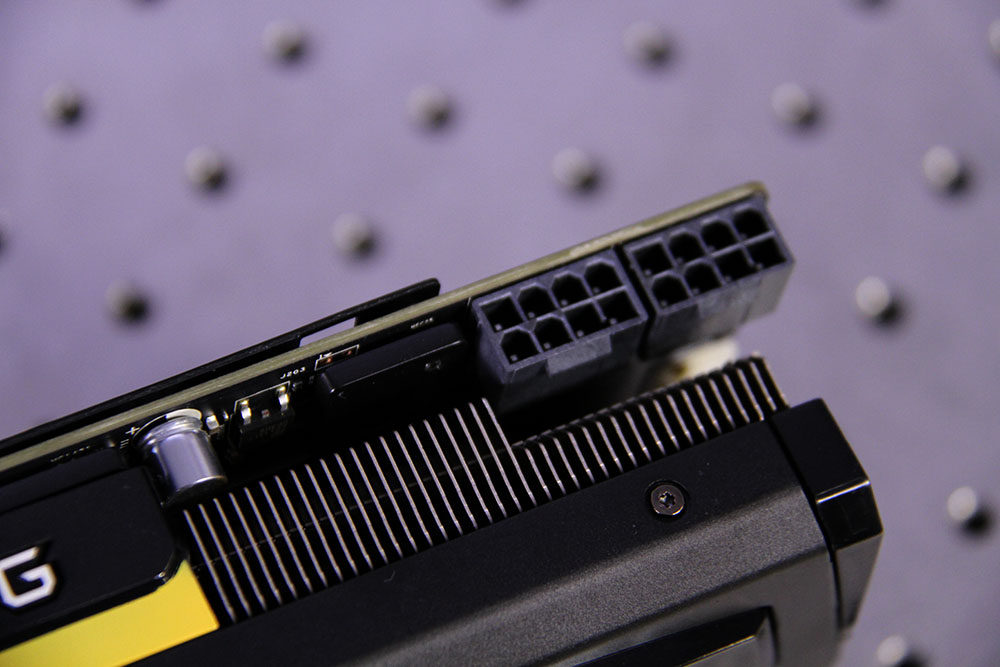 The MSI GTX 780 Lightning requires a pair of 8-pin PCIe power connections, a step up over the 8+6 design of the reference GTX 780.  MSI definitely puts that extra power to good use though. 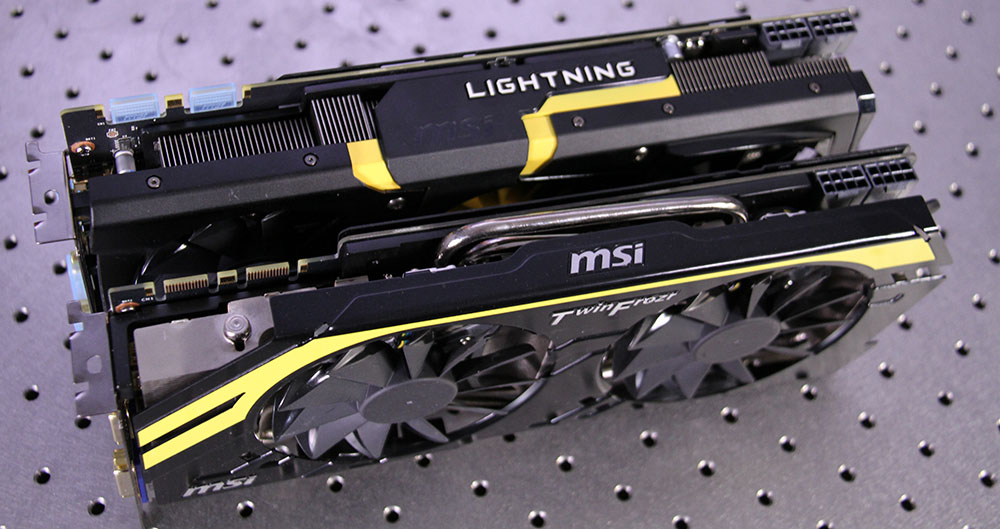 For reference, this image shows the GTX 770 Lightning on the right and the new GTX 780 Lightning on the left.  Clearly MSI has stepped up with the new design, shrinking the size of the card quite a bit without sacrificing any of the component design or power delivery.  We'll test the efficiency of the fan and cooler in the coming pages!