A Roman of a different colour 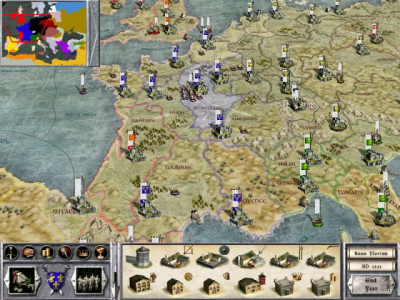 The Total War series has come a long way, from campaign maps that played like a Risk game and cloned troopers in the battlefield to gorgeous landscapes with much more realistic movements and incredibly detailed units in battles.  On the other hand the long awaited next installation of Rome: Total War might have gone a bit too far.  It is not necessarily the obscene amount of time it takes to process the AI's turns nor the inevitable bugs that crept through the QA process; the ability to easily distribute 100MB patches has degraded every publishers QA process to a joke when you compare it to the days of dial-up.  Instead it is the realization that the niggling feeling as you push the End Turn button that you have left something undone is caused by the fact that you did nothing that turn at all.  The campaign map in Total War has never been fast paced nor is it meant to be, instead there had always been a million micromanagement tasks to be completed every turn whereas in this new Rome you often have nothing to do but bash on the end turn button for a few seasons.

It is as Rock, Paper, SHOTGUN comment "I feel that Total War should be a coiled armadillo rather than Rome IIs jellyfish."

"So then. I am usually in the Total War apologist camp, but not this time. I am not sure if it’s because I had a better experience with Shogun 2, or whether there’s some kind of allergy due to over-exposure going on, but Rome II rubbed me up the wrong druid."

Summertime at the PC Perspective Forums