The hits just keep coming from ASUS this morning with the announcement of a new ultraportable notebook with the ambiguous name of X102BA. Though the name might not be catchy the device itself is more interesting because of the hardware that is powering it, specifically an AMD Temash A4-1200 APU.

This marks one of the few highly visible systems being powered by the AMD Temash architecture and I will be very curious to its reception.  The APU itself is a dual-core part that runs at 1.0 GHz with integrated Radeon HD 8180 graphics that is more than enough for a modest Windows 8 working environment.  There is a quad-core variant of Temash available but ASUS decided to go with the dual-core option.  If you need more information on the new architecture that AMD created for Kabini and Temash (based on Jaguar CPU cores and GCN GPU cores) then you should see our coverage from their announcement back in May. 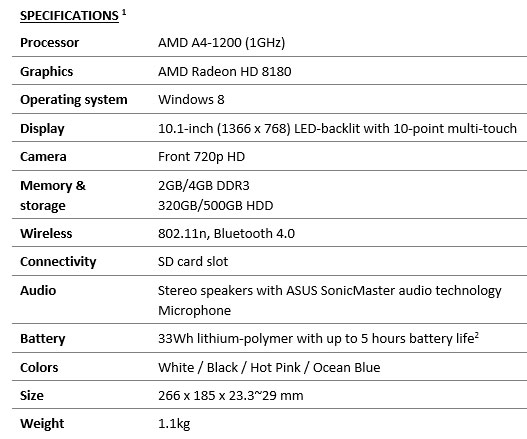 Even though the battery life is only listed at 5 hours, the 2.4 pound weight makes the X102BA a very portable machine.  Plus you can get it in Hot Pink!

The ASUS X102BA features cutting-edge multi-touch technology that surpasses the standards set by Microsoft for Windows 8. With a multi-touch digitizer that recognizes a contact point with a mere 5mm diameter, rather than the Microsoft recommendation of 9mm, the XB102BA offers much more sensitive touch input for precise applications, such as drawing and painting. The X102BA also features a large multi-touch touchpad with gesture support and a keyboard with keys perfectly calibrated for comfortable typing.

Geared for work and play

The ASUS X102BA is powered by an AMD A4-1200 1GHz dual-core APU with Radeon™ HD 8180 graphics that balances multi-tasking performance with energy efficiency. ASUS Super Hybrid Engine II technology with ‘Instant on’ provides users with a smartphone-like experience, thanks to a two-second resume from sleep time, over two weeks a standby time and automatic data backup in sleep mode when the battery level drops below 5%.