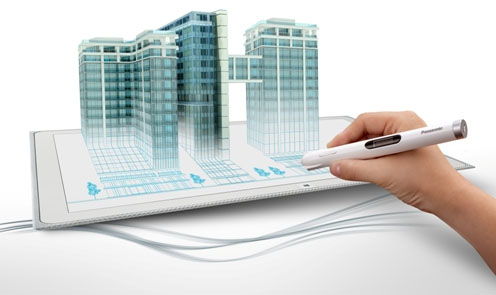 At the IFA 2013 trade show in Berlin, Germany, Panasonic is showing off a prototype 20” tablet with 4K high resolution display called the ToughPad 4K UT-MB5. The tablet is aimed at professional users in sales and marketing as well as artists, architects, and engineers. The UT-MB5 will come in two models: standard and performance. The performance SKU features a faster Intel Core i5 vPro processor and NVIDIA discrete graphics versus the standard version.

The Panasonic ToughPad 4K UT-MB5 is a 20” tablet with a carbon fiber case that measures 12.5mm thick and weighs 2.35 kg (5.18 lbs) for the standard version. The performance version weighs slightly more at 2.7 kg (5.95 lbs). The front of the tablet is dominated by a 20” 4K IPS display with a resolution of 3840 x 2560 (230 PPI), aspect ratio of 15:10, and 176-degree viewing angles. Above the display is a 720p webcam. The UT-MB5 has USB 3.0, SD card, optical smart card, and headphone ports. Panasonic further offers a desktop cradle that allows users to use the tablet as a desktop system by connecting a wireless keyboard and mouse. The desktop dock also expands the IO options to include HDMI output and an Ethernet port. The tablet is ruggedized and rated to be able to withstand drops up to 76cm while turned on.

Internal hardware on the 20” ToughPad includes an unspecified Intel Core i5 vPro processor, discrete NVIDIA Geforce graphics, up to 8GB of RAM, a 128GB (standard) or 256GB (performance) SSD, and Windows 8.1 Pro. There are also wireless radios for 802.11n Wi-Fi and Bluetooth.

Panasonic also provides an optional digitizer called the Electronic Touch Pen. The custom pen connects to the tablet using Bluetooth and uses an infrared camera that can reportedly identify every pixel on the high resolution display. The pen has 2048 levels of pressure sensitivity and can also report angle of tilt.

Panasonic rates the UT-MB5 tablet at around 2 hours of battery life off of a full charge. The company sees the device as a portable touchscreen rather than a mobile tablet, and at 20” and 5+ pounds it is more of a desktop replacement than a mobile device.

The Standard SKU will be available in November for GBP 3,335 (~$5,217) in Germany and Europe. There is no word on US availability yet, however. Panasonic has stated that the higher-end Performance UT-MB5's pricing and availability will be announced at a later date. In the meantime, users can check out the standard version at the IFA show in Berlin in Hall 5.2/101.

It looks like a neat device that should be a hit for professional artists, architects, engineers, and business users alike. It comes with a premium price tag but the display and accurate digitizer is likely worth it!

S1 and AM2 and F, Sockets galore from AMD