Going Inside the NUC

Because the Intel NUC is a bare bones system, you have a little bit of work to do before you can start installing an OS on it.  You'll still need to purchase memory and an mSATA storage device and you can also pick up an mPCIe wireless card if you don't want to have to use Ethernet for connectivity. 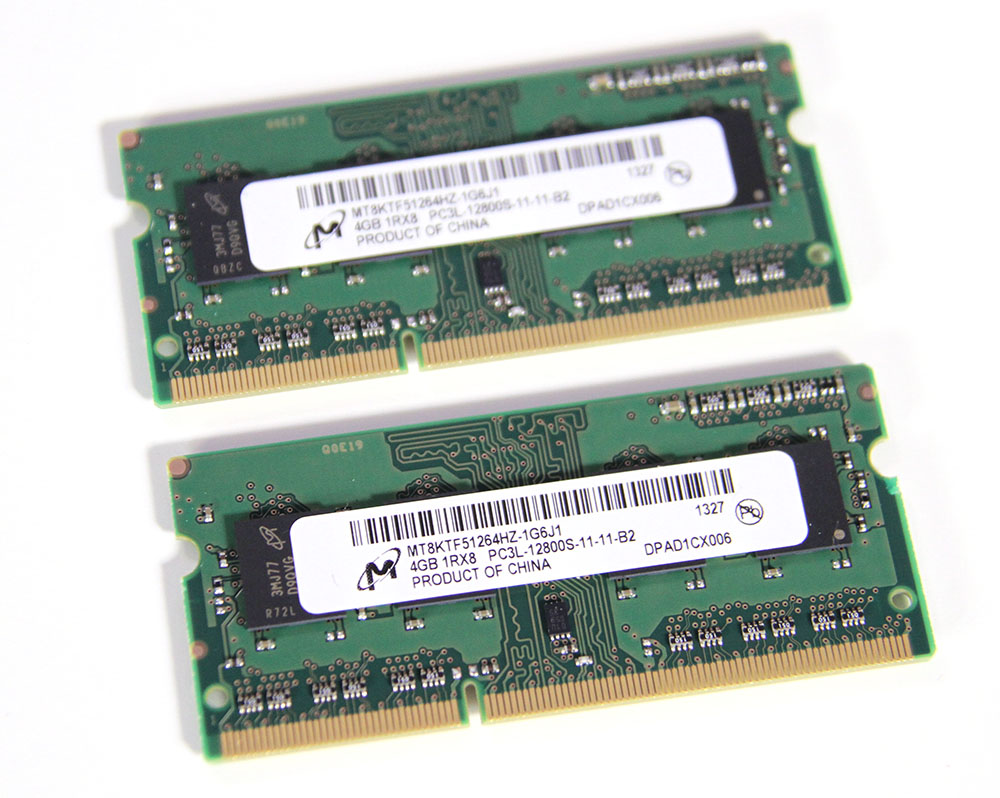 For our testing Intel tossed in the box the necessary components to get up and running.  First up is 8GB of DDR3L memory running at 1600 MHz from Crucial.  These run at 1.35v to keep power consumption low; a nice gesture but really only needed when these components are used in Ultrabooks the U-series Haswell processors actually REQUIRE DDR3L to operate.  Getting two 4GB SODIMMs gives us a TON of memory for a small form factor system and if you want to be able to make this a multi-function device it could come in handy. 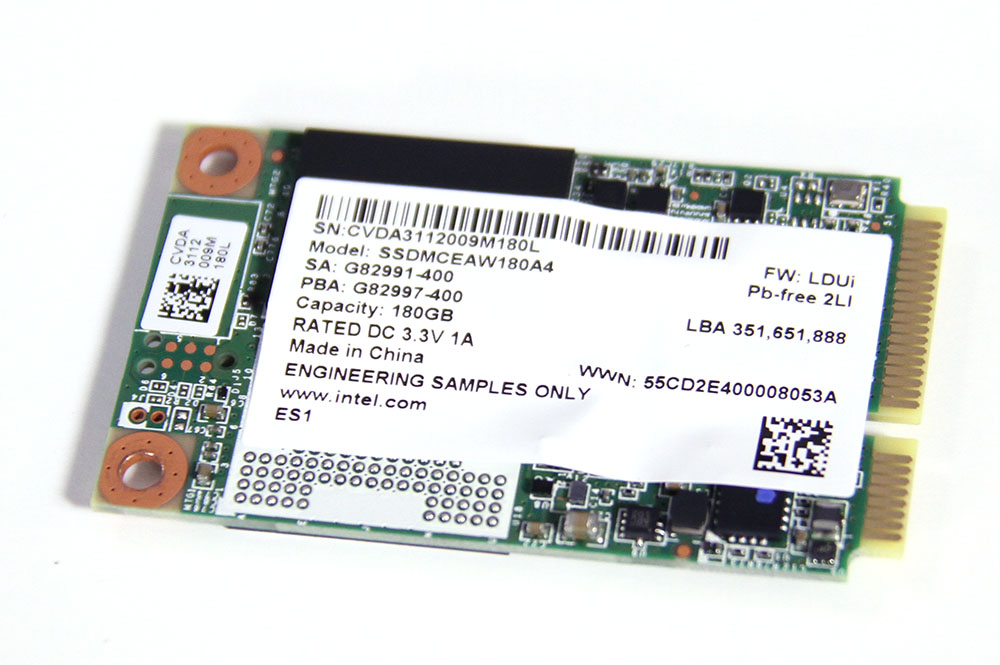 Next up is storage – you need it and the NUC (in its standard case at least) requires an mSATA product.  Intel tossed us the new Intel SSD 530 series drive at a 180 GB capacity that has an MSRP of about $199.  You can get drives from under $100 on Newegg.com and other locations (at about 100-120 GB capacity) so even though I love the performance of this SSD I realize many users will be trying to keep costs down for this build. 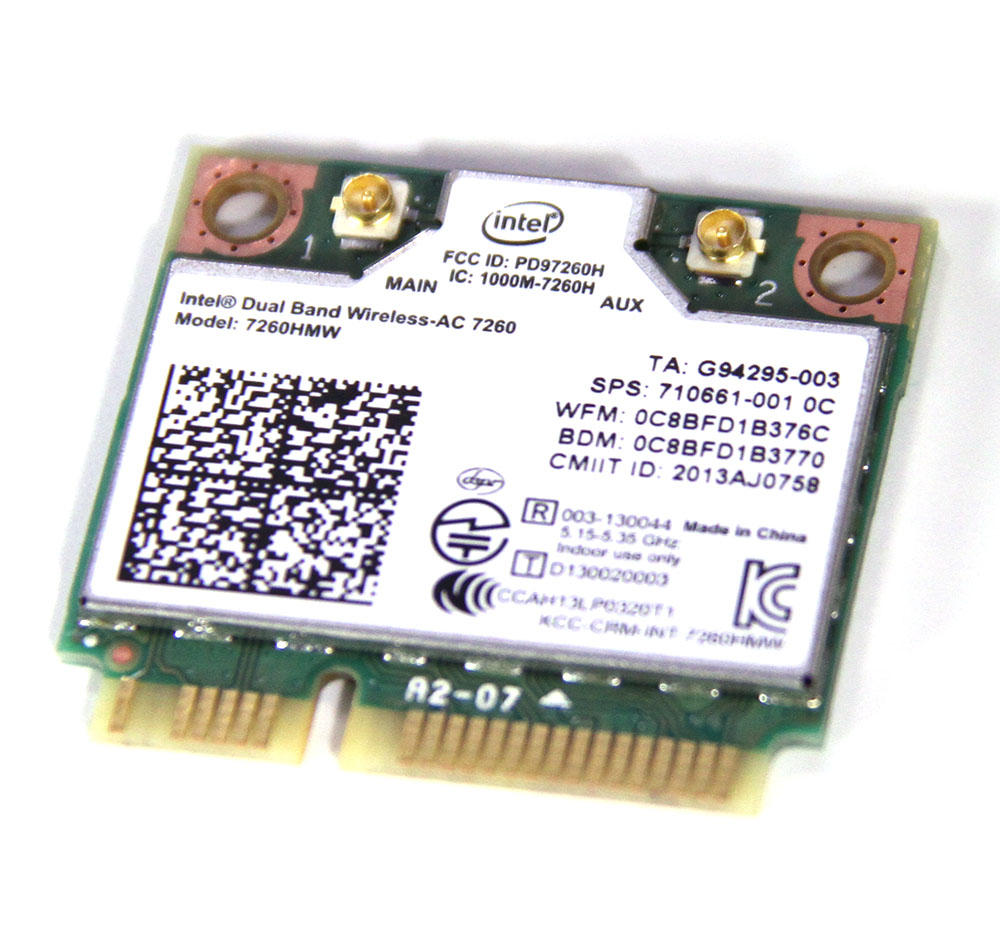 Finally, if you want to use a wireless data connection, you'll need a mPCIe WiFi adapter.  The new Intel 7260 card is an 802.11ac dual-band device that will make sure the NUC is ready for top speed wireless connectivity.  Oh, it also includes Bluetooth.  You can find it at Newegg for under $35. 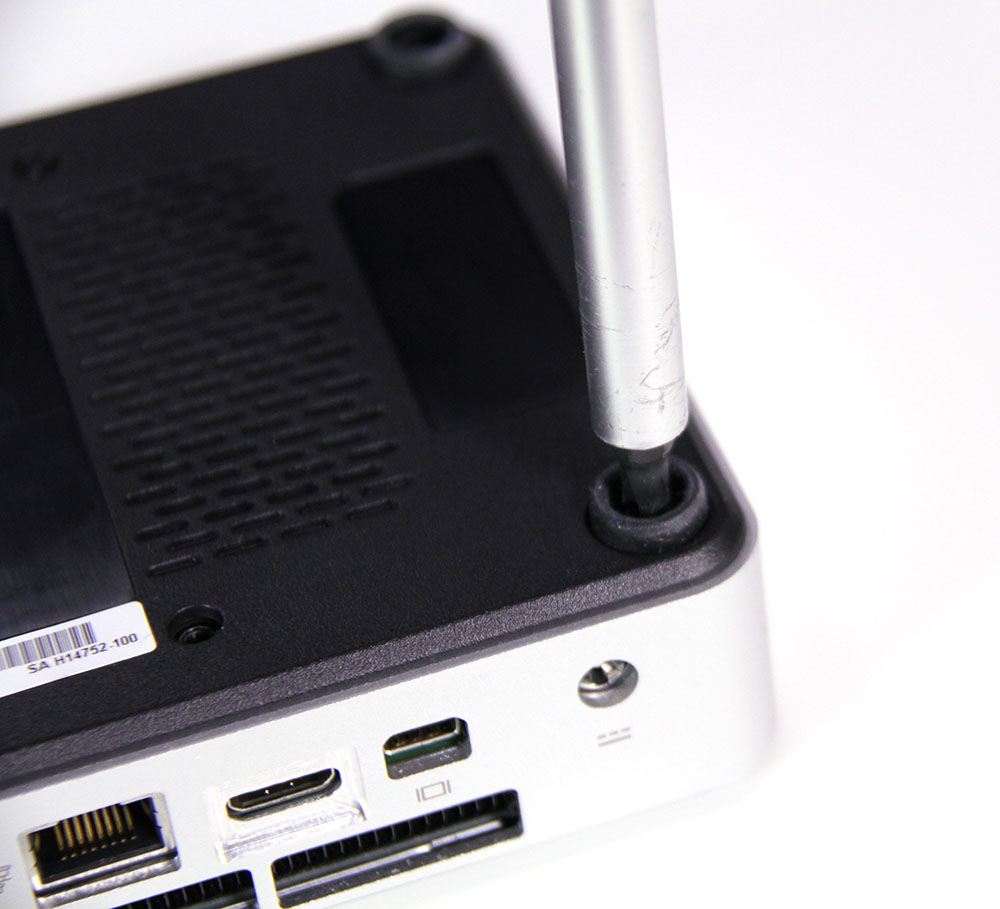 Opening up the NUC is pretty easy with just four screws on the feet of the chassis.  You may need a guitar-pick or something like it to pry it open without scratching the sides. 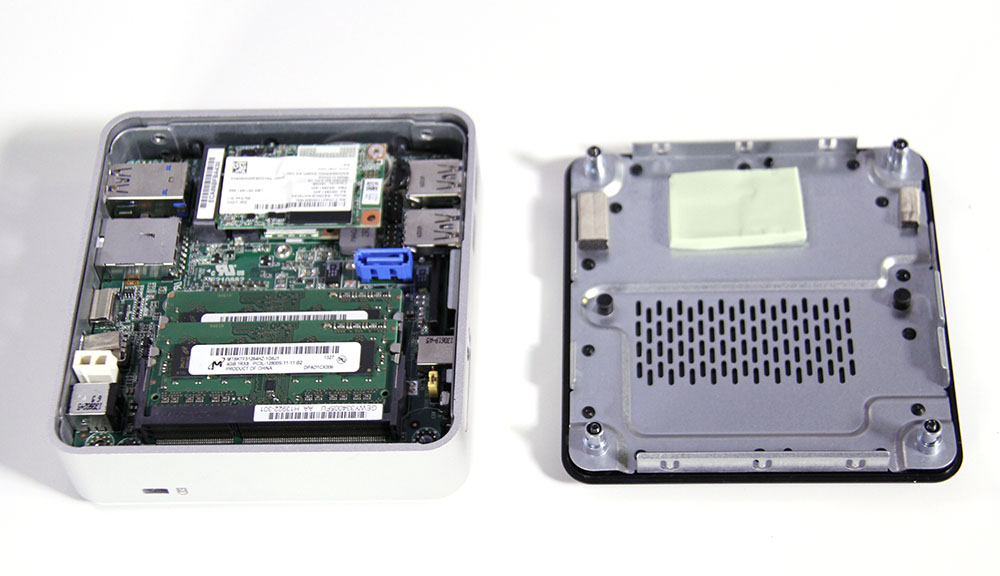 Once you take the bottom of the NUC off you'll be met with the 4×4 motherboard in all its glory.  All the parts you need to install can be easily accessed without needing to remove the motherboard completely. 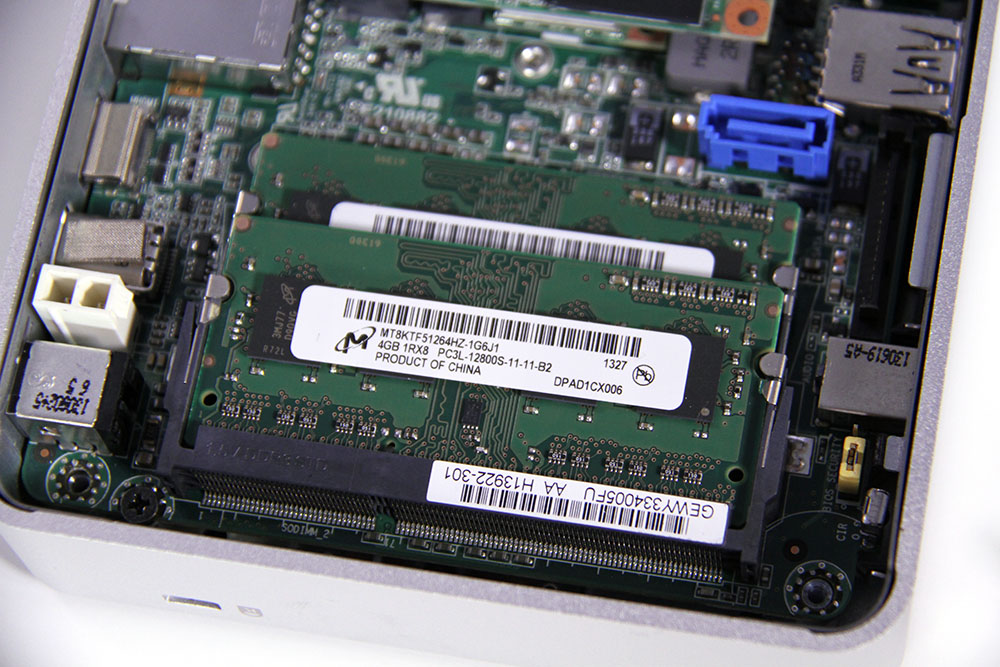 The SODIMM slots are stacked and are easy to install. 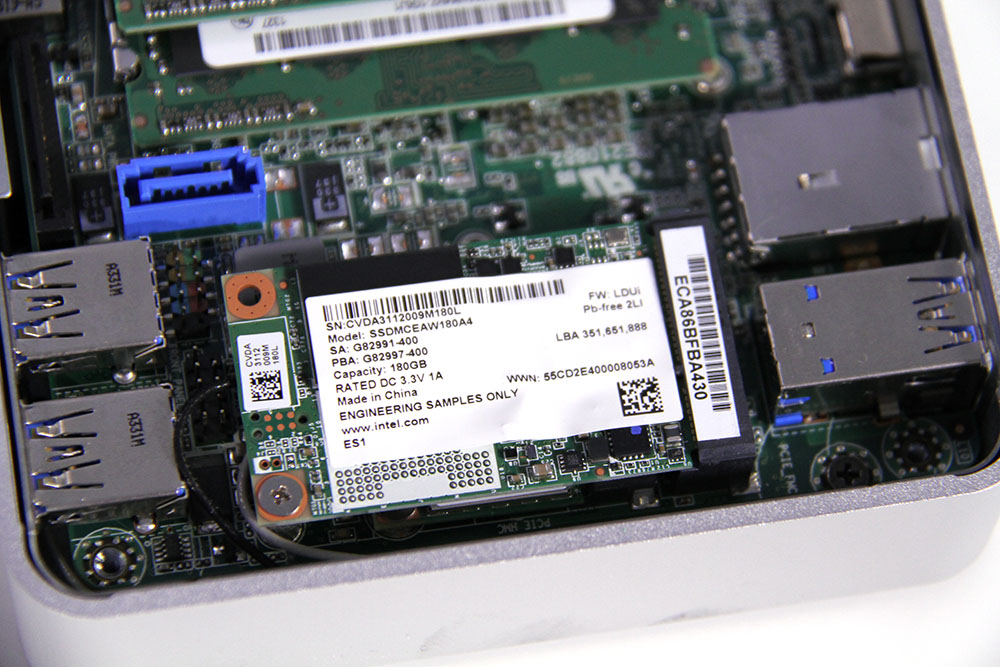 Here you see the Intel 530-series SSD installed in the mSATA slot with a single screw for retention.  Note the bright-friggin-blue SATA connection – obviously Intel has built this Haswell NUC for expansion to other cases where utilization of standard SSD or an optical drive is possible.  As it stands now though, the SATA connection is kind of useless for our purposes.

Intel did include a SATA-style power connector on the motherboard too though you will need a female-to-female power cable to use it. 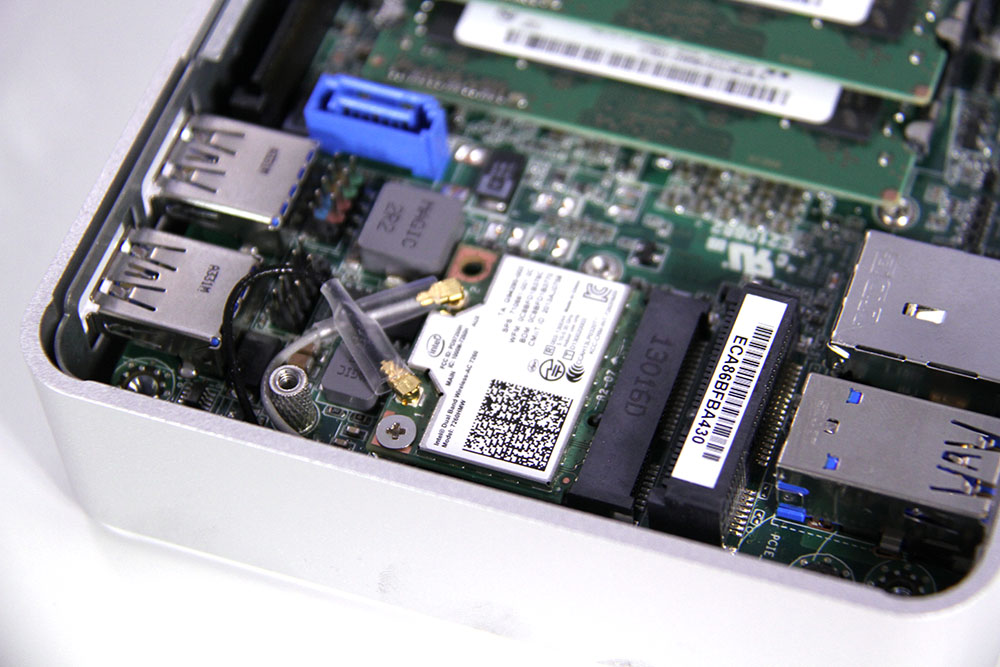 Under the SSD is the wireless mPCIe half-length slot where our Intel 7260 resides.  You might remember from our first NUC review that we had issues with stability when running wireless file copies as it was heating up both the wireless and SSD controllers beyond thermal limits.  We ran some testing with the new Haswell NUC and this model did not exhibit any problems.

Of course we had to remove the motherboard from the case to see what was on the other side.  Once you take it out you can clearly see the promise of such a small, but standardized platform for high performance hardware like Haswell.  Modders are bound to find interesting ways to take advantage of the small form factor and low power and cooling requirements. 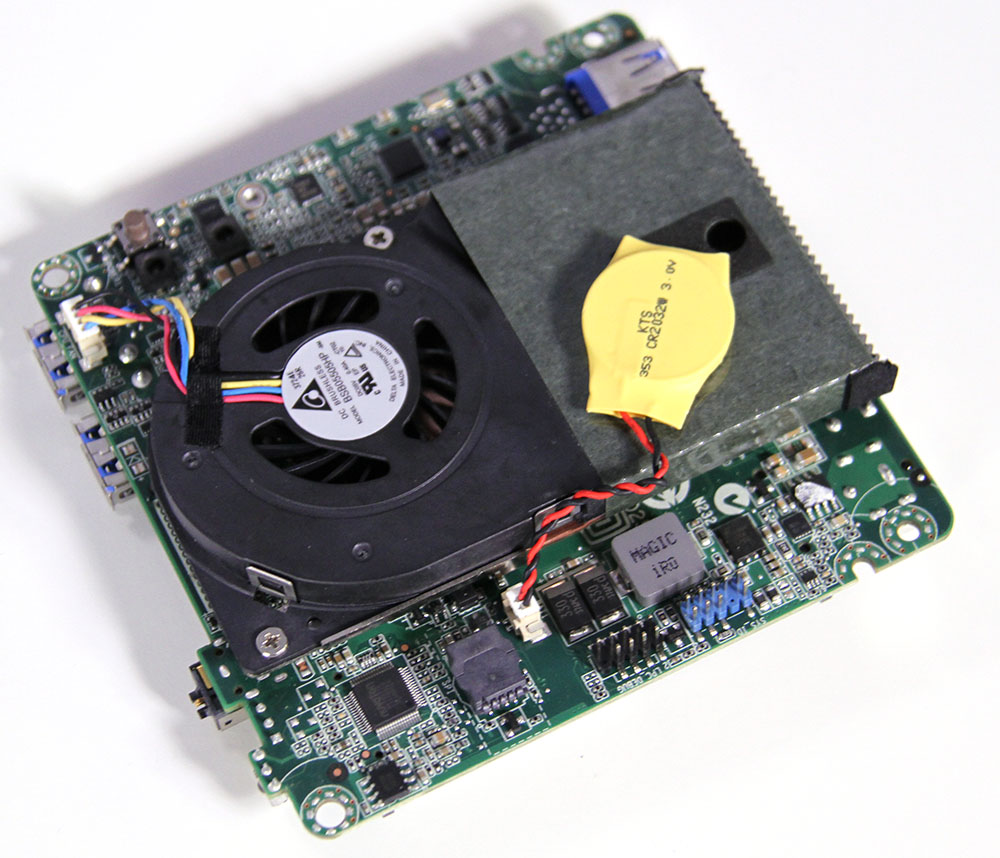 On the bottom of the motherboard you'll find the cooler covering up the Core i5-4250U Haswell processor. 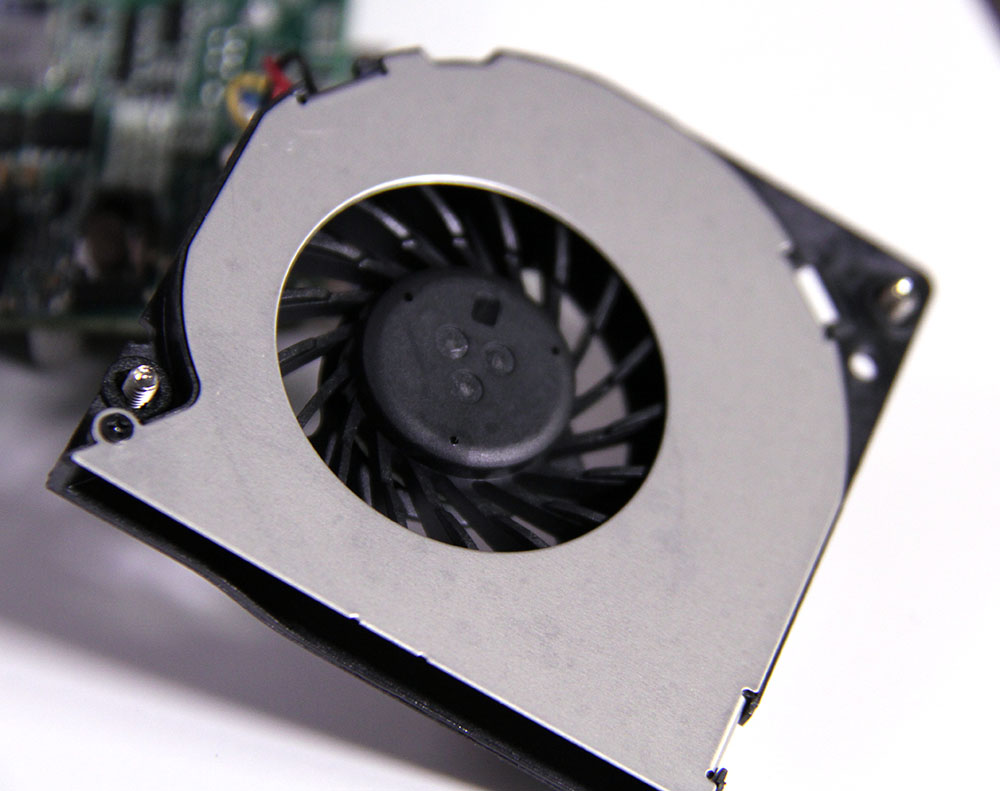 The fan is small and looks just like some of the cooling solutions we've seen in notebooks recently.  The fan's size might have been a problem in terms of noise but even under an hour of looping 3DMark, the fan never really got loud enough to be audible over standard office din.  It's not silent, but it's definitely not loud. 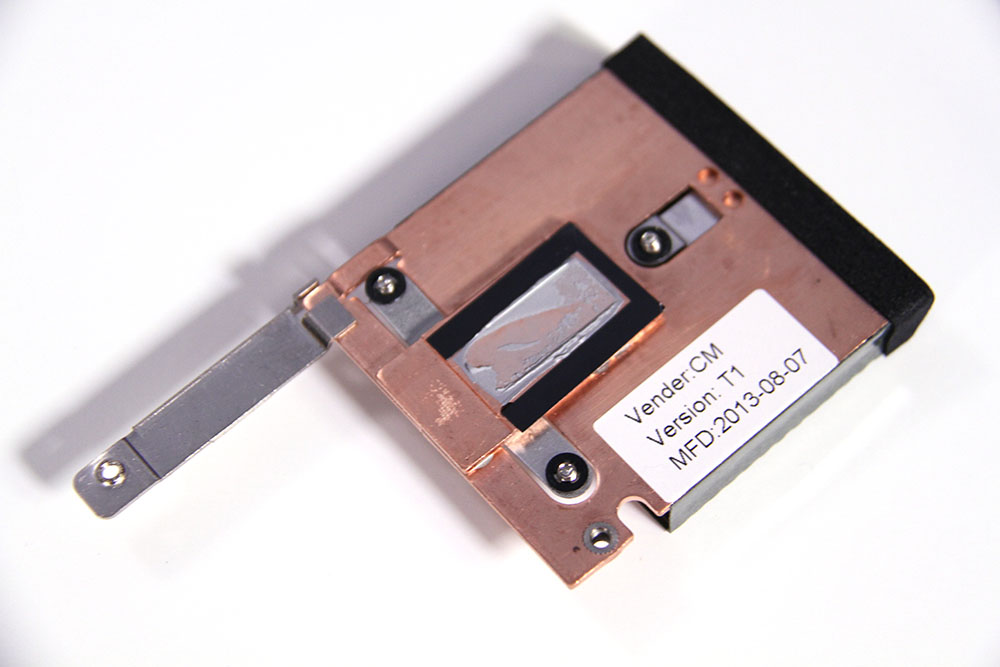 The cooler for the Core i5-4250U has a copper base and aluminum fins. 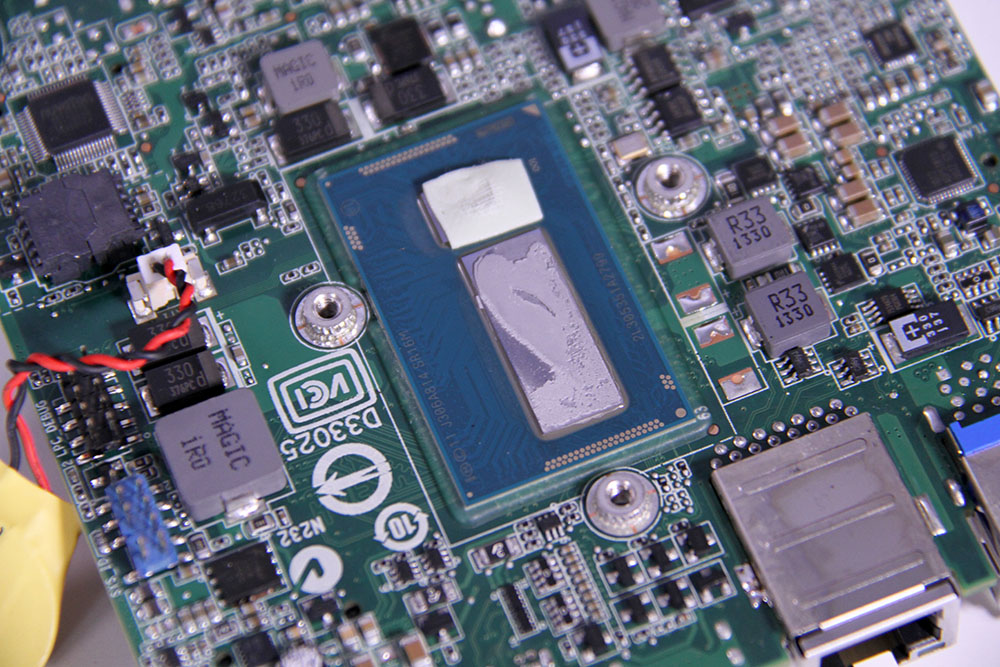 And to conclude our look inside the NUC, a shot of the Haswell processor itself.  Sorry we didn't take the cooling interface material off before the photo, but you get the idea. 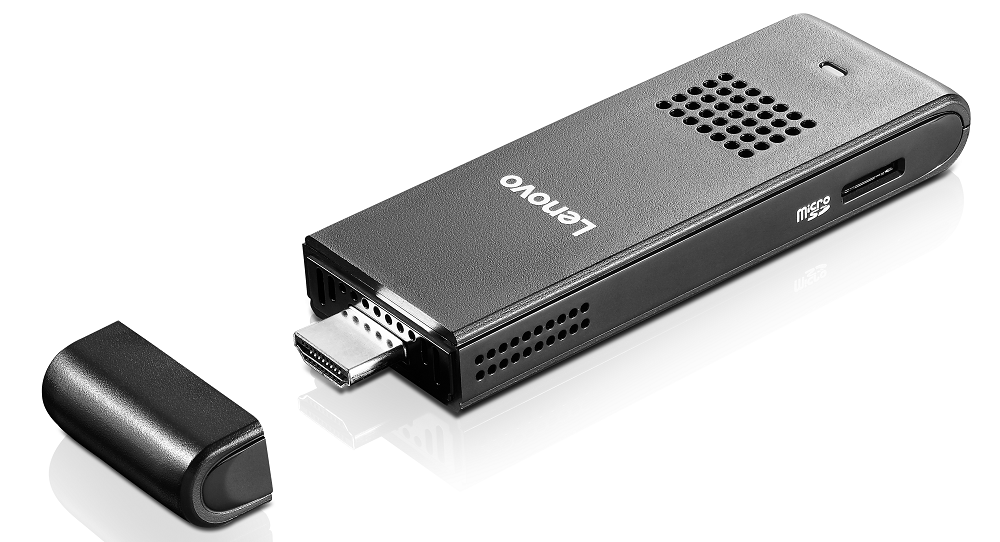