Intel’s Ivy Bridge-E processors are finally ready to be revealed! Can this 22nm update to the LGA 2011 platform change things?

November 14th, 2011 – that is the date that Intel introduced the LGA 2011 socket and the Sandy Bridge-E processor. Intel continued their pattern of modifying their mainstream architecture, Sandy Bridge at the time, into a higher performance (and higher priced) enthusiast class. The new socket differentiated these components into their own category for workstation users and others who demand top performance. Today Intel officially unveils the Ivy Bridge-E platform with essentially the same mindset. 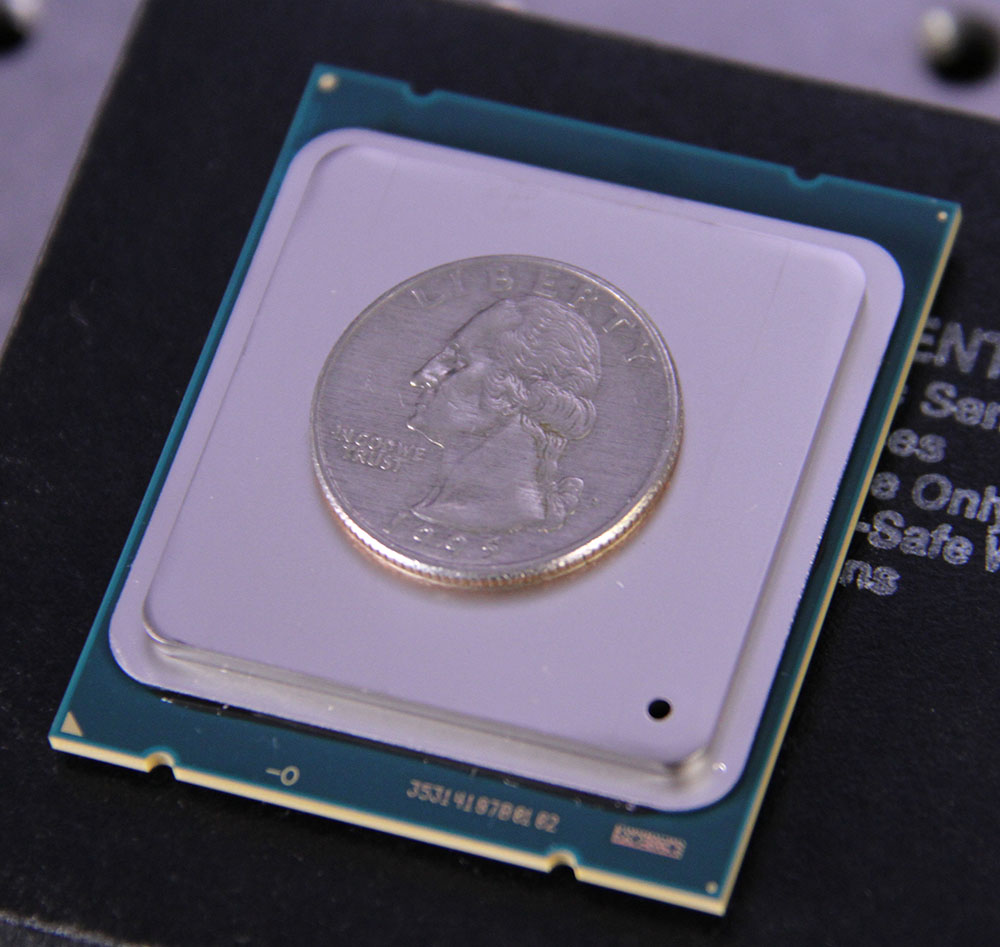 The top end offering under the IVB-E name is the Core i7-4960X, a six-core, HyperThreaded processor with Turbo Boost technology and up to 15MB of L3 cache.  Sound familiar?  It should. There is really very little different about the new 4960X when compared to the Sandy Bridge-E Core i7-3960X released in 2011.  In fact, the new processors use the exact same socket and will work on the same X79 motherboards already on the market.  (Pending, of course, on whether your manufacturer has updated the UEFI/Firmware accordingly.)

Even though the platform and features are nearly identical between Sandy Bridge-E and Ivy Bridge-E there are some readers that might need a refresher or maybe had never really investigated Socket 2011 products before today.  I'll step through the major building blocks of the new Core i7-4960X just in case. 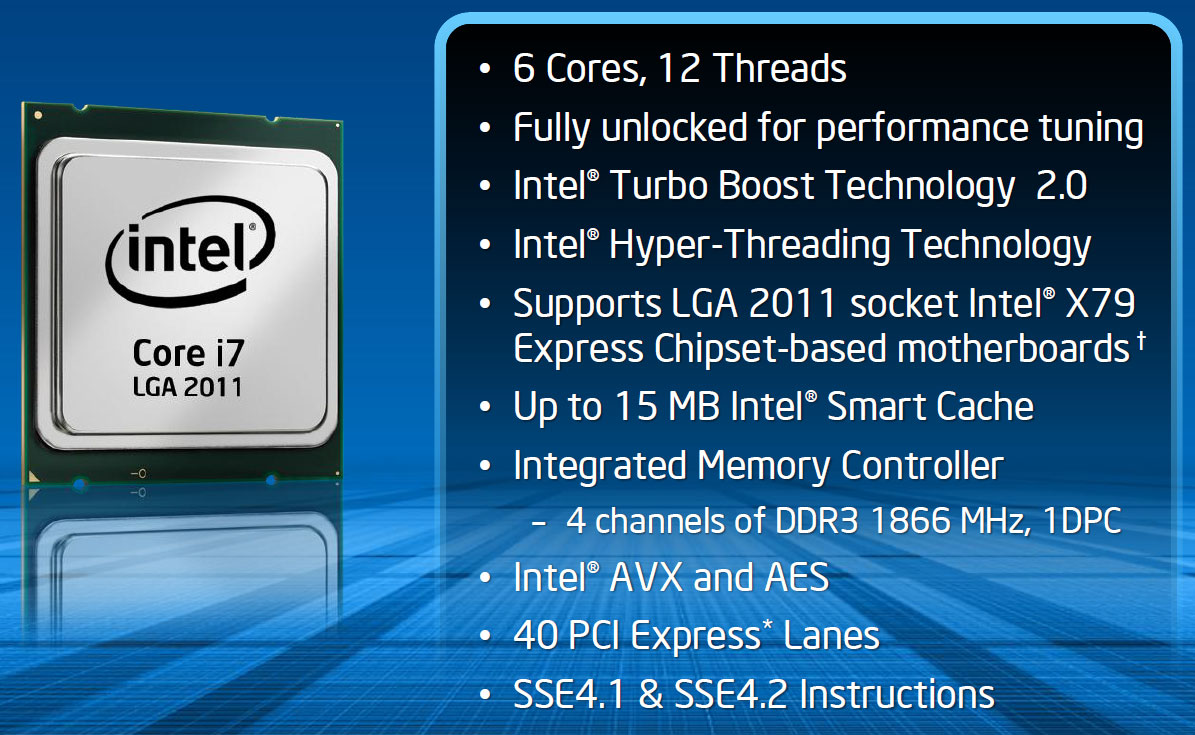 As the name implies, the Ivy Bridge-E processors are based on the Ivy Bridge architecture that we are already familiar with in the mainstream Intel processor segment.  Thus, the architecture does not include the advantages and IPC improvements of Haswell (released just this past June).  Even though the IVB and IVB-E parts share the same basic architecture, they are different in some very important ways.

First, the IVB-E parts will include up to 6 cores and 12 processing threads; only the Core i7-4820K will share the same core count (quad-core) of the mainstream IVB CPUs. Second, IVB-E does not include any kind of integrated graphics; while I would not normally care about that omission for an enthusiast CPU, the lack of QuickSync transcoding acceleration is something that I wish Intel had found a way to integrate.

Third, the memory controller on IVB-E is quad-channel as opposed to the dual-channel controller found on the mainstream platforms.  This means that nearly all X79 boards will ship with at least 4 DIMM slots while most will actually have 8, supporting as much as 64GB of system memory.  It also means you'll need a four DIMM kit to take full advantage of the memory bandwidth available on IVB-E.

Another important change is the move from 16 lanes of PCI Express up to 40 lanes!  This means that the X79 + IVB-E systems can easily support 3- and 4-card graphics configurations without the need for external PCIe bridge chips. 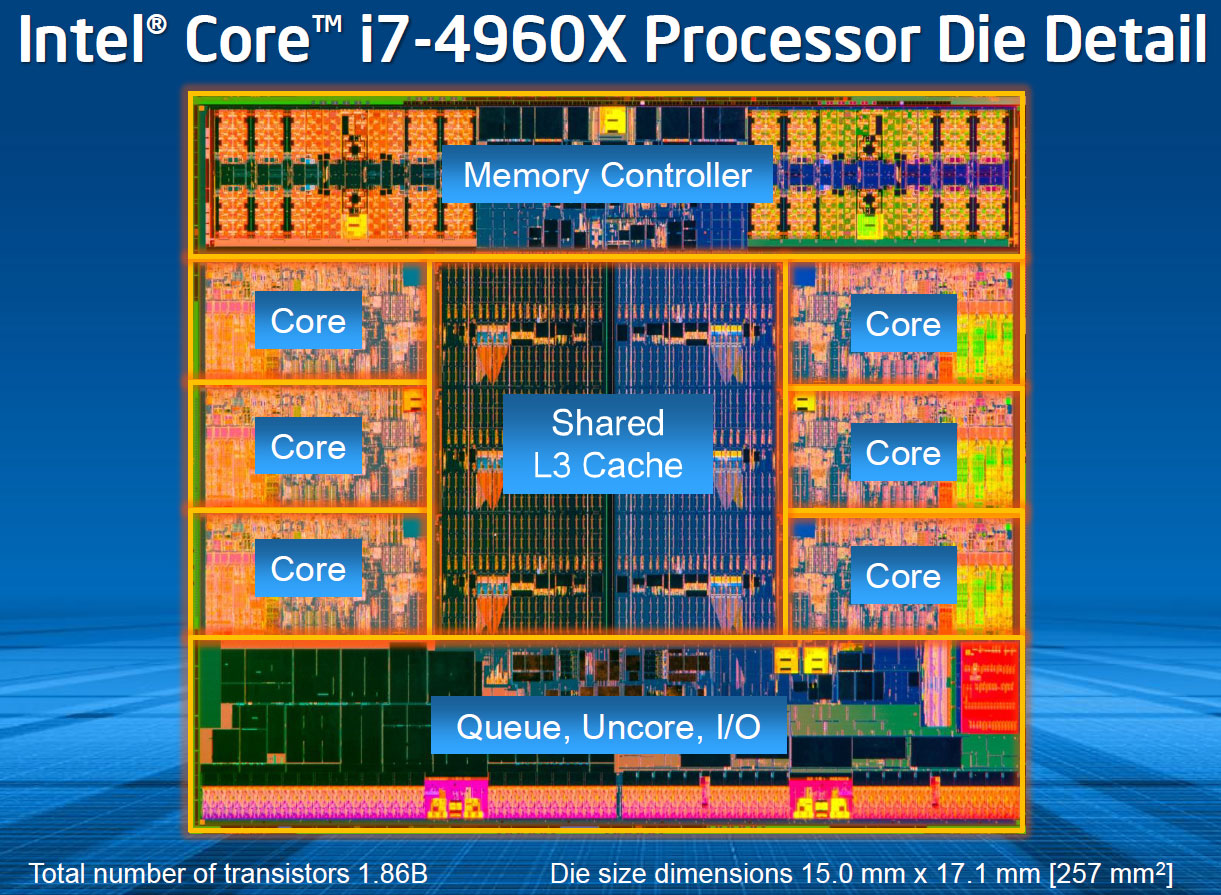 This die shot of the Core i7-4960X shows the six processing cores as well as the large L3 shared cache that is as large as 15MB depending on the SKU you purchase. 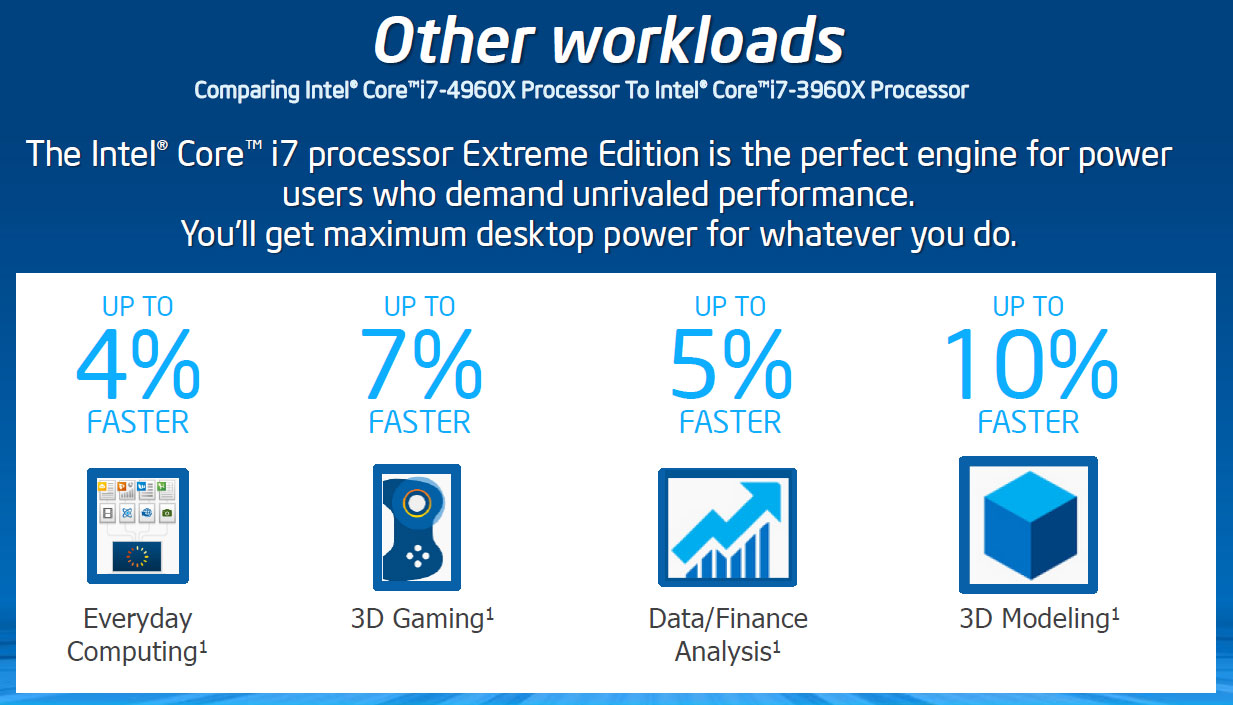 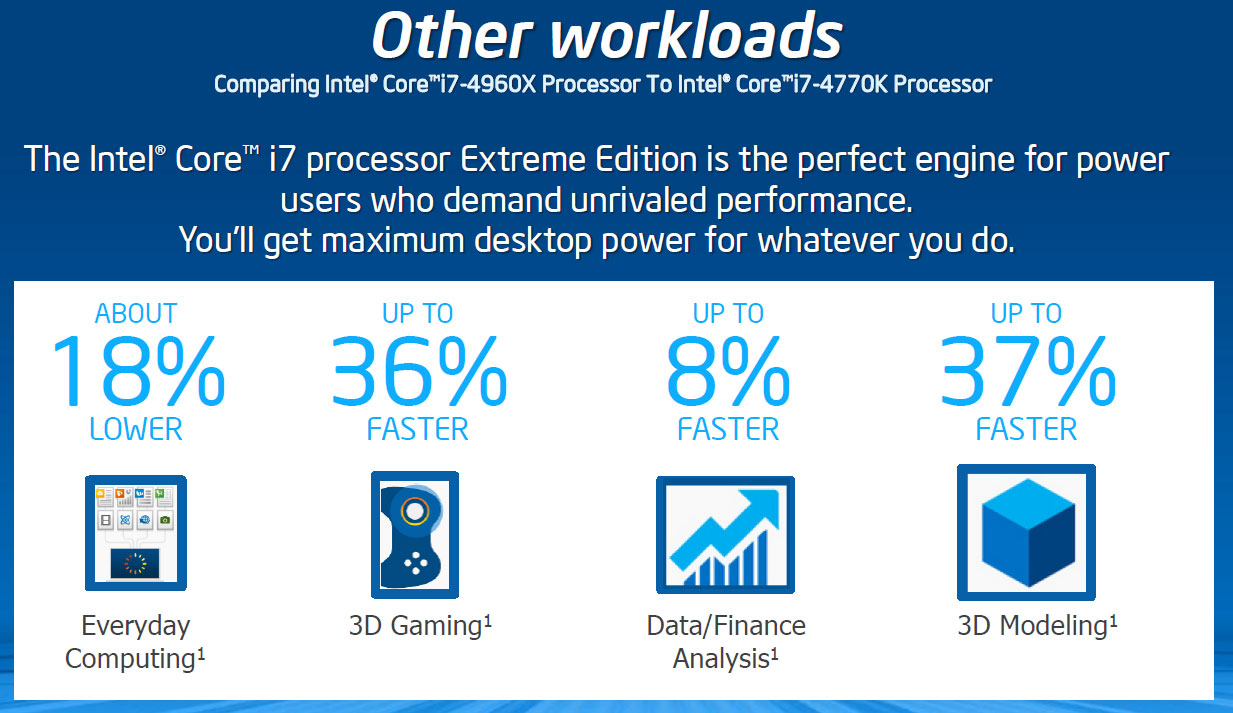 Intel has some pretty lofty goals for the performance advantages of Ivy Bridge-E over Sandy Bridge-E and even over the latest Haswell Core i7-4770K.  Some of these metrics are fair while others are pretty misleading; the 36% faster in 3D gaming result for example is based solely on the physics test of 3DMark Fire Strike. 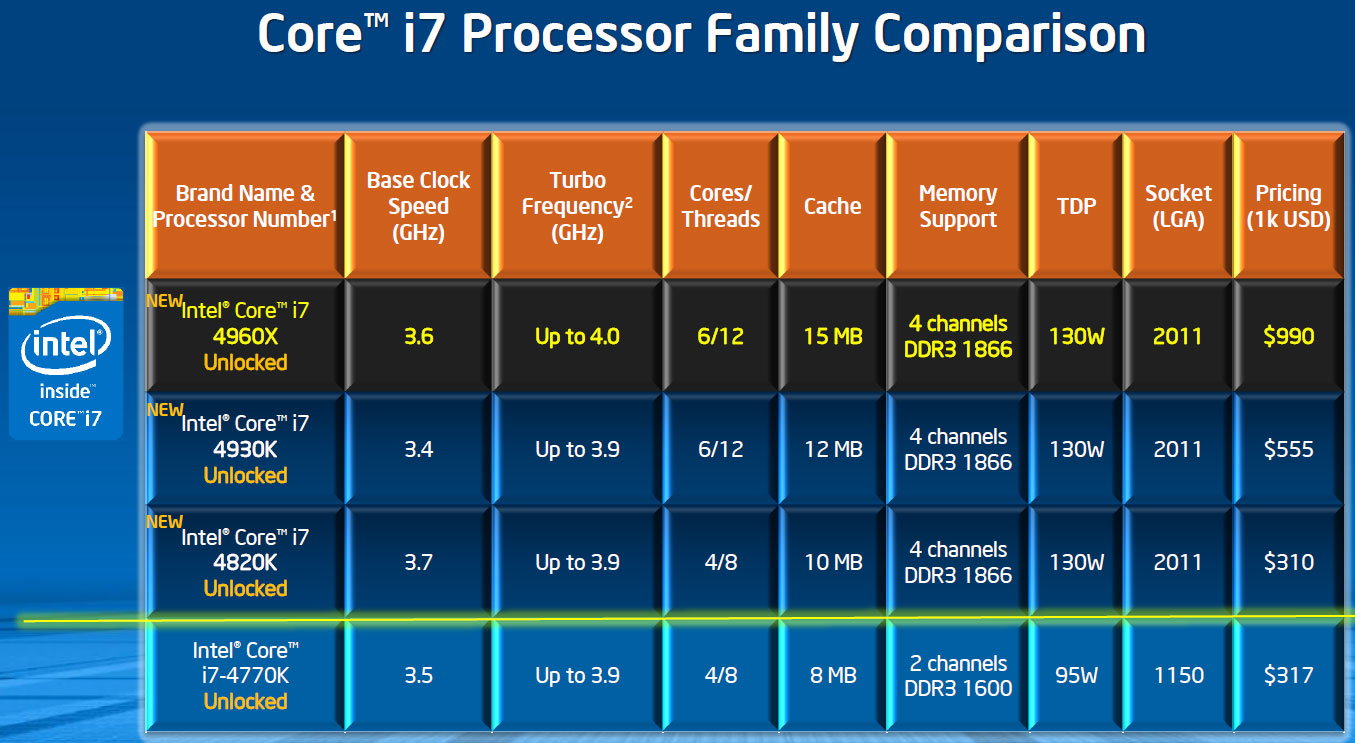 Here is the lineup of IVB-E parts that will be available starting this month.  The flagship Extreme Edition processor is the Core i7-4960X that runs at a base clock of 3.6 GHz and a top turbo speed of 4.0 GHz.  The Core i7-4930K is bound to be much more popular with a base clock of 3.4 GHz and a Turbo Boost frequency of 3.9 GHz, all while being priced $435 lower.  Finally, the quad-core variant is the Core i7-3820K that will be sold at a $310 level but enables the features and support of the X79 platform at the lowest possible price. 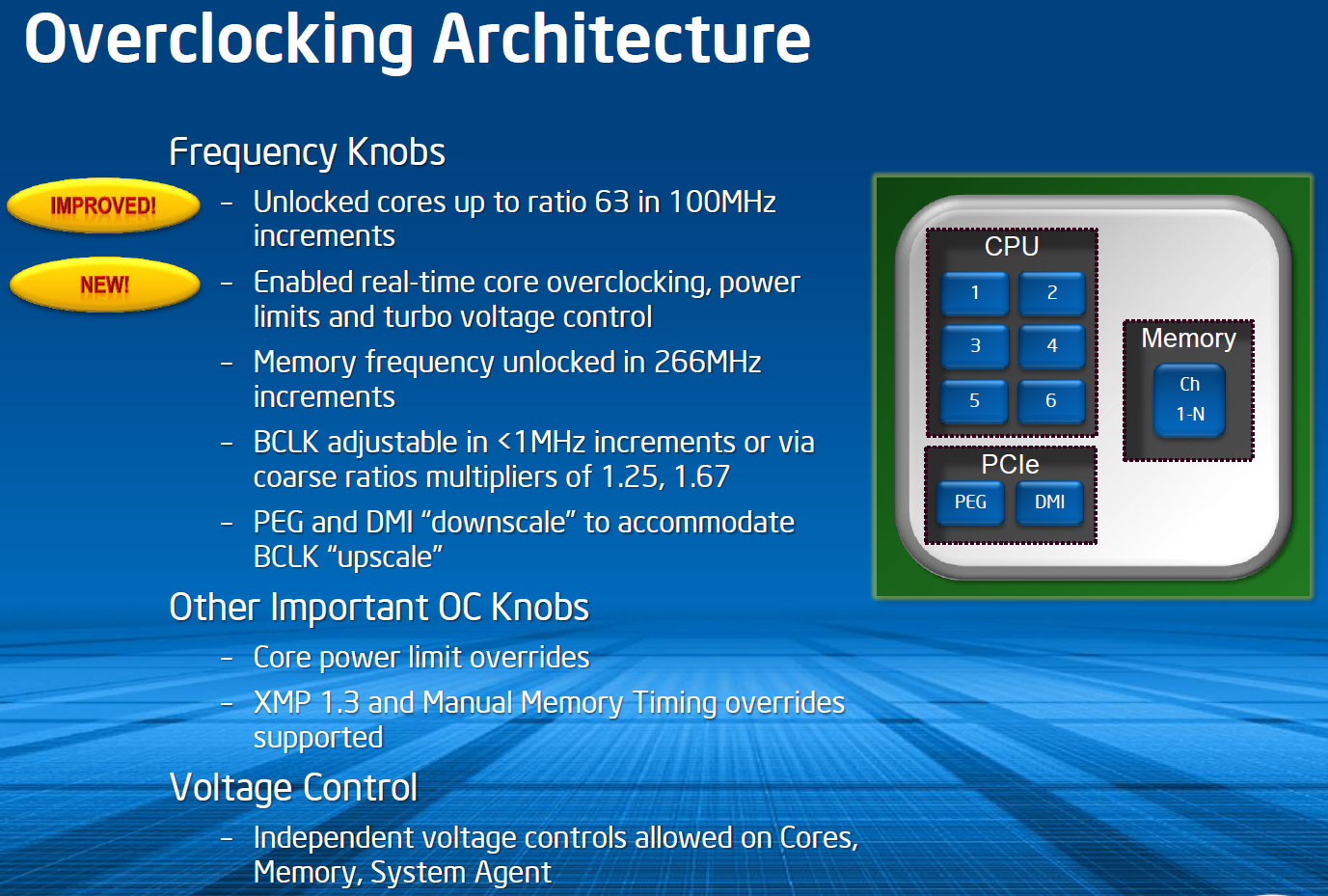 One thing that Intel does do right with the X79 platform and associated processors is enable overclocking pretty much without restriction.  The cores are unlocked on all three CPUs being released today and Intel has even added the ability to adjust core clocking, power limits and turbo voltages in real time via software.