There have been rumors floating around the Internet concerning a new Nokia Lumia-series smartphone running the latest version of Microsoft's Windows Phone 8 GDR3 operating system. Called the Nokia Lumia 1520, the 6-inch smartphone will reportedly be announced at an event in New York on September 26.

The Lumia 1520 features a similar aesthetic to the existing Lumia phones, including beveled edges and a polycarbonate body. The 6-inch smartphone is dominated by a large 1080p display on the front and a PureView camera on the rear capable of taking simultaneous 5MP (supersampled) and 16MP photos.

Twitter user @evleaks suggests that the smartphone is coming on September 26th.

Internally, the Lumia 1520 is powered by a 28nm HPm Qualcomm Snapdragon 800 SoC with four Krait 400 CPU cores clocked at up to 2.3 GHz, an Adreno 330 GPU, and 4G LTE modem. Other specifications include 2GB of RAM, 32GB of internal storage, and a microSD card slot for adding additional storage space. 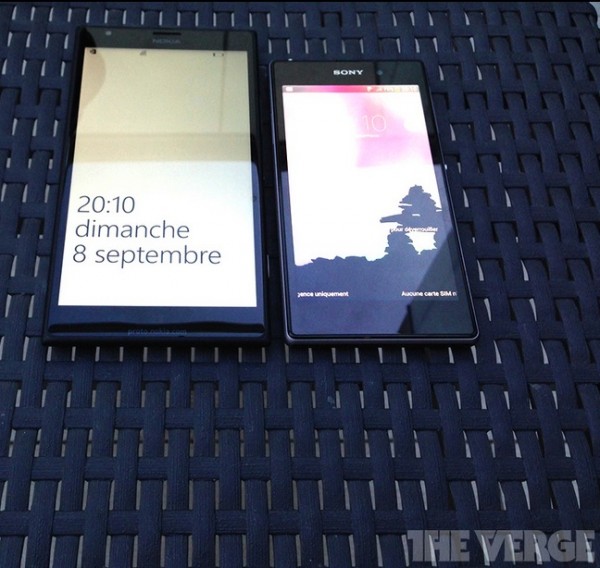 The rumored Lumia 1520 compared to a Sony Xperia handset. Via The Verge.

On the software side of things, Nokia is using Microsoft's Windows Phone 8 GDR3 operating system and adding their own Bittersweet shimmer firmware on top. The new firmware adds improved multitasking, custom ringtones, a driving mode that silences calls and text messages when connected to a car via Bluetooth, and an additional column of live tiles on the Start screen among other features.

In all, the Lumia 1520 looks to be an impressive bit of kit, especially for a Windows Phone smartphone. Considering Windows Phone at least seems to be more efficient than the other mobile operating systems (it is able to do more with less hardware in terms of user interface and OS performance), the new Nokia smartphone – with beefy hardware similar to high end Android phones – should be quite speedy!

The device is rumored to be announced on September 26, 2013 where the specifications and pricing should be officially revealed. Hopefully the phone is as powerful as the rumors suggest!