Maybe the most interesting product, at least released today, is the AMD Radeon R7 260X (replacing the Radeon HD 7790). Once again, the ASIC between these two cards is identical. Specifications and performance should be nearly indistinguishable when compared. I was intrigued to learn that the HD 7790 GPU was the test subject for two new technologies: an updated CrossFire integration and AMD TrueAudio. These hidden features have a chance to be enabled with future drivers.

AMD talked quite a bit about the TrueAudio technology during the Hawaii / GPU14 tech day live stream but to be completely honest I don’t think there is much to discuss quite yet.  The idea and goal is clear and it makes sense to begin moving audio processing to the GPU. This is a great direction.  This fully programmable audio pipeline is integrated into the ASIC but does not share the resources of the GPU directly; it can merely access some memory locations for shared data communication.

Multiple integrated Tensilica HiFi audio DSP cores are integrated as a dedicated audio solution for game sound effects that can guarantee real-time performance and services regardless of the CPU the graphics card is installed with.  The streaming DMA engine is multi-channel and uses a scatter-gather memory architecture.  There is 384KB of shared memory while the bus interface has support to access the frame buffer on the graphics card.  The ability for a sound API and middleware software package to actively know what is going on inside a game engine could result in substantial changes in the way game audio is designed; programmed rather than planned. 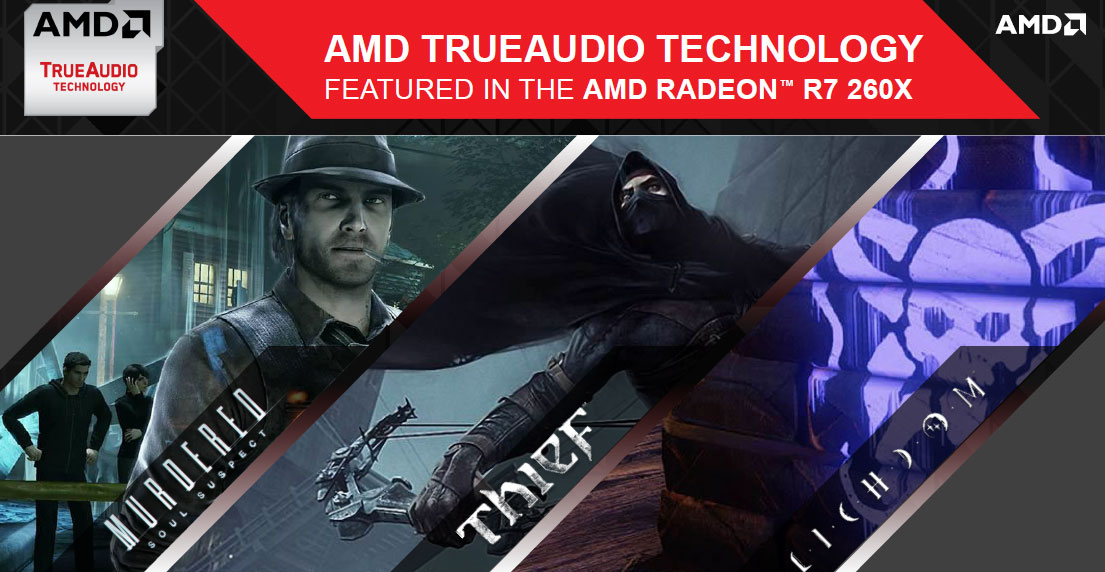 The AMD TrueAudio API can be accessed by developers of audio engines and AMD has already showed commitment from the developers behind Murdered: Soul Suspect, Thief and Lichdom.  We don’t yet have any usable demonstration to test the benefits of TrueAudio and its promise to lower CPU usage while improving flexibility quite yet, but when we do I’ll be sure to discuss it further.

As for the updated CrossFire technology, currently being dubbed XDMA (External DMA I think), the R7 260X supports it but we are going to wait for the release of the R9 290X (that also integrates it) to see how it changes Eyefinity and 4K CrossFire configurations.  More soon!

Back to the specifications on the 260X, and again we find only modest changes from the HD 7790 it is replacing.  The clock speed of the GPU is higher at 1.1 GHz (versus 1.0 GHz on the HD 7790), the memory clock is 500 MHz faster at 6.5 GHz effective and the theoretical performance peak jumps from 1.79 TFLOPS up to 1.97 TFLOPS.  Maybe most surprising is that the typical board power has been increased from 85 watts up to 115 watts, a 35% increase over the card it portends to replace.  The 128-bit memory bus is going to be able to access a 2GB frame buffer by default (as opposed to 1GB previously). 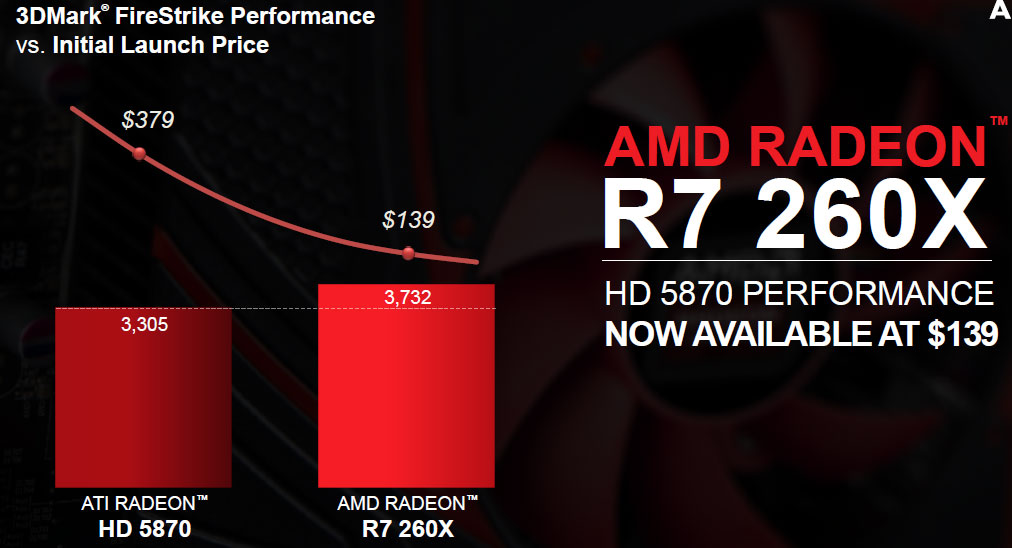 Once again, the rest of the GPU configuration remains the same.  This is a 28nm, 2.08 billion transistor GPU with 896 shaders, 56 texture units and 16 ROPs that mirrors the Radeon HD 7790.

What about pricing?  The Radeon R7 260X will MSRP for $139 which pretty much matches the pricing of the Radeon HD 7790 over the last couple of months.  The big difference though is the doubling of the frame buffer from 1GB to 2GB, giving the new R7 260X the advantage. 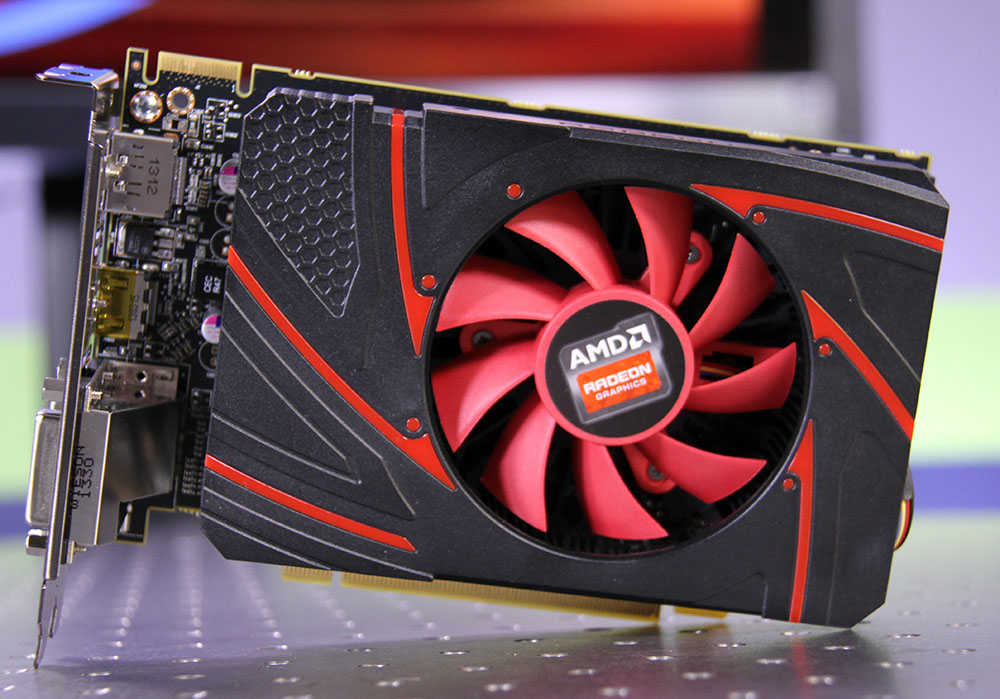 The R7 260X is a pint sized little card but in its reference form still requires a dual-slot installation. 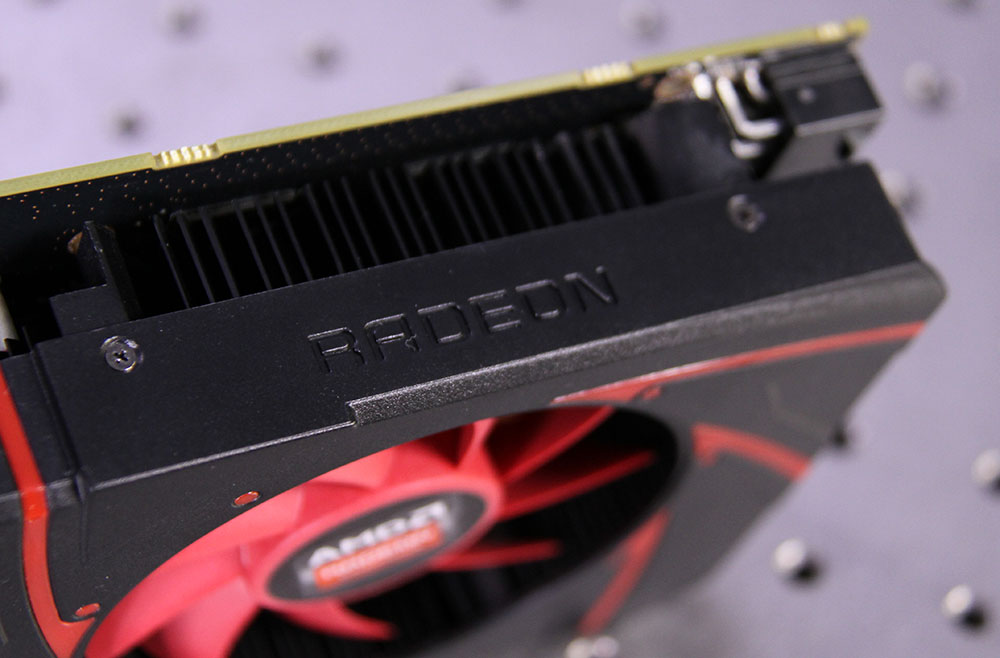 The 260X is powered by a single 6-pin connection and has a short enough PCB length to fit into many smaller HTPC-style chassis.

Consistency – I like it.  The R7 260X reference card continues with the DL-DVIs combined with HDMI and DP.

The AMD Radeon R7 250 is a 384 shader GPU running at 1.05 GHz that runs without need for external power.  The reference card shown here requires a dual slot configuration but I’d assume some partners will make single slot versions.

The R240 is built with a half-height PCB and includes 320 shaders running at up to 780 MHz.  With a 30 watt TDP it could be a great option for fanless designs.