The other big differentiation point (after overclocking) for retail cards of the same GPU is how different the fan and power profiles can be.  Let's take a look at both idle and load power consumption here first. 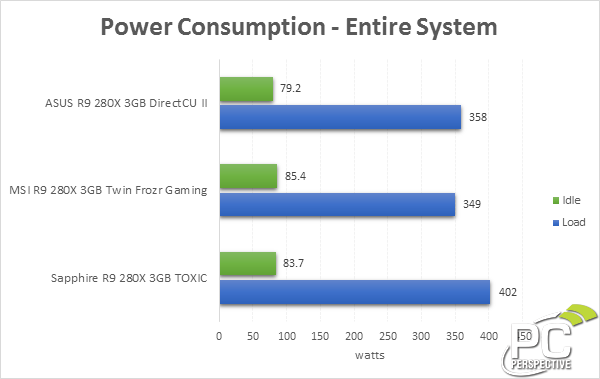 At idle, the ASUS DirectCU II has the most efficient design as we were seeing power consumption under that of both the MSI and Sapphire cards. Under a full gaming load though…wow, the Sapphire TOXIC is pulling 50 watts more than the next highest card!  At 402 watts total system consumption, compared to 358 watts for the ASUS setup and 349 for MSI, I think the large cooler is pretty much a requirement for Sapphire here.

All three retail cards have custom coolers so which one is actually keeping the Tahiti GPU at the lowest temperature, at out-of-the-box speeds? 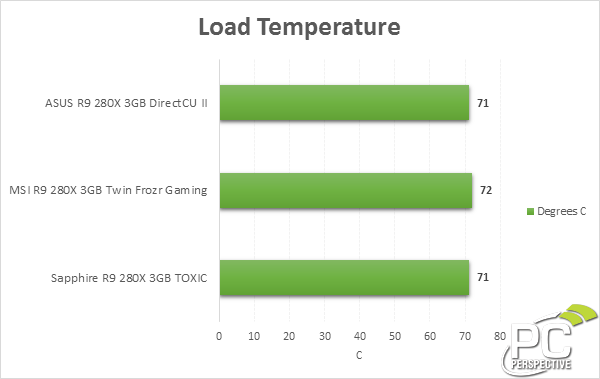 Well that is good to see at least – all three cards are keeping the Tahiti GPU at 71-72C under a gaming load which means we aren't worried about frying any of these guys with any overclocking, etc.  Also, even with the higher power consumption, the Sapphire card is able to keep the GPU temperature in line.

Anyone can build a cooler for a GPU that is effective but the real art of the design comes in doing so while remaining quiet. 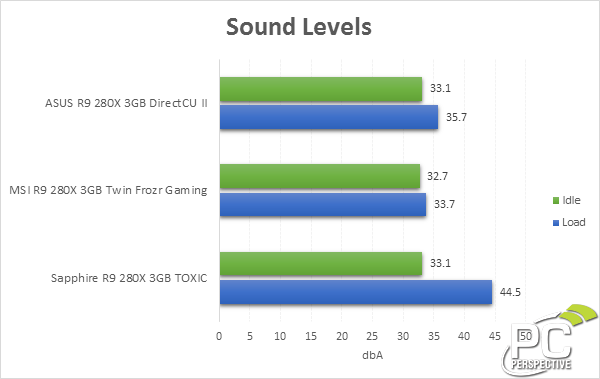 At idle all three custom designs do a pretty good job with noise though the MSI R9 280X Twin Frozr Gaming card has a slightly lower result.  At full load though, which is likely more important to our readers, the MSI card impressed even more by only jumping from 32.7 dbA to 33.7 dbA.  The ASUS card was impressive as well with a load dbA rating of 35.7.  (Note all testing was with ambient sound at 30.1 – 30.3 dbA.)

The Sapphire TOXIC card though…was loud.  At 44.5 dbA the three fans on the cooler definitely were kicking up some dust to keep that GPU at the same 71-72C temperature as the cards from ASUS and MSI.  It was bound to happen. The card uses 50 watts more power and yet runs at the same temperature. This is either magic or it is noise. It is noise.