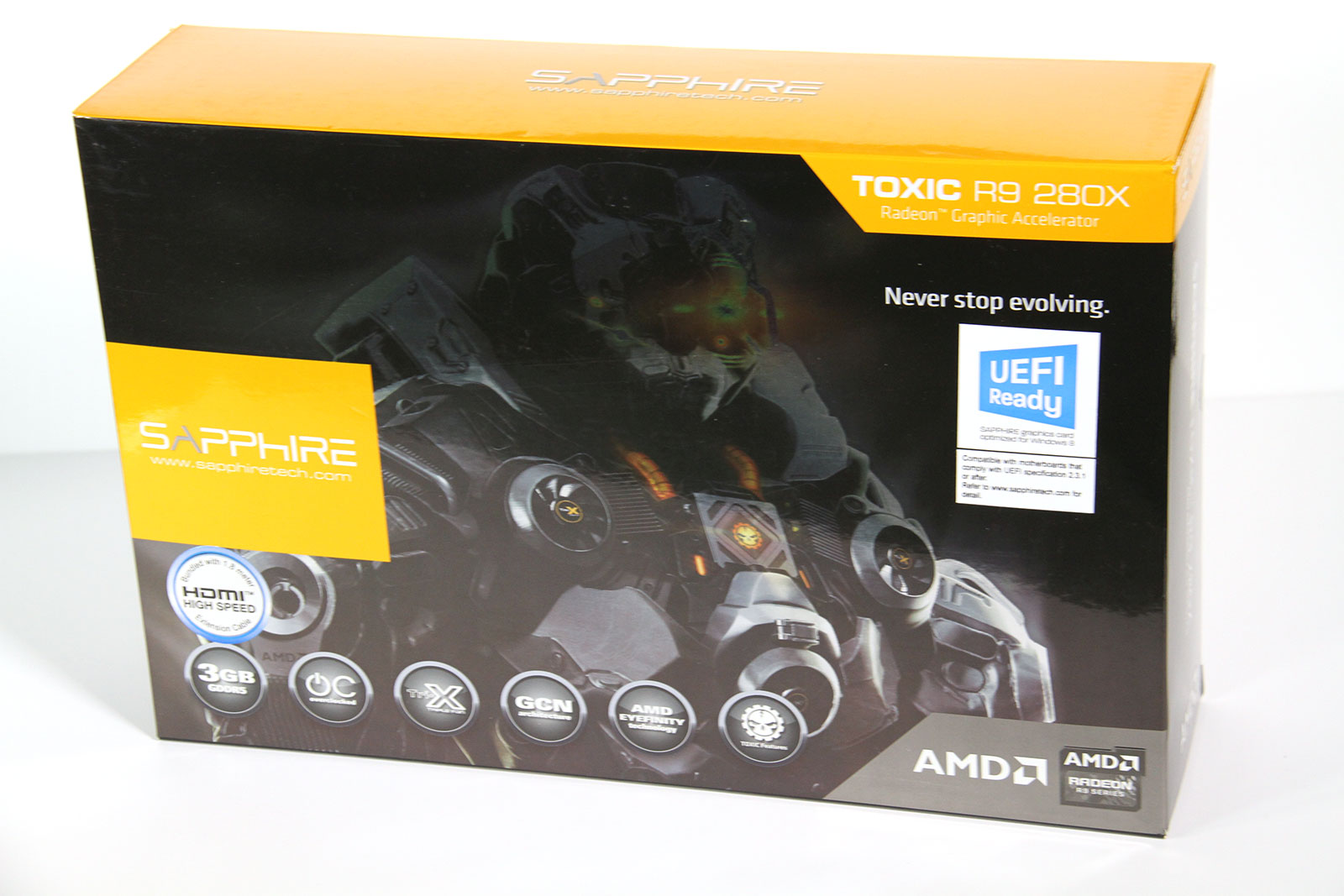 Finally we get to our Sapphire TOXIC version of the Radeon R9 280X.  This card has the most "meat" to it at first glance with the highest overclock out of the box as well as the biggest and baddest looking cooler of the bunch. 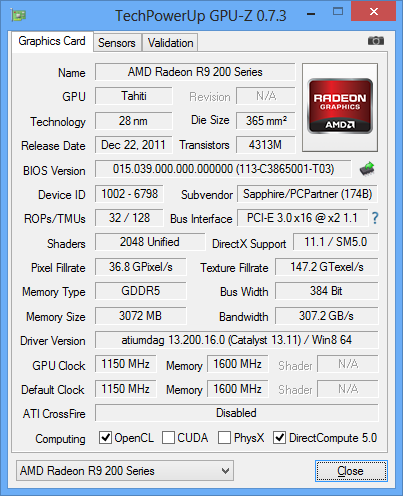 The TOXIC card runs at 1150 MHz GPU clock speed and a memory speed of 1600 MHz, both of which are improved over the reference settings.  At 1150 MHz, 15% over the default settings, the Sapphire card is obviously going to have a performance advantage over the ASUS and MSI cards when we just "plug in and play." 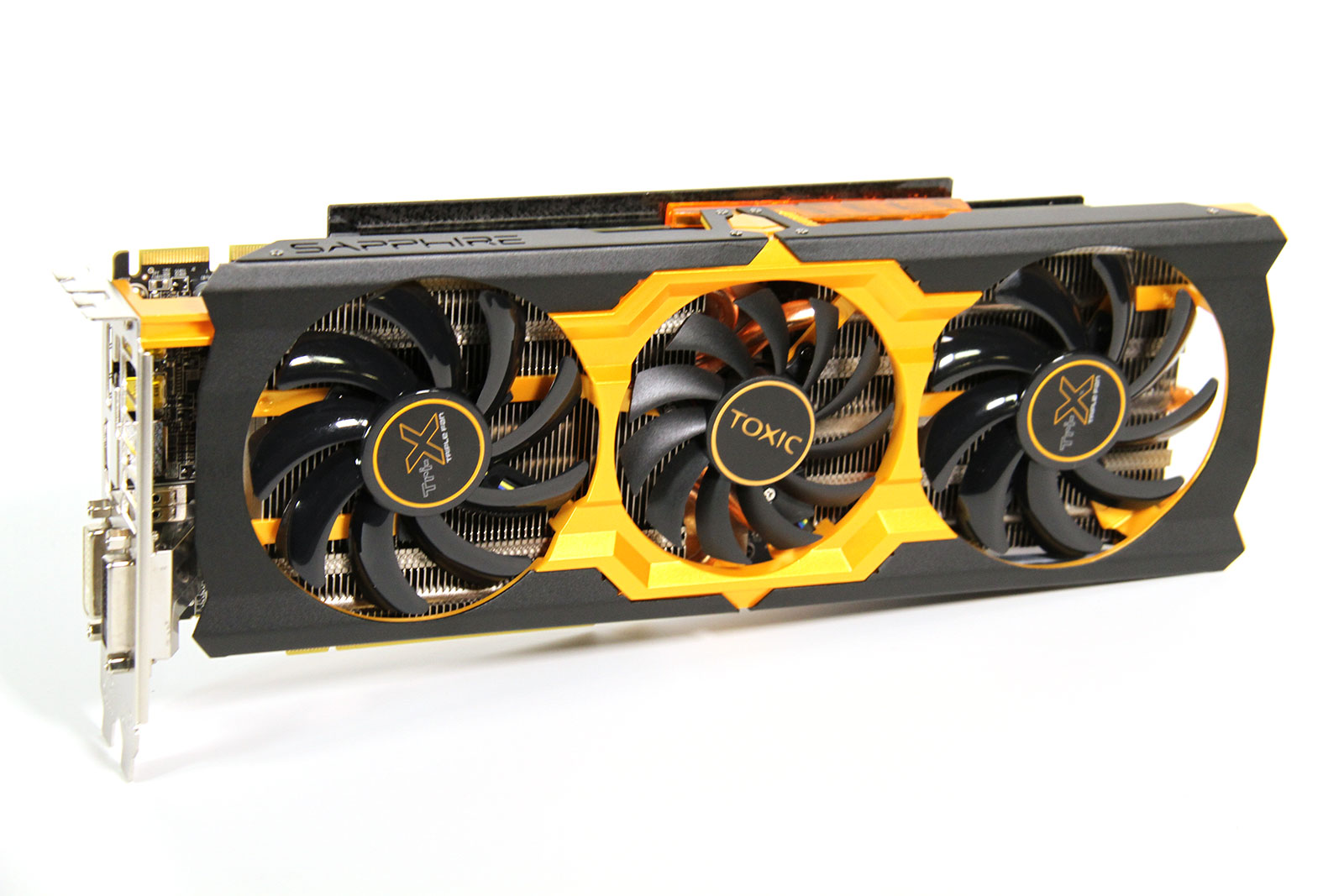 The Sapphire card moves the bar up some by making its cooler taller and longer while also including a set of three fans (rather than the usual two).  The two fans on the outside are a smidge bigger than the one in the center although all three are smaller than those used on the ASUS and MSI offerings.

An orange and black color scheme also adds some flash to it which set it apart. 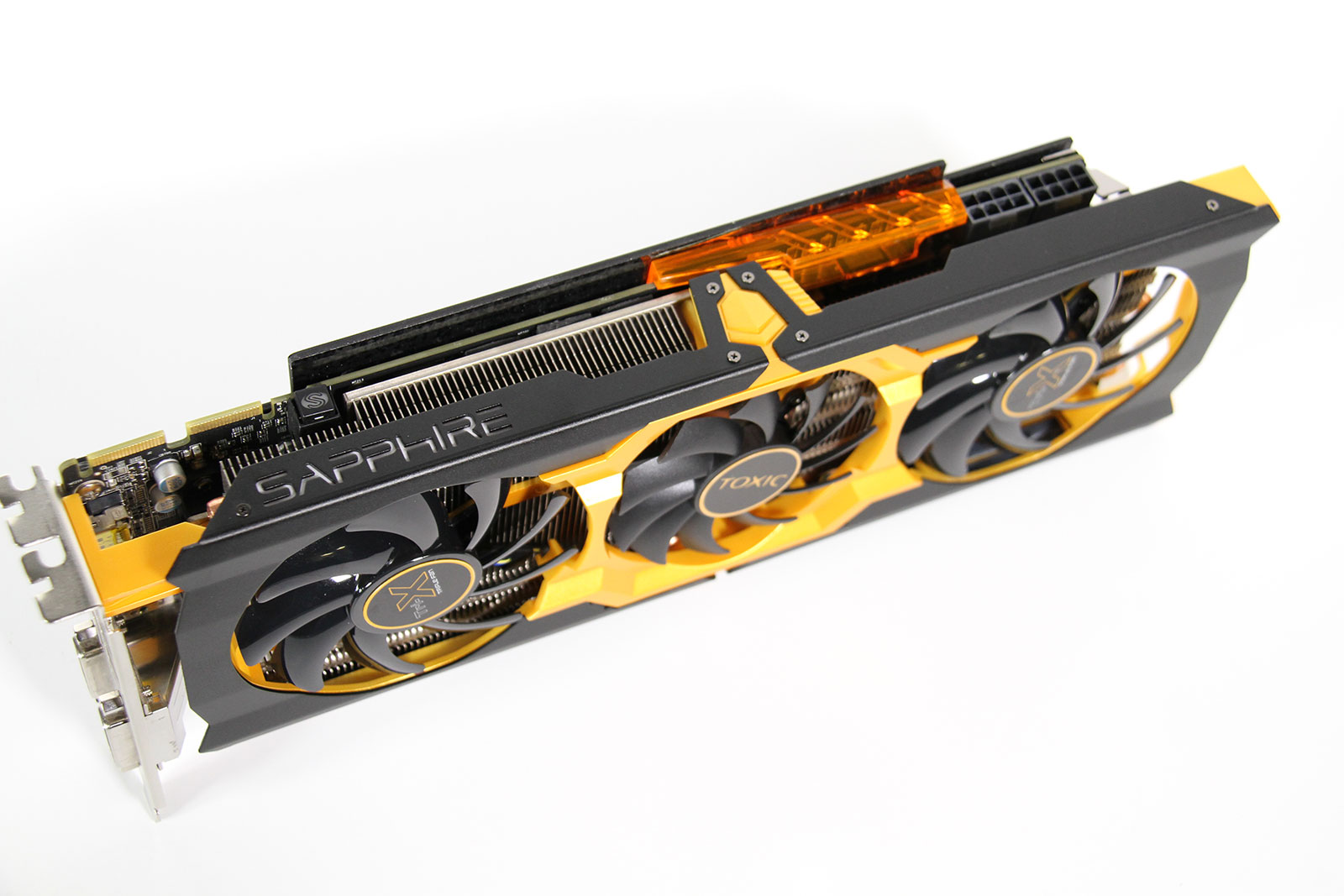 Sapphire classes things up some more with a lit logo along the top and an orange plastic cover hiding the voltage monitoring points for those extreme overclocking types.  The button above the Sapphire logo (which lights up yellow by the way) is used to switch between standard and UEFI modes.

The cooler under the three fans includes a pair of 6mm, a pair of 8mm and a single 10mm heat pipe and a fairly massive amount of cooling fins for dissipation. 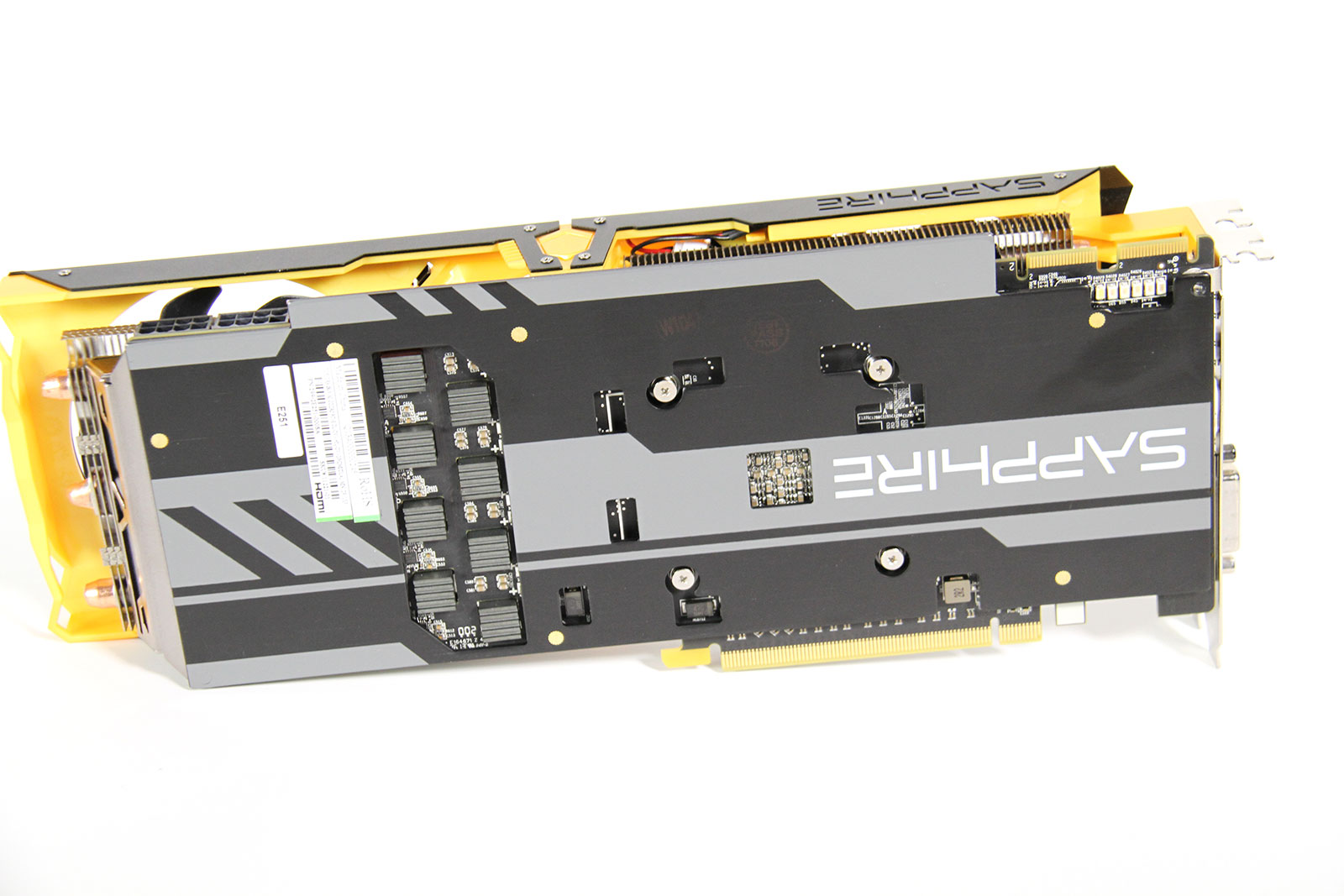 Also, the back plate looks pretty damn cool when installed in a system with a window.

Attempting to further up the ante, Sapphire bumped up the power delivery to the card with an 8+8 connection rather than the default 8+6.  You may also notice that the cooling shroud extends past the PCB here by another inch and half making it the longest card in our roundup. 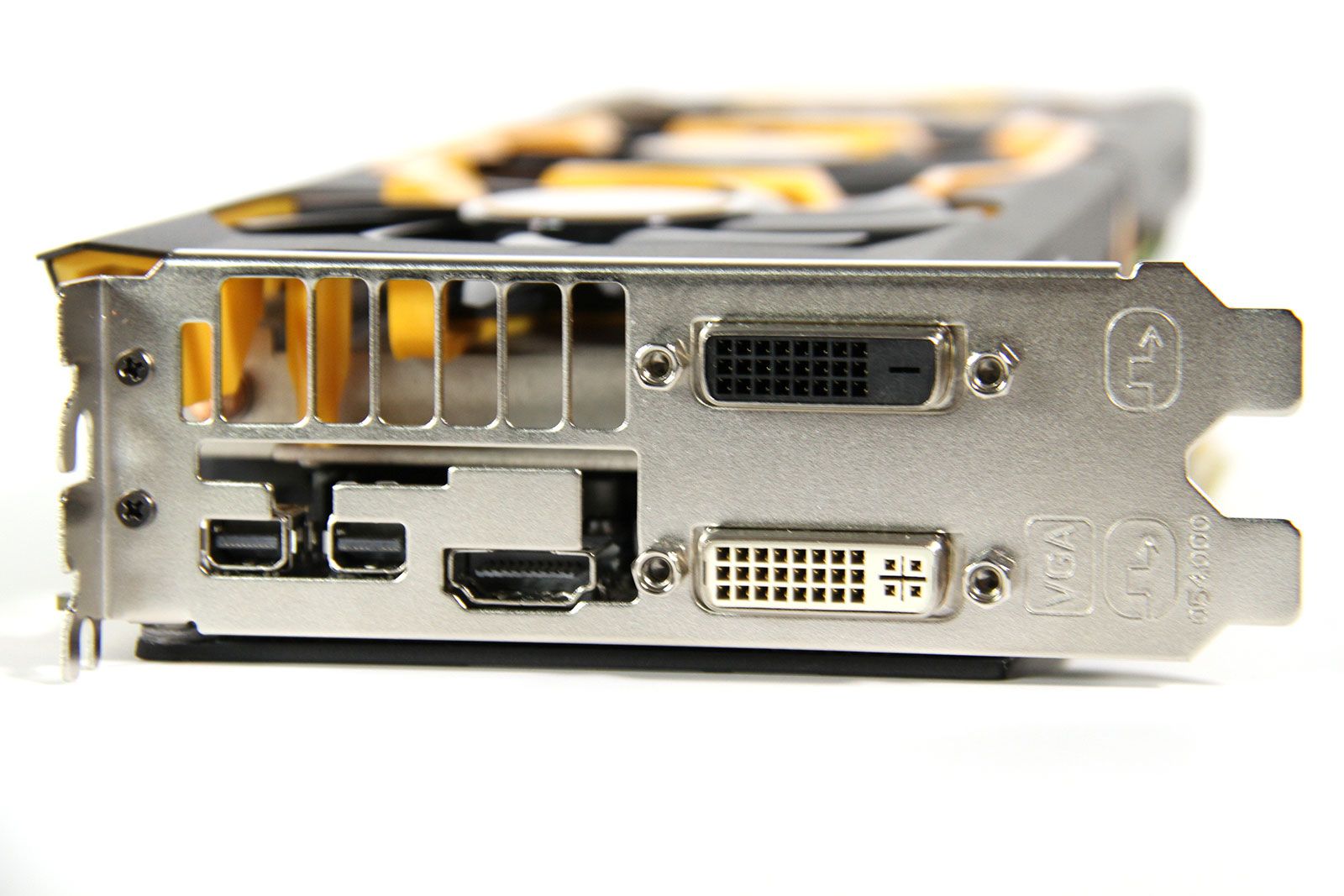 Sapphire continues to innovate on its R9 280X TOXIC by including 5 difference display outputs including dual DL-DVI, a full size HDMI port, and a pair of mini DisplayPorts.  I would guess that only four of these outputs can be utilized at any given time. 5-6 panels might require a DisplayPort MST hub.