Ultraportable gaming notebook. Sound too good to be true? Let’s find out.

With few exceptions, it’s generally been taken for granted that gaming notebooks are going to be hefty devices. Portability is rarely the focus, with weight and battery life alike usually sacrificed in the interest of sheer power. But the MSI GE40 2OC—the lightest 14-inch gaming notebook currently available—seeks to compromise while retaining the gaming prowess. Trending instead toward the form factor of a large Ultrabook, the GE40 is both stylish and manageable (and perhaps affordable at around $1,300)—but can its muscle withstand the reduction in casing real estate?

While it can’t hang with the best of the 15-inch and 17-inch crowd, in context with its 14-inch peers, the GE40’s spec sheet hardly reads like it’s been the subject of any sort of game-changing handicap: 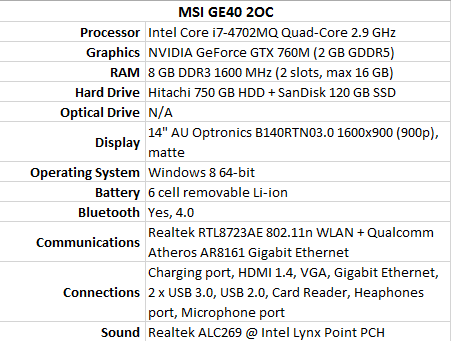 One of the most popular CPUs for Haswell gaming notebooks has been the 2.4 GHz (3.4 GHz Turbo) i7-4700MQ. But the i7-4702MQ in the GE40-20C is nearly as powerful (managing 2.2 GHz and 3.2 GHz in those same areas respectively), and it features a TDP that’s 10 W lower at just 37 W. That’s ideal for notebooks such as the GE40, which seek to provide a thinner case in conjunction with uncompromising performance. Meanwhile, the NVIDIA GTX 760M is no slouch, even if it isn’t on the same level as the 770s and 780s that we’ve been seeing in some 15.6-inch and 17.3-inch gaming beasts.

Elsewhere, it’s business as usual, with 8 GB of RAM and a 120 GB SSD rounding out the major bullet points. Nearly everything here is on par with the best of rival 14-inch gaming models with the exception of the 900p screen resolution (which is bested by some notebooks, such as Dell’s Alienware 14 and its 1080p panel). 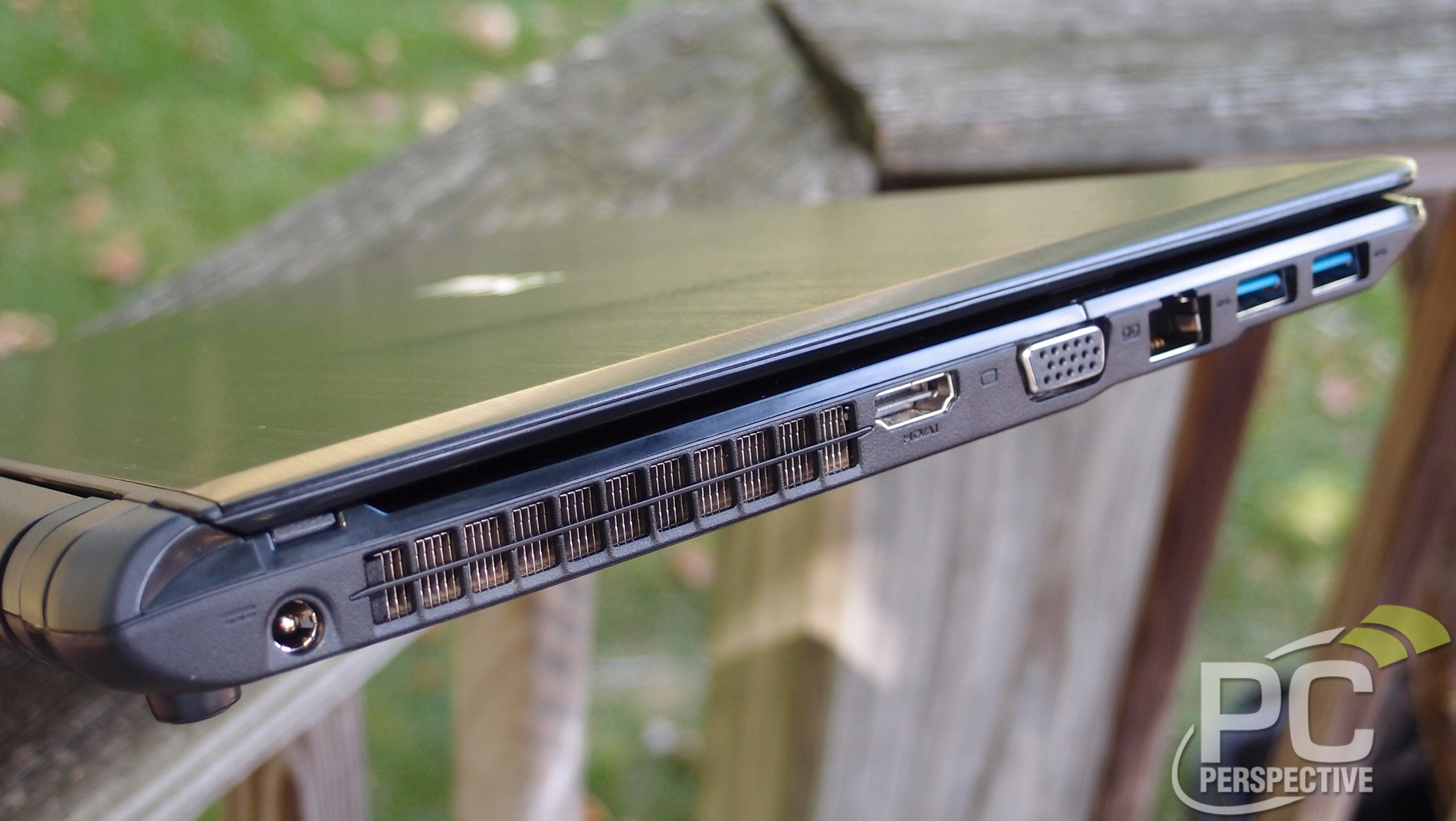 Of course, again, it’s the form factor that really sets the MSI GE40 apart from its peers; it’s considerably thinner and lighter than most 14-inch gaming notebooks. For instance, the Alienware 14 that we reference above features a starting weight of 6.116 lbs. But the GE40 tipped our scales at just under 4.3 lbs.¸ which is practically unheard of for a gaming notebook of any size (even Dell’s Alienware m11x started at 4.4 lbs.). 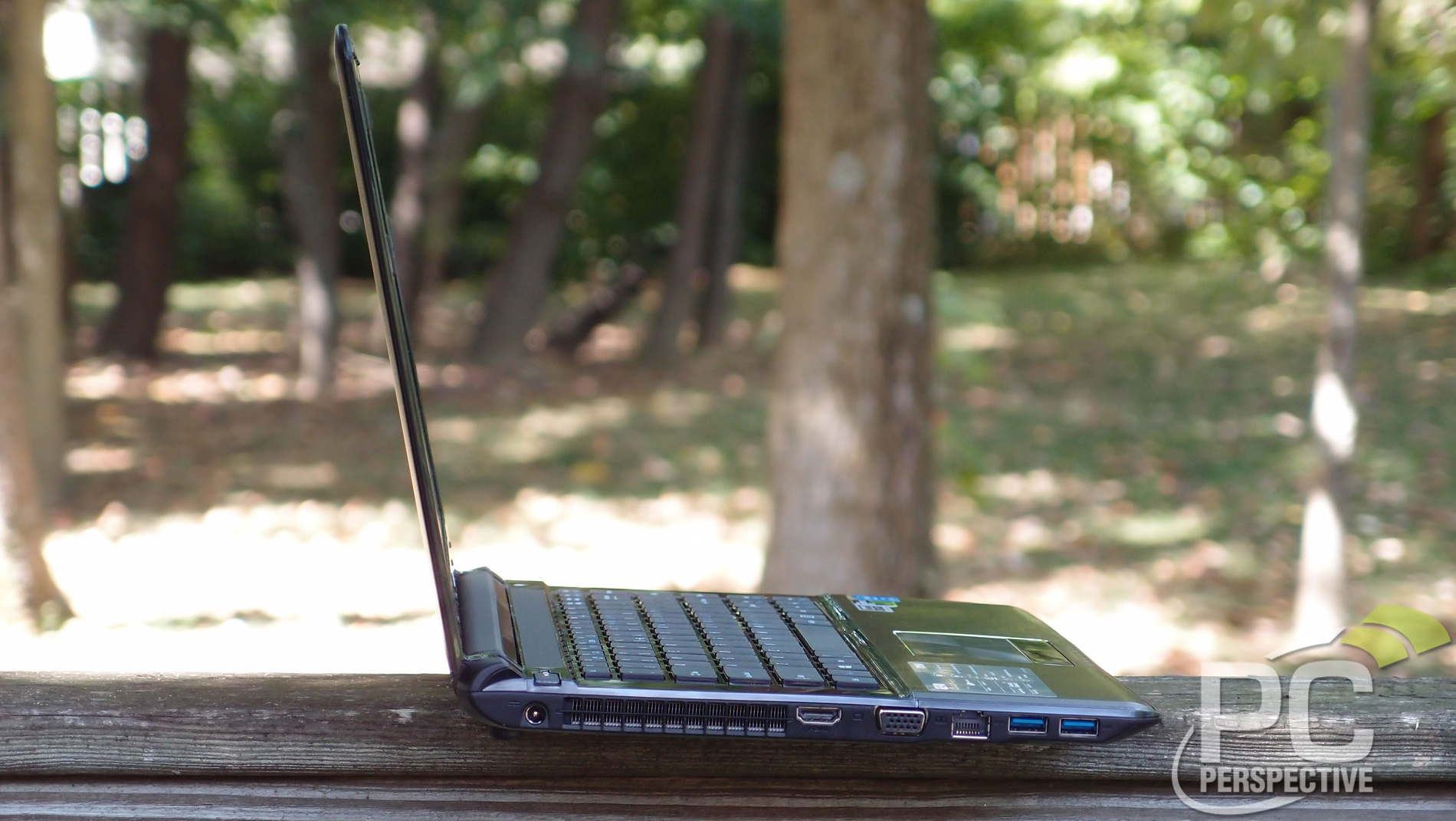 Naturally, it is a world of economics that we live in, and as such, trade-offs are ever-present in such equations. It is by way of a light plastic frame that the GE40 embraces these trade-offs, a necessary compromise in construction and durability which ultimately allows for such an impressively low weight. The sense of fragility is never overwhelming; in other words, the notebook never really comes off as cheap. However, the plastic bottom of the machine is perceptibly weaker than that of premium rivals like the Alienware. The base unit itself exhibits some degree of flex when twisted, as does the display lid, but neither seems terribly vulnerable to the throes of civil everyday use. 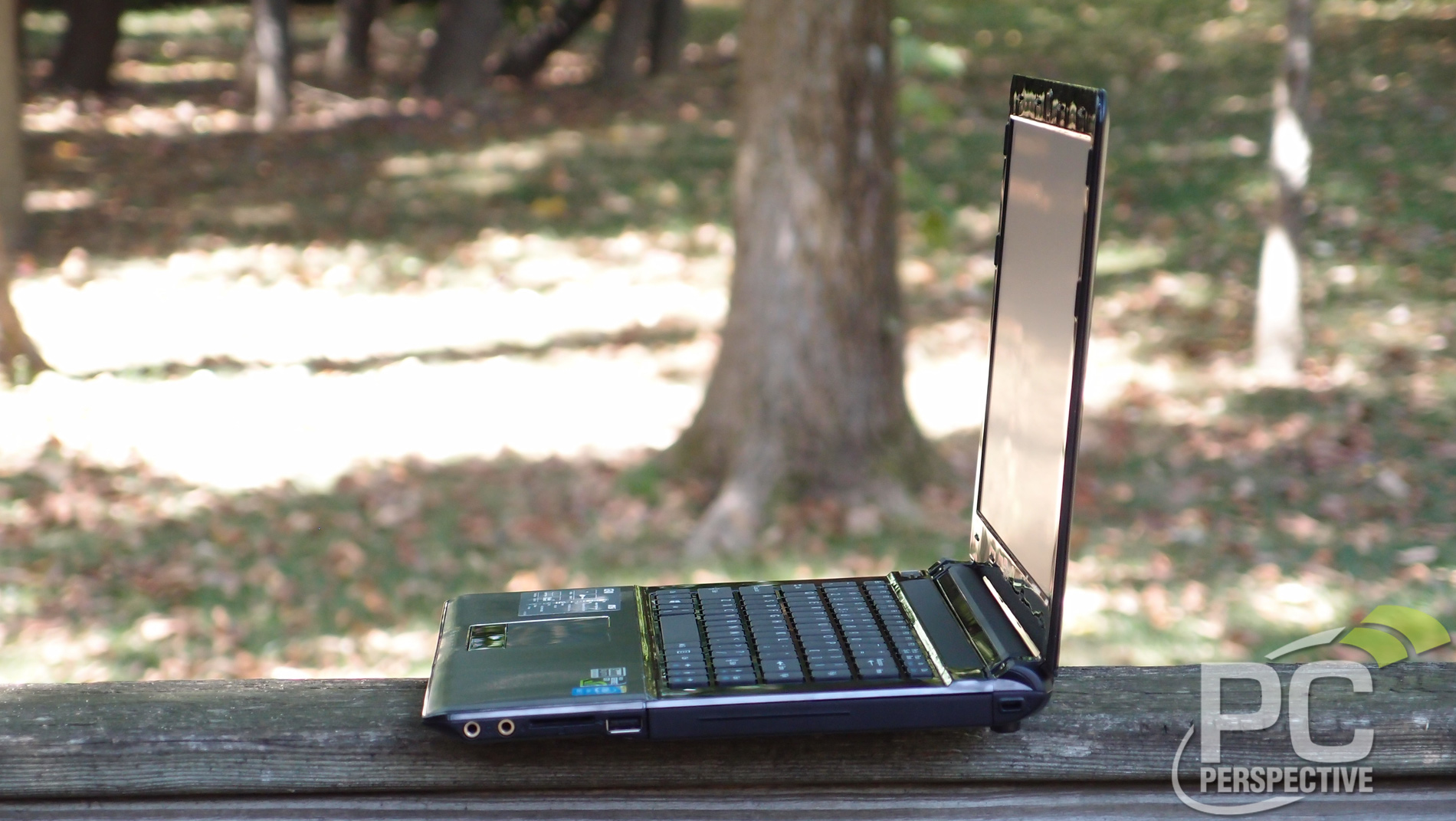 Further quelling those concerns are the brushed metal panels lining both the palm rest and display lid. Although neither probably adds much in the way of construction stability (after all, the central frame is still plastic), at the very least, the machine at least looks and feels more rigid and higher-end as a result. The curved front to the metal palm rest is much appreciated coming away from Lenovo’s Y500, with its girlie-wrist-cutting sharp front edges. The keyboard surround and display bezel are still a chintzy-looking glossy plastic that also manages to retain fingerprints far too easily. The aforementioned metal display lid, meanwhile, features dotted red cutouts that form a pair of so-called “Devil Eyes” (in fact, that’s the nickname of the model). 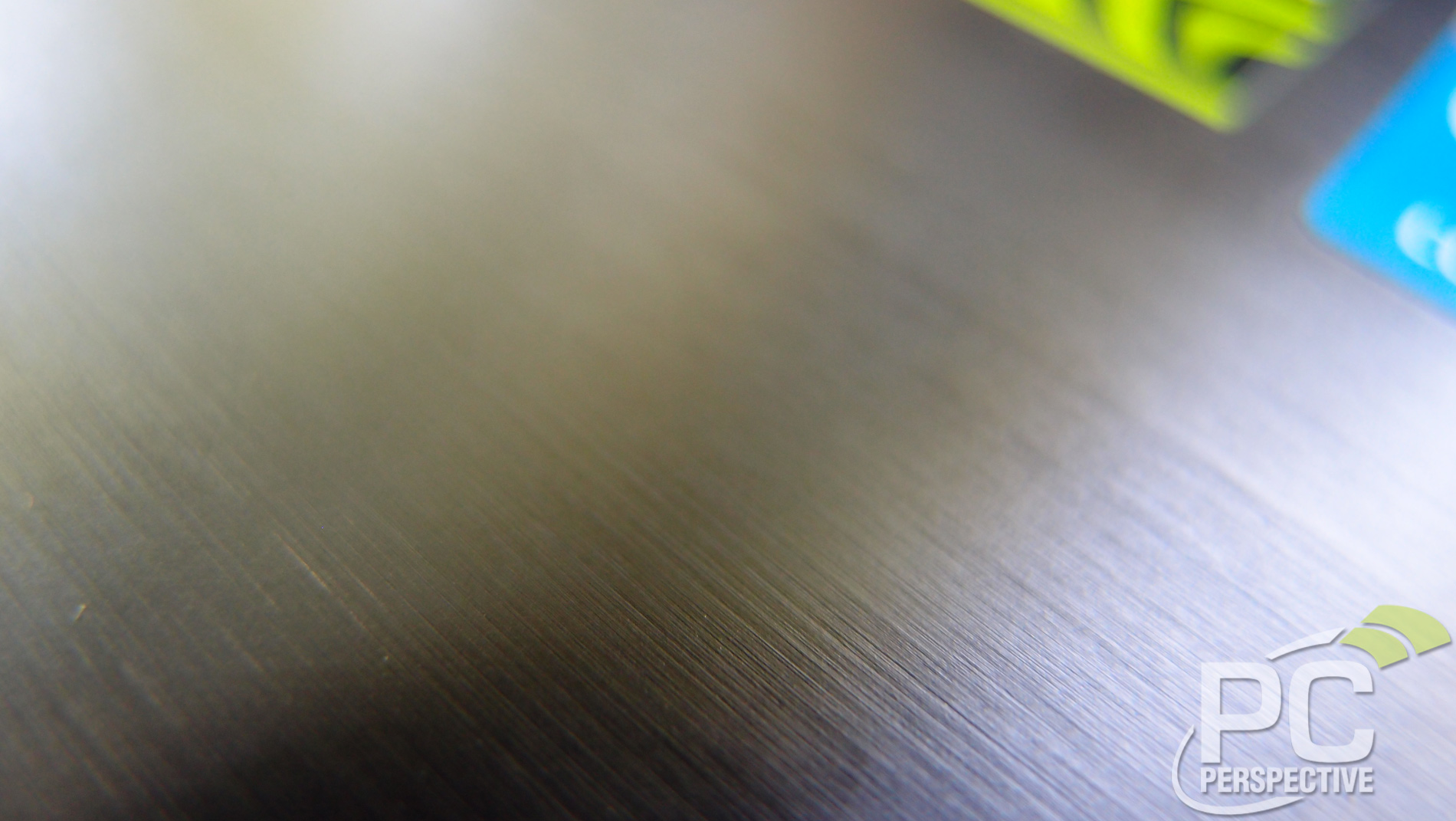 Regardless of the reasonably thin chassis, MSI still managed to squeeze in a respectable array of ports, including three USB (two USB 3.0, one USB 2.0), HDMI, VGA, Gigabit Ethernet, a card reader, separate mic and headphones ports, and finally, a Kensington Lock port. 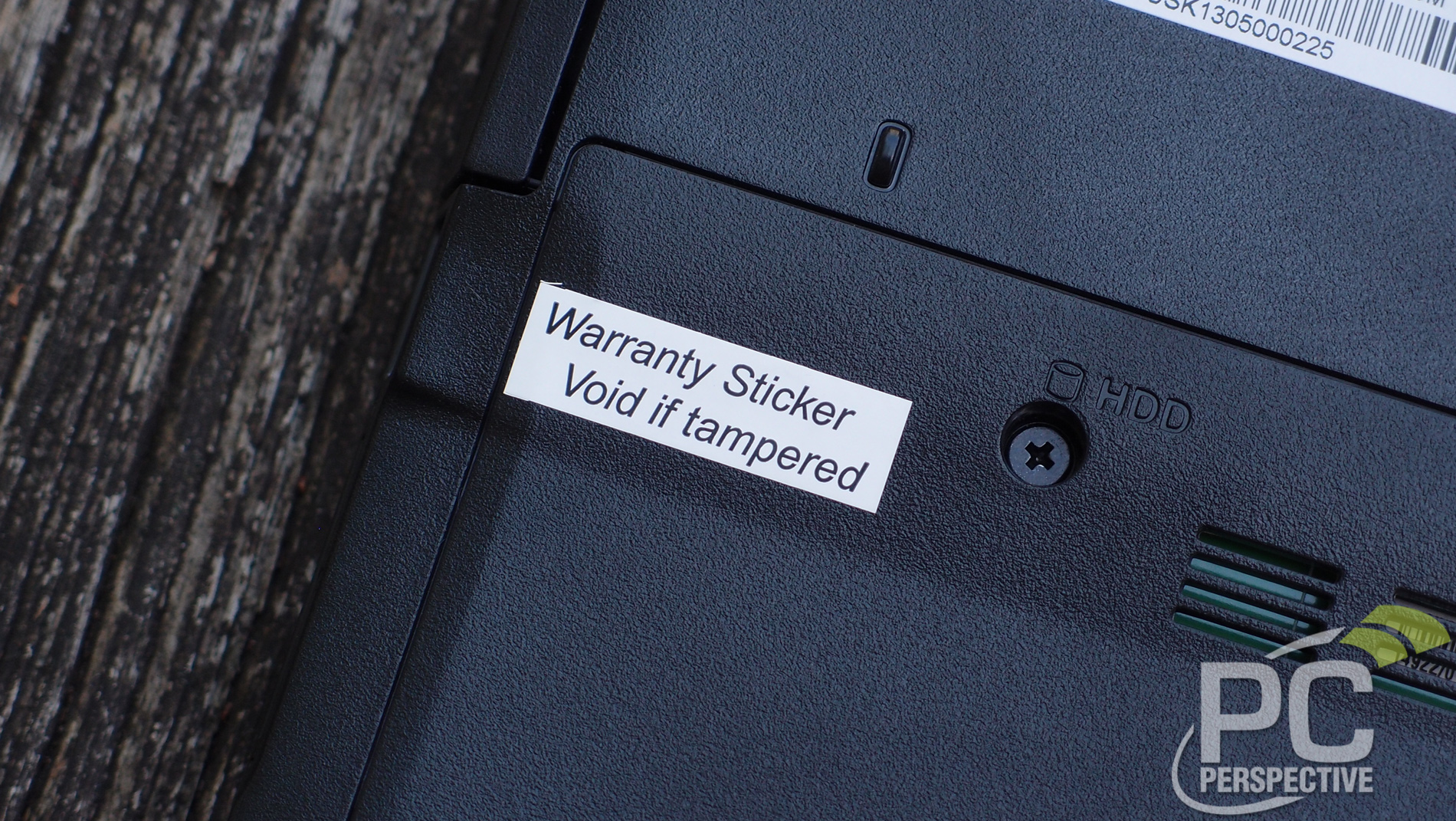 Unfortunately, they also squeezed in a warranty sticker, which (as always) proclaims the warranty void when broken. That’s a bummer as it blocks access to literally anything you might want to replace or upgrade on the machine, including the SSD, RAM, wireless card, and heatsink/fan. As usual, we urge you to strongly consider your plans for maintenance and upgrades before committing to purchasing a machine with a warranty sticker blocking the back panel.