That’s all well and good, but how does the GE40 handle games? After all, in spite of its deceptively thin design, that’s what it’s all about. We’ll throw our usual barrage of GPU benchmarks at it to see how it manages a wide range of challenges, beginning with a stress test, followed by some synthetic benchmarks, and concluding with a number of actual games.

We mentioned earlier that we witnessed temperatures of 98°C and 87°C for the CPU and GPU respectively during our full load stress test (CPU and GPU at 100%). However, only very minor throttling of the CPU kicked in, with absolutely no GPU throttling even after 30 minutes of stress. That’s a good sign for gaming, but not necessarily for the longevity of the components involved in that gaming! You can read the full results of our stress test in the Cooling section of our review (located on Page 2).

In spite of that, let’s turn next to 3DMark for some standardized assessments of the machine’s gaming performance: 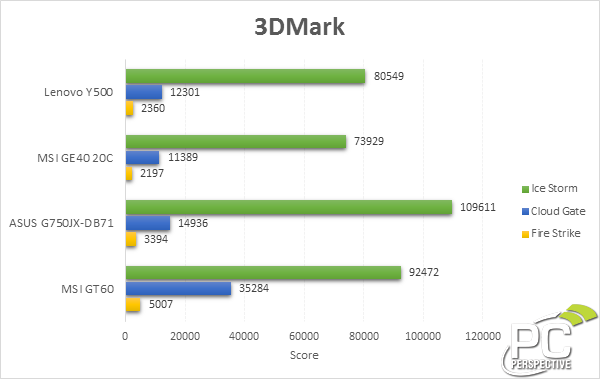 Although the MSI GT60 and ASUS G750JX-DB71 score far higher here, this performance is absolutely impressive for a 14-inch notebook of the GE40’s stature.  After all, the results are only a smidgen (roughly 10%) below that of the much larger Y500 (with its dual GT 650M setup).

For sake of comparisons with older models, let’s check out 3DMark 11 as well: 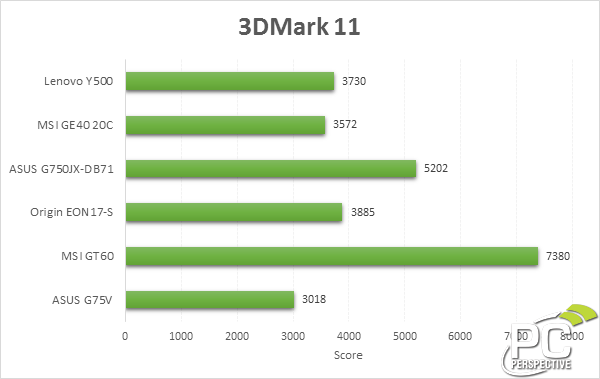 Again, well above the G75V, and hanging awfully close to the Lenovo Y500 and the enormous Origin EON17-S from last year. The GT60 (with its 4 GB NVIDIA GeForce GTX 780M) puts everyone else to shame here, as it ought to; it scores more than twice as high as the GE40.

And now for the main event! As with the G750JX-DB71 review, we’ve now expanded the field of game benchmarks to five as we continue to flesh out our newly-revamped testing routines. But we’ll start with the same classic benchmarks that we’ve relied on for a few years now for some helpful perspective.

A quick note before we begin. The 900p (1600×900) resolution of the GE40’s screen doesn’t bode well for comparisons with other gaming notebooks, as it’s a less-common resolution that is not typically tested during our benchmark routines. Thus, in many benchmarks throughout this review, we connected an external monitor so that we could record performance at 1080p instead, which enables us to compare it directly to other gaming notebooks with higher-resolution panels. The only exception to this approach is Diablo III, where our benchmark settings call for 720p (1366×768) resolution instead.

As always, our tests begin with Just Cause 2: 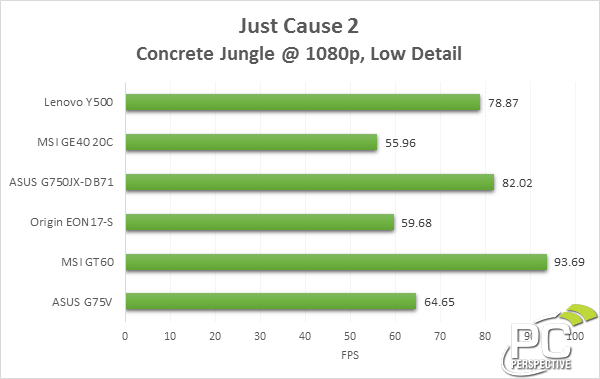 Not really a great start for the GE40 here, but then again, Just Cause 2 is a bit dated at this point. Nevertheless, it’s the weakest of the bunch, barely keeping up with gaming notebooks from over a year ago. On a brighter note, at 1600×900 and all settings Low/Off, we recorded 68 frames per second on average—meaning that you could dial up the details a bit at the native resolution and still end up with fluid gameplay performance.

Let’s move on to StarCraft II: 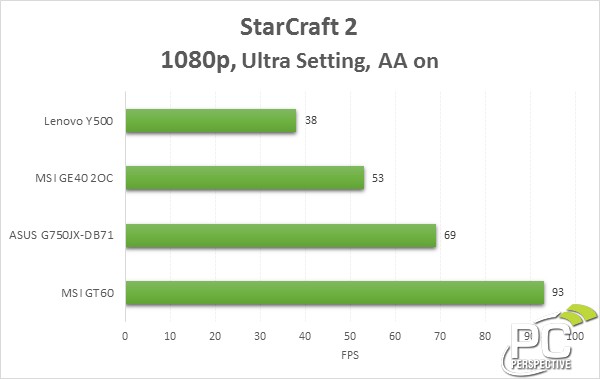 Again (as a reminder), this benchmark was performed at 1080p to facilitate comparisons with other recent gaming notebooks. Results here are encouraging; while the Y500 was a disappointment in this test, the GE40 is within throwing distance of the G750JX, which only places around 30% higher. The GT60 (as usual) leaves everyone else far behind, with a score of nearly double that of the GE40.

Next up, Diablo III: 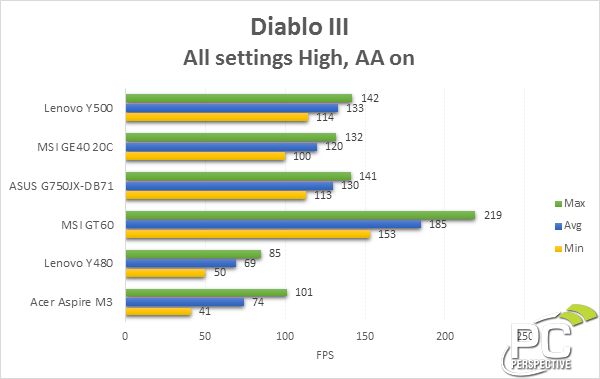 We always perform this benchmark at 720p for sake of comparison with older and weaker notebooks. We’re treated to a respectable showing by the GE40, which falls neatly in line between the Y500 and G750JX.

Next, time for a LAN party in the subways: 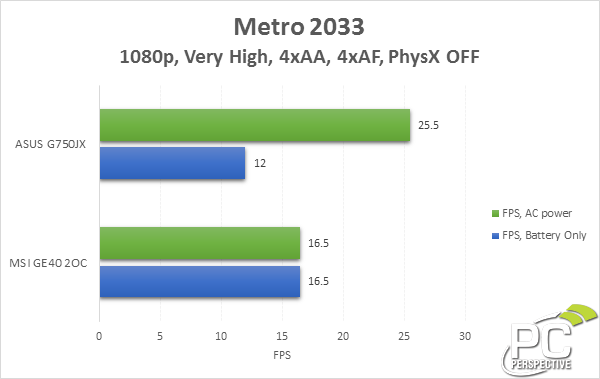 We’ve only performed this benchmark (and the next one) on one other notebook to date, and that’s the ASUS G750JX-DB71. We ran it both on AC power and unplugged to illustrate the problems with the G750JX on battery only. The GE40 has no such TDP-constrained performance issues, though its temperature concerns are a wholly different subject. Still, performance-wise, even heavy games such as Metro don’t provide evidence of any real throttling—just some high temperatures (as expected). The GE40 certainly can’t handle this game on Very High at 1080p, but then again, it isn’t likely to have to do so in reality. Nevertheless, for sake of comparison, we can see that the G750JX is around 54% faster in Metro than the GE40.

What about at lower resolutions, then, you ask? We checked that too. At 1600×900 (native resolution), DX11, all settings Low, 4xAA, 4xAF, and PhysX disabled, the result was 40.5—far more palatable. At 720p, it bumps up another 10 fps to 50.5. The game is certainly playable, then, at native resolution, though it won’t likely remain fluid at anything but low settings.

Finally, the last game we tested today was the excellent and quite popular Bioshock Infinite: 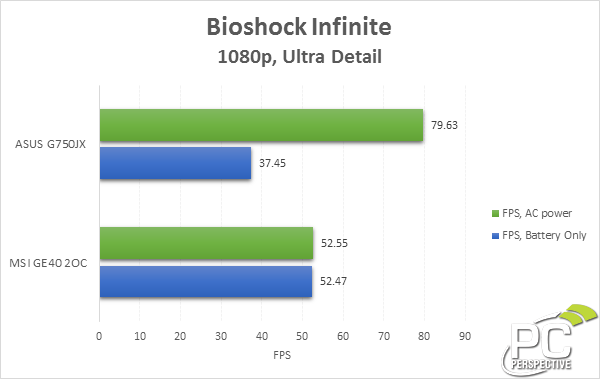 Yet again, this test was performed at 1080p using an external monitor. Results are impressive to say the least; 53 fps is most certainly playable, and that’s on Ultra detail, to boot. Moving down to the native resolution of 1600×900 only buys you another 5 frames per second, which is interesting. As for comparisons to the G750JX, the ASUS is 51% better with nearly 80 fps. Still, these results are impressive for a notebook of this size.

Samsung’s take on the Atom