Amazon Web Services allows customers (individuals, organizations, or companies) to rent servers of certain qualities to match their needs. Many websites are hosted at their data centers, mostly because you can purchase different (or multiple) servers if you have big variations in traffic.

I, personally, sometimes use it as a game server for scheduled multiplayer events. The traditional method is spending $50-80 USD per month on a… decent… server running all-day every-day and using it a couple of hours per week. With Amazon EC2, we hosted a 200 player event (100 vs 100) by purchasing a dual-Xeon (ironically the fastest single-threaded instance) server connected to Amazon's internet backbone by 10 Gigabit Ethernet. This server cost just under $5 per hour all expenses considered. It was not much of a discount but it ran like butter.

This leads me to today's story: NVIDIA GRID GPUs are now available at Amazon Web Services. Both companies hope their customers will use (or create services based on) these instances. Applications they expect to see are streamed games, CAD and media creation, and other server-side graphics processing. These Kepler-based instances, named "g2.2xlarge", will be available along side the older Fermi-based Cluster Compute Instances ("cg1.4xlarge").

It is also noteworthy that the older Fermi-based Tesla servers are about 4x as expensive. GRID GPUs are based on GK104 (or GK107, but those are not available on Amazon EC2) and not the more compute-intensive GK110. It would probably be a step backwards for customers intending to perform GPGPU workloads for computational science or "big data" analysis. The newer GRID systems do not have 10 Gigabit Ethernet, either.

So what does it have? Well, I created an AWS instance to find out. 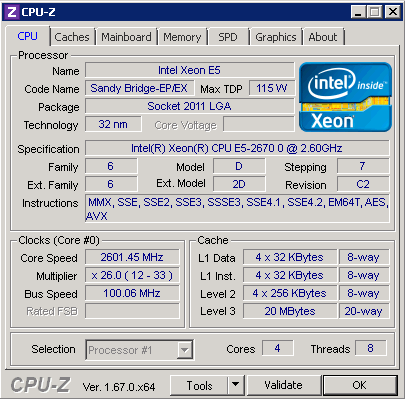 Its CPU is advertised as an Intel E5-2670 with 8 threads and 26 Compute Units (CUs). This is particularly odd as that particular CPU is eight-core with 16 threads; it is also usually rated by Amazon at 22 CUs per 8 threads. This made me wonder whether the CPU is split between two clients or if Amazon disabled Hyper-Threading to push the clock rates higher (and ultimately led me to just log in to an instance and see). As it turns out, HT is still enabled and the processor registers as having 4 physical cores.

The GPU was slightly more… complicated. 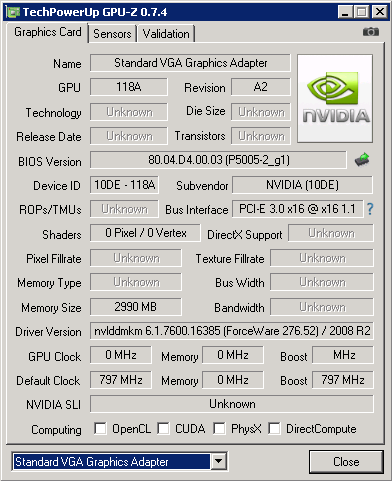 NVIDIA control panel apparently does not work over remote desktop and the GPU registers as a "Standard VGA Graphics Adapter". Actually, two are available in Device Manager although one has the yellow exclamation mark of driver woe (random integrated graphics that wasn't disabled in BIOS?). GPU-Z was not able to pick much up from it but it was of some help.

Keep in mind: I did this without contacting either Amazon or NVIDIA. It is entirely possible that the OS I used (Windows Server 2008 R2) was a poor choice. OTOY, as a part of this announcement, offers Amazon Machine Image (AMI)s for Linux and Windows installations integrated with their ORBX middleware.

I spot three key pieces of information: The base clock is 797 MHz, the memory size is 2990 MB, and the default drivers are Forceware 276.52 (??). The core and default clock rate, GK104 and 797 MHz respectively, are characteristic of the GRID K520 GPU with its 2 GK104 GPUs clocked at 800 MHz. However, since the K520 gives each GPU 4GB and this instance only has 3GB of vRAM, I can tell that the product is slightly different.

I was unable to query the device's shader count. The K520 (similar to a GeForce 680) has 1536 per GPU which sounds about right (but, again, pure speculation).

I also tested the server with TCPing to measure its networking performance versus the cluster compute instances. I did not do anything like Speedtest or Netalyzr. With a normal cluster instance I achieve about 20-25ms pings; with this instance I was more in the 45-50ms range. Of course, your mileage may vary and this should not be used as any official benchmark. If you are considering using the instance for your product, launch an instance and run your own tests. It is not expensive. Still, it seems to be less responsive than Cluster Compute instances which is odd considering its intended gaming usage.

Regardless, now that Amazon picked up GRID, we might see more services (be it consumer or enterprise) which utilizes this technology. The new GPU instances start at $0.65/hr for Linux and $0.767/hr for Windows (excluding extra charges like network bandwidth) on demand. Like always with EC2, if you will use these instances a lot, you can get reduced rates if you pay a fee upfront.

Official press blast after the break.

AWS is offering an NVIDIA GRID GPU instance, known as the G2 instance, via its Amazon EC2 cloud, starting today.

"AWS sees a growing benefit for adding GPUs to our cloud," said Matt Wood, general manager of Data Science at AWS. "The NVIDIA GRID GPUs in our new G2 instances enable graphical applications to be rendered in the AWS cloud and streamed to a world with increasing internet bandwidth and proliferation of device types."

Designed for cloud computing, NVIDIA GRID GPUs make possible a new generation of GPU-accelerated SaaS applications — such as virtual workstations, accelerated virtual desktops and gaming-as-a-service. Based on the NVIDIA Kepler™ architecture, GRID GPUs include a powerful H.264 encoding engine that lets high-resolution graphics be compressed in real time and streamed to any internet-connected display.

As a result, internet-connected devices — such as PCs, Macs, tablets, the NVIDIA SHIELD™, smart TVs, micro-consoles or smartphones — can tap the tremendous power of GPUs to meet the needs of scientists, researchers, designers, engineers, gamers and more.

"Cloud computing has reached an inflection point driven by the growing variety of devices that can take advantage of application streaming," said Jeff Brown, vice president and general manager of the Professional Visualization business at NVIDIA. "By using the graphics horsepower of NVIDIA GRID on AWS, companies can stream applications to more customers on more screens with a lower barrier to entry."

To make it easy for software companies to deploy applications onto G2 instances, OTOY has enabled a Windows- and Linux-based Amazon Machine Image (AMI) with OTOY’s ORBX middleware. SaaS companies can install their applications into OTOY’s AMI and begin streaming to web browsers within minutes.

To demonstrate the potential of app streaming on NVIDIA GRID, OTOY and Autodesk are collaborating on technology that offers Autodesk’s most popular design applications through an OTOY AMI.

More information on NVIDIA GRID is available at www.nvidia.com/grid .

About NVIDIA
Since 1993, NVIDIA (NASDAQ: NVDA) has pioneered the art and science of visual computing. The company’s technologies are transforming a world of displays into a world of interactive discovery — for everyone from gamers to scientists, and consumers to enterprise customers. More information at http://nvidianews.nvidia.com and http://blogs.nvidia.com . 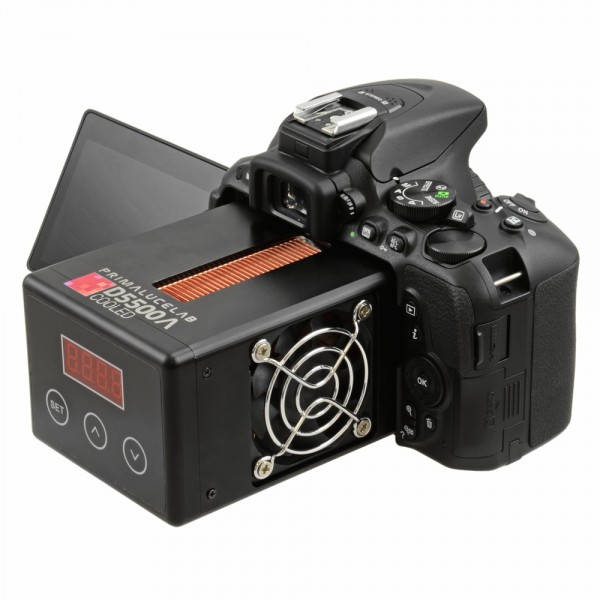