Just like the reference models of the R9 290X, the ASUS DirectCU II model has a BIOS switch on the top meant to interchange BIOS settings.  The switch in the default position (away from the output connectors) indicates the card is in Performance Mode while the switch in the opposite position (towards the output connectors) puts the card into a Quiet mode.  Sound familiar?  It might but the behaviors are very different than the first 290X cards. 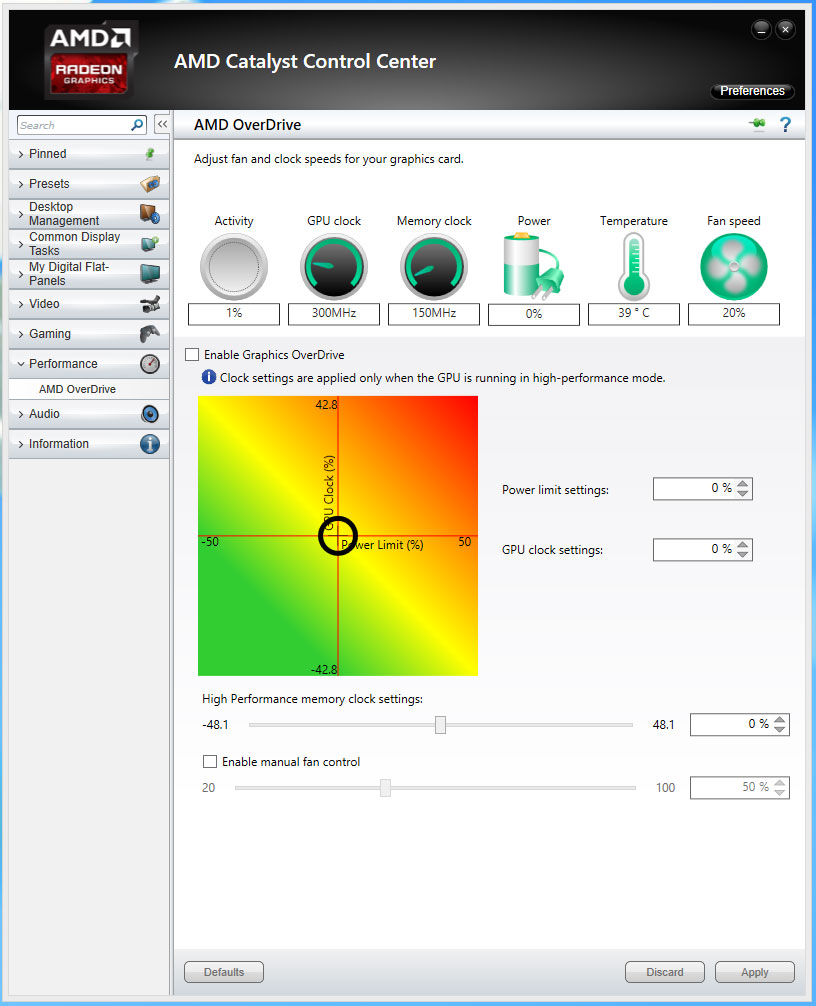 Here in performance mode, you'll notice that the AMD Catalyst Control Center doesn't list a target GPU temperature and also defaults to having the maximum fan speed at 50%.  Don't be scared though!  These fans are MUCH more quiet than the reference cards. 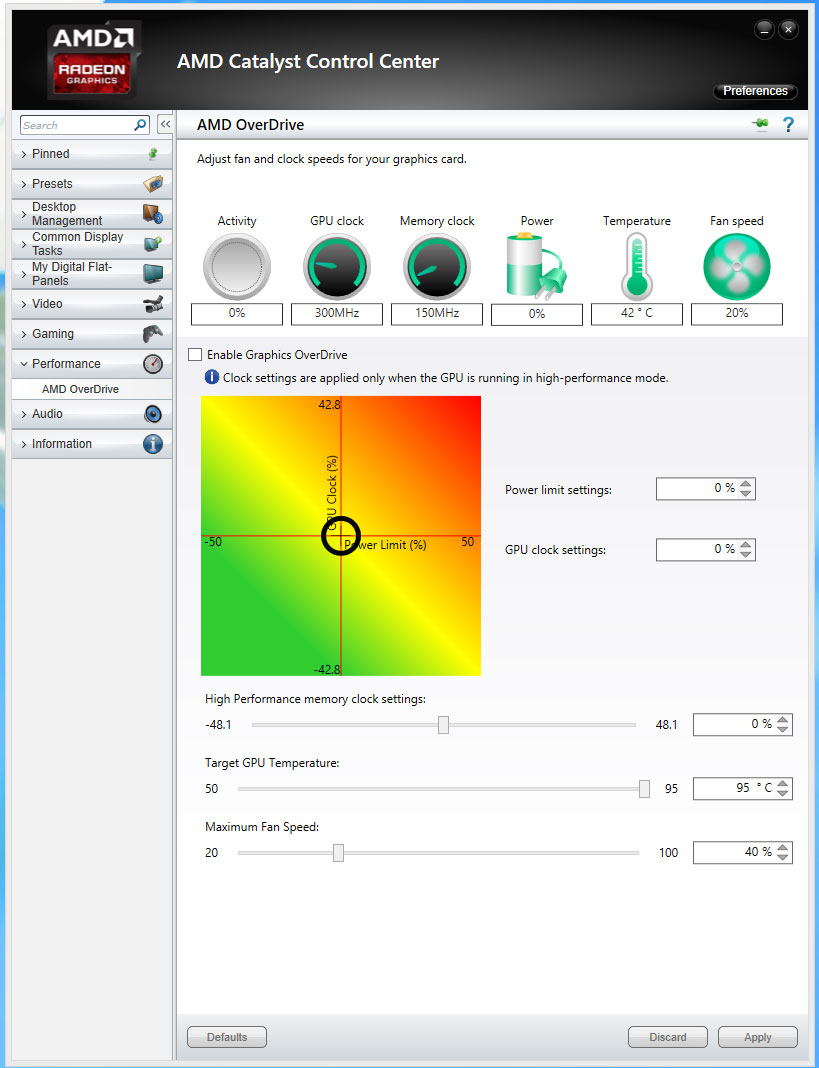 In the quiet mode you have the same settings that we saw previously with a target GPU temperature of 95C and a maximum fan speed of 40%.

Clock Speed Variance – Is it fixed??

First things first, let's look at how the clock speeds vary on the ASUS R9 290X DirectCU II.  To see this over an extended period of time, we are looking at 25 minutes of consistent, looped gameplay in Metro: Last Light.  This is the same testing loop utilized in our discussion of the 290X variance problems from last month.  We'll be compare this new custom R9 290X from ASUS to the reference card we got from AMD initially as well as the Sapphire R9 290X that we purchased ourselves that uses the stock cooler.

For this test, all three cards are in their default state.  That means the sampled and Sapphire R9 290X are in Quiet mode while the R9 290X is in performance mode.  More on that below. 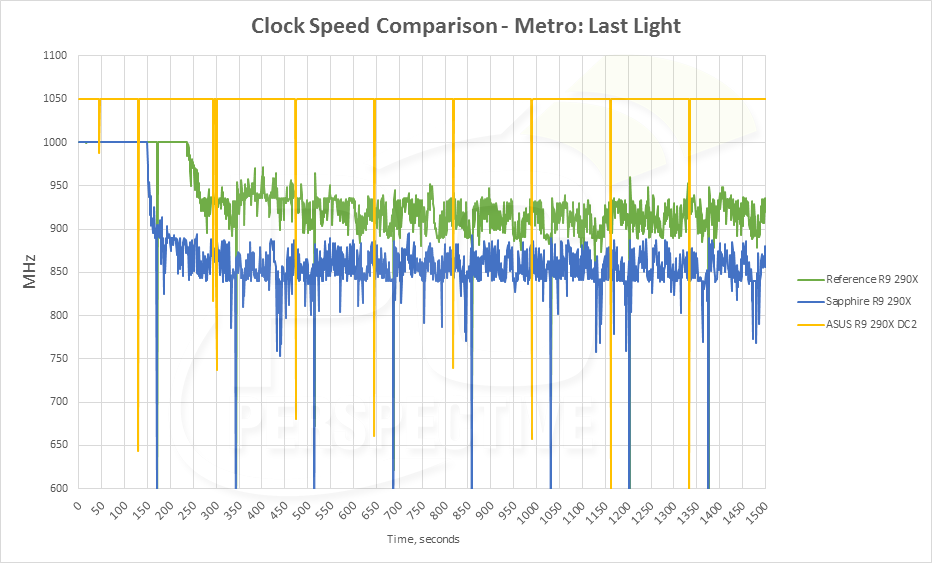 Well look at that, the ASUS R9 290X is quite the champ!  Throughout our 25 minute session of Metro: Last Light it stays at the 1050 MHz frequency pretty much the whole time with only the occasional dip to something in the 600-700s when the level reloads.

What does this mean?  The custom cooled R9 290X DirectCU II from ASUS is the first R9 290X we have seen to consistently run at its rated frequency and as a result it will be among the fastest cards we have ever tested! 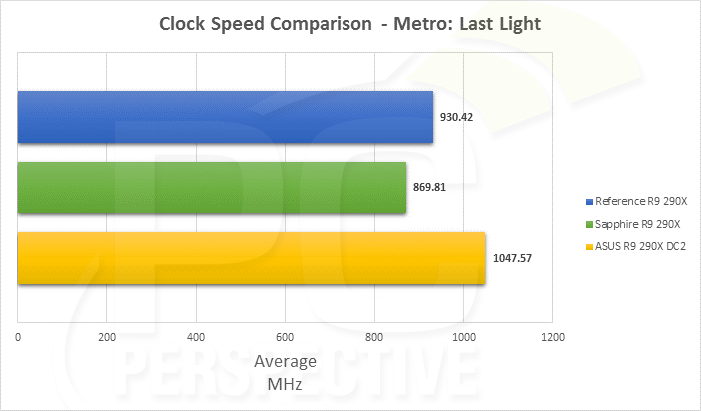 I do realize that the default clock of the ASUS DC2 card is 1050 MHz while both the press sampled and Sapphire reference cards are rated at "up to" 1000 MHz and that results in a 5% delta out the gate.  Still, it is clear based on the clock speed comparison graph above that the stock blower cooler was never up to the task of keeping the Hawaii GPU in the thermal envelope it needed to be. 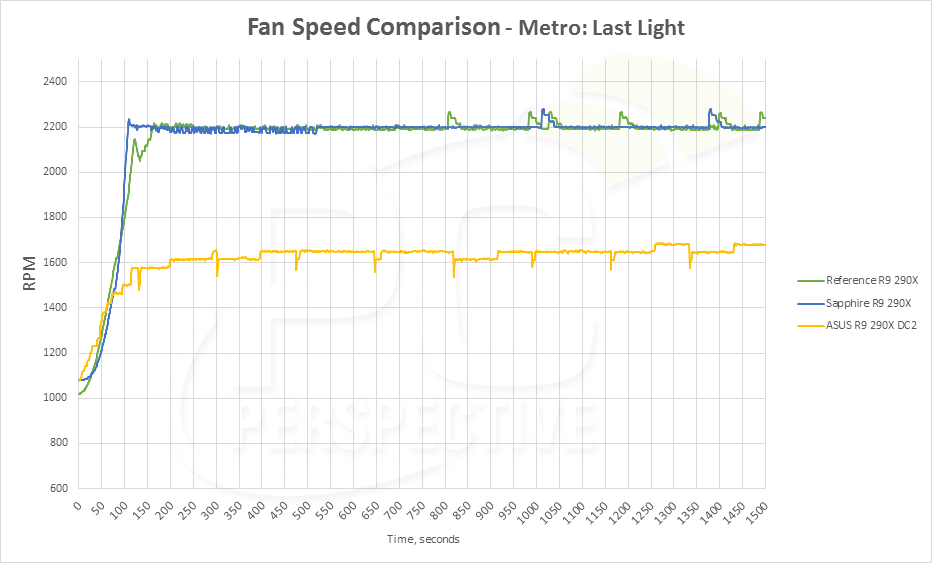 Keeping mind that these are totally different cooler designs, the ASUS card is able to maintain a 1050 MHz clock speed with a fan speed of just 1600 RPM or so, though we do have TWO fans.  How do that effect sound levels? 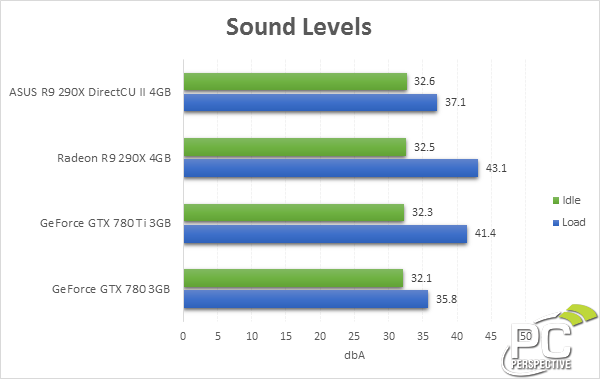 As it turns out, the DirectCU II cooler, in performance mode, is significantly more quiet than the reference cooler in quiet mode.  Think about that for just a second.  Okay, let's move on.

The custom built ASUS R9 290X is 6 full dbA lower in our noise testing than the reference R9 290X and is even able to come in under the sound levels of the GTX 780 Ti.  It's still louder than the original GTX 780 that runs at a lower fan speed, but it's pretty close.

In my testing, the R9 290X provided about as good of a sound experience of any high end graphics card we have tested in the past year.  This is exactly where the AMD R9 290X should have been the whole time. 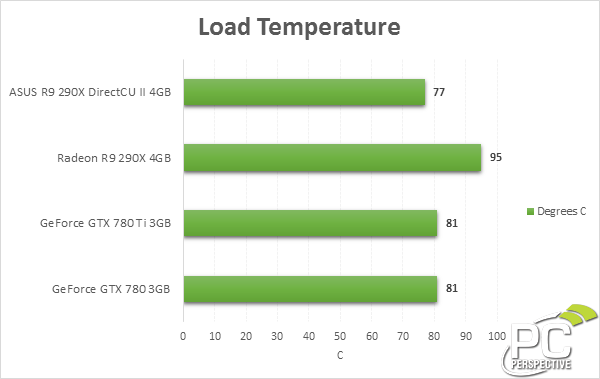 Another huge benefit you get with the ASUS DirectCU II is lower temperatures.  Not only does this card run faster than the reference, and quieter, it is doing all of that while keeping the GPU at a temperature 18C lower than the reference cooler.  This is nothing to balk at or just dismiss, this is serious improvement by ASUS. 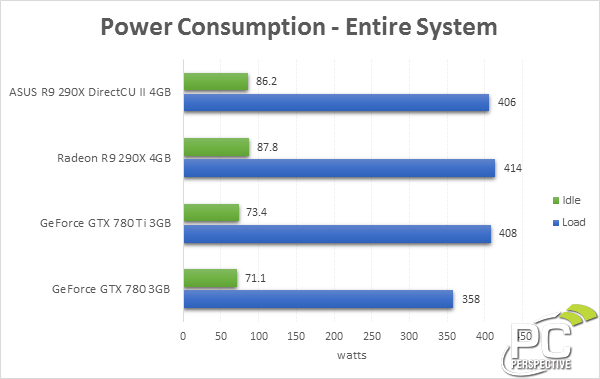 Finally, does all of this come at the cost of power consumption?  Not really – the ASUS DC2 was actually drawing a few watts lower power than the reference card in our testing under a full load.

How does the Quiet Mode change things?

Though we did all of our primary testing with the switch in its default state, Performance mode, Quiet mode has some interesting characteristics worth noting. 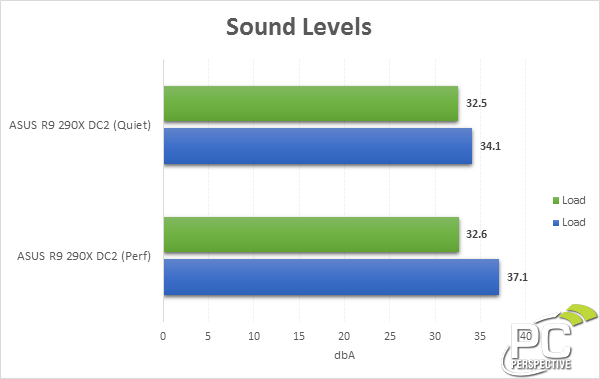 Sound levels in the quiet mode are, well, quieter (as you would expect).  The jump from 37.1 dbA to 34.1 dbA isn't as big as the move from the reference 290X to the ASUS custom card but the noise difference is still noticeable. 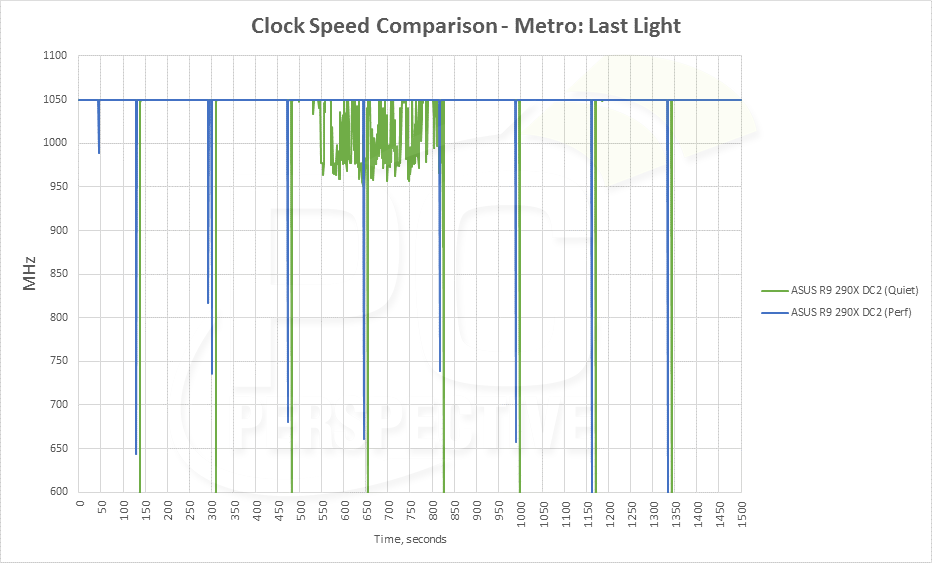 The clock speeds reported over the same 25 minute period are interesting.  For most of the recorded period, the ASUS R9 290X DirectCU II in quiet mode is able to maintain the same 1050 MHz clock speed as it does in the performance mode.  Between the 550 and 850 second period though there is some obvious throttling the occurs with clock speeds going to nearly 950 MHz.  Even though that is definitely going to cause performance drops, it is nothing close to the 830 MHz clocks we saw with the Sapphire reference cooler testing last month.

The clock speed does eventually restabilize at 1050 MHz though for reasons you'll see below. 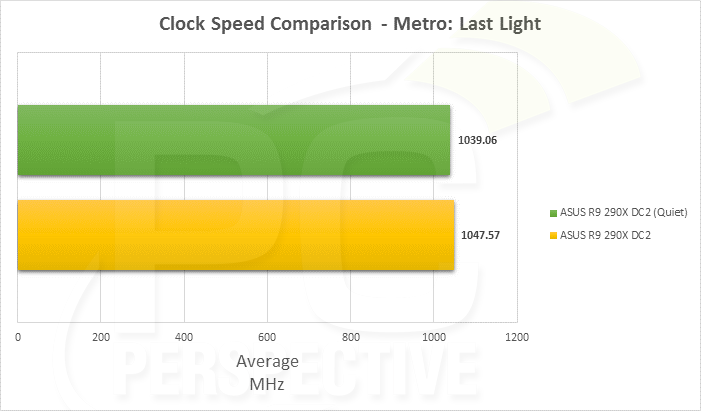 Even with that clock speed variance above, the average frame rate of the ASUS DC2 card in quiet mode is only 8 MHz lower over the entire 25 minutes testing period. 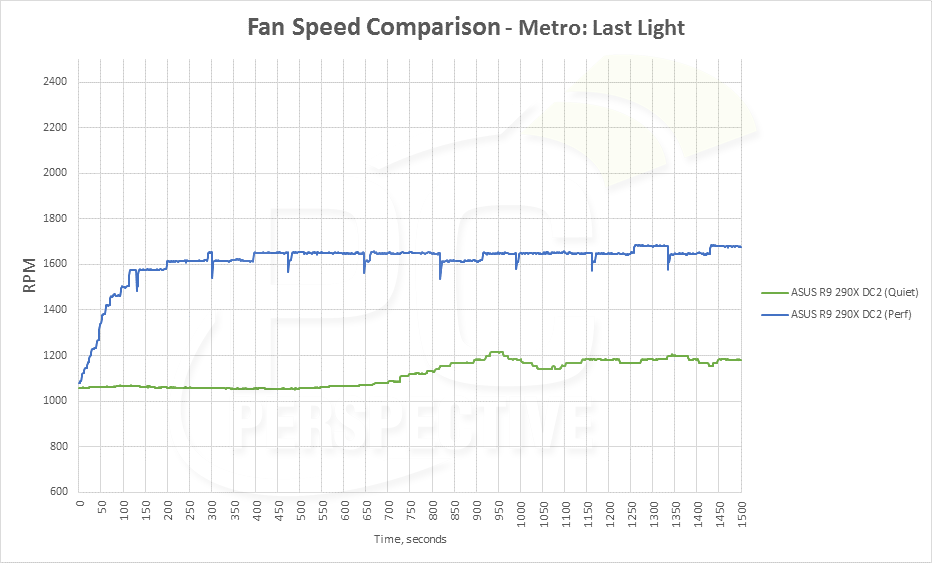 In order to hit just 34.1 dbA in quiet mode, the ASUS card only briefing breaches the 1200 RPM mark at about the 950 seconds.  It then drops again and seems to find a stable spot at 1180 RPM or so. 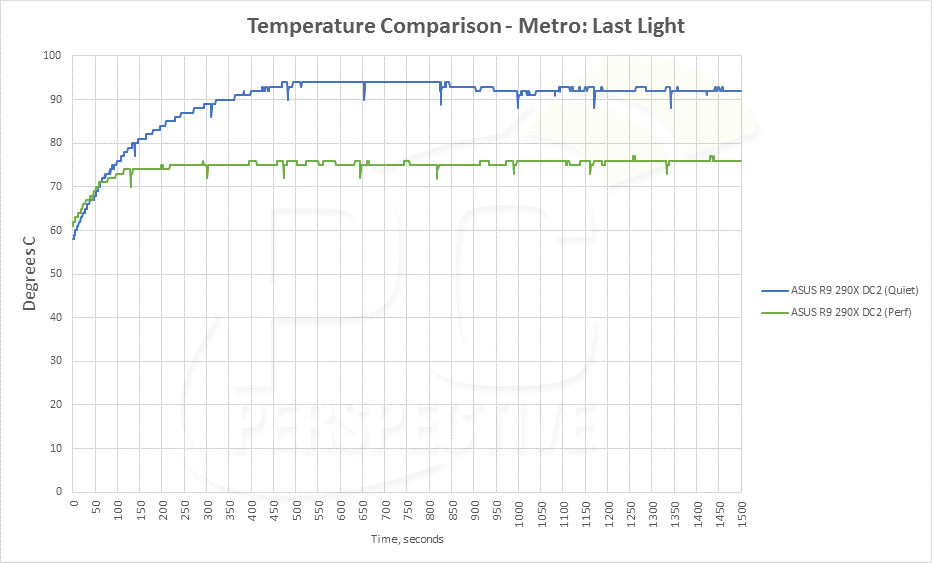 How can the ASUS card maintain the same performance levels (or close to the same performance levels) with lower noise in quiet mode?  By allowing the GPU to hit higher temperatures.  In performance mode our GPU hits the 76-77C mark towards the end of its 25 minute test run while in quiet mode ASUS allows the GPU to 94C.  It is not a coincidence that it happens in the same 650-850 second window where we saw the clock speed come down and the fan speed quickly ramp up.  The DC2 card then finds the best spot for it to maintain 1050 MHz with a 92C temperature and ~1200 RPM fan speed.  This is AMD PowerTune at work!

This creates an interesting choice for the gamer – you can basically get the same 1050 MHz clock speeds from the ASUS R9 290X DirectCU II by either allowing the GPU to hit 94C and getting lower noise levels OR by keeping the GPU cooler (around 77C) with higher noise levels.  The key this time is that performance is nearly identical in both cases and that both the Quiet and Performance defaults have dramatically improved noise levels compared to the AMD R9 290X reference "quiet" mode.