The lower-grade variety of Lenovo’s AccuType keyboard makes a return on the Flex 14, though it’s not identical to that of the Yoga 11S. Thanks to a more accommodating base unit width, the keyboard feels less scrunched than the 11S, with larger Function keys, Tab, CapsLk, Left Shift, Fn, Space Bar, and arrow keys, among some others as well. In the meantime, some of the ancillary keys (such as PgUp/PgDown, Insert, Home, and End) have been moved to more logical locations, and keys such as ScrLk and Break stage a return from the afterlife. Overall, the layout feels much more practical than that of the smaller Yoga notebooks we previously reviewed. 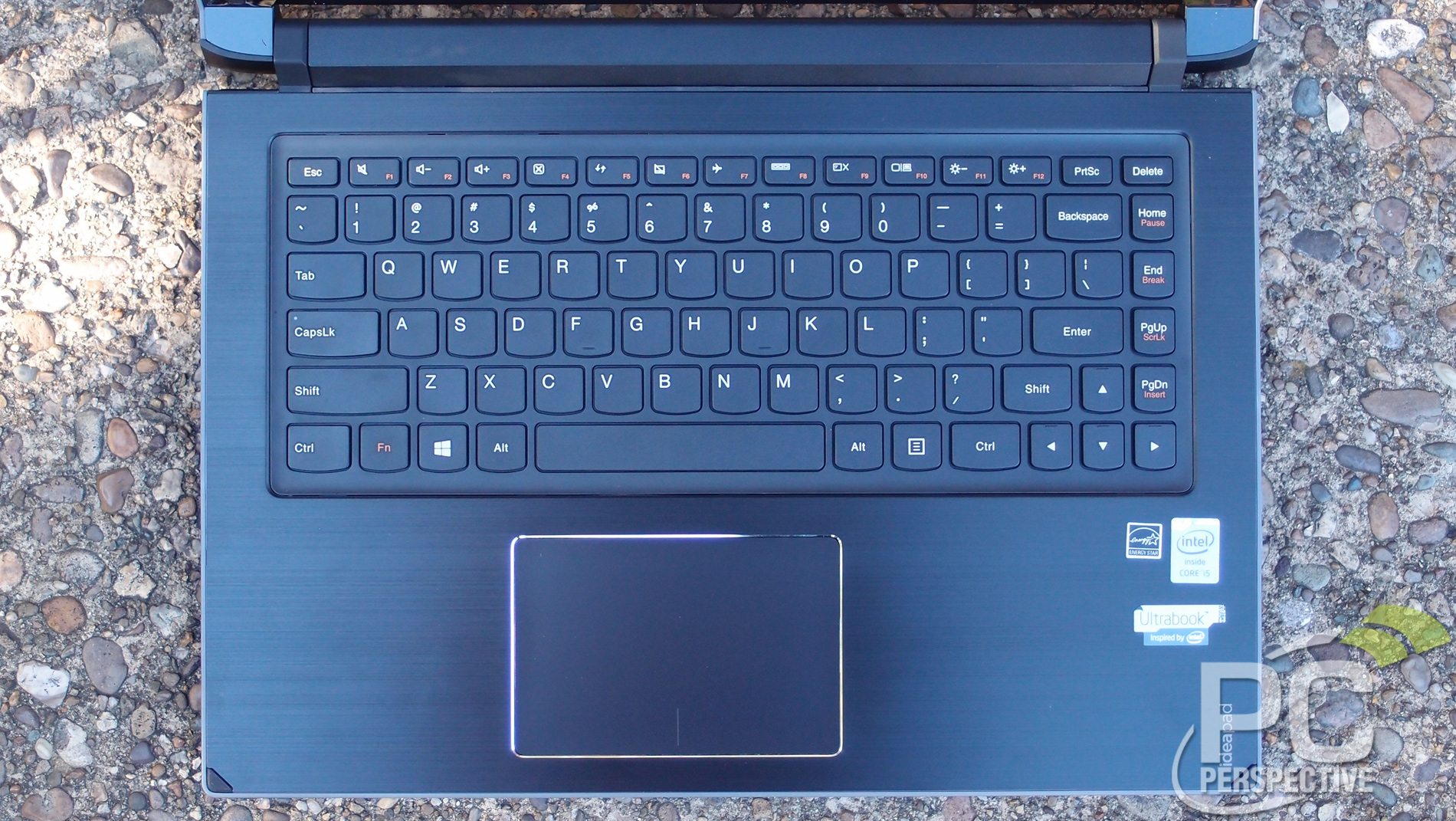 Still, the rest of the keyboard operation remains mediocre, with a particularly shallow travel distance only partially offset by a distinct stop. In conjunction with a relatively weak actuation force, this translates to a low degree of feedback during typing, making erroneous keystrokes more numerous than is optimal, and just generally requiring more practice and acclimation by the user before they can finally feel comfortable using the machine. It’s not a bad keyboard, but it’s a far cry from the ThinkPad-grade AccuType models and and premium Latitude offerings. 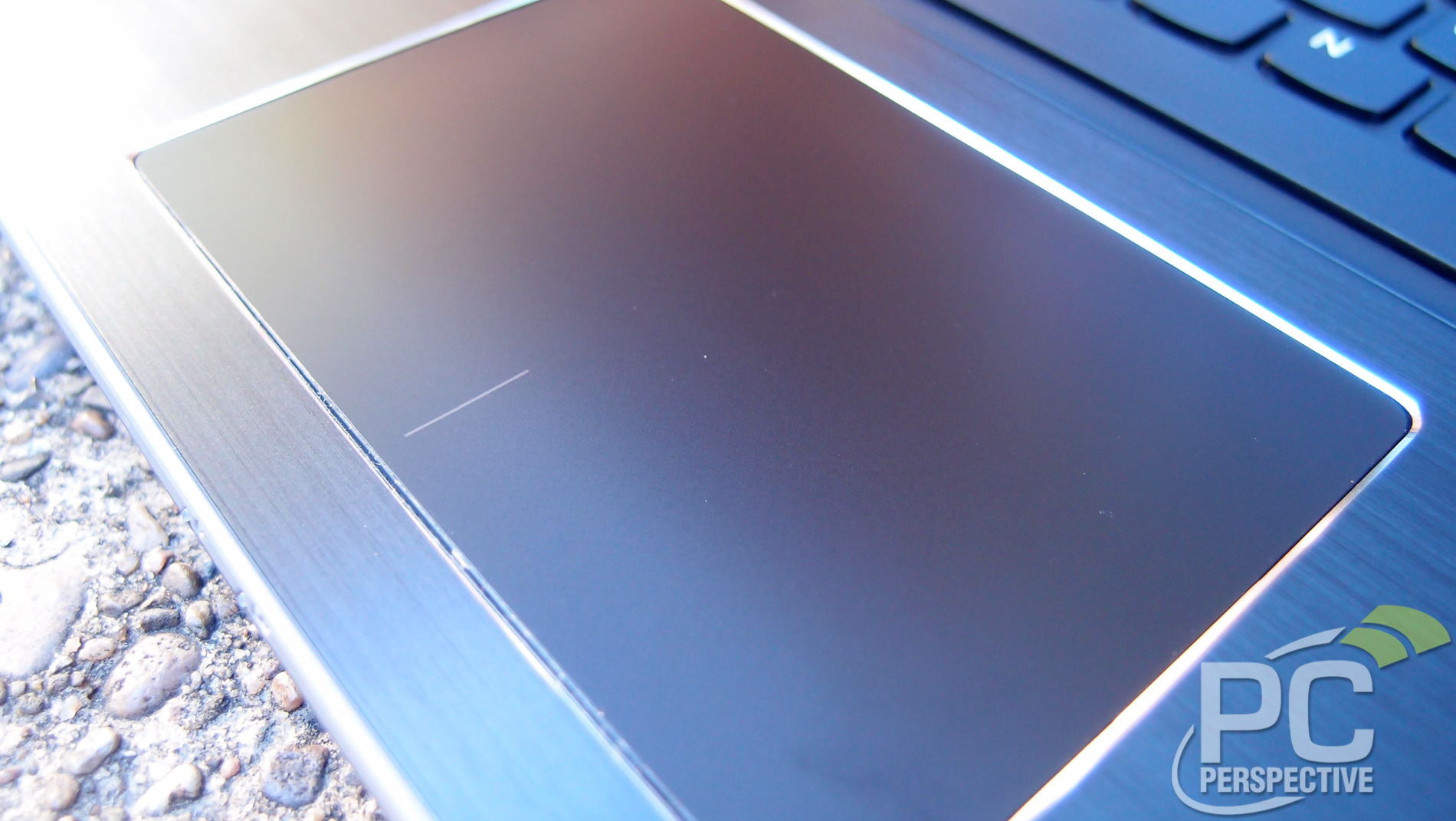 Accompanying the unremarkable keyboard is a slightly better touchpad, which—despite its Synaptics roots—feels rather rickety and cheap in operation. The pad flexed and clicked subtly during normal use in our testing, which is a result of the integrated buttons and most likely a consequence of the front of the pad being slightly elevated versus the rear (to make it easier to use the buttons). As with many clickpads, button presses sometimes evoke inadvertent jumps in the pointer position—a phenomenon which is unfortunately not correctable via the bevy of included driver settings. Apart from that, pointer accuracy and gesture interpretation are good, with such features as two-finger scrolling working as effortlessly as ever. The surface of the pad is smooth with a slightly soft-touch feel. 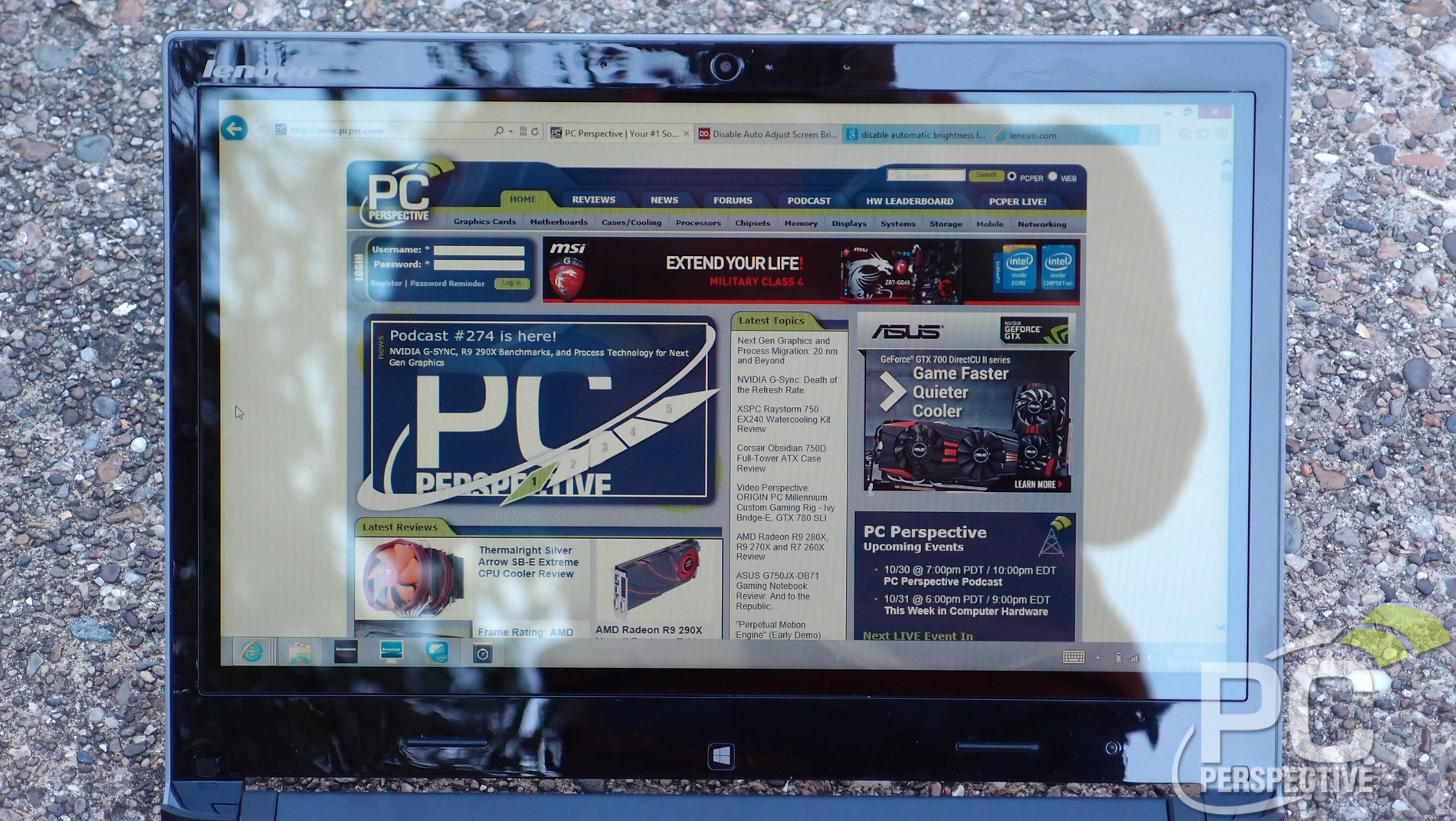 Although it’s missing the Corning Gorilla Glass that protects the Yoga’s display, the Flex 14’s 10-point plastic-lined touchscreen seems every bit as accurate and responsive. Gestures are flawlessly interpreted as well; it’s a pleasure to control the notebook using it. We encountered no problems. 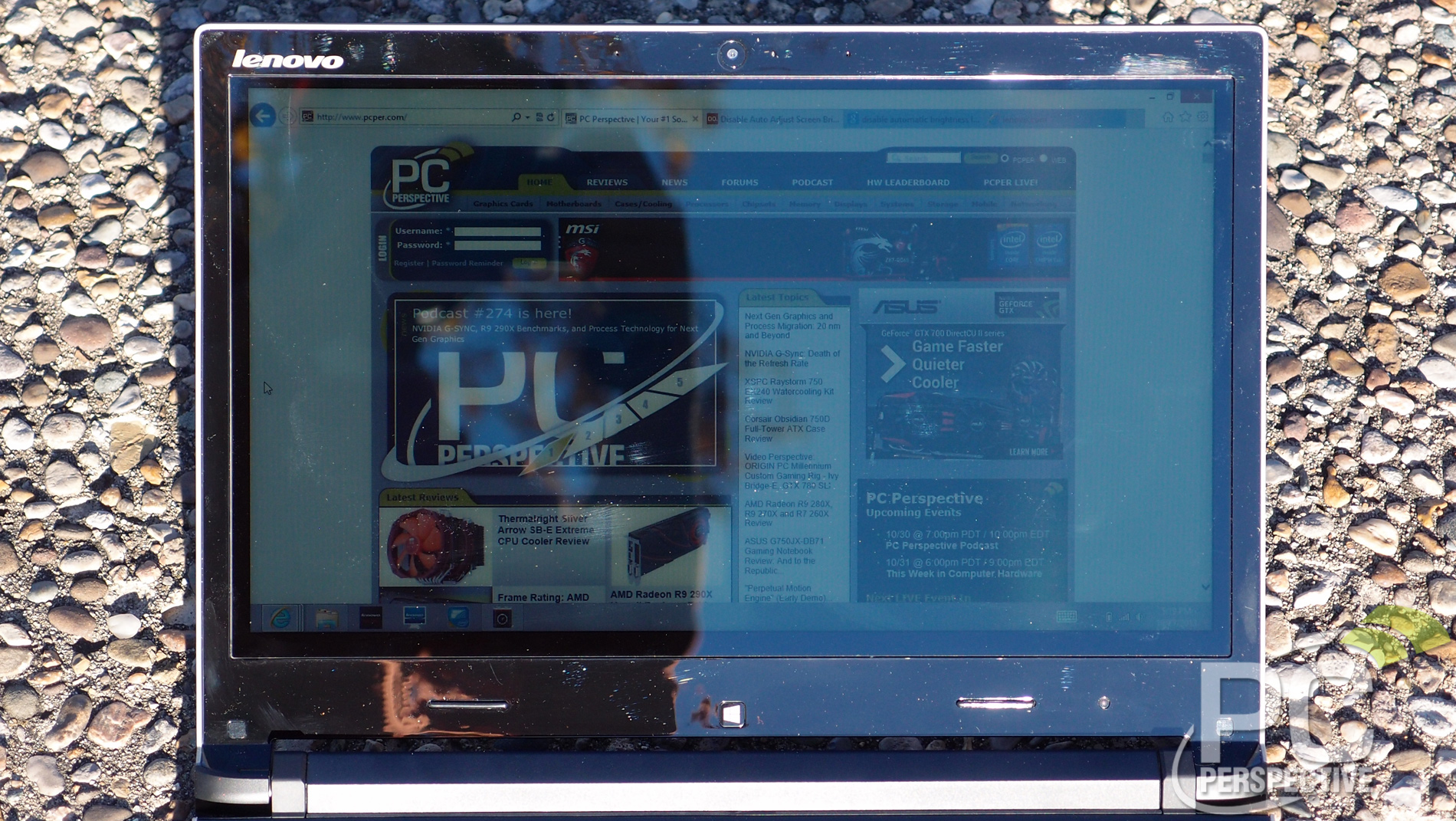 The IdeaPad Flex 14’s 14-inch glossy TN LED display is pretty poor. It features middling brightness, unremarkable contrast, and restrictive viewing angles. Colors appear washed-out with an overly cool color tint immediately noticeable. Outdoor use is severely constrained by the obstructive reflections which quickly set in even while operating in shaded areas. For an indoor office PC it works just fine, but for much of anything else, it’s a disappointment.

Unfortunately, the same goes for the integrated speakers (bottom-mounted, down-firing), which manage a reasonable level of volume, but sound hollow and devoid of any low-frequency capability. Again, the Flex 14 simply isn’t an entertainment notebook. 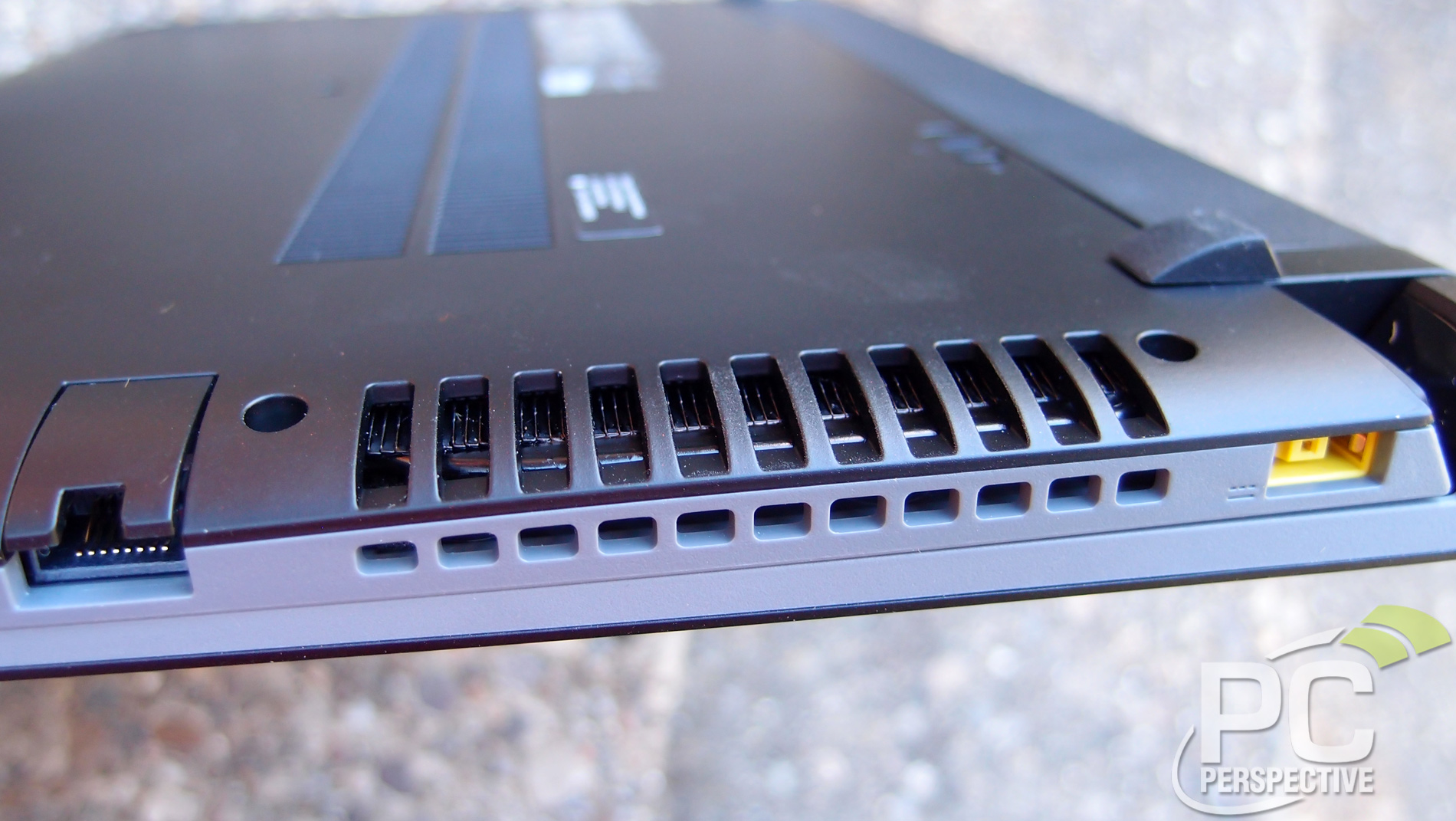 On a brighter note, we were mostly pleased with the Flex 14’s noise levels and temperatures. For starters, the notebook is pretty close to silent when idle, though once you begin taxing it a bit it does become slightly audible.

The effect of these rather tolerable noise levels on temperatures was surprisingly reasonable. During full system stress, the notebook maxed out at around 70°C, which is warm, but hardly concerning. On the other hand, the effects of this on the notebook’s external casing were more pronounced not because of uncomfortable temperature levels, but rather a pretty extreme difference in heat levels between the left and right sides of the base unit. The left side (which is where the fan and all of the components are located) is where nearly all of the heat collects, whereas the right side remains cool almost invariably. 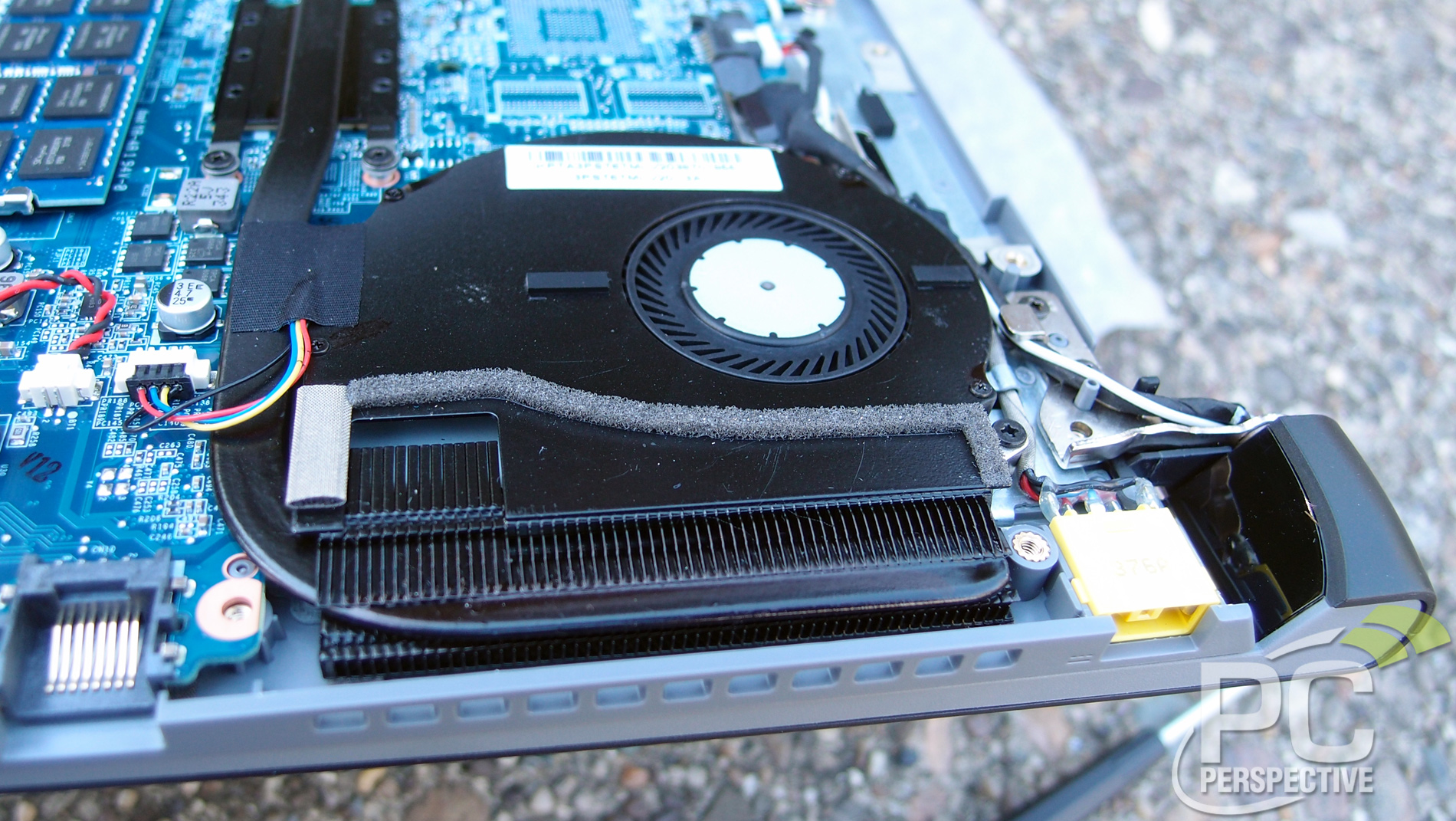 A quick peek at performance level and clock rates under load reveals the primary reason for the synergy of modest temperatures and noise levels: the system quickly throttles under heavy stress. It’s not a terrible issue (especially considering that it’s only really a problem when some degree of GPU stress is present), but it’s still worth mentioning. During CPU stress, we experienced no throttling, and the system maintained its full Turbo Boost frequency of 2.3 GHz (both cores) consistently. When GPU stress was applied, however, the notebook began by wavering between 750 and 1000 MHz before eventually bottoming out in the 700 to 750 MHz range. Add in 100% CPU stress along with the GPU stress, and predictably, things become even more dubious with a maximum GPU clock rate in the 600 to 650 MHz range and the CPU throttling to just 800 MHz.

One last note that’s worth emphasizing: although it’s unlikely you will encounter the situation often in real-world use, the Flex 14’s performance while on battery life is a slight bit lower than while operating on AC power. We recorded 3DMark scores of 29685/3344/530 (Ice Storm/Cloud Gate/Fire Strike) versus 31295/3832/496 on AC power. You might have noticed that the Fire Strike score actually rose; that’s probably the case due to the aforementioned throttling we noted earlier. By the time the final test was reached on AC power, the system had most likely generated enough heat such that it was throttling further than it was on battery (where the performance was slightly more regulated to begin with).

Always of paramount interest in today’s mobile computing world is how long you can remain unplugged on a single charge. While the Yoga 11’s ARM chipset rocked the battery life tests with over 10 hours of longevity under normal usage, the Yoga 11S (which, to be fair, is a fully-functional Windows-based machine as compared to the Yoga 11’s incapable Windows RT platform) turned in a much more ordinary 4 hours and 46 minutes. We were particularly curious to see how the IdeaPad Flex 14 would fare, sporting a Haswell chipset (versus the Yoga 11S’ Ivy Bridge-based CPU) and the slightly larger 48 Wh battery.

First up, under 70% brightness, the Balanced power profile, and the Battery Eater Reader’s Test, the Flex 14 managed 8:57, which isn’t bad—though this result is really only of referential interest. In comparison, the Yoga 11S lasted for two full hours less (6:57). 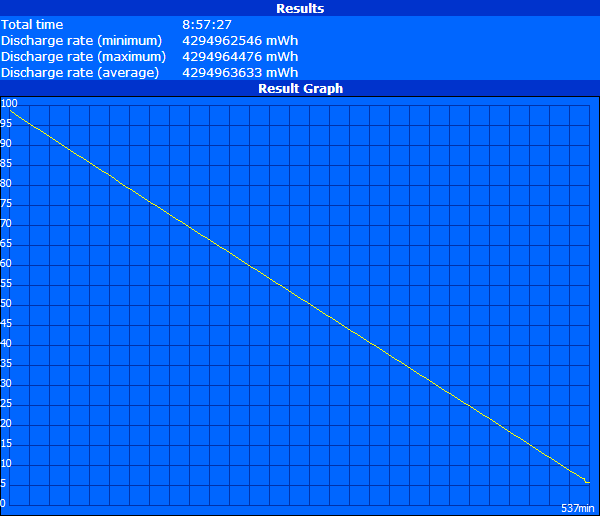 More relevant are our results of this next test, where we maintain the same settings as before, except with regular web browsing layered on top. Here, the Flex 14 easily bests the Yoga 11S’ 4:46 with a result of 7:03—as good as many much higher-priced modern Ultrabooks, and at least within reach of the Yoga 11’s 10:04. 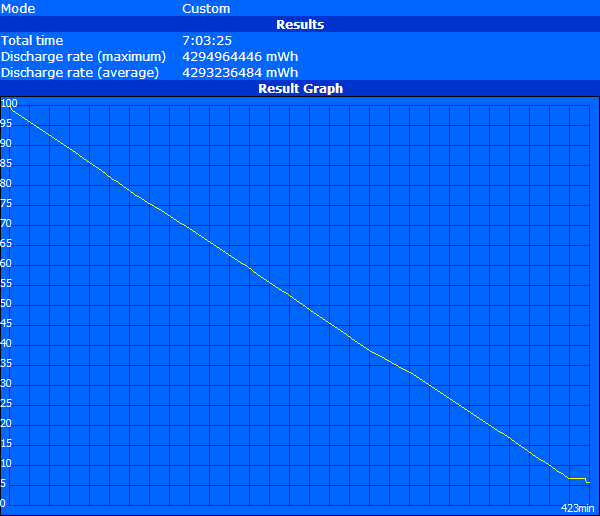 Finally, under maximum load, the Flex 14 gave out just after the 2 hour mark, which is about average for notebooks of this class. 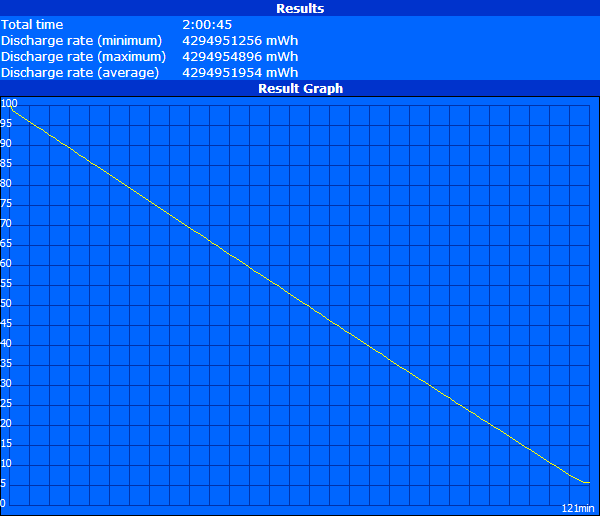 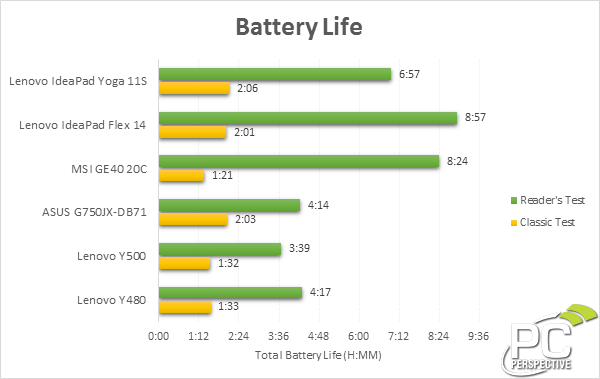 There’s hardly any space to work with from the outset on the Flex 14—mostly thanks to the restrictive 128 GB capacity of the SSD, but also because of the partitioning approach (which includes a separate LENOVO partition for OneKey Recovery and other functionality). Hypothetically you could simply repartition this right off the bat to resolve the issue if you don’t care about these features. The system (C:) partition is actually just a total of 77.6 GB large at the start, with a secondary (D:) partition of 24.9 GB alongside it.

It also doesn’t help that there’s a fair amount of bloat preinstalled, from McAfee security and Nitro Pro (trial PDF reader) to Windows 8 apps for AccuWeather, Kindle, Lenovo Cloud Storage (SugarSync), Rara Music, FilmOn Television, Evernote, Skype, and more. A few of these apps are quite large (like McAfee and Nitro), and although uninstalling them isn’t too much trouble, there are quite a few of them.

In terms of warranty, the IdeaPad Flex 14 comes with a standard 1-year depot warranty. As with all Lenovo notebooks, a range of upgraded warranties are available at the time of purchase, with such options as in-home service and Accidental Damage Protection. 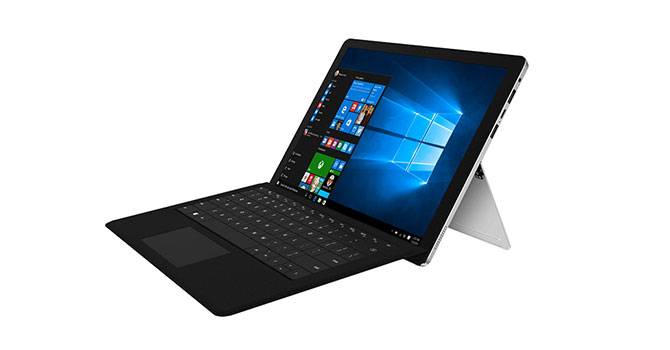 Chuwi made a lot of friends, see if the SurBook 2 might convince you to count yourself among them 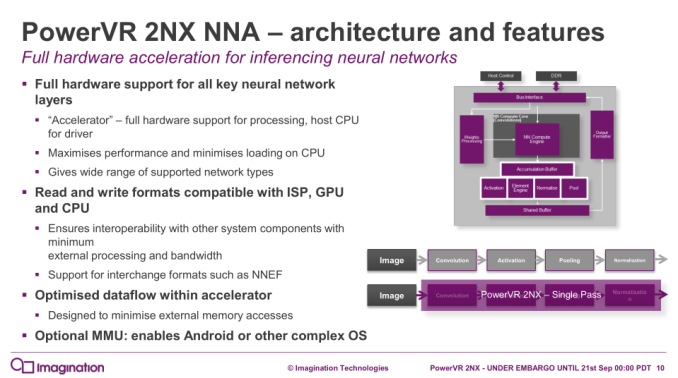