The custom built R9 290X cards are starting to come in and up next is the Sapphire Tri-X model.

It was mid-December when the very first custom cooled AMD Radeon R9 290X card hit our offices in the form of the ASUS R9 290X DirectCU II.  It was cooler, quieter, and faster than the reference model; this is a combination that is hard to pass up (if you could buy it yet).  More and more of these custom models, both in the R9 290 and R9 290X flavor, are filtering their way into PC Perspective. Next on the chopping block is the Sapphire Tri-X model of the R9 290X.

Sapphire's triple fan cooler already made quite an impression on me when we tested a version of it on the R9 280X retail round up from October.  It kept the GPU cool but it was also the loudest of the retail cards tested at the time.  For the R9 290X model, Sapphire has made some tweaks to the fan speeds and the design of the cooler which makes it a better overall solution as you will soon see. 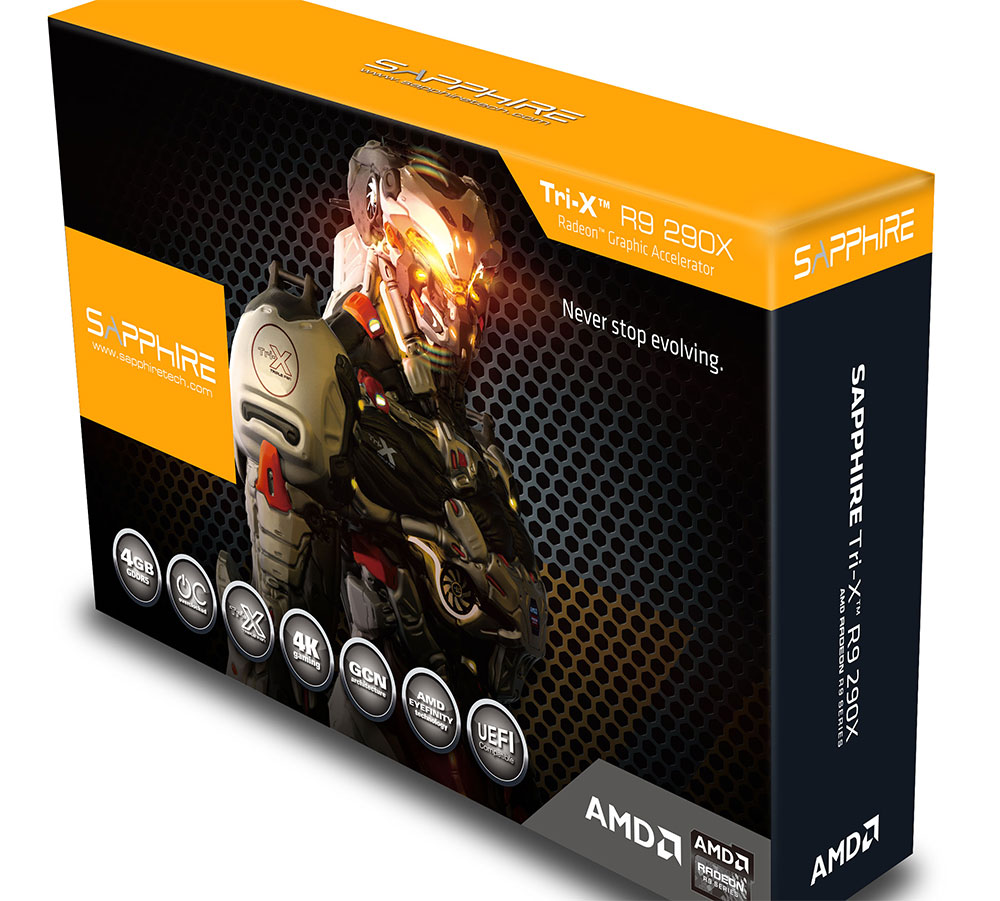 The key tenets for any AMD R9 290/290X custom cooled card is to beat AMD's reference cooler in performance, noise, and variable clock rates.  Does Sapphire meet these goals?

While the ASUS DirectCU II card was taller and more menacing than the reference design, the Sapphire Tri-X cooler is longer and appears to be more sleek than the competition thus far.  The bright yellow and black color scheme is both attractive and unique though it does lack the LED light that the 280X showcased.

Sapphire has overclocked this model slightly, to 1040 MHz on the GPU clock, which puts it in good company.

There are three fans on the Tri-X design, as the name would imply, but each are the same size unlike the smaller central fan design of the R9 280X. 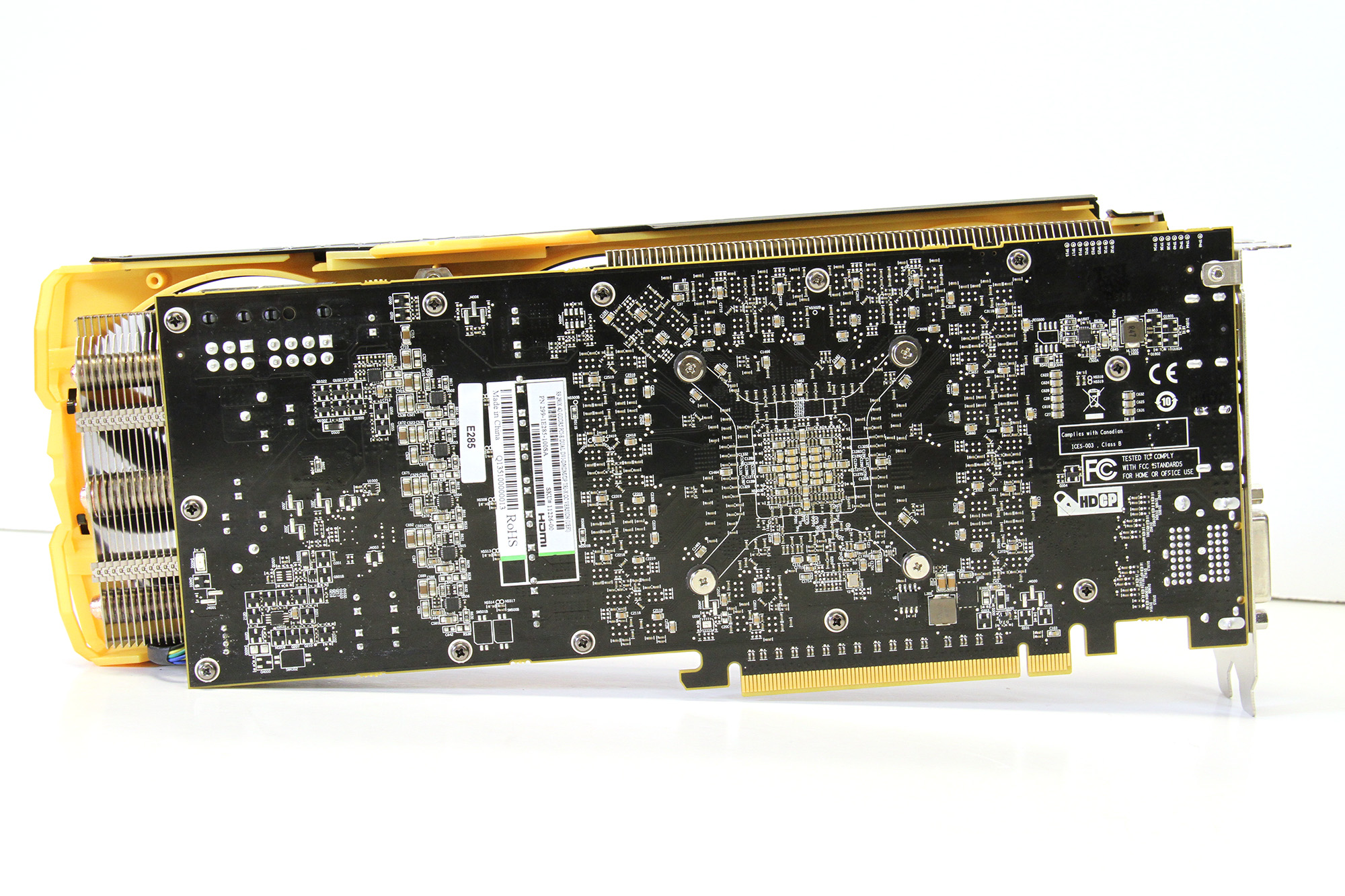 Looking at the back of the card, you can clearly see both the heatsink and the fan shroud extend past the standard PCB.  That is an interesting note to make as well: as far as I can tell the Sapphire Tri-X card is using the exact same PCB design as the reference AMD R9 290X cards we have in-house.  Rather than have some engineers work on a custom design, Sapphire seems to be content with swapping the cooler and changing some firmware.

The Tri-X is a very heavy graphics card thanks to the large heatsink that Sapphire has integrated in the design.  Here you can see the fins and heatpipes that whisk the heat away from the GPU to be cooled by the air movement of the three included fans. 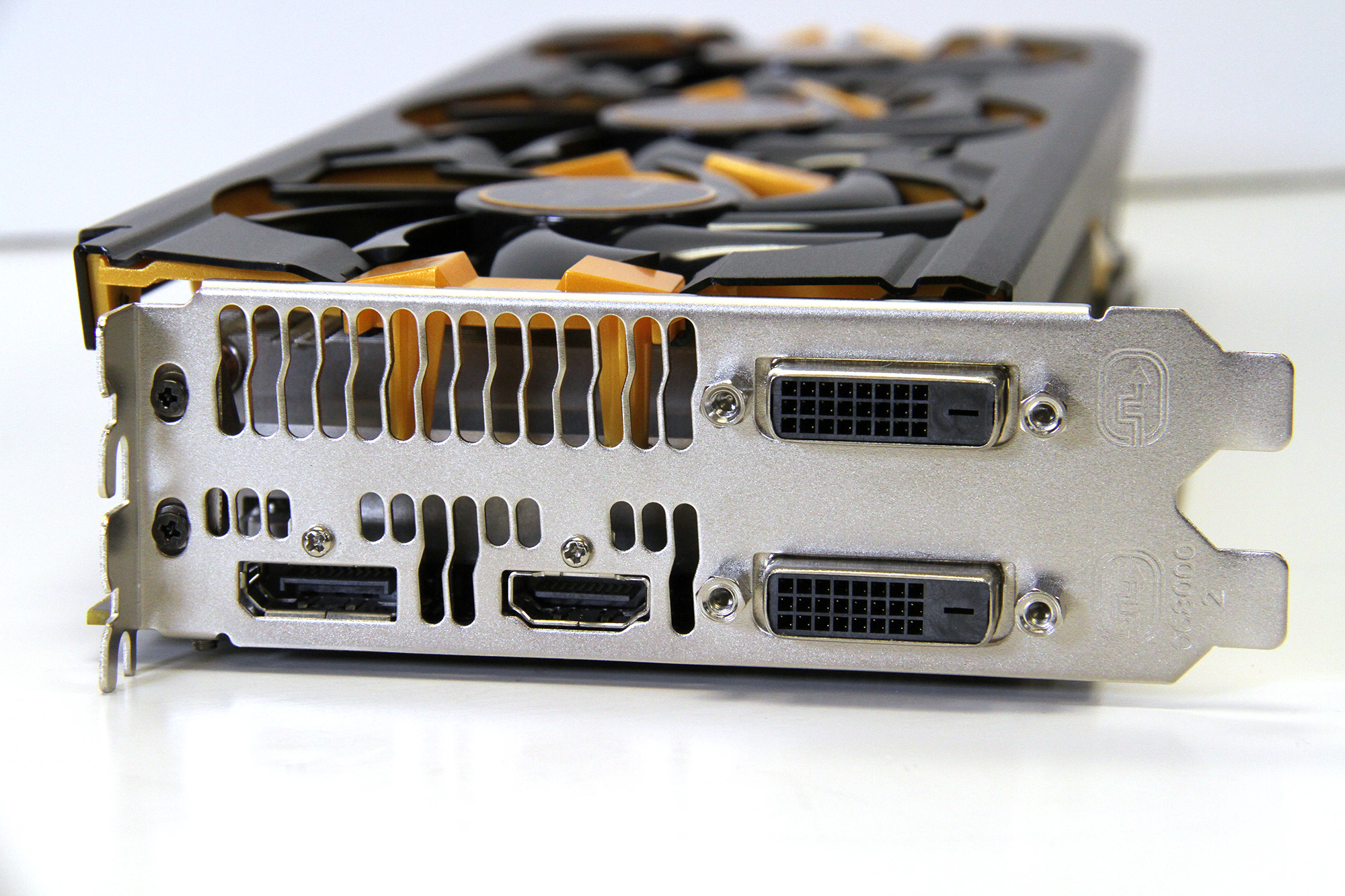 External display connectivity also remains unchanged with support for a pair of dual-link DVI connections, a full-size HDMI port and a full-size DisplayPort. 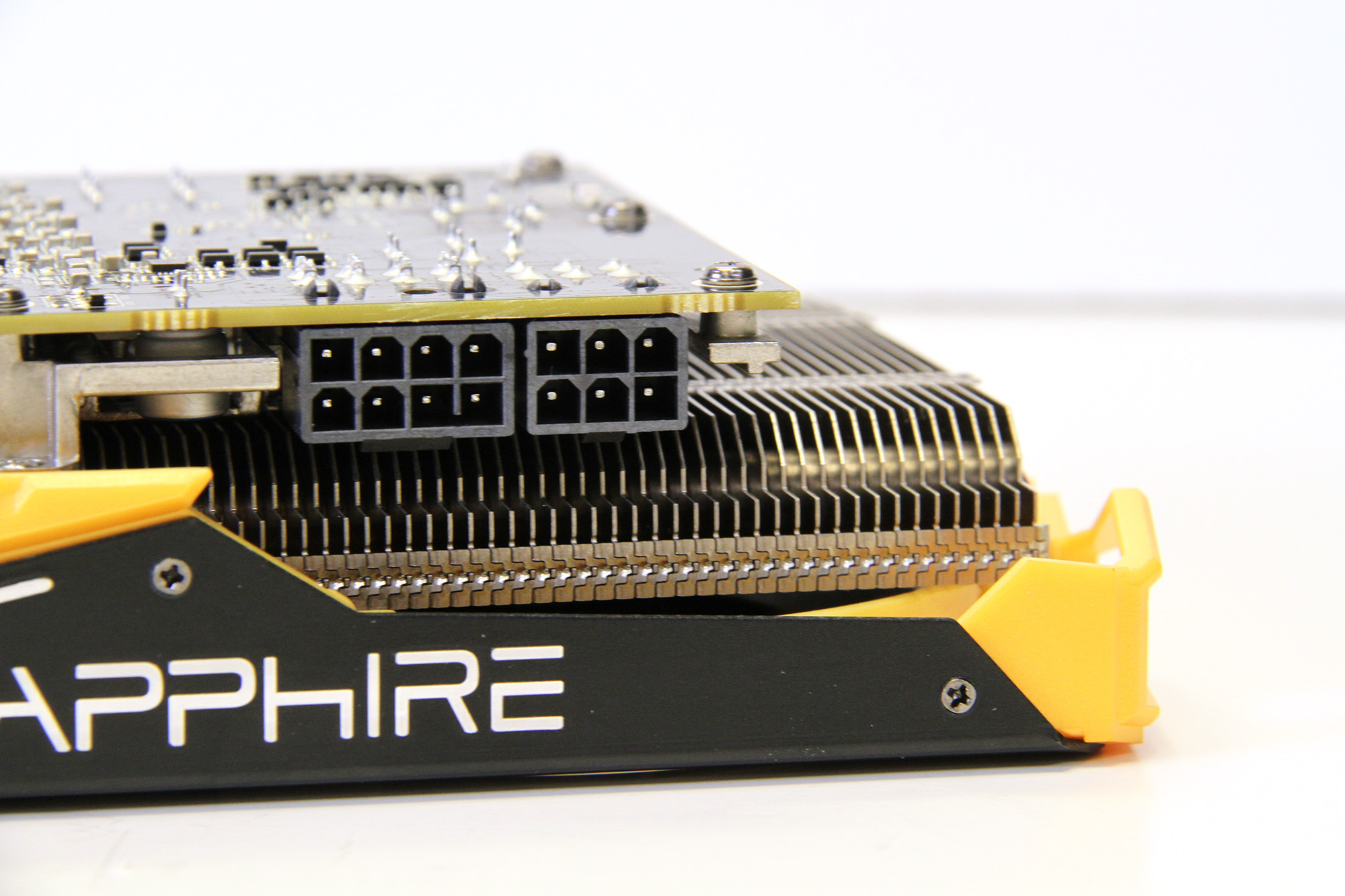 The Sapphire Tri-X 290X still only requires a 6-pin and an 8-pin power connection.  This angle might make it look like the connections are hard to remove after having been installed, but there is more than enough room for your fingers. 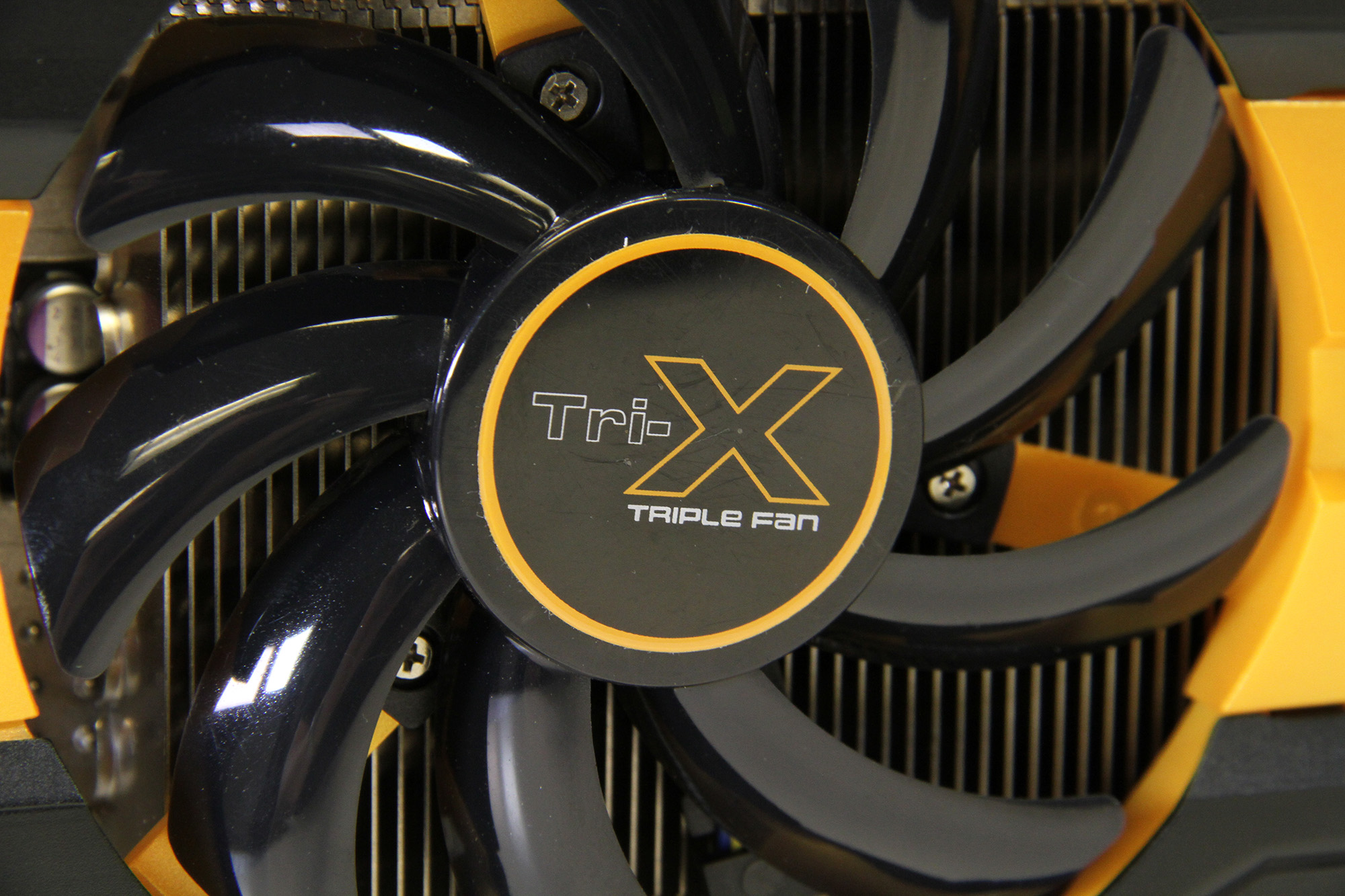 The fans Sapphire has included on the Tri-X are surprisingly efficient and quiet (as you will see in our testing on the following pages).  The Sapphire model was more than capable of keeping up with the ASUS DirectCU II in our testing. 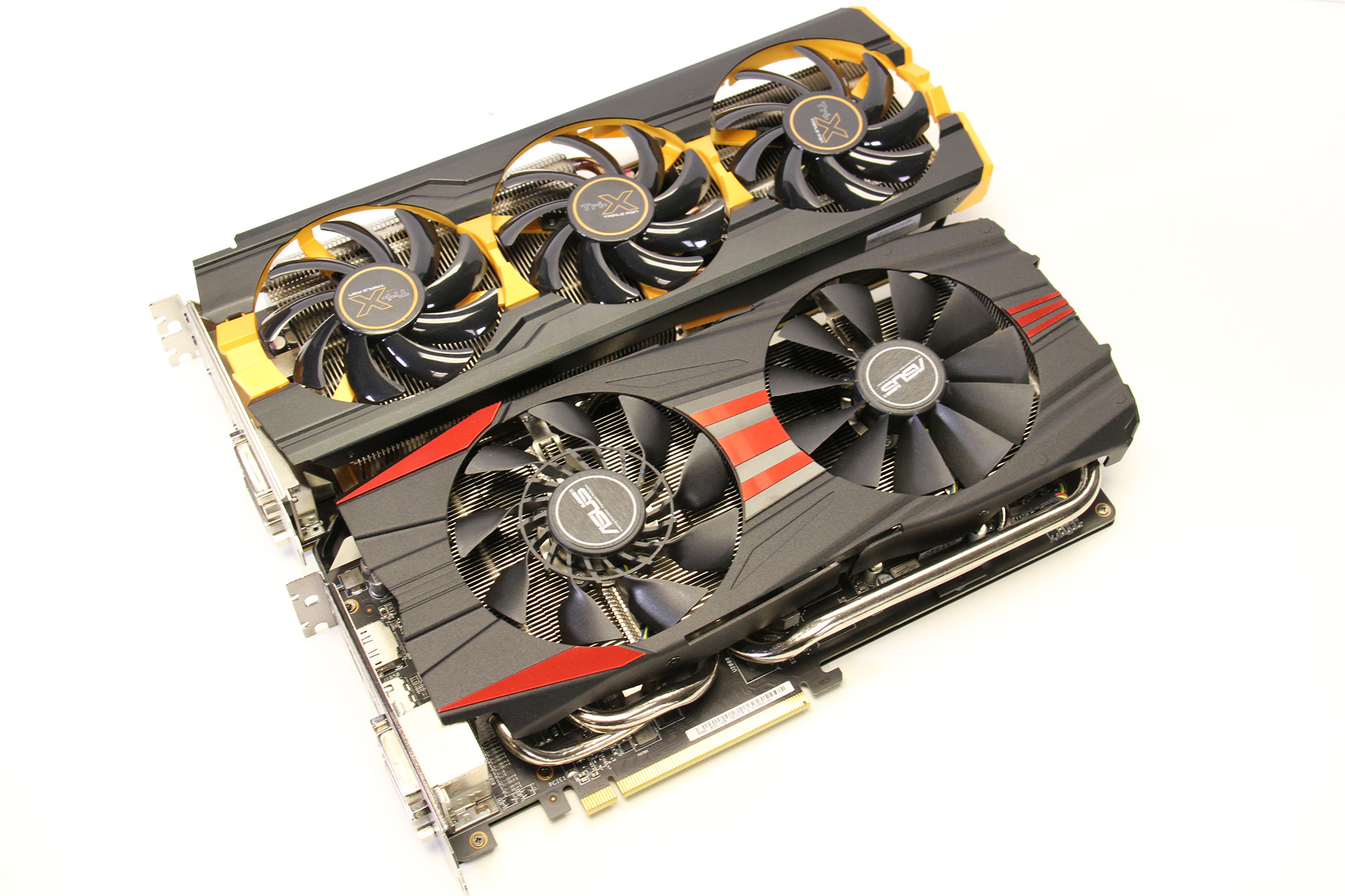 This side by side comparison shows the difference in the size between the Sapphire and the ASUS custom R9 290X models.  No girth jokes, okay?