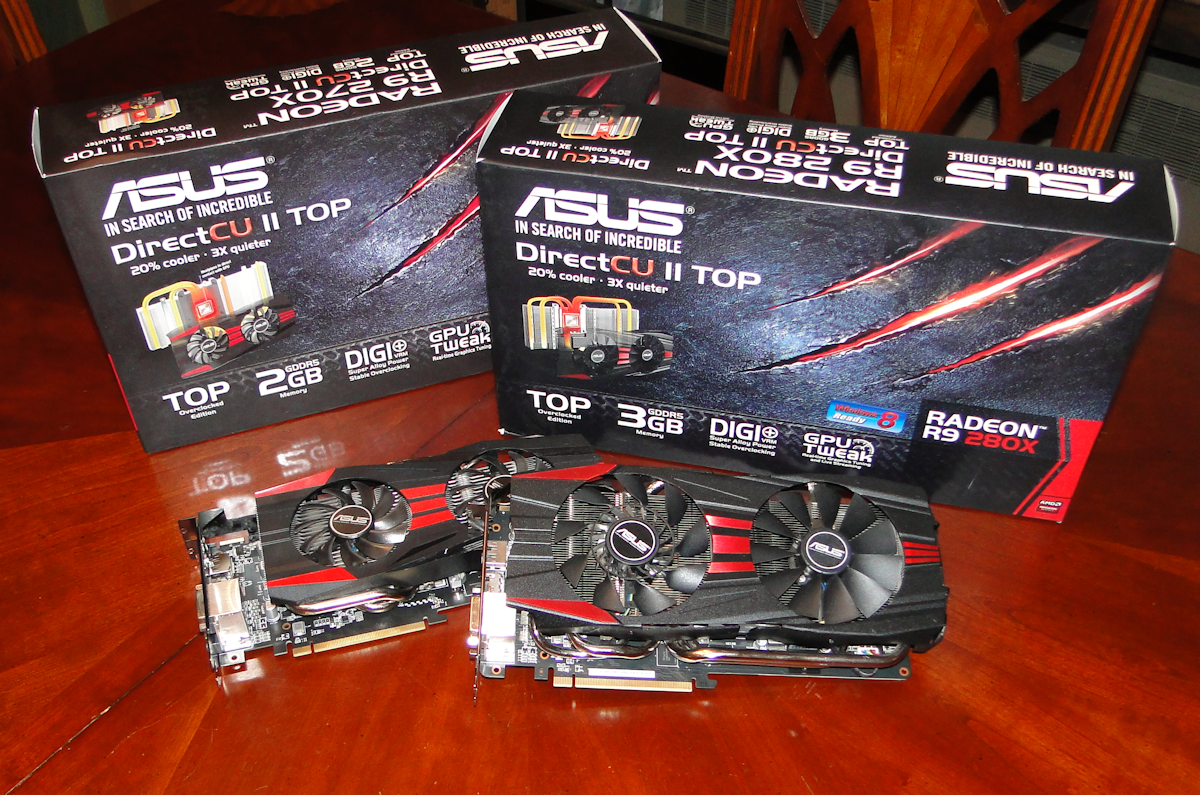 First off let me say that visually I really like what Asus has done with their cooling solutions.  Looks are not everything, but the upgrade from the previous DCII units is pretty striking.  The old coolers were a little clunky and boxy looking while these new ones are much more organic looking.  I hate to say “sexy”, but they are a big improvement.  This of course is not the only upgrade the R9 270X gets from Asus.

The base clock of the stock unit is 1000 MHz with a boost up to 1050 MHz.  Asus overclocks this by a decent amount by going to a single clockspeed of 1120 MHz (no boost).  The memory stays at the same 5.6 GHz as the reference design.  On the 256 bit bus this gives a total bandwidth of 179 GB/sec.  Memory size is also at 2 GB, which should be more than enough for most current applications.  It is still comprised of 1280 stream units, 80 texture units, and 32 ROPs.  This product does not include TrueAudio support as it is based on the older Pitcairn design. 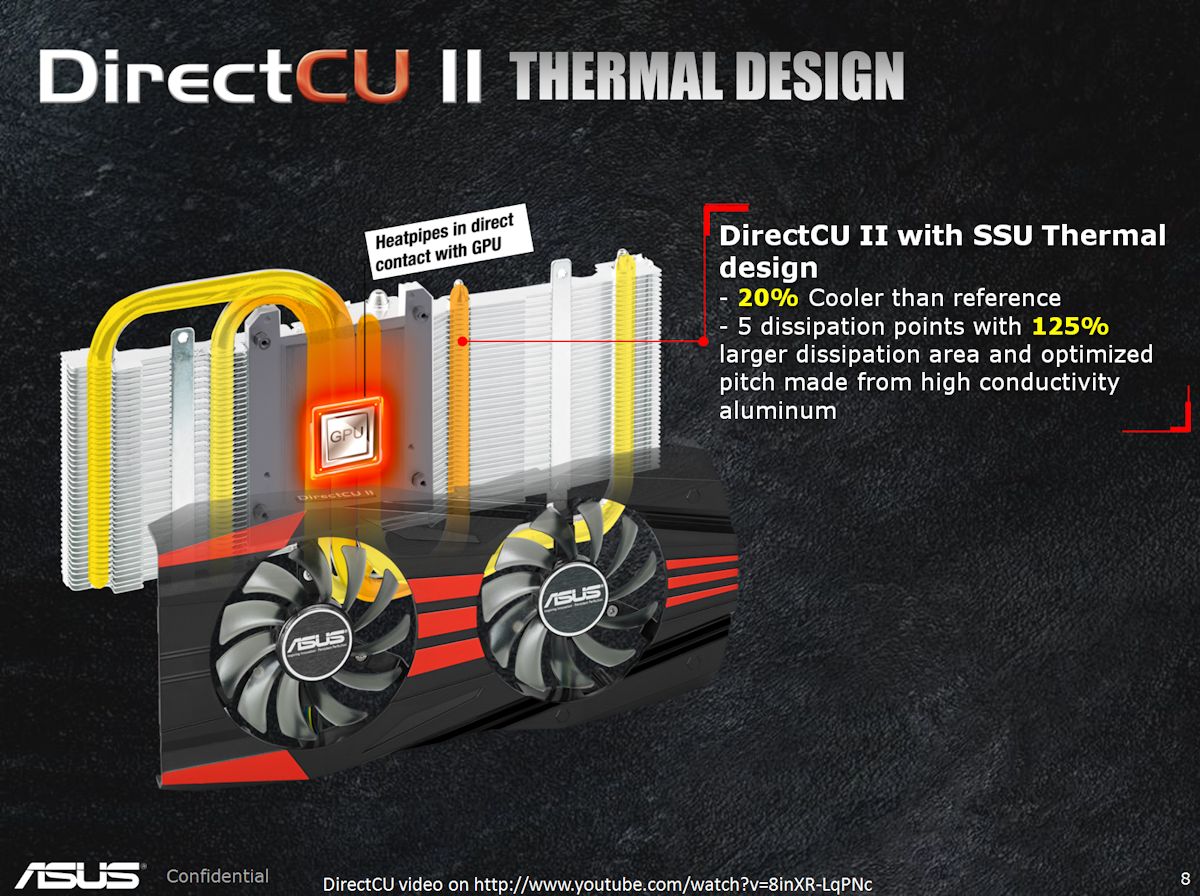 Asus upgrades the board design by giving it an extra power phase for the GPU.  It has 6 instead of the standard 5 on the reference design, but it leaves the memory with the same 2 phases as the reference.  For the price of this card, it is a nice option to have for overclocking purposes.  The board still comes with the two 6-pin PCI-E power connections, which should allow upwards of 225 watts of power to be delivered to the board.

AMD finally upgraded their output options to include two dual-link DVI connections as well as full sized HDMI and DisplayPort connections.  All four outputs can be used at once and the DP can be attached to an external DP-MST unit to push upwards of 5 panels at once.  The last generation of cards would have mixed and matched output options, and invariably one of the DVI ports was single-link.  I for one am happy about this particular upgrade. 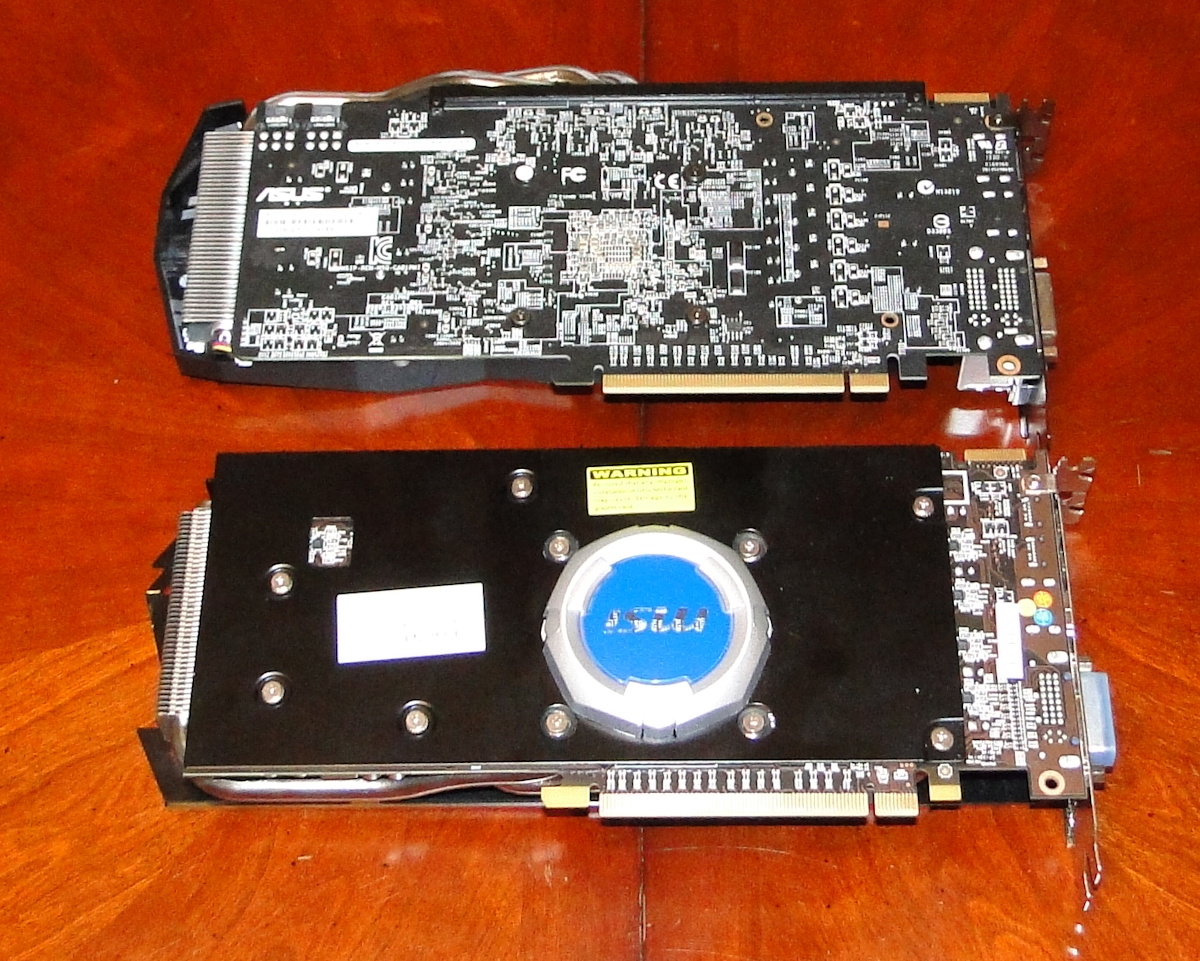 We can see the extreme differences between the MSI HAWK version of this chip and the DCII from Asus.

The cooling is again the centerpiece of this product.  The dual slot, dual fan cooler which features three heatpipes; two of which wrap all the way from the top to the bottom.  This gives the impression of five heatpipes in total, but when looking at the GPU area we see that there are in fact only three that touch the core.  The fans are 60 mm units, but are pretty basic as compared to the new CoolTech fan units featured in the higher end cards.

Overall this is a pretty impressive looking part for the $199 market.  Asus did add a lot of value to this design.  The card features a single CrossFire connection, so it cannot be used in Tri and Quad-Fire configurations.  There are still limitations with AMD’s CrossFire technology when it comes to Eyefinity frame pacing, but supposedly this next month we will see beta drivers which address this limitation.  Since it is again based on Pitcairn silicon, it does not feature the DMI based CrossFire functionality that the new R9 290 series does.  One nice thing is that this card can be CrossFire’d with the older HD series of products.  In my testing I was able to enable CrossFire with a MSI HD 7870 HAWK.