The professional line of products from Lenovo includes: a 28-inch 4K display, another 28-inch 4K display which moonlights as an Android tablet, a proper tablet powered by Bay Trail, and a laptop which might crack a smile from fans of the Optimus keyboard. If any of these devices gets your attention then you might be glad to know that each of them is under $1300 base price.

First up is the ThinkVision Pro2840m 4K Display which is a professional-grade 28-inch 3840×2160 monitor for $799. The image gets me excited for the thin bezel although a separate press deck (seen below) shows a visibly different monitor, with the same model number, having a more-standard border. Cross your fingers and hope that it looks more like the above image than the one below. I find it doubtful, however, but I digress either way. 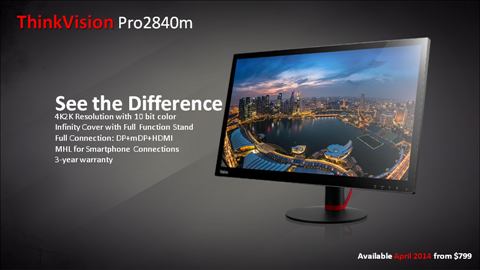 … it is probably a significantly larger bezel.

Lenovo does not mention the panel type but they advertise a 5ms response time and a 1000:1 contrast ratio. It has a 10bit color depth and a 72% color gamut which I am hoping refers to Adobe RGB which puts it roughly on par with my Wacom Cintiq 22HD. It could be 72% sRGB coverage, though, which would be problematic (especially for a professional panel).

Note that contrast ratio claims are messed with constantly. Most of these million-to-one claims are measured at separate times and often in separate environments. There have been tales of "black measurements" being taken in laboratory-controlled dark rooms with the panels off and white values recorded directly against the backlight. Static contrast ratios, measured with a black and white checkerboard pattern, are often not too far away from 1000:1. Plasma and OLED panels can get significantly better, however. 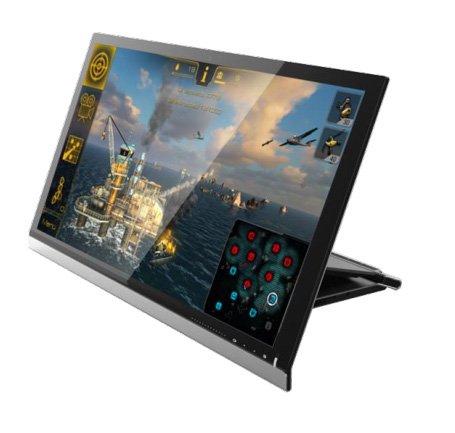 Lenovo carefully wrote Latest Nvidia Tegra processor and ThinkVision 28 is expected to launch in July. This would be a year after the Tegra 4 launch and right around the rumored launch window of Logan (Q2 2014). This could be a launch-window release for the next Tegra. If so, this would be Android powered by Kepler.

On the topic of tablets: the ThinkPad 8. Lenovo's idea of an 8.3-inch 1080p business tablet is one powered by Bay Trail for x86 support backed by up to 8 GB of RAM. Because it support x86, it is preloaded with Windows 8.1 and Microsoft Office. You can choose between 32, 64, and 128 GB of SSD storage and then later insert a MicroSD card for more storage. Prices are expected to start at $399. 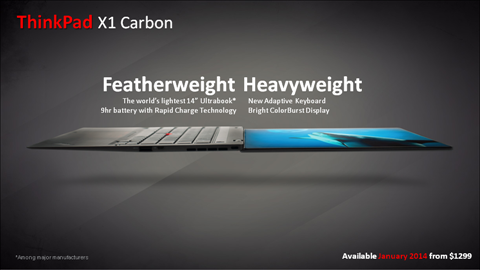 Lastly: The ThinkPad X1 Carbon. This 14-inch Ultrabook has voice and gesture control along with a programmable touch strip. The touch strip is quite interesting: it is a long, narrow, and apparently flexible LCD touchscreen. As programs open and close, its hotkeys will change accordingly. They do not say whether the user can control these or whether they are using baked profiles but, regardless, it is an interesting step.

The laptop itself has up to 8 GB of RAM, up to 512 GB of SSD storage, Haswell-based processors, and up to a 2560×1440 IPS display. Only Wireless-N is possible but it also integrates NFC for some reason. The battery allows for 8 hours on a single charge and, in under an hour of being plugged in, it is full again. Its GPU is the built-in GT3 which is Intel HD 5000 graphics. Prices start at $1299 (although one slide says $1199).