ARM is an interesting little company.  Years ago people would have no idea who you are talking about, but now there is a much greater appreciation for the company.  Their PR group is really starting to get the hang of getting their name out.  One thing that ARM does that is significantly different from what other companies do is announce products far in advance of when they will actually be seeing the light of day.  Today they are announcing the Cortex-A17 IP that will ship in 2015. 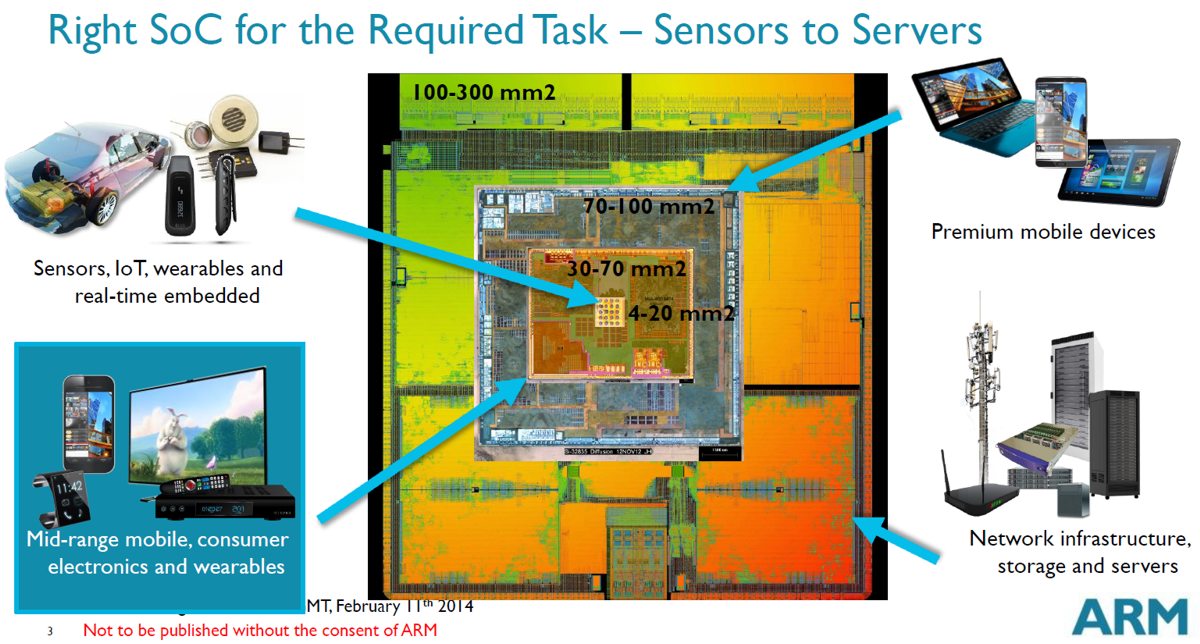 ARM really does not have much of a choice in how they announce their technology, primarily because they rely on 3rd parties to actually ship products.  ARM licenses their IP to guys like Samsung, Qualcomm, Ti, NVIDIA, etc. and then wait for them to actually build and ship product.  I guess part of pre-announcing these bits of IP provides a greater push for their partners to actually license that specific IP due to end users and handset makers showing interest?  Whatever the case, it is interesting to see where ARM is heading with their technology.
The Cortex-A17 can be viewed as a more supercharged version of the Cortex-A12, but with features missing from that particular product.  The big advancement over the A12 is that the A17 can be utilized in a big.LITTLE configuration with Cortex-A7 IP.  The A17 is more power optimized as well so it can go into a sleep state faster than the A12, and it also features more memory controller tweaks to improve performance while again lowering power consumption. 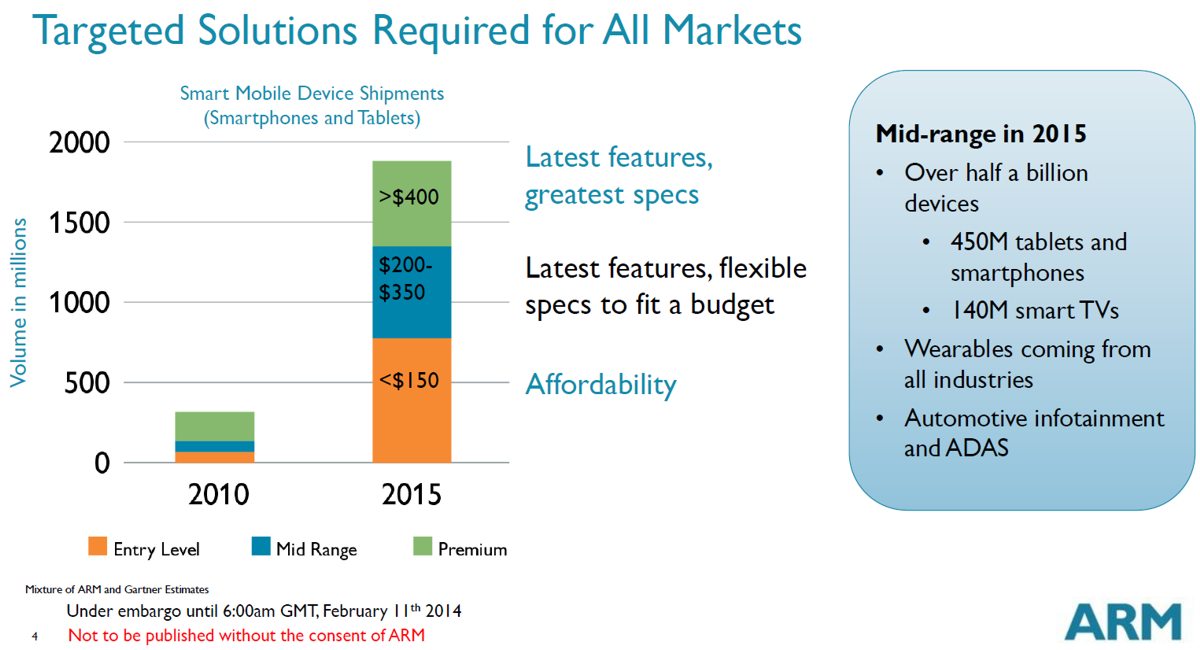 In terms of overall performance it gets a pretty big boost as compared to the very latest Cortex-A9r4 designs (such as the Tegra 4i).  Numbers bandied about by ARM show that the A17 is around 60% faster than the A9, and around 40% faster than the A12.  These numbers may or may not jive with real-world experience due to differences in handset and tablet designs, but theoretically speaking they look to be in the ballpark.  The A17 should be close in overall performance to A15 based SOCs.  A15s are shipping now, but they are not as power efficient as what ARM is promising with the A17.
Continue reading our overview of the new ARM Cortex-A17 processor announcement!!
The Cortex-A17 is still based on the ARMv7-A ISA.  It is still limited to 32 bit operations as compared to the 64 bit in ARMv8-A devices like the upcoming A53 and A57 parts.  This is not a showstopper for ARM as the 32 bit ecosystem for mobiles will thrive for many years to come.  ARM estimates there are 1 million applications that support ARMv7-A currently, and development of 64 bit applications has really only just begun.  This has no impact on future compatibility due to ARMv8-A supporting the ARMv7-A instruction set.  All of these applications will be portable to new 64 bit ARM processors.  This is in evidence with Apple's latest A7 SOCs being 64 bit native, but running all 32 bit applications available for iOS. 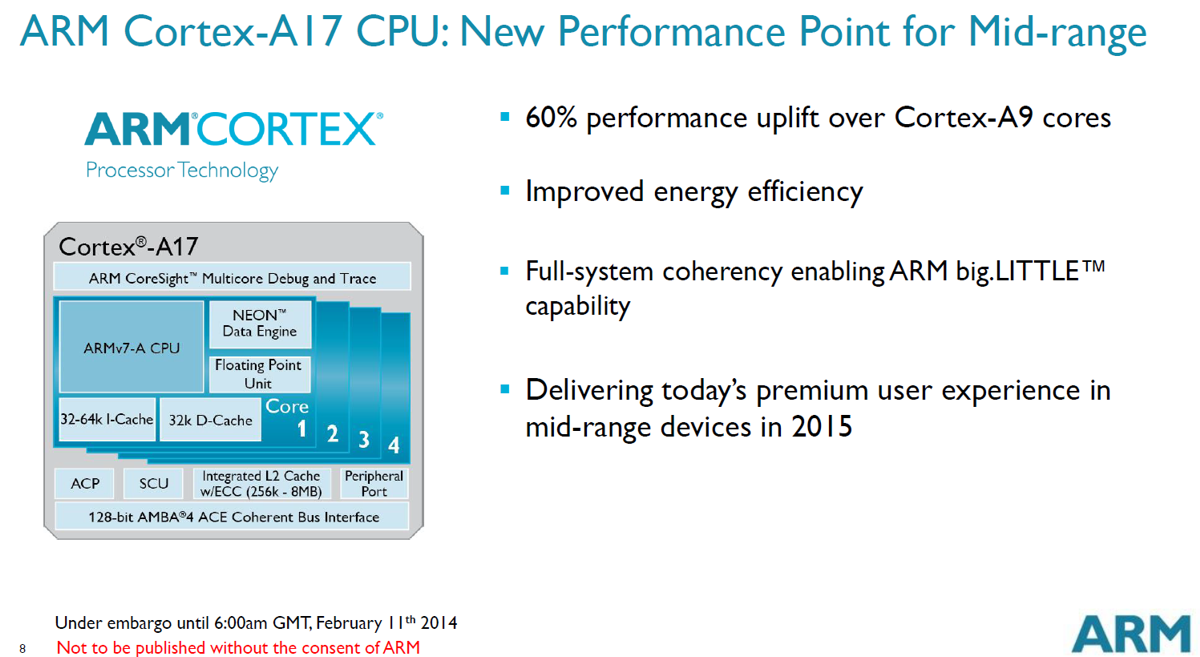 The primary push for this product seems to be more about energy efficiency than new features.  It should offer very comparable performance to the latest A15 products, but at a 40% power reduction.  This allows the A15 to be used in applications which require more performance, but do not have the power envelope to utilize that particular design.  It will also of course enable comparable performance to the A9/A12 parts, but again with lower power consumption.
The A17 can be bundled easily with the Mali-T720 graphics unit (new Mali part supporting DX11/OpenGL ES 3.0).  ARM also offers the Mali-V500 VPU (low power video playback unit) as well as the Mali-DP500 DPU (display unit for sending that pixel data to the screen).  These will probably see a lot of bundling with the A17 overall, as the technology has been worked out by ARM.  The A17 is also initially aimed at TSMC's 28HPM and GLOBALFOUNDRIES 28SLP processes.  Using ARM's POP (Processor Optimization Pack), a program to accelerate time to market of these products for 3rd party manufacturers, we should see these products in a production ready state relatively quickly as compared to creating a design from scratch just using the base IP. 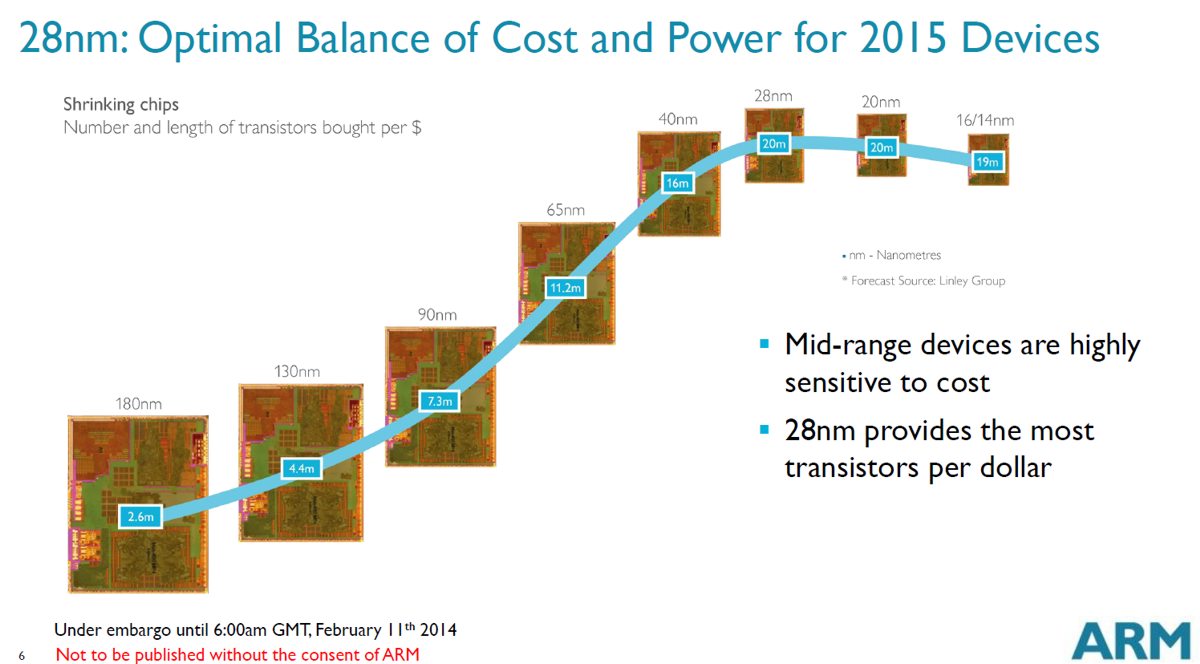 One of the more interesting topics of discussion is with process technology and where the Cortex-A15 will fall.  Currently the king of cost per transistor is the 28 nm node.  Different flavors of 28 nm have been in full scale production for well over two years, and it is a very mature and stable platform to develop chips for.  Pureplay foundries are only now just releasing the 22/20 nm process nodes for mass production, and the cost per transistor is still a little bit higher than what can be had with 28 nm.  Certainly the idea of greater transistor density will appeal to some manufacturers in certain applications, but the ARM designs are typically very small from the outset.  For most mobile, embedded, and sensor devices the increase in transistor density is not nearly as important as keeping a manageable die size while providing enough space for all the necessary data, power, and ground connections.  The A17 design will likely first be seen on 28 nm when introduced in 2015, but that is not to say that once costs improve for 22/20 nm nodes that we will see the designs ported. 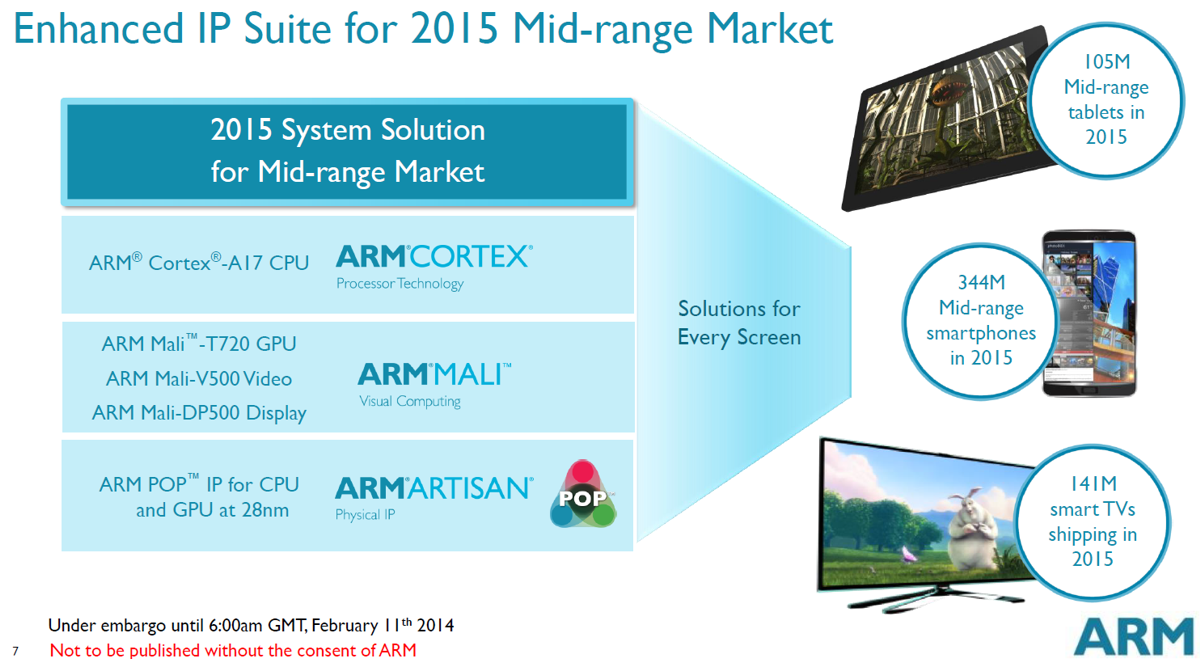 ARM is not standing still and they are developing products that fit a variety of markets.  ARMv7-A is going to be around for years to come and they continue to develop parts that will address that software ecosystem.  The A17 is an evolutionary product that fits a fairly extensive market for handhelds, tablets, and other consumer devices.  It is interesting that they have announced this so early, as we have yet to see Cortex-A12 parts hit the market.  These two products sit in the same spot, so we can expect to see A12 designs supplanted by A17 once 2015 hits.  Progress is inevitable, but the mobile market is growing at a tremendous rate and ARM needs to capitalize on that.  Introducing new and innovative designs will help them keep ahead of the competition when it comes to powering the billions of mobile devices that are expected to sell in the next few years.