Lenovo’s latest update to the popular T4XXs series brings some serious changes with it. Dive in with us!

Arguably some of the most thoughtful machines on the market are Lenovo’s venerable ThinkPads, which—while sporadically brave in their assertions—are still among the most conservative (yet simultaneously practical) notebooks available.  What makes these notebooks so popular in the business crowds is their longstanding refusal to compromise functionality in the interest of form, as well as their self-proclaimed legendary reliability.  And you could argue that such practical conservatism is what defines a good business notebook: a device which embraces the latest technological trends, but only with requisite caution and consideration.

Maybe it’s the shaky PC market, or maybe it’s the sheer onset of sexy technologies such as touch and clickpads, but recent ThinkPads have begun to show some uncommon progressivism, and unapologetically so, too.  First, it was the complete replacement of the traditional critically-acclaimed ThinkPad keyboard with the Chiclet AccuType variety, a decision which irked purists but eventually was accepted by most.  Along with that were the integrated touchpad buttons, which are still lamented by many users.  Those alterations to the winning design were ultimately relatively minor, however, and for the most part, they’ve now been digested by the community.  Now, though, with the T440s (as well as the rest of Lenovo’s revamped ThinkPad lineup), we’re seeing what will perhaps constitute the most controversial change of all: the substitution of the older touchpads with a “5-button trackpad”, as well as optional touchscreen interface.

Can these changes help to keep the T440s on the cusp of technological progress, or has the design finally crossed the threshold into the realm of counterproductivity? 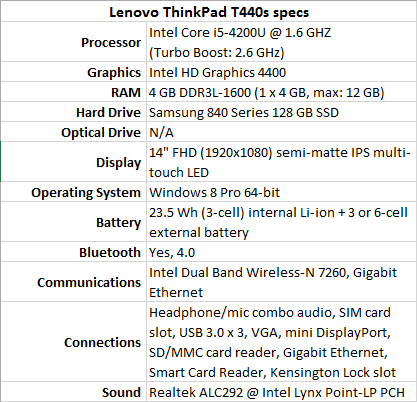 Compared with nearly any other modern notebook, these specs might not hold many surprises.  But judged side-by-side with its T430s predecessor, there are some pretty striking differences.  For starters, the T440s is the first in its line to offer only low-voltage CPU options.  While our test unit shipped with the (certainly capable enough) Core i5-4200U—a dual-core processor with up to 2.6 GHz Turbo Boost clock rate—options range up to a Core i7-4600U (up to 3.30 GHz).  Still, these options are admittedly a far cry from the i7-3520M with which top-end T430s machines were equipped.  Of course, it’s also less than half of the TDP, which is likely why the decision was made.  Other notables are the lack of discrete graphics options (previously users has the choice of either integrated graphics or an NVIDIA NVS 5200M) and the maximum supported memory of 12 GB.  And, of course, there’s the touchscreen—which is not required, but rather, is merely an option.  On the other hand, while we’re on the subject of the screen, this is also the first model in the series to offer a 1080p resolution, whether traditional or touch-enabled—which is very much appreciated indeed. 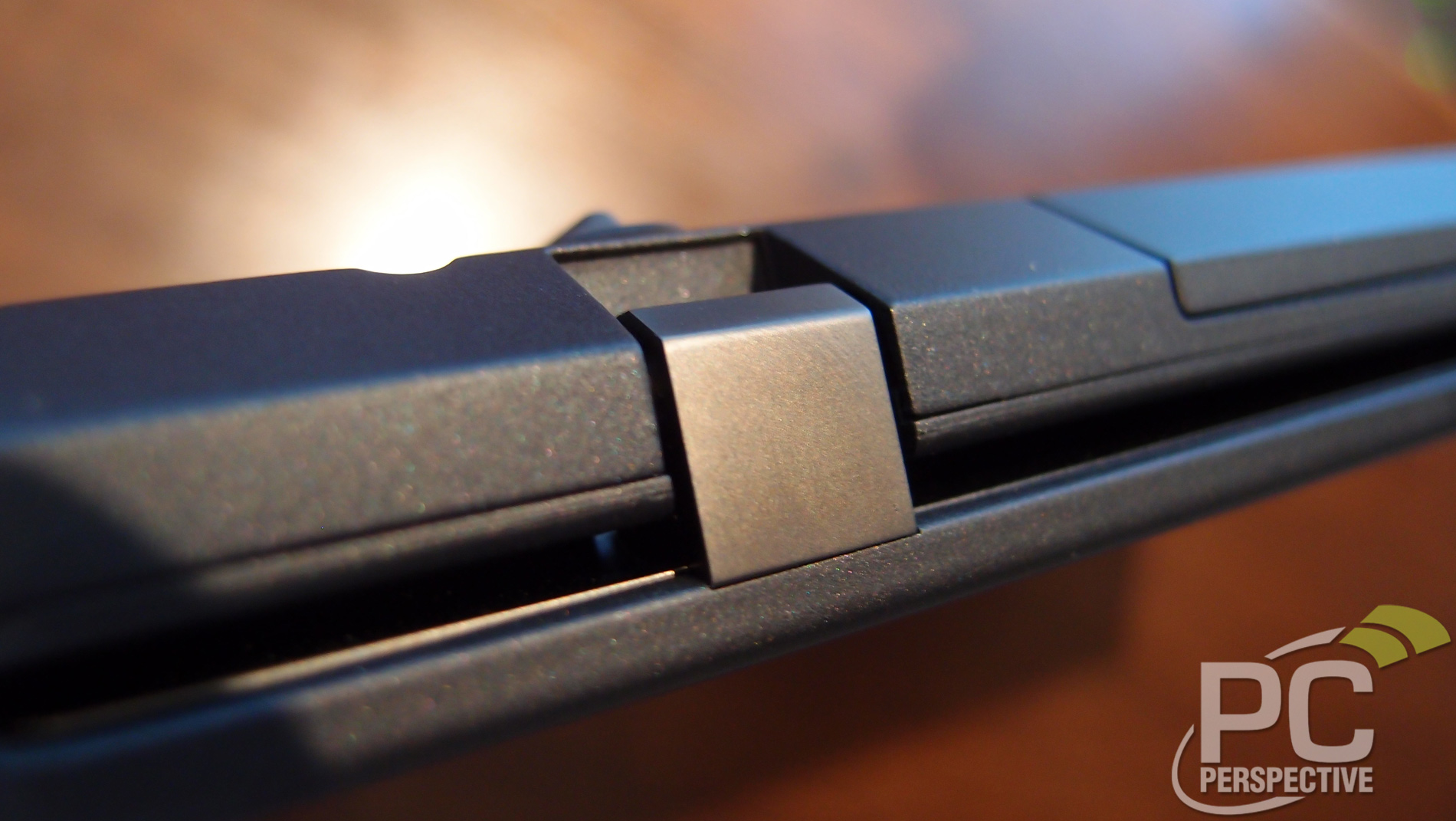 That’s a pretty significant departure from the design of the T430s, which—as it currently appears—could represent the last T4xxs model that will provide such powerhouse options at the obvious expense of battery life.  Although some markets already have the option of the ThinkPad S440 to fill the Ultrabook void within the ThinkPad 14-inch range, that notebook can even be outfitted with discrete graphics.  The T440s top-end configuration, meanwhile, consists of a 15W TDP dual-core i7 with integrated graphics and 12 GB DDR3 RAM.  In other words, it’s powerful, but it’s just not in the same class as the T430’s components.  What’s more important to you? 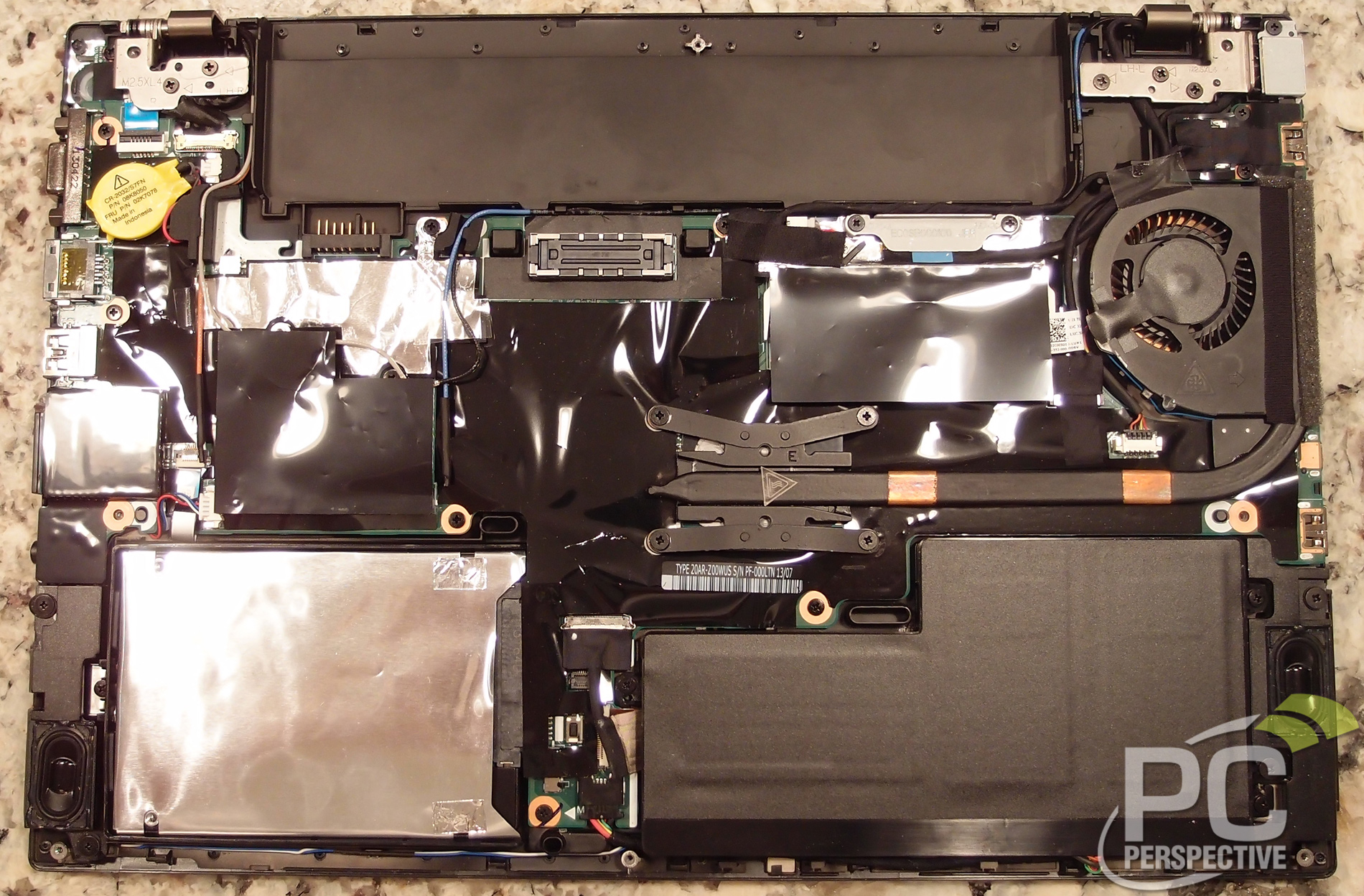 The T440s configuration we received for review has actually been replaced with other superior options already (containing the i5-4300U CPU instead), the closest of which is most likely the model 20AQ004FUS, whose specs are identical apart from the processor.  The MSRP for this unit is $1,550, though it can be found currently for under $1,500.  Even the most expensive model available—the 20AQ004JUS, which features the i7-4600U, 8 GB RAM, and a 256 GB SSD, retails for $1,900, which is only slightly above the price our review unit initially hit the market with. 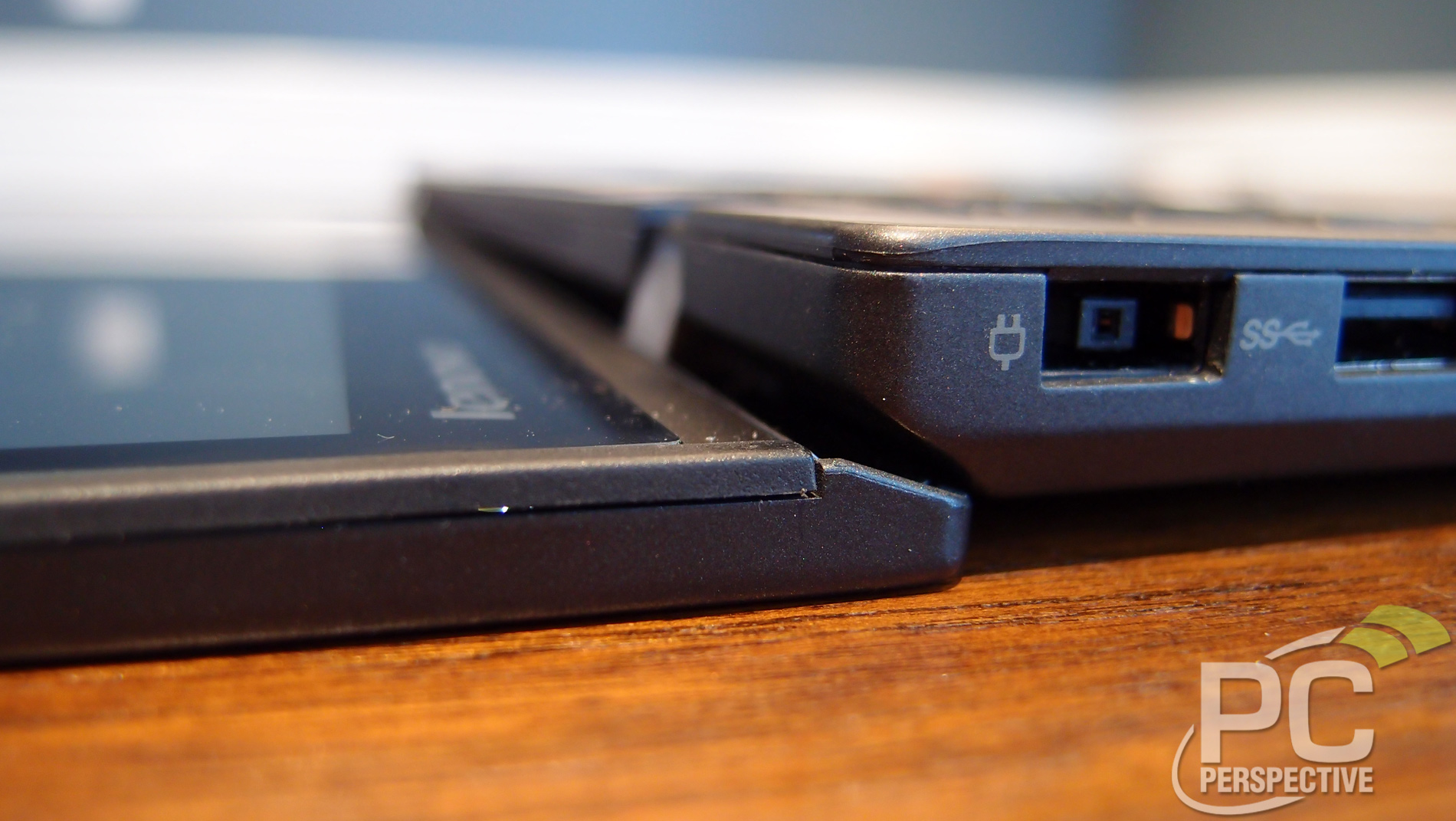 If you’re trending toward the thin-and-light, you might as well embrace the affiliated advantages.  It’s with this realization in mind that Lenovo has managed to shave even more weight off the case of the T440s to provide a notebook that tips the scales at just 3.83 lbs. with the standard battery installed, and still only 4.21 lbs. with the 9-cell battery.  Although weight isn’t everything, that’s a very portable 14-inch notebook, and one which manages to trump such close rivals as Dell’s E7440 (3.9 lbs. with the 45 Wh battery installed), even if the Dell does include what is likely a more robust casing with Tri-Metal corners and a somewhat more rigid display lid. 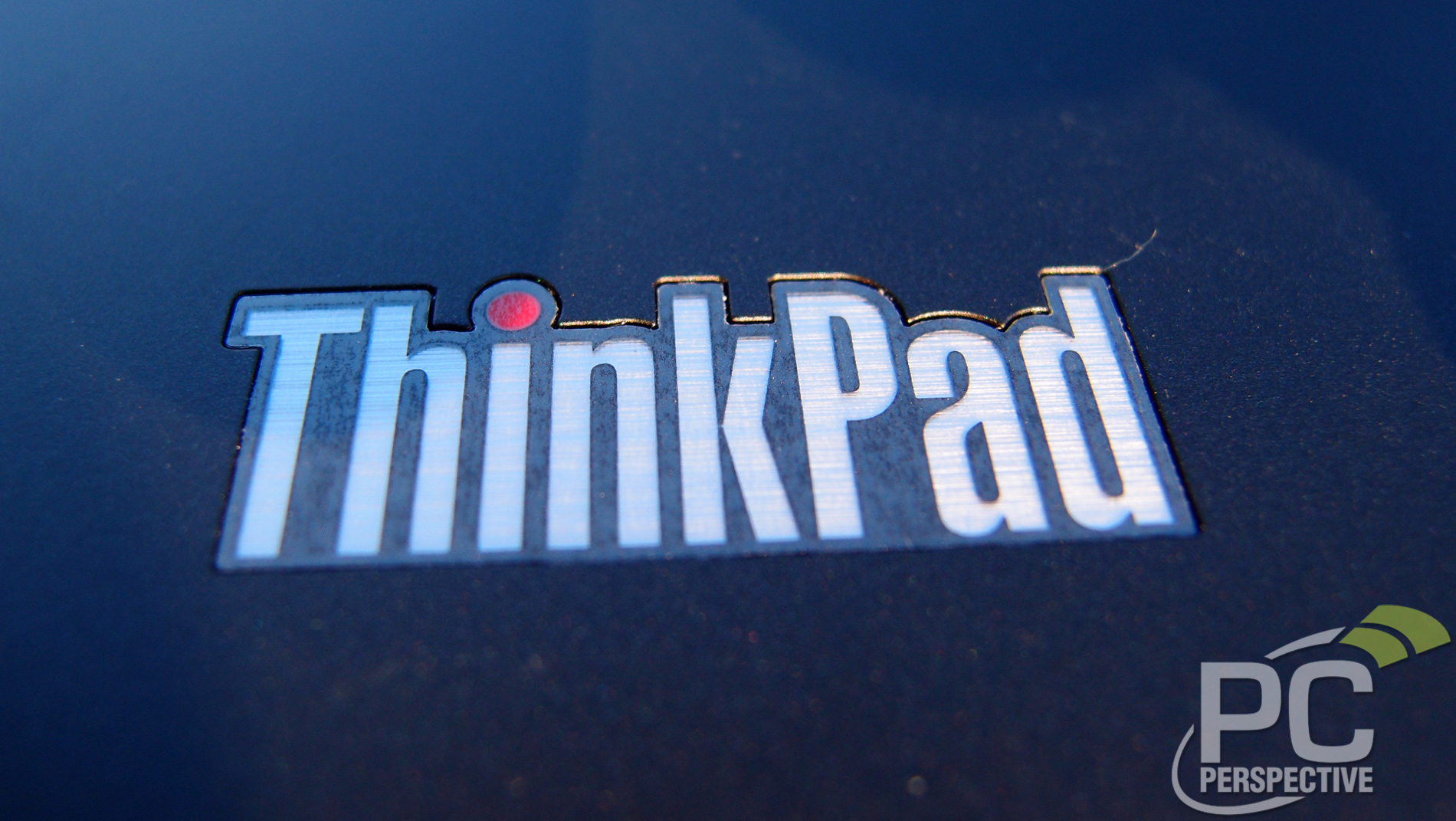 The case materials Lenovo chose for the T440s include hybrid carbon-ﬁber reinforced plastic for the display lid and trusty magnesium alloy for the bottom.  Ergonomically-speaking, the material feels smooth and comfortable, though it’s a bit more slippery than the older plastic models were (which is most notable on the palm rest).  It’s also somewhat less resistant to scratches; there is already one small blemish visible on the palm rest of our review unit, and we have no idea how it got there (though it’s only a scratch in the finish, not the actual material itself).  Nevertheless, the design remains well-planned, with the top of the base unit comprised of a single piece, curved at the front edge of the palm rest to keep wrists happy while typing.

The display lid, meanwhile, is held in place by two stainless steel hinges located a couple inches from either edge, and the hinges provide ample support with minimal wobble during typing.  The carbon-fiber reinforced display lid feels relatively rigid, though the lid can be twisted without too much force and distortions are visible on the display when pressing in the center from the back.  The whole package feels quite solid as very little flex is evident in any location except the center of the base, where it’s still minimal.

In terms of ports, we’re treated to three USB 3.0 ports, VGA, mini DisplayPort, a card reader, and Gigabit Ethernet.  There’s also a smart card reader alongside all of the other usual suspects (3.5 mm combo audio, Kensington Lock).  On the bottom you’ll find a new variety of Docking Station port which is incompatible with the old accessories; instead, you’ll need to invest in a new ThinkPad Ultra Dock if you’re interested in such connectivity.  Overall, the selection of ports is fairly robust for a 14-inch business Ultrabook, and a few bells and whistles (such as dual video outputs, the Smart Card Reader, and a small hatch on the side for a SIM card) help to really set it apart. 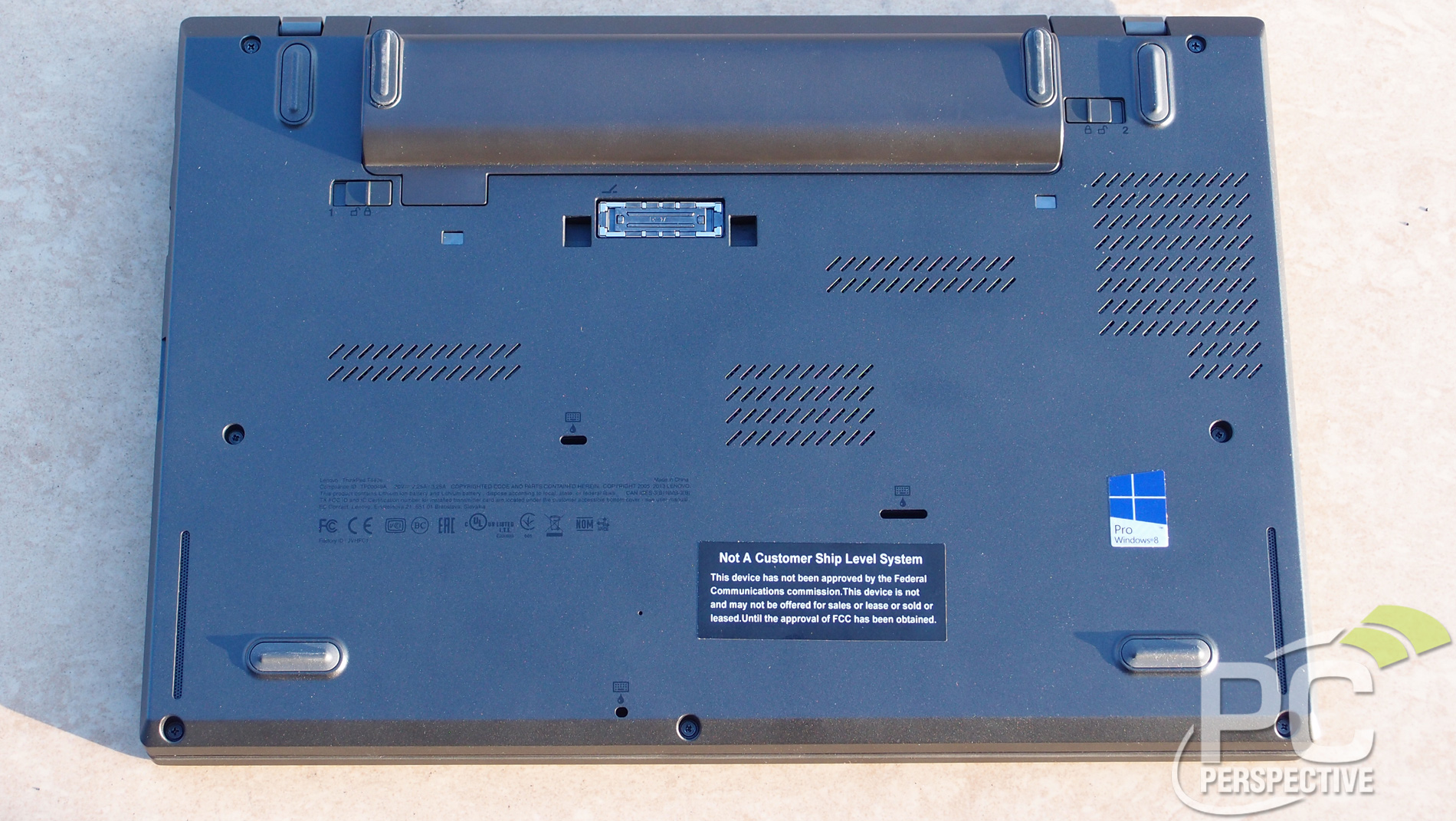 Maintenance on the T440s is pretty simple in the world of Ultrabooks from which it hails.  Following the removal of eight Phillips-head screws on the bottom, the rear magnesium panel is then pried upward using a plastic scribe to dislodge the panel from the base unit.  The only tricky part is to ensure that you double-check any uncooperative screws; on our review unit, we had to pry upward while unscrewing on a couple of them to get them to back out of the threaded sockets in the base unit.  After that, the panel comes off pretty easily.  Beneath it lies access to just about anything you’d ever want to replace, including the storage devices, wireless card, CMOS battery, internal battery, CPU, heatsink/fan, and secondary RAM slot (the primary SODIMM is soldered to the motherboard).

A quick overview of the HP EliteBook 2540p