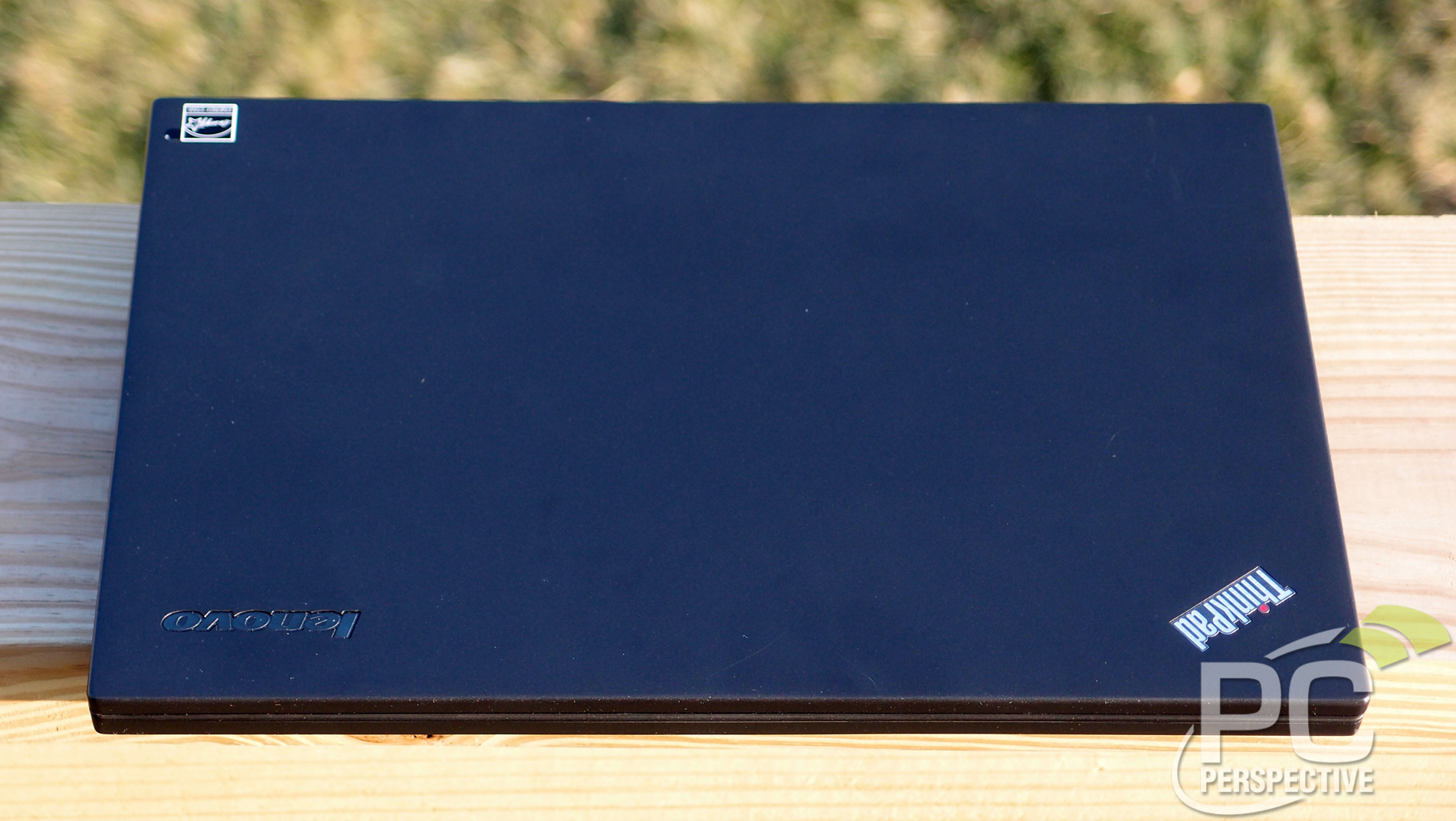 Considering the low temperatures and noise levels we’ve seen from the T440s throughout our testing, it will be interesting to discover how well it actually performs.  Granted, it’s packing a low-voltage, 15 W TDP CPU (as compared to the 35 W TDP CPU in last gen’s T430s), but it still seems unlikely that we’ll find truly stable Turbo frequencies at play given the constraints.

The most interesting comparison of all today will most likely be with the IdeaPad Flex 14, which—though notably different in the realm of construction—shares many of the same specifications.  Even the RAM (while double that of our T440s review unit) is still merely single-channel, so there’s a relatively level playing field.  Having said that, nearly as intriguing will be our inclusion of our ThinkPad X240 benchmark results as well—a review which is (as of this writing) yet to be posted—as these machines are quite similar in many ways as well.

Before we delve any further into the subject of performance, let’s tackle the stress testing issue.  Earlier we discussed the uncharacteristically low temperatures and simultaneously quiet operation of the T440s, a combination which left us with our share of concerns on the topic of performance.  To test this, we performed a stress test on the system using synthetic load and monitored both temperatures and clock rates to see how it would respond.

We were pleased to discover that during 100% CPU stress, the machine did not buckle; we observed no throttling—and, on the contrary, a stable max Turbo Boost CPU frequency of 2.3 GHz, which is impressive.  Temperature readings from the CPU thermal sensor never exceeded 60°C, and again, that’s with the unfathomably low noise levels as well.

However, once we applied GPU stress (even without any CPU stress), the system’s performance took a quick turn for the worse.  Immediately, the CPU began throttling to 900 – 1000 MHz, while the Intel HD Graphics 4000 GPU clock rate found a home near 700 MHz, below the maximum of 1000 MHz for the Core i5-4200U CPU integrated graphics.  Loading up the CPU subsequently predictably made matters even worse; under these conditions, the CPU drops yet another 100 MHz on average and the GPU follows suit, resting near 600 MHz.  Under both full GPU load and GPU + CPU load, the maximum temperatures we witnessed were 60°C (CPU) and 66.1°C (GPU).  This is following a full half hour of 100% system load.

What does this mean?  We cannot know without benchmarks, but it does suggest that we should expect GPU results somewhat below that of other competing models with similar components.  We’ll let our benchmarks do the talking, however… let’s dive in and see what transpires. 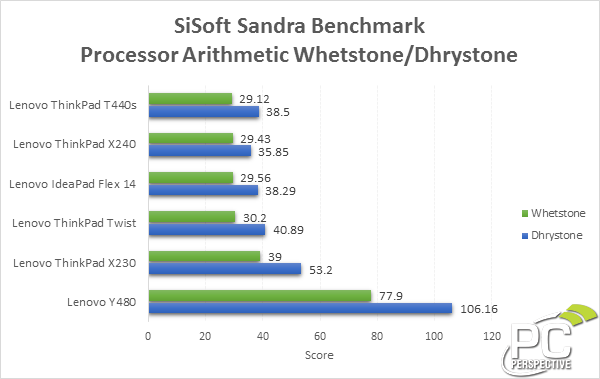 Absolutely no surprises here.  The T440s’ results fall perfectly in line with the X240’s and the Flex 14, both of which hardly even diverge from the ThinkPad Twist’s Core i5-3317U results, though the Twist actually fares a slight bit better than all three Haswell competitors in the Dhrystone assessment.  If nothing else, it’s worth noting that the ThinkPad X230’s scores from a year ago (thanks to its full-voltage chipset) are 34–38% higher—and that’s precisely the reason for the outcry regarding the switch to low-voltage.  Yes, you get the stellar battery life that we observed on the previous page, but not everyone needs 24 hours of runtime.  We may have in fact crossed the threshold into excessive battery life, now, which is bizarre as just a couple of years ago we were saying the same thing of CPU power.  Depending on your perspective, this could be a positive or negative development. 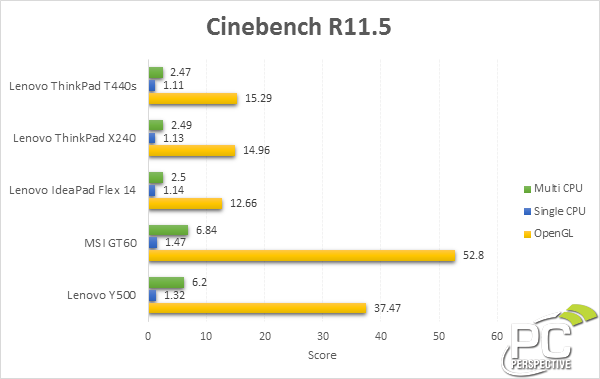 Again, results within negligible distance of one another, apart from a surprising boost over the Flex 14 in OpenGL performance from both the T440s and X240.  Needless to say, full-voltage quad-core units such as the MSI GT60 and the Lenovo IdeaPad Y500 leave their ULV peers in the dust.  We’ve included those two for context. 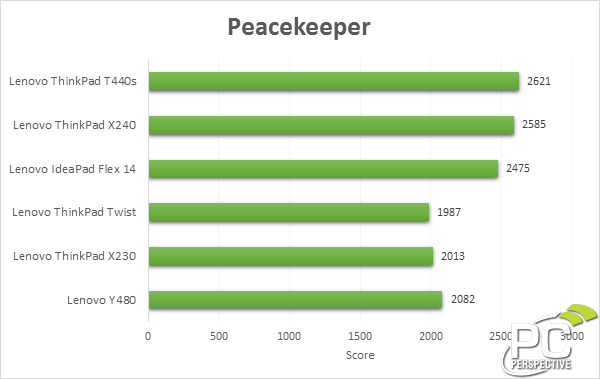 Although this benchmark is also browser-dependent, the T440s and X240 just barely edge out the Flex 14.  All three tests were performed using Internet Explorer 11, whereas the ThinkPad Twist, X230, and IdeaPad Y480 were in earlier versions of the browser.

Next, to judge general performance of the machine, we first turn to PCMark 7. 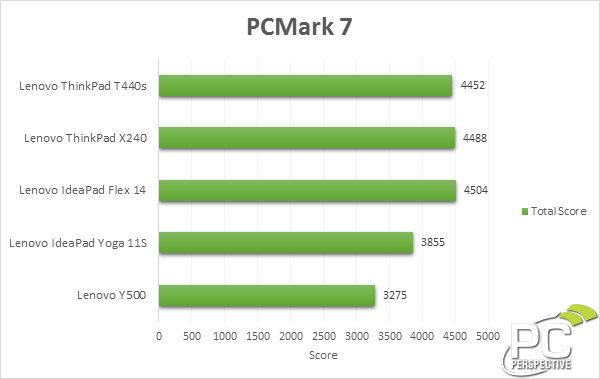 Again, it’s a dead heat for the T440s, X240, and Flex 14, but this time it’s more thanks to the solid-state drives in each than anything else.  Scores above 4,000 in PCMark 7 are excellent, and these results corroborate our impressions of the T440s as a very fast performer in general operation. 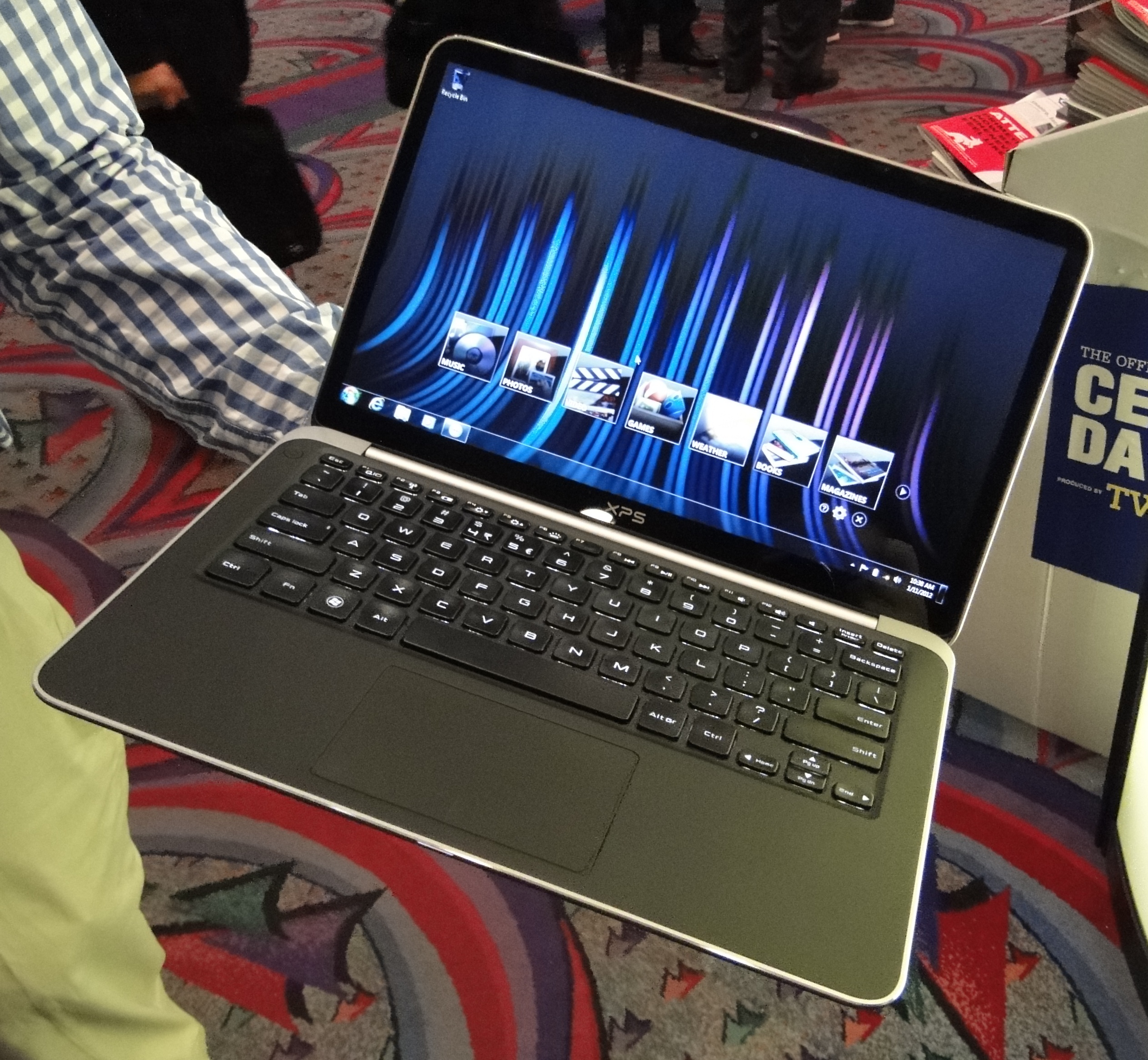