Lenovo’s latest entry in the X series is more than just an evolution: it’s a reprioritization of the basics.

Alongside our T440s review unit was something slightly smaller and dear to our hearts: the latest entry in the ThinkPad X series of notebooks.  Seeing as this very review is being typed on a Lenovo X220, our interest was piqued by the latest refinements to the formula.  When the X220 was released, the thin-and-light trend was only just beginning to pick up steam leading into what eventually became today’s Ultrabook movement.  Its 2012 successor, the ThinkPad X230, went on to receive our coveted (and rarely bestowed) Editor’s Choice Award, even in spite of a highly controversial keyboard change that sent the fanbase into a panic.

But all of that has since (mostly) blown over, primarily thanks to the fact that—in spite of the minor ergonomic adjustments required to accustom oneself with what was once a jarringly different keyboard design—the basic philosophy remained the same: pack as many powerful parts as possible into a 12.5-inch case while still maintaining good durability and battery life.  These machines were every bit as capable as most other 13- and 14-inch notebooks of their time, and they were considerably smaller, too.  About the only thing they lacked was higher-resolution screens, discrete graphics, and quad-core CPUs. 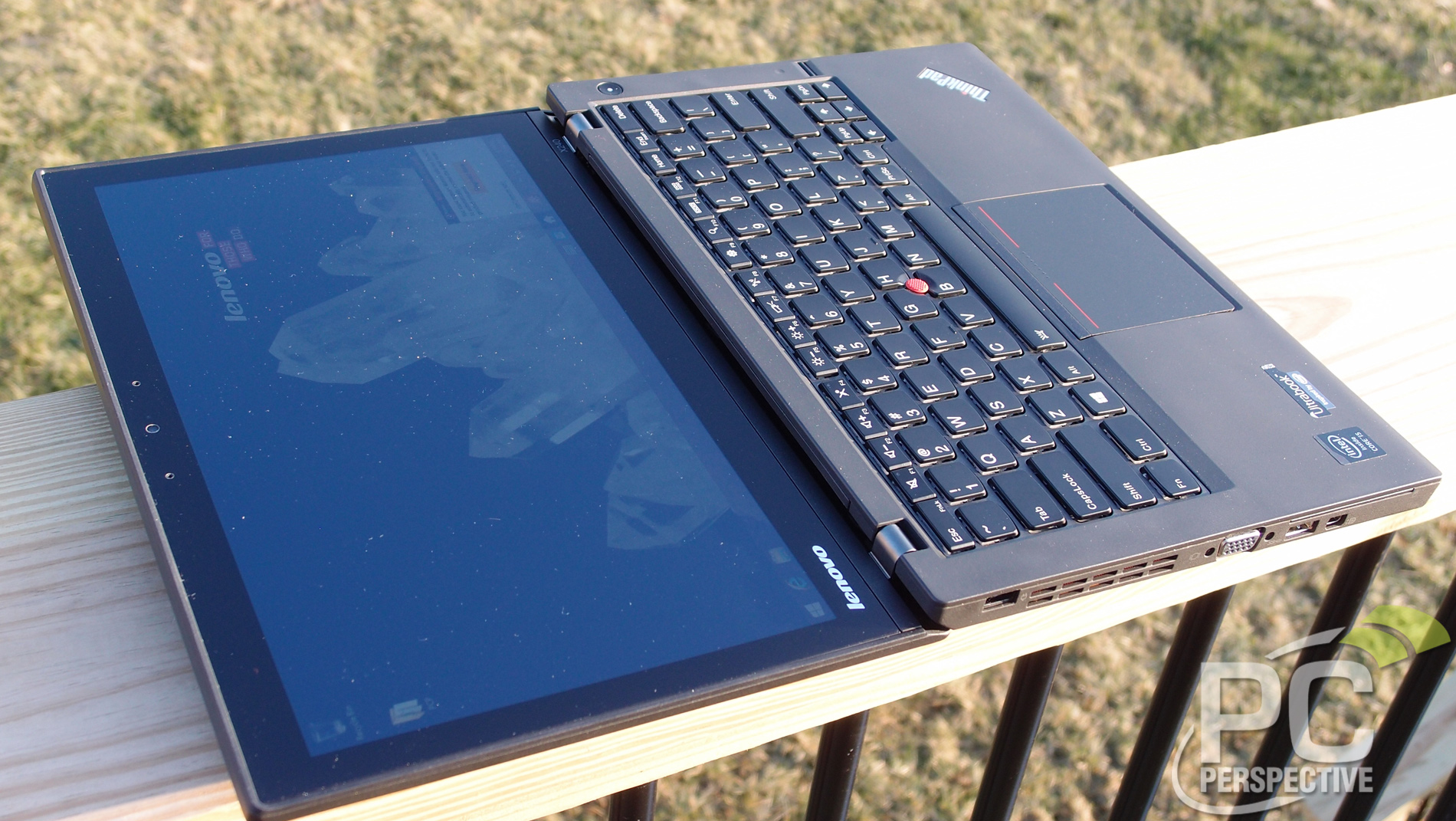 But with the X240 (and the T440s), portability has truly taken center stage, suggesting a complete paradigm shift—however subtly—away from “powerful (and light)” and toward “light (and powerful)”.  Coupled with Intel’s Haswell CPUs and Lenovo’s new Power Bridge dual-battery design, this will certainly yield great benefits in the realm of battery life.  But that isn’t all that’s different: we also find a (once again) revamped keyboard, as well as a completely new touchpad design which finally dispenses with the physical buttons entirely.  Like in the X230’s case, these changes have roiled the ThinkPad purists—but is it all just a matter of close-minded traditionalism?  That’s precisely what we’ll discover today.

Our exact configuration is actually not currently available for purchase, but the closest configuration (Lenovo model #20AL008PUS) is identical except for a slightly better processor (the i5-4300U vs. our i5-4200U).  MSRP for this unit is $1,679, with a current street price of just above $1,600.  Having said that, here’s what our review unit includes: 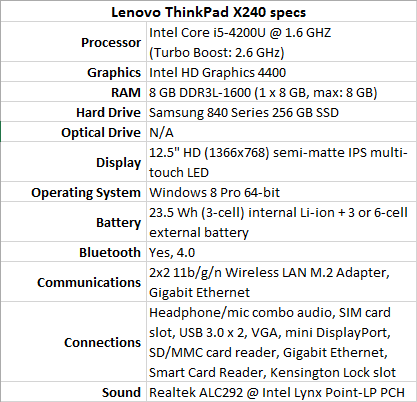 Much like the T440s, the X240’s most telling components are its low-voltage Intel Core i5-4200U CPU (up to 2.6 GHz Turbo Boost) and its maximum supported memory of 8 GB.  In comparison, its predecessor (the X230), was configurable with up to a Core i7-3520M (up to 3.6 GHz Turbo Boost) and up to 16 GB DDR3 RAM—considerably more capable by any measure.  The major benefit of the switch to low-voltage CPUs is—of course—reduced power consumption, which drops from 35 W TDP in the X230’s case down to just 15 W TDP.  That’s a huge plus, but coupled with the RAM limitations, it refines the target market of the X series to exclude those needing workstation-level capabilities (sans the discrete graphics).  It’s a change which won’t bother many people who are simply looking for a quick portable business machine, but for that segment which appreciated the X-series’ ability to transform from four-pound ultraportable into all-purpose powerhouse back at home or the office (while docked or otherwise), it’s an unfortunate regression. 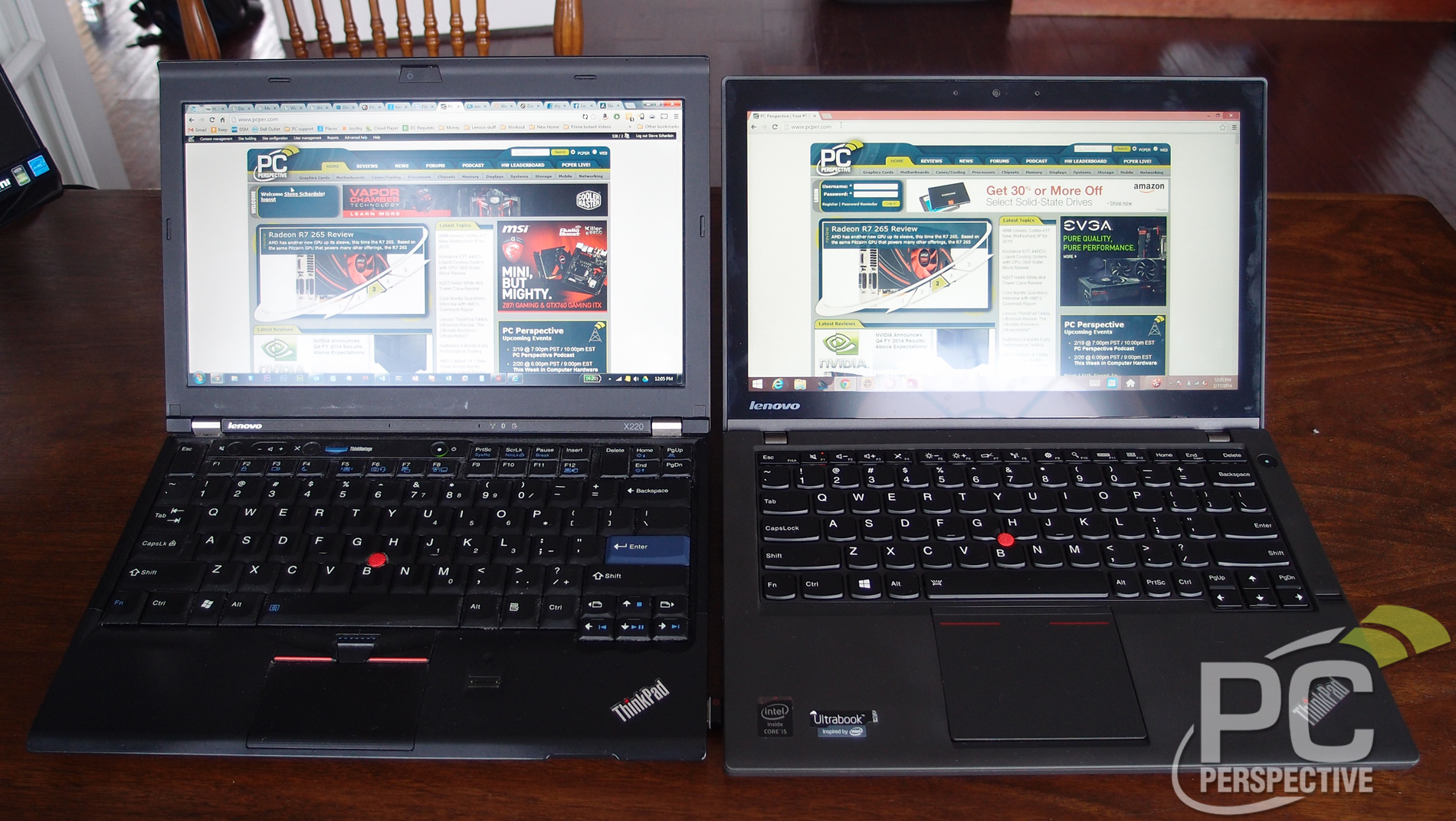 Case in point: your editor’s current machine is (as previously mentioned) a Lenovo X220 with the following specifications: i7-2620M, 16 GB DDR3 RAM, 240 GB Mushkin Enhanced mSATA SSD (primary storage), 500 GB Samsung 840 Series SSD (secondary storage), and 9-cell battery.  Under this configuration, battery life of roughly six hours is common, and there are few things the machine cannot handle for which a more powerful desktop would be needed to suffice.  Weight is a bit higher than may be ideal (at 3.73 lbs. versus the X240’s 3.29 lbs.), but we’re only talking a half pound difference.  It’s entirely possible to spend an entire day unplugged with this machine, then return to a dock with an external monitor and use it for everything from video editing to even some lightweight gaming. 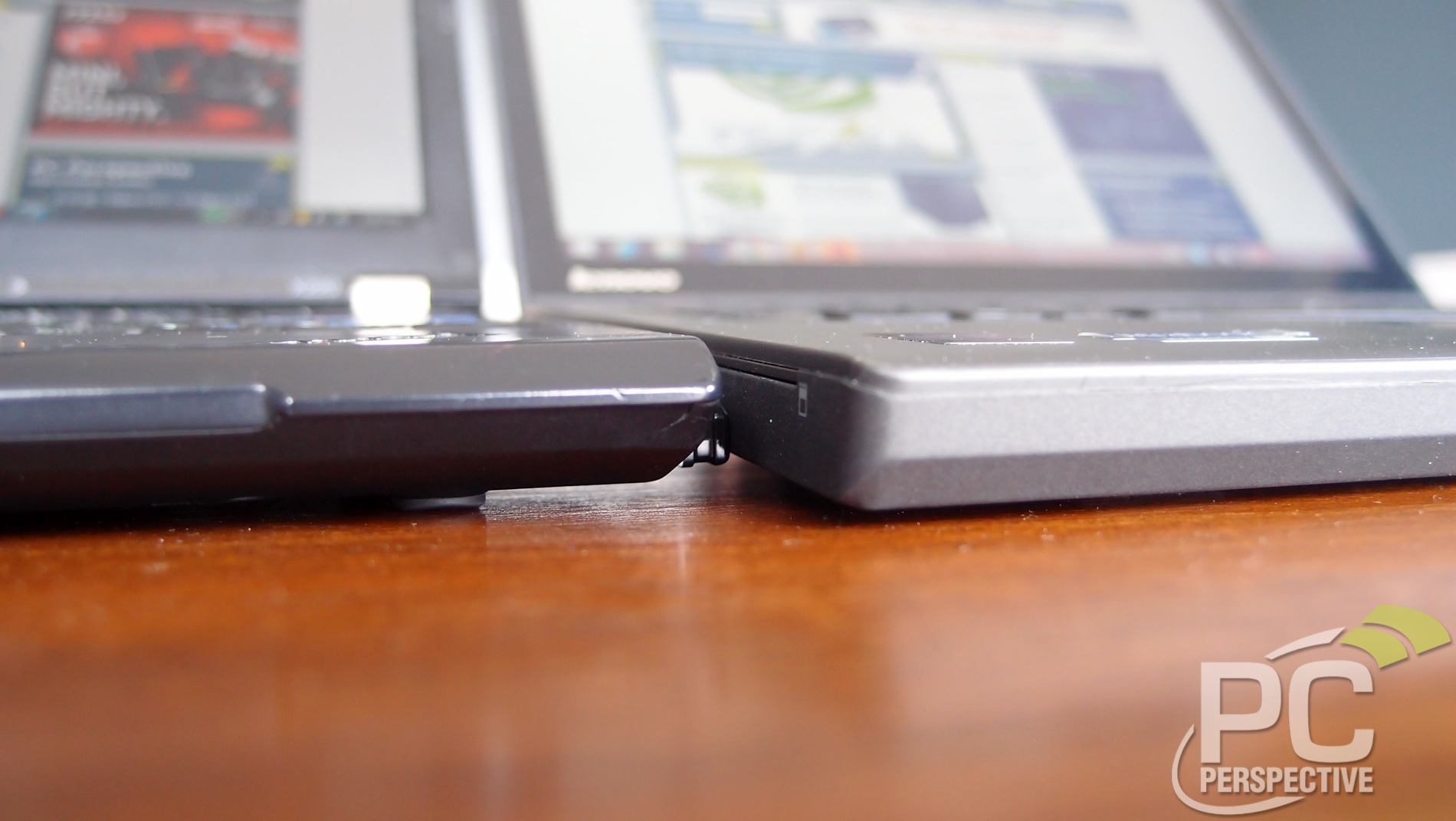 Aesthetically, not much has changed with the X240’s case versus its predecessors.  It’s still the trademark matte black with red accents—as understated as ever, and thankfully so.  The materials have changed, however: the case is now (reportedly) entirely comprised of a glass fiber-reinforced plastic, which feels similar (though slightly smoother) on the display lid, but which has a rougher texture on the palm rest surface which we actually prefer to the T440s’ smoother finish (though it’s completely subjective), as it helps prevent palm slippage while resting one’s wrists.  The magnesium bottom cover of the T440s also feels a little smoother than the X240’s plastic bottom, but neither feels sturdier than the other. 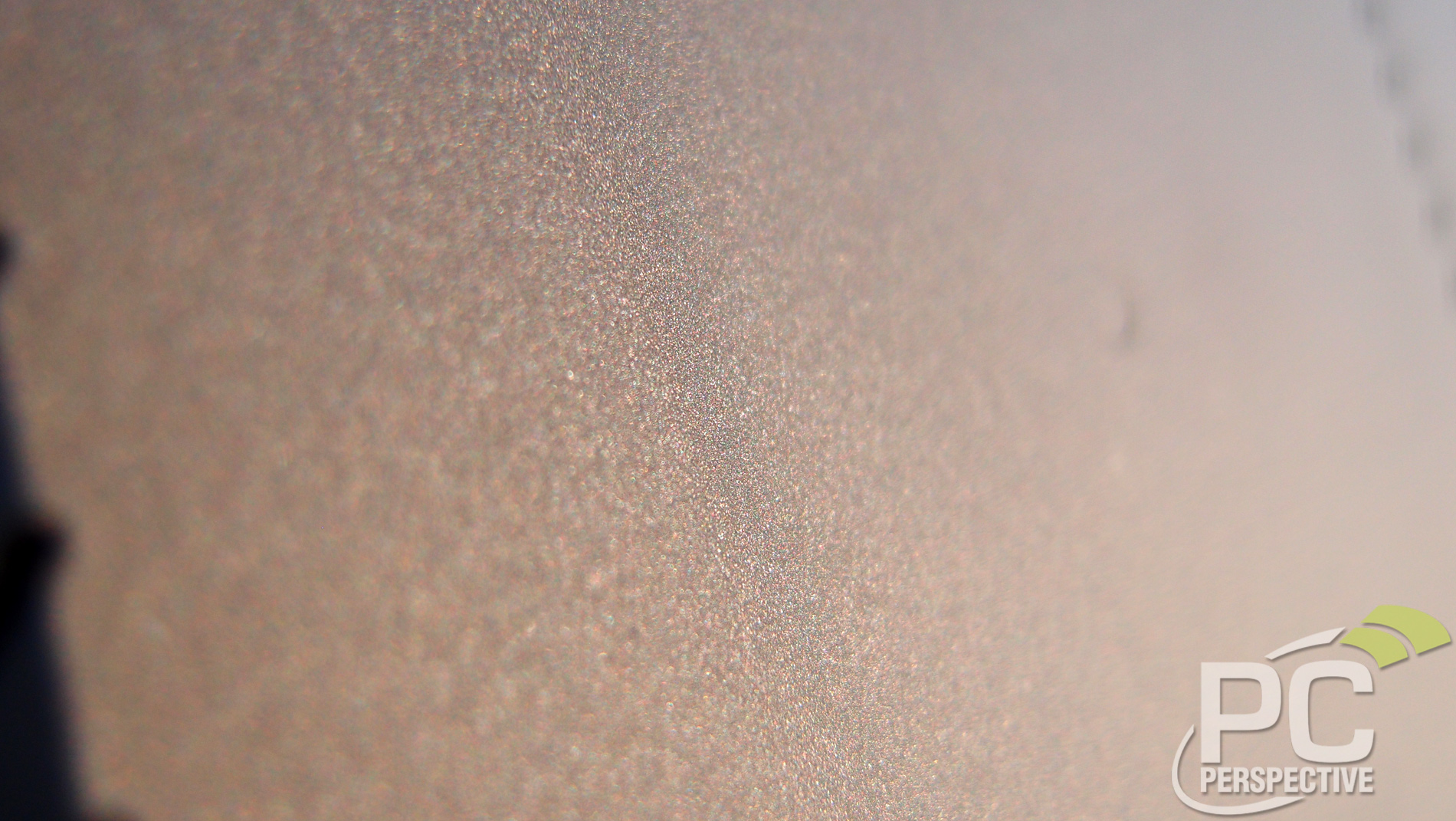 The workmanship is still quite good, though as with previous X-series laptops, there are some areas where the casing gives way under pressure.  To begin with, the left palmrest compresses the top of the smart card slot without much effort, and in fact, the entire center of the base unit near the touchpad can be depressed with only moderate pressure.  On our review unit, we even encountered a clicking sensation from the right palm rest when this pressure was relieved—the existence of which really makes the build feel cheap, even though it isn’t.  The top center plastic strip between the hinges (above the keyboard) is also quite susceptible to flexing under pressure, though this area isn’t likely to be a problem in practical use (unlike on the X230 and X220, where this area shared space with the control center and power button). 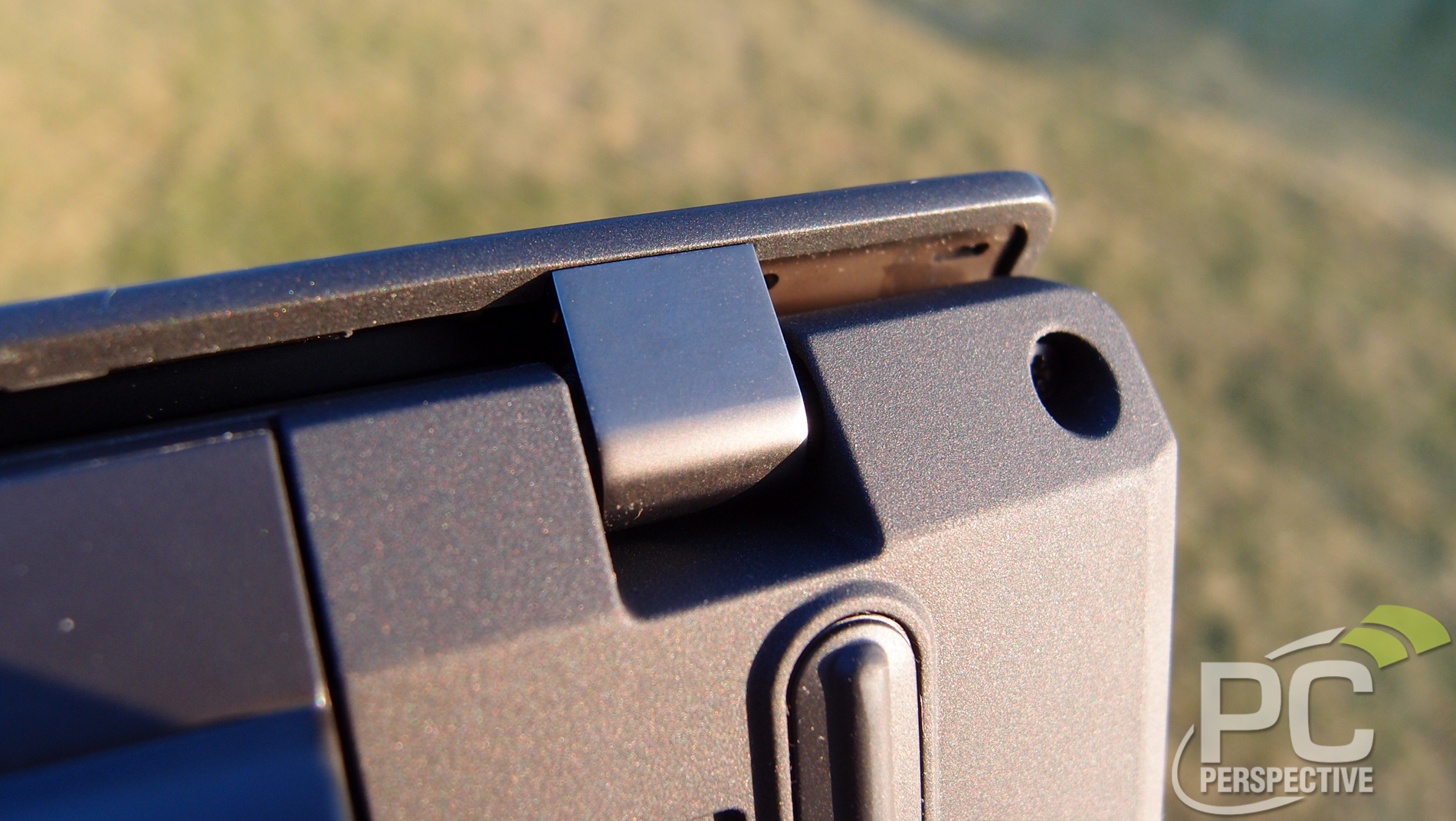 The display lid exhibits only reasonable torsion resistance, twisting under moderate pressure and exhibiting distortions on the panel which were not visible on either the X220 or X230.  It closes fairly tightly against the base, however, so this is unlikely to be a problem unless the unit is dropped while open.  The hinges do a fine job of supporting the display, holding it tightly in place and preventing the wobble that is associated with typing on many ultraportable units.  Tapping still produces a momentary vibration, but it’s relatively minor. 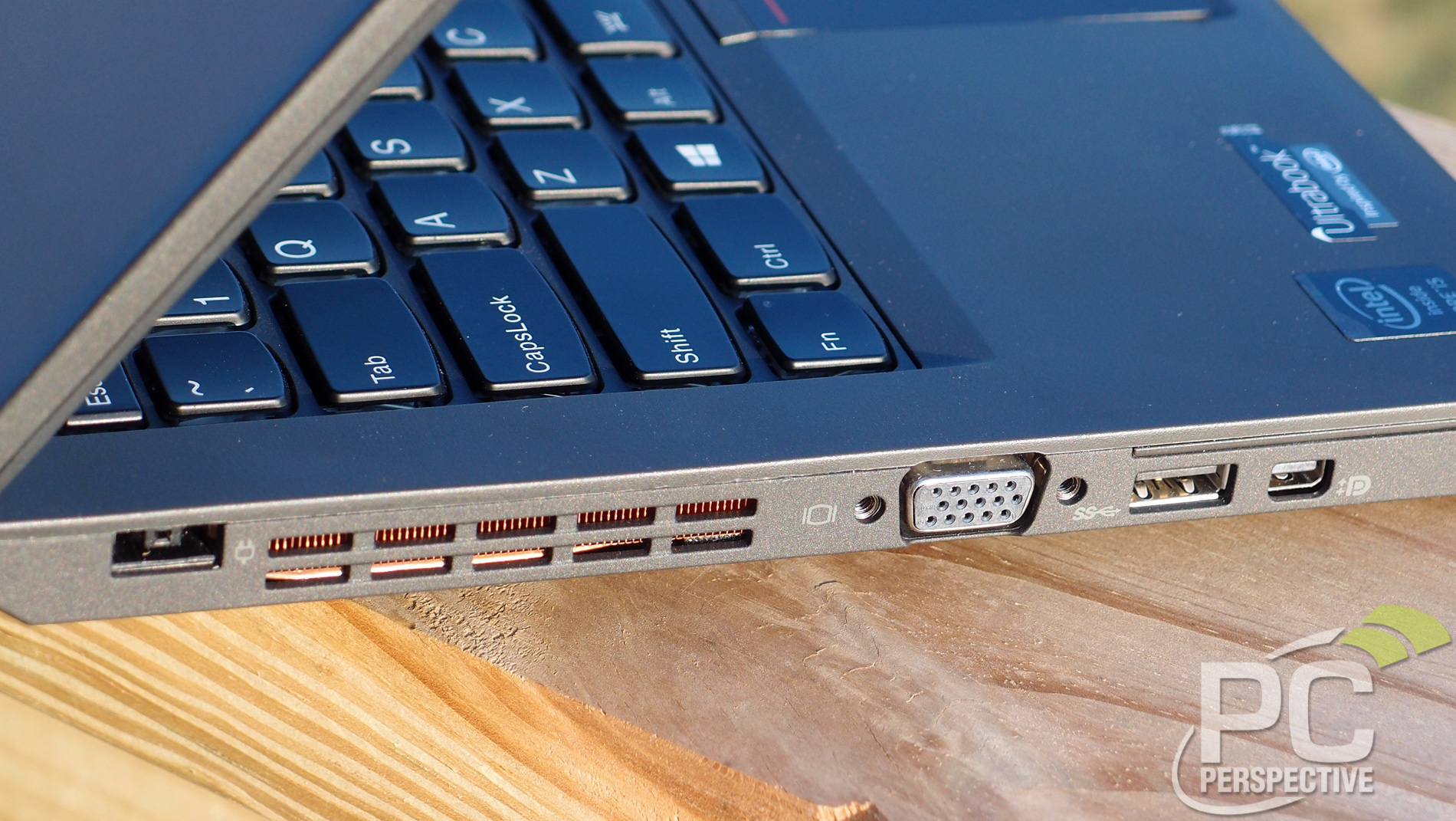 Interestingly, while the X220 and X230 offered three USB ports, that number actually been cut to two on the X240, both of which are USB 3.0, and one of which is powered.  Consuming a slight bit of extra real estate is the same right-side-mounted SIM card bay that we found on our T440s, which saves you the trouble of having to remove the battery to insert/remove a SIM card.  Elsewhere, you’ll still find Gigabit Ethernet, a card reader, VGA out, mini DisplayPort, the aforementioned smart card slot, and combo audio.  Rounding out the bunch is a Kensington Lock port in the back left corner.  The number of USB ports is the obvious (and only) disappointment here, compounded by the fact that the left side port is crammed in between the DisplayPort and VGA ports, making connection of larger USB devices difficult or impossible if the other ports are in use. 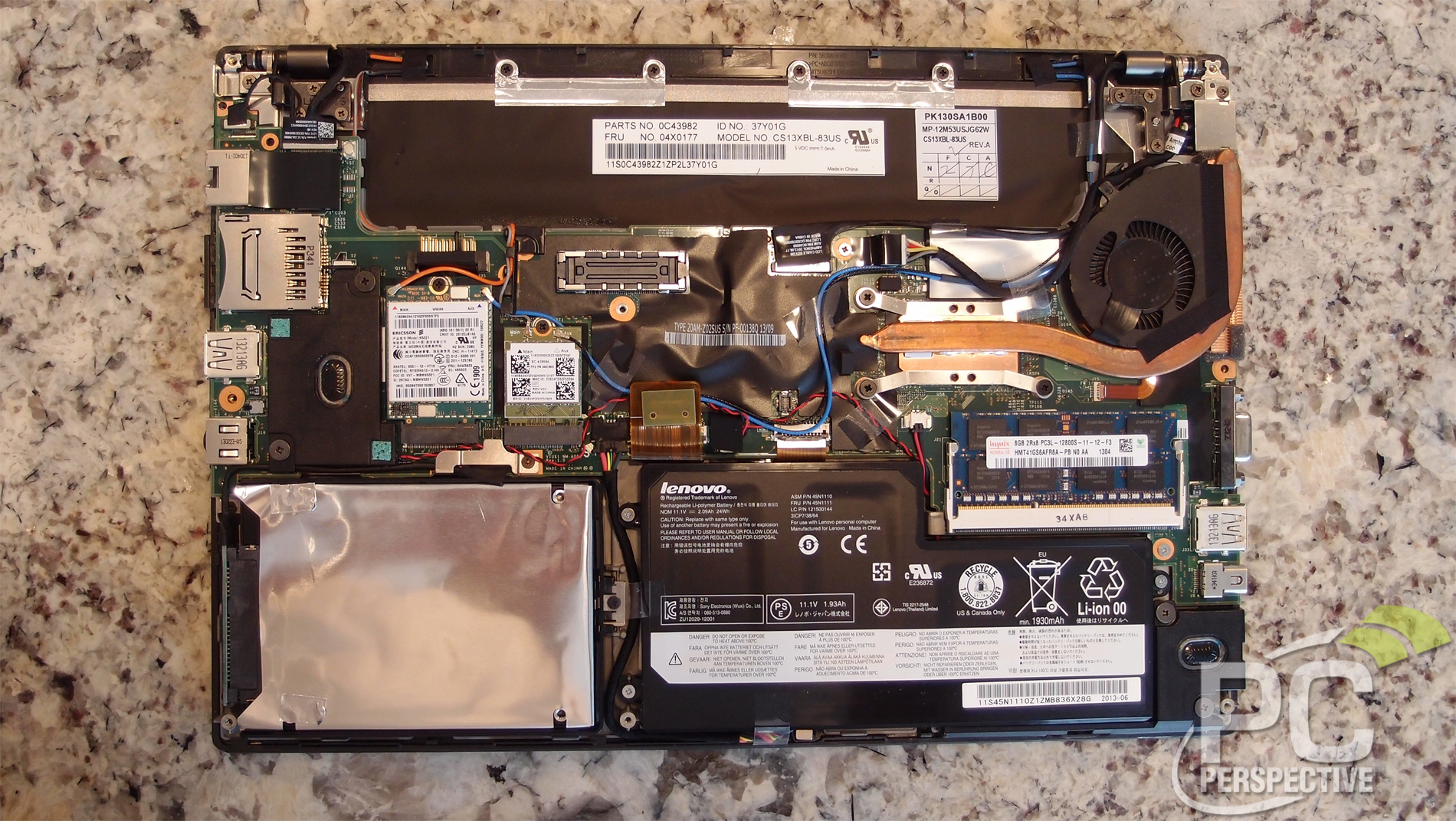 Finally, on the subject of maintenance, the X240 is a little bit more stubborn than the T440s, but no harder to get into than the X220, seeing as replacement of anything other than RAM or the 2.5-inch drive (such as the mSATA SSD/WWAN/WLAN adapter) on the X220 required removal of the keyboard and palm rest.  There are only eight Phillips-head screws securing the bottom cover to the base unit, but unlike the T440s, the clips on our X240 review unit were considerably harder to disengage.  At a couple points we were concerned we might damage the unit, but with a bit of patience and care it eventually came off without a problem.  Underneath the cover, you’ll find access to practically all of the major FRUs, with one major exception: the keyboard.  Let it be known that should you ever need a keyboard replacement for the X240, the entire machine must be disassembled, and everything from the system board to the LCD assembly must be removed first.  It’s literally a bottom-up operation.