Taking a closer look at the storage device responsible for that high PCMark 7 score helps us to visualize the tangible versus intangible benefits.  Our first test, AS SSD, provides an already interesting assessment: 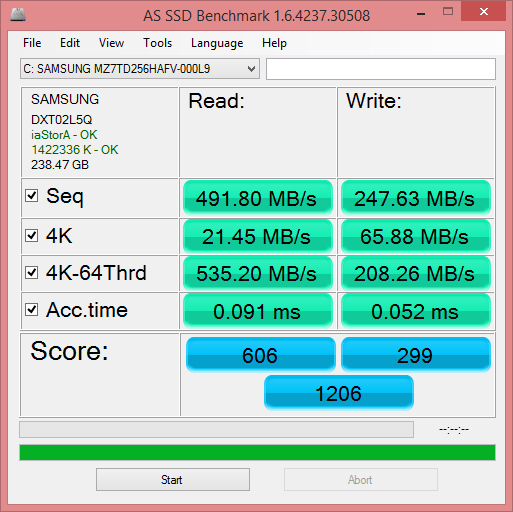 Keep in mind that the X240, T440s, and Flex 14 all include the same solid-state drive, but the X240 includes double the capacity of the other two notebooks (256 GB vs. 128 GB).  But check out that score in comparison to the T440s and the Flex 14.  It’s a huge difference, with the X240 easily taking first place over all of the other systems in our comparison (including the G750JX-DB71 and GE40 20C, the latter of which incidentally is the weakest of the bunch).  The reason for the astronomically high score of 1206 for the X240 is simple: not only are read speeds impressive—especially the 4K 64 threads test, in which the drive scored a whopping 535.20 MB/s—but write speeds are nearly double that of the 128 GB version.  As we said in our T440s review, that’s just one more reason to choose the 256 GB model instead if you’ve got the dime for it. 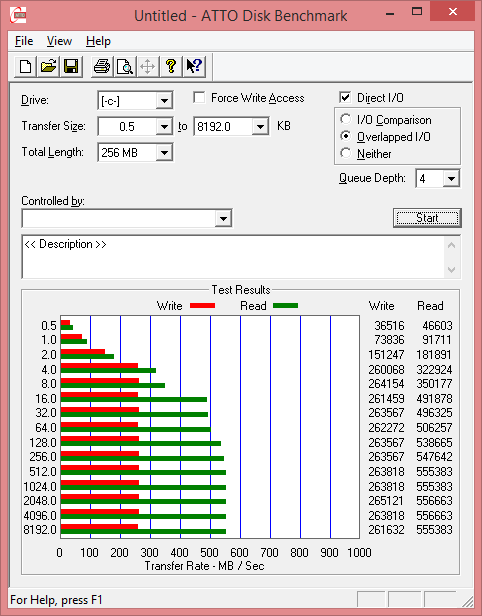 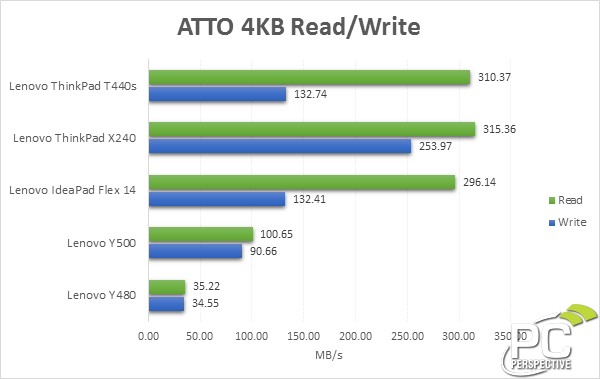 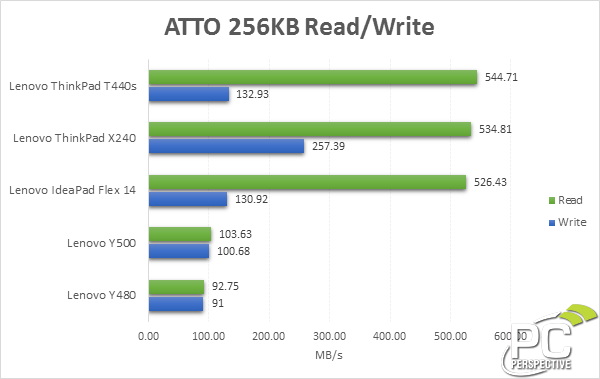 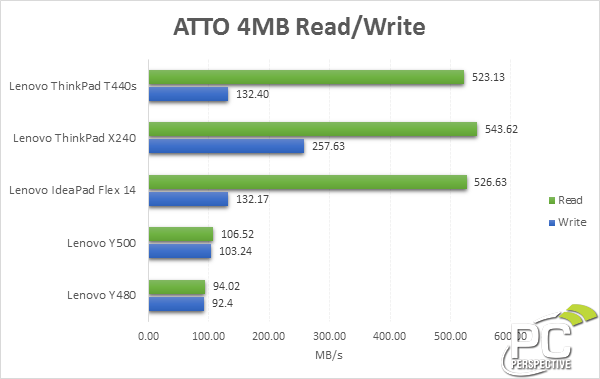 Take a look at those write speeds and the difference is once again clear. 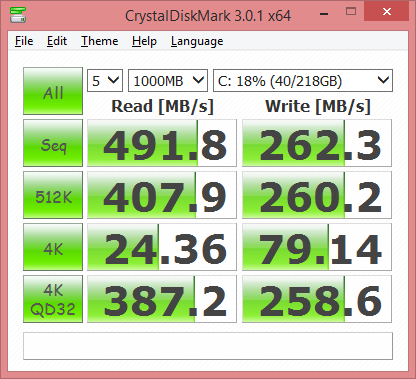 Again, no surprises; just what we’d expect from a quick drive. 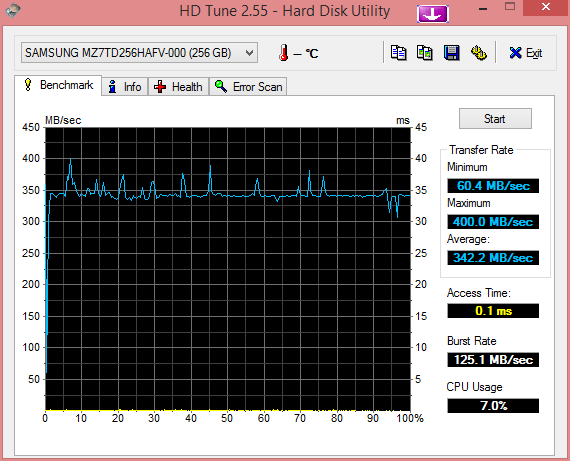 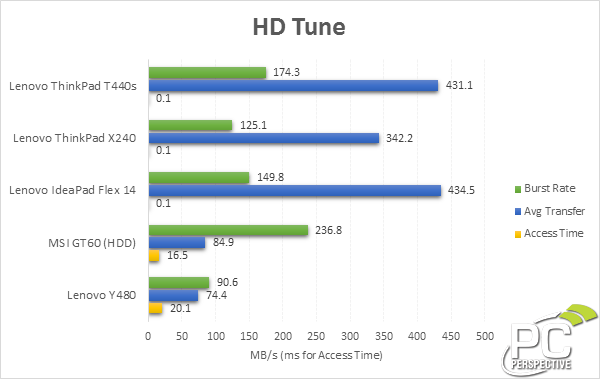 There’s some CPU at stake, but not a lot of drawbacks apply to this drive.  Versus the 128 GB, if cost isn’t a concern, it’s a no-brainer.

With every ULV notebook we review, the same preface to this section applies: low-voltage gaming was once an oxymoron, but just because we’ve seen such a huge advancement in chipset efficiency over the past couple of years doesn’t suddenly make it a good idea.  The X240’s Intel HD Graphics 4000 features clock rates ranging between 200 MHz and 1000 MHz, but as we saw earlier, the top end of that spectrum is not possible with the X240 due to significant firmware constraints.  So with expectations in check, let’s dive into a few gaming benchmarks to see if we can surprise ourselves. 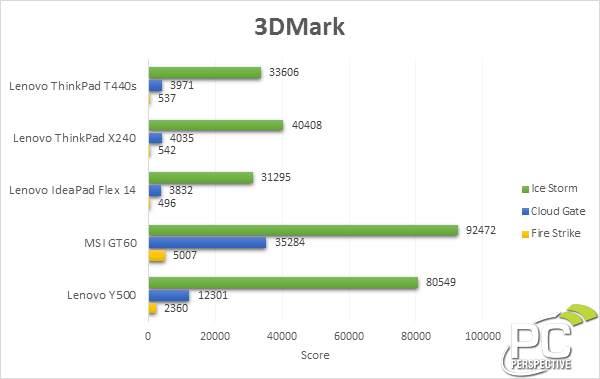 Well, color us surprised.  After receiving scores of ~31,000 (Ice Storm) from both the T440s and the Flex 14, the X240 suddenly manages nearly 30% better with a score of over 40,000.  The other results aren’t quite as striking, but they’re still not bad for a ULV system.  We ran this benchmark twice just to double-check our scores and found consistent results. 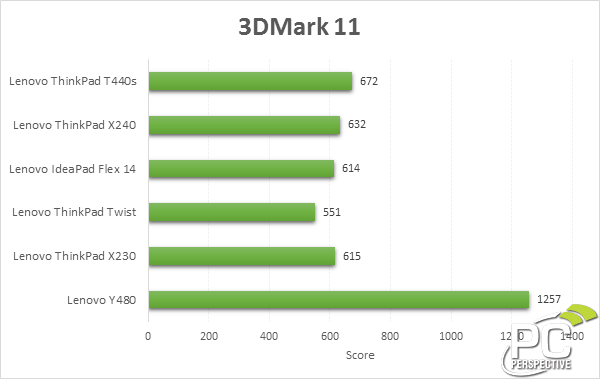 Things look considerably more logical here, with all three models again within sight of one another.

So how does all of this translate into actual gaming performance? 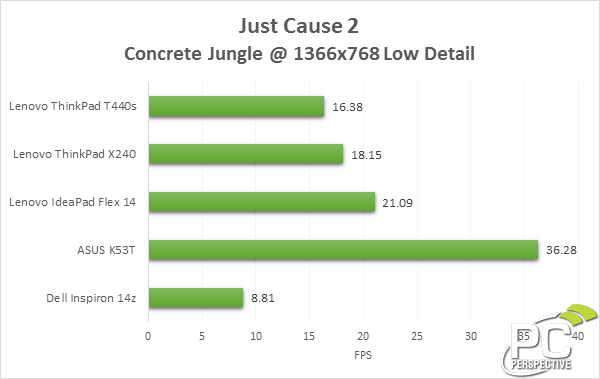 Regardless of comparisons, it’s pretty clear that you won’t be playing Just Cause 2 on the X240.  But it at least manages better than the T440s. 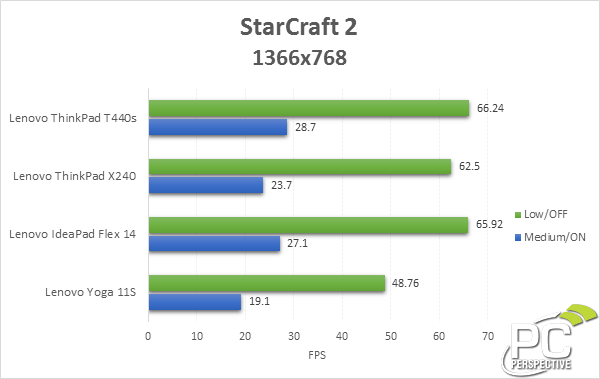 Now here’s a game that works—as it does on nearly anything (even the Yoga 11S!).  With 63 frames per second in our benchmark, there should be no trouble enjoying SC2 on the X240.  Just don’t bother turning up the graphical settings, as anything higher slices that score by more than half. 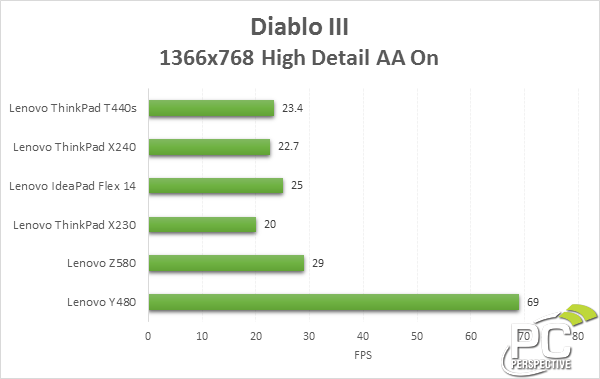 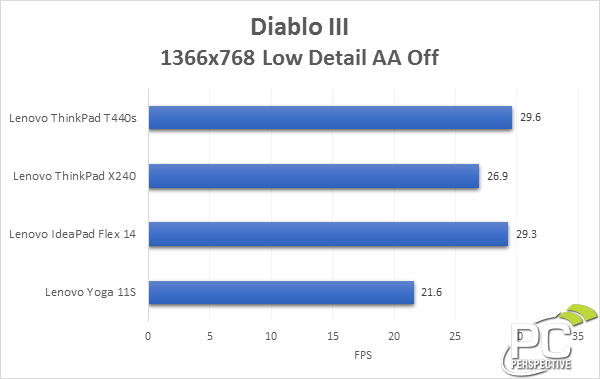 Diablo III is pretty forgiving also, but unfortunately, it isn’t forgiving enough for the X240.  With 27 frames per second in our relatively tame benchmark, landing in the middle of a large group of Maniacs will quickly feel as much like Hell as the developers had probably intended.

We also ran our Bioshock Infinite benchmark for purposes of record-keeping, and received a result of and 19.05 fps on 768p, Low Settings.  We didn’t bother plugging in an external monitor for higher-resolution tests. 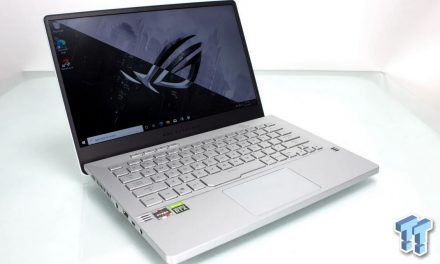