To best gage the quality of the GPU cooler under review, GPU temperature was taken with the graphics card idle and under load. To replicate GPU idle conditions, the system was rebooted and allowed to sit idle for 10 minutes. To replicate a stress graphics load, FurMark was run over a 30 minute period running at 1280×1024 resolution and 8x MSAA in Burn-in Test mode. After each run, the system was shut down and allowed to rest for 10 minutes to cool down. This procedure was repeated a total of 12 times – six times for the stock speed runs and six times for the overclocked speed runs.

Temperature measurements were taken directly from the GPU thermistors using TechPowerUp GPU-Z v0.7.7. For both the idle and load temperatures, the highest recorded value in the application were used for the run. Note that the temperature values are reported as deltas rather than absolute temperatures with the delta value reported calculated as GPU temperature – ambient temperature.

Note that the temperature values are reported as deltas rather than absolute temperatures with the delta value reported calculated as CPU temperature – ambient temperature. For all tests, room ambient temperature was maintained between 23-25C. Sound measurements of the system cooler where taken with the sound meter placed 3 feet away from the system with all other devices in the room silenced. The Sound Meter Pro applet on a Samsung Galaxy S3 mobile phone was used to measure decibel level. 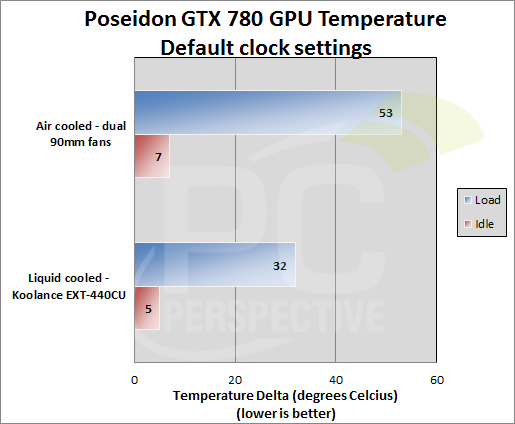 Adding active coolant flow to the DirectCU H2O cooler had a dramatic impact on GPU temperatures at factory default speeds. GPU temperatures went down by over 20C under load, while differing by a mere 2C at idle. However, the GPU temperature with air cooling only is very respectable considering the average temperatures achieved under load with the minimal operating noise of the unit.

Using the ASUS GPU Tweak v2.5.4.2 performance software, the graphics card was overclocked to its highest stable settings using air-based and liquid-based cooling through the Poseidon GTX 780's integrated DirectCU H2O cooler. For details on the overclocked settings used for testing and benchmarks, please see the Manual Overclocking section below. 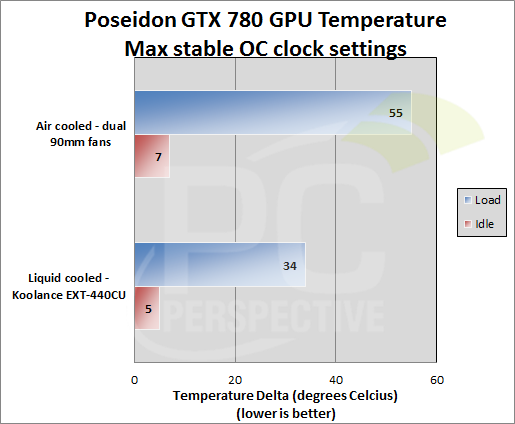 At overclocked speeds, the temperature difference between air and liquid cooling of the card remains constant in comparison to the measured stock performance. Under load, the liquid cooled card averages 21C cooler than air cooled. This becomes more respectable in light of the increased performance potential unlocked with the card using liquid cooling.

Using water-based cooling on a graphics card has a direct effect on the operating temperature of the cooled components because of the coolant's more efficient heat absorption properties in comparison with air-based heat dissipation. The lower operating temperature of the graphic card's components indirectly effects the card overclocking potential, allowing the card to attain faster performance because of the liquid coolant's more efficient heat dissipation. For testing the Poseidon GTX 780's DirectCU H2O cooler and its impact on the card's performance, overclocking threshold testing was performed with the card operating in air-cooled only mode and in liquid-cooled mode.

For both overclocking tests, ASUS' GPU Tweak software (v2.5.4.2) was used to enable the settings with TechPowerUp GPU-Z (v0.7.7) used to validate the settings properly took effect. Graphics card stability was tested by performing a full run through the Unigine Heaven benchmark at maximum settings and 1920×1080 resolution without crash or artifacting. Once the Heaven benchmark run stabilized, card stability was checked using the Grid 2 and Metro: Last Light in-game benchmark tests. The settings were further refined until no artifacting or crashes occurred in any of those applications. To further ensure card operational reliability at the configured settings, the card was torture tested over an extended period with FurMark running at 1280×1024 resolution and 8x MSAA in Burn-in Test mode. 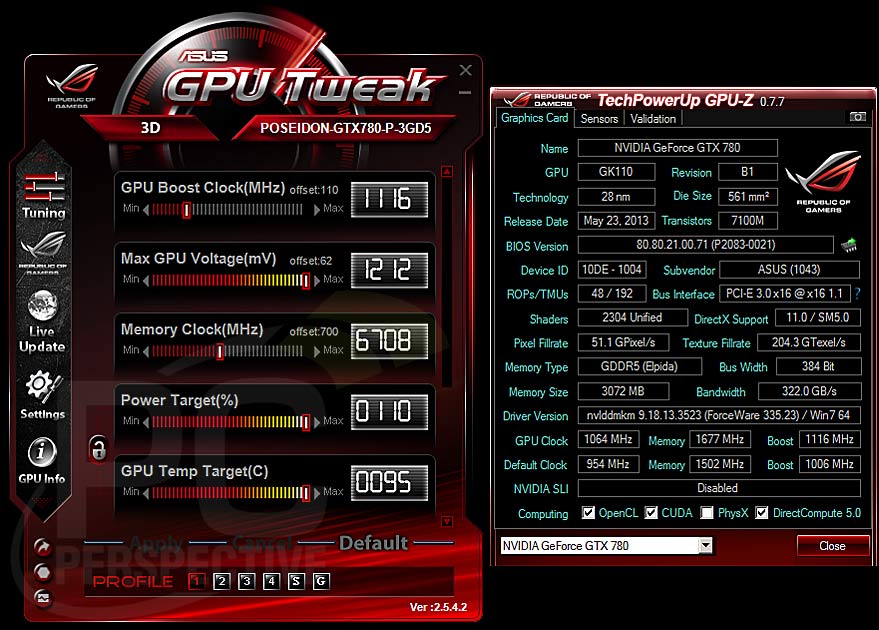 With the integration of the card into an isolated liquid cooled loop using a Koolance EXT-440CU unit, we were able to increase the GPU boost clock and memory speeds to 1161 MHz (+155) and 6858 MHz (+850). By simply adding active coolant flow to the block, we were not only able to significantly lower temperatures, but increased the overclocking potential of the card by an incremental increase of 40% on the GPU boost clock and 20% on the GPU memory speed. 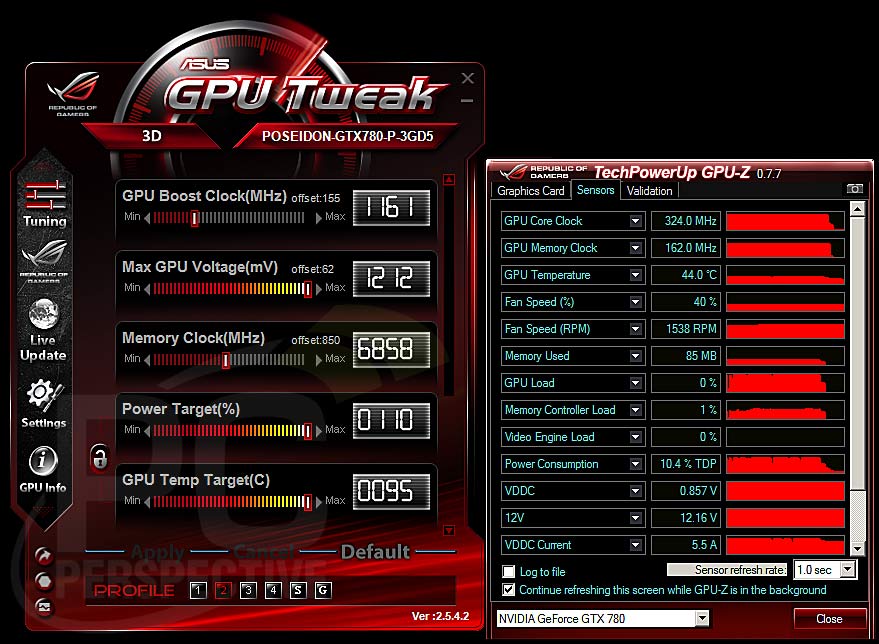 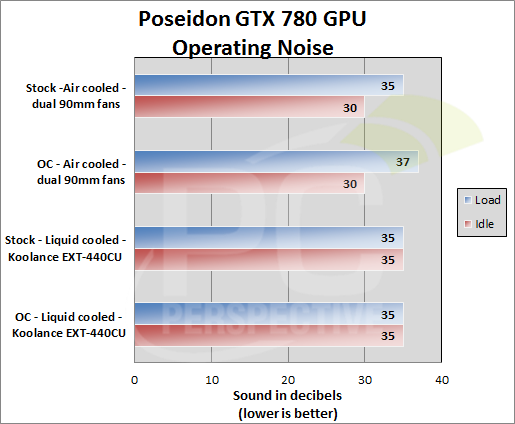 This is not something you hear very often in relation to video card fan noise – sound is not an issue with the Poseidon GTX 670. ASUS' DirectCU H2O cooler is so efficient at wicking the heat from the GPU die and memory that the fan operating noise of the unit remains inaudible over the normal case fan noise with air-only operation under overclocked conditions. And that is with the dual 90mm fans going at over 60% speed with card temperatures approaching 80C.