Its been a while…

EVGA’s GTX 780 doesn’t break the bank, but packs a punch!

EVGA has been around for quite some time now.  They have turned into NVIDIA’s closest North American partner after the collapse of the original VisionTek.  At nearly every trade show or gaming event, EVGA is closely associated with whatever NVIDIA presence is there.  In the past EVGA focused primarily on using NVIDIA reference designs for PCB and cooling, and would branch out now and then with custom or semi-custom watercooling solutions.

A very svelte and minimalist design for the shroud.  I like it.

The last time I actually reviewed an EVGA products was way back in May of 2006.  I took a look at the 7600 GS product, which was a passively cooled card.  Oddly enough, that card is sitting right in front of me as I write this.  Unfortunately, that particular card has a set of blown caps on it and no longer works.  Considering that the card has been in constant use since 2006, I would say that it held up very well for those eight years!

EVGA has been expanding their product lineup to be able to handle the highs and lows of the PC market.  They have started manufacturing motherboards, cases, and power supplies to help differentiate their product lineup and hopefully broaden their product portfolio.  We know from past experiences that companies that rely on one type of product from a single manufacturer (GPUs in this particular case) can experience some real issues if demand drops dramatically due to competitive disadvantages.  EVGA also has taken a much more aggressive approach to differentiating their products while keeping them within a certain budget.

The latest generation of GTX 700 based cards have seen the introduction of the EVGA ACX cooling solutions.  These dual fan coolers are a big step up from the reference design and puts EVGA on par with competitive products from Asus and MSI.  EVGA does make some tradeoffs as compared, but these are fairly minimal when considering the entire package.

EVGA was kind enough to ship me the GTX 780 Dual w/ACX.  This particular card is an interesting mix of reference design and unique features.  Typically EVGA relies upon the reference PCB design when it comes to power phases and routing, but they do some interesting tweaks here and there.

The board is based on the NVIDIA GTX 780 which features 2304 CUDA Cores running at a base clock of 863 MHz with a boost clock of 902 MHz.  The board has 3 GB of memory on a 384 bit bus running at 6008 MHz effective, giving around 288.38 GB/sec of bandwidth.  The chip encompasses 48 ROPS and 192 texture units to boot.  This is still a large and very powerful chip, even though the general purpose performance has been nerfed as compared to the GTX Titan which shares the same GK110 GPU. 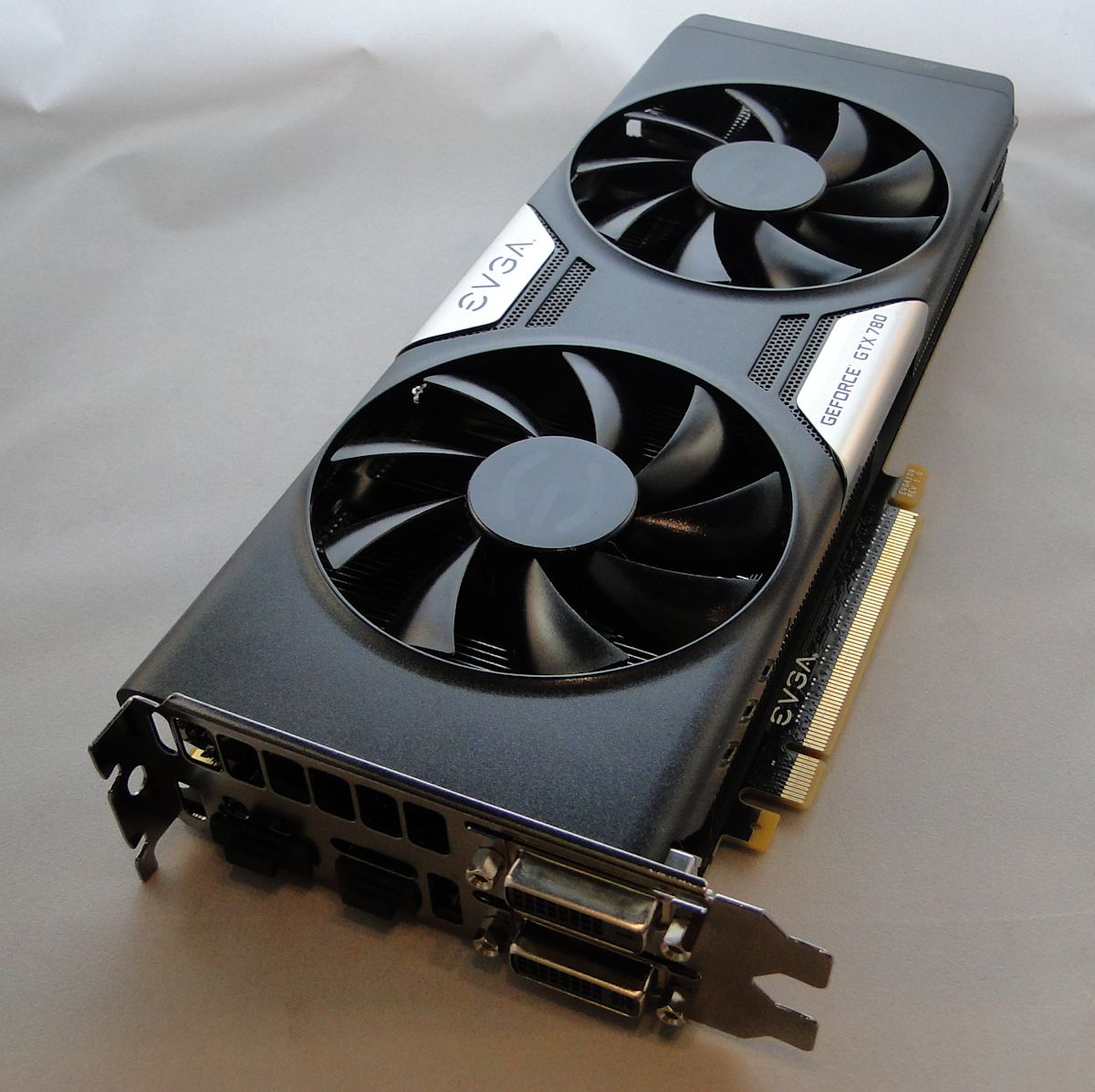 Dual link DVI outputs are standard, and the rest of the ports are well represented.  The GTX 700 series can support 3+1 surround.

This card is not overclocked out of the box.  The pack-ins for this card are actually a step above the offerings of most other manufacturers.  It features a single DVI to VGA adapter, two dual-4 pin molex power to 6 pin PCI-E plugs, some case stickers, installation CD, manuals, and a rather interesting poster.  The packaging itself is the usual EVGA design.  The plastic clamshell protects the card very well while providing a lot of support for the external box.  A lot of force would be needed to harm the card inside of this particular arrangement.  The transparent plastic also allows EVGA to place a small window in the back of the box to allow users to see the product tag and serial number, so they know exactly what they are getting.

The “Dual” in the name refers to the dual bios support.  There are two dip switches on the back of the card which control which BIOS is booted when the card is powered up.  The primary BIOS is the stock unit, but the secondary is built for more aggressive overclocking.  This means increased fan speeds and a higher power target.  This likely will not push it as far as other, more focused options (like the MSI Lightning series with LN2 BIOS support), but it will give some extra headroom.

The top of the card hints at the many aluminum fins that comprises the heatsink in the ACX cooler.

The dual BIOS might be a giveaway that this is not based on a fully reference PCB design.  After comparing boards with a reference GTX 780, the EVGA product does differ significantly.  I do not know if they have added extra power phases to either the GPU or memory, but the design looks to be unique to EVGA.  This is often done for either performance or cost reasons, but from what I am seeing it looks like it leans more towards the performance side. 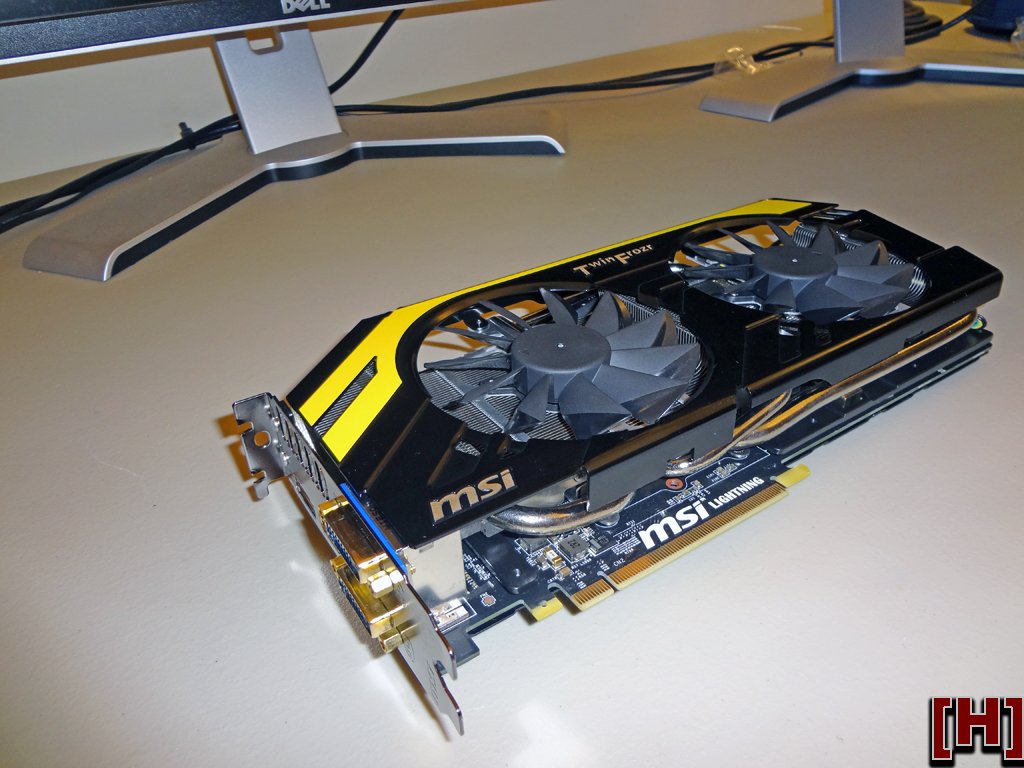