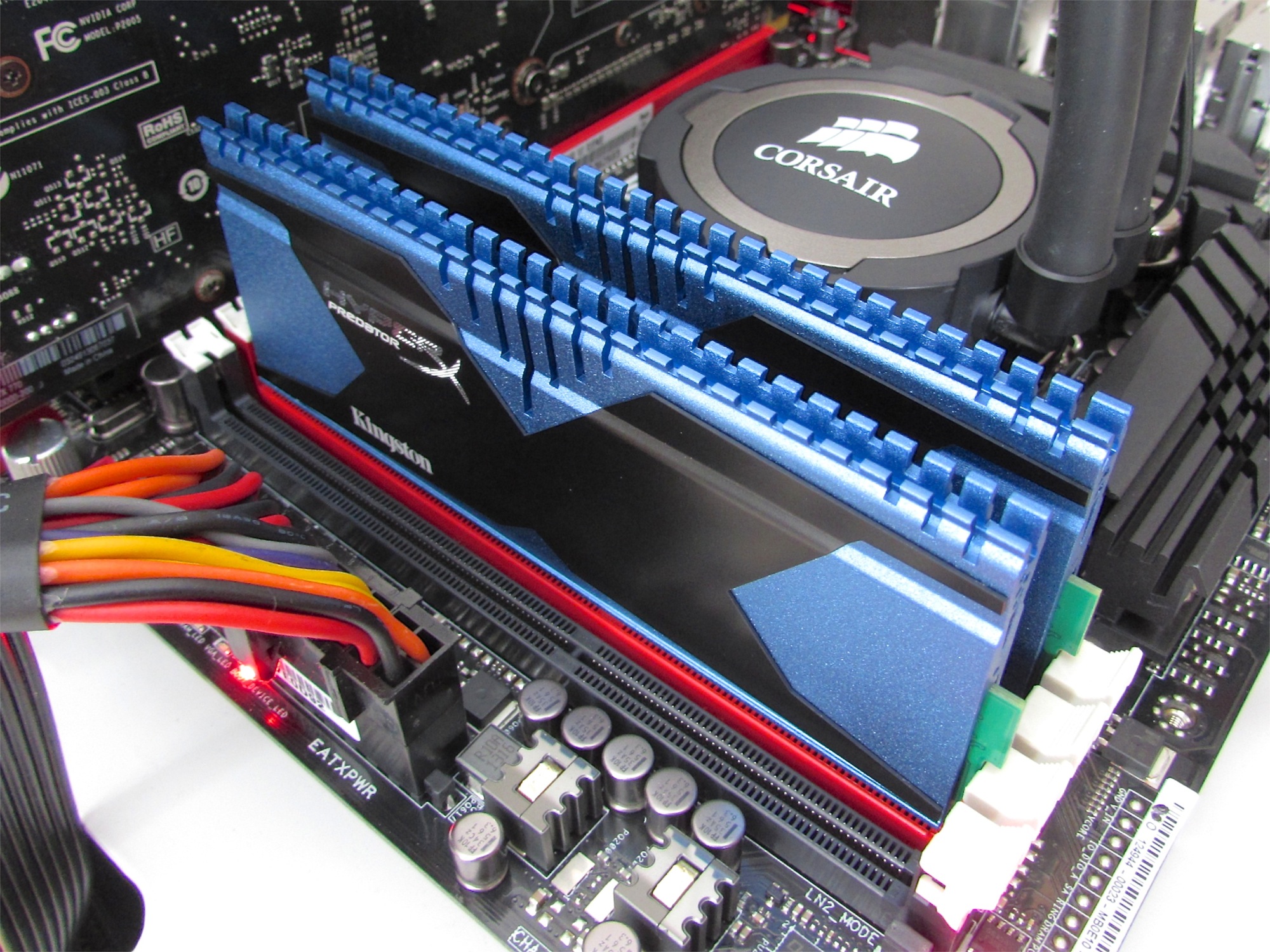 So Many MHz, So Little Time…

If you've looked at memory for your system lately you've likely noticed a couple of things. First, memory prices have held steady for the past few months, but are still nearly double what they were a little over a year ago. Second, now that DDR3 has been a mature standard for years, there is a vast selection of RAM from many vendors, all with nearly identical specs. The standard has settled at 1600MHz for DDR3, and most desktop memory is programmed for this speed. Granted, many modules run at overclocked speeds, and there are some out there with pretty outlandish numbers, too – and it’s one of those kits that we take a look at today.

Hardly subtle, the Kingston HyperX 'Predator' dual channel kit for review today is clocked at a ridiculous 1066MHz OVER the 1600MHz standard. That's right, this is 2666MHz memory! It seems like such a big jump would have to provide increased system performance across the board, and that's exactly what we're going to find out.

We all want to get the most out of any component, and finding the best option at a given price is part of planning any new build or upgrade. While every core part is sold at a particular speed, and most can be overclocked, there are still some qualifying factors that make selecting the fastest part for your budget a little more complicated. Speed isn't based on MHz alone – as with processors, where it often comes down to number of cores, how many instructions per clock cycle a given CPU can churn out, etc.

When looking at DDR3 memory, and the often very slight differences between latency timings at a given speed, it's far more impressive to see a big MHz number. But does it really help? Unlike processors, there is only one DDR3 standard. It’s as if AMD or Intel just made one processor each, and released it under different names depending on how fast it could run (OK, so maybe that actually happens sometimes). Some memory chips just run faster than others – when tested by the manufacturer in a process called “binning” – and it’s these chips that can end up in parts guaranteed to run at much higher speeds.

Enthusiasts often push components past their recommended limits. In fact, overclocking has grown into a marketable industry with unlocked processors, graphics cards that advertise higher core speeds and voltage tweaks, and memory with special overclocking profiles programmed right in – and there is even an overclocked SSD drive on the market now! Any number of stock components might optionally be overclocked for a free performance gain, and within safe voltage levels many components will run faster, and do so reliably if sufficiently cooled. But there is a sharp distinction between these stock components and those marketed specifically as ‘overclocking’ parts – and the retail prices of these specialty products are often much higher, of course.

In the case of enthusiast memory, the higher cost is due largely to the processes that must occur before the manufacturer is willing to guarantee that the chips will work at a particular speed/latency/voltage. So is it worth the added cost? It comes down to the individual. There is the convenience factor to consider, since the screening processes employed by these manufacturers serve to eliminate a lot of the variation normally encountered when attempting to overclock a stock DIMM. It’s unlikely that generic memory could be overclocked to 2600MHz+ (and at just 1.65V), and in the case of this Kingston memory the IC’s on the module have been tested to operate reliably at the rated speed – according to the manufacturer, of course.

Kingston has historically been a familiar name in the enthusiast community, and their HyperX line of performance desktop memory has been present on the market since 2002. While in recent years the popularity of overclocking memory from the likes of G.Skill, Corsair, and others has pushed Kingston off the first pages of the product lists on PC component sites, there are still dedicated lines of performance RAM from Kingston to cater to the needs of the overclocking inclined. 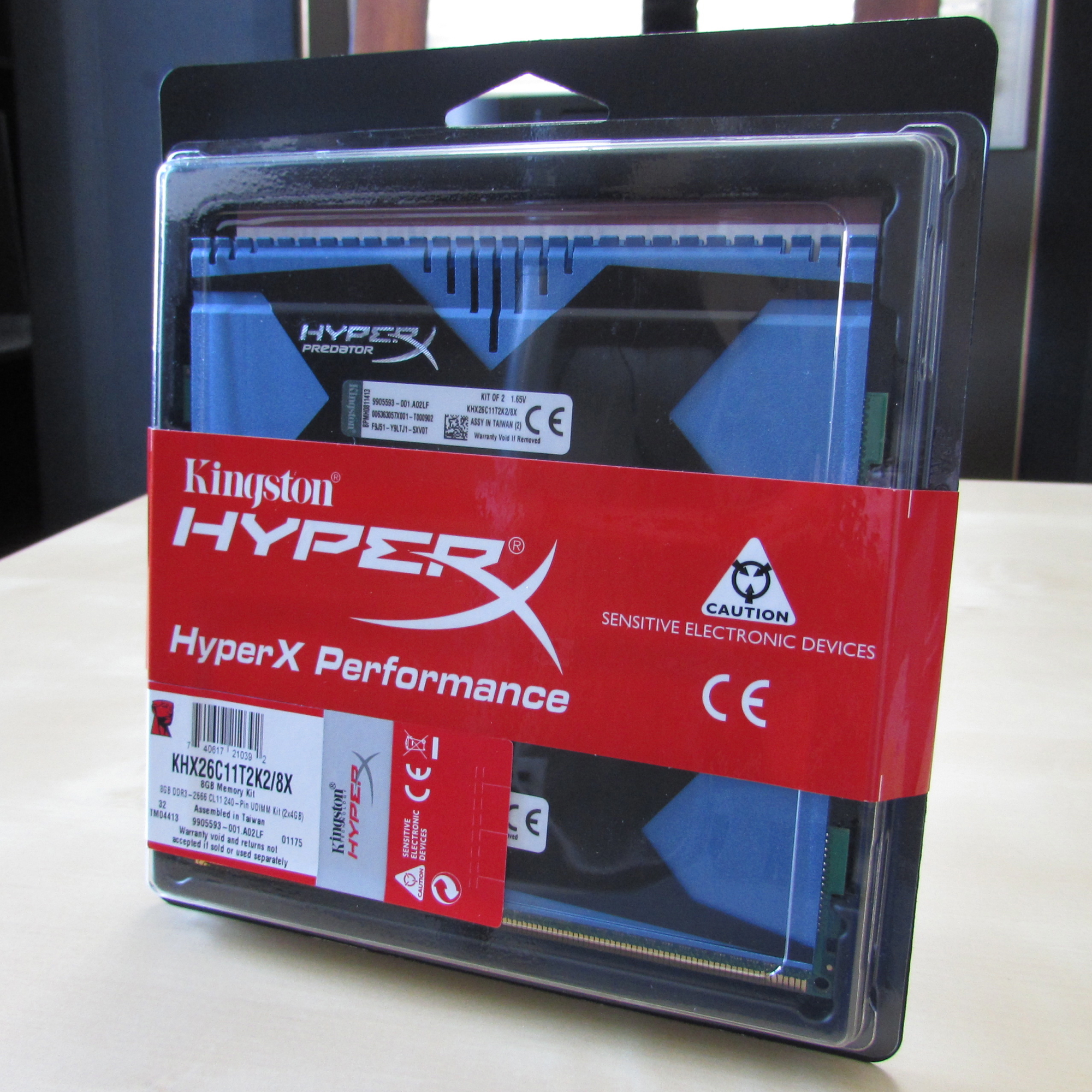 Far beyond Kingston’s numerous commodity memory offerings, the more recent of the HyperX series parts have been rated for some very impressive speeds out of the box. Though it was introduced in mid-2012, the 2666MHz model of the HyperX ‘Predator’ is still among the higher-clocked RAM available today, and Kingston has rated these modules to run at 2666MHz with the timings set to 11-13-13-35 at 1.65V. At the time of this review this 8GB dual-channel kit was selling for $94.99 on Amazon, which is actually fairly competitive for an 8GB kit right now. The lowest price for any 8GB dual-channel 1866MHz memory on Newegg was $84.99 (a G.Skill Ripjaws X kit). So for exactly $10 more than the cheapest 1866MHz RAM, you can buy a kit capable of 800MHz higher speeds right now. Sounds pretty good! 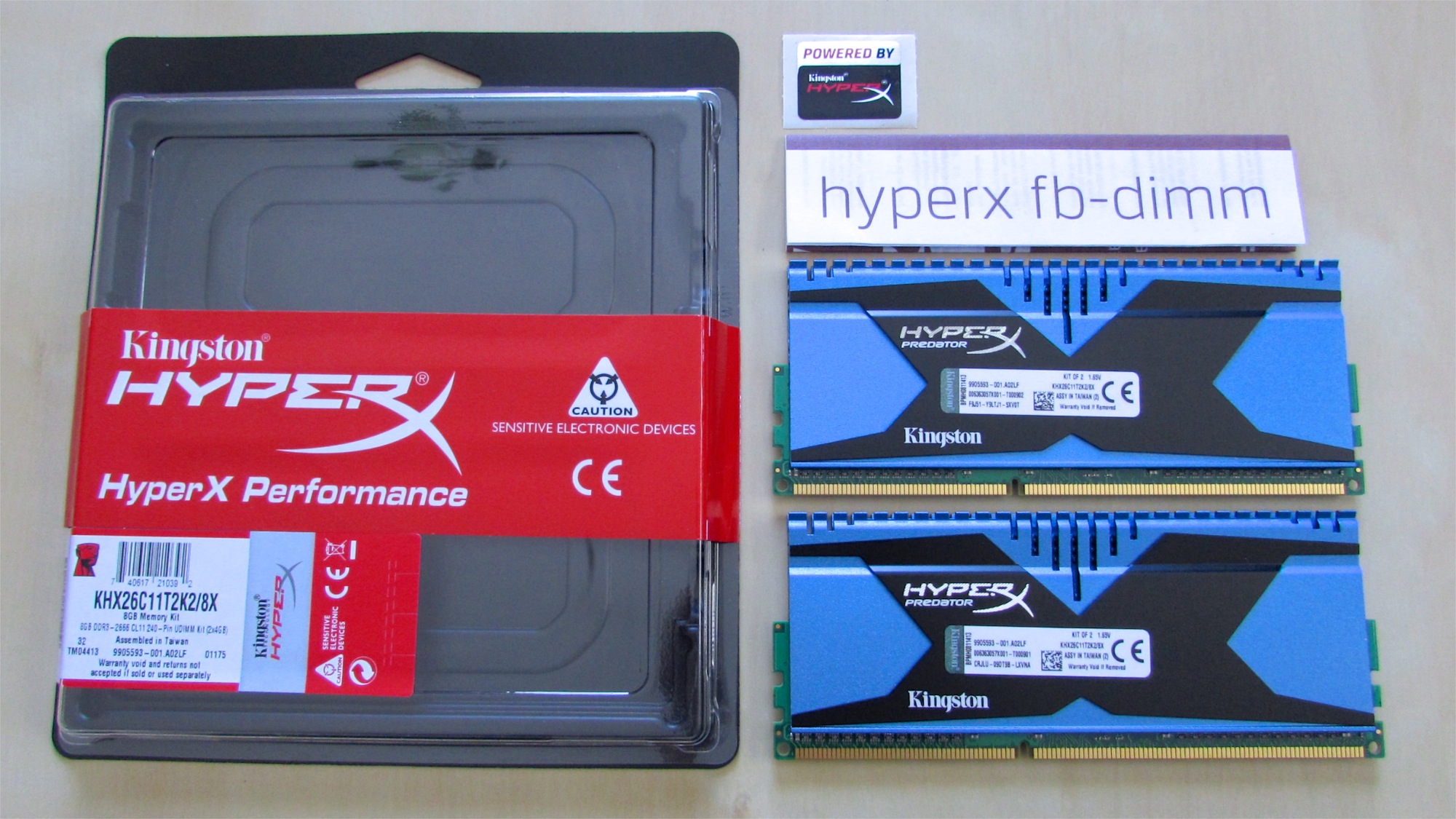 The kit is minimally packaged in a standard tray, with a case sticker and the warranty booklet the only other contents. The first impression I had of these modules as I removed them from the package was of their sheer size and weight. These DIMMs are, in a word, massive. The heat spreaders feel very substantial, and are very tall. 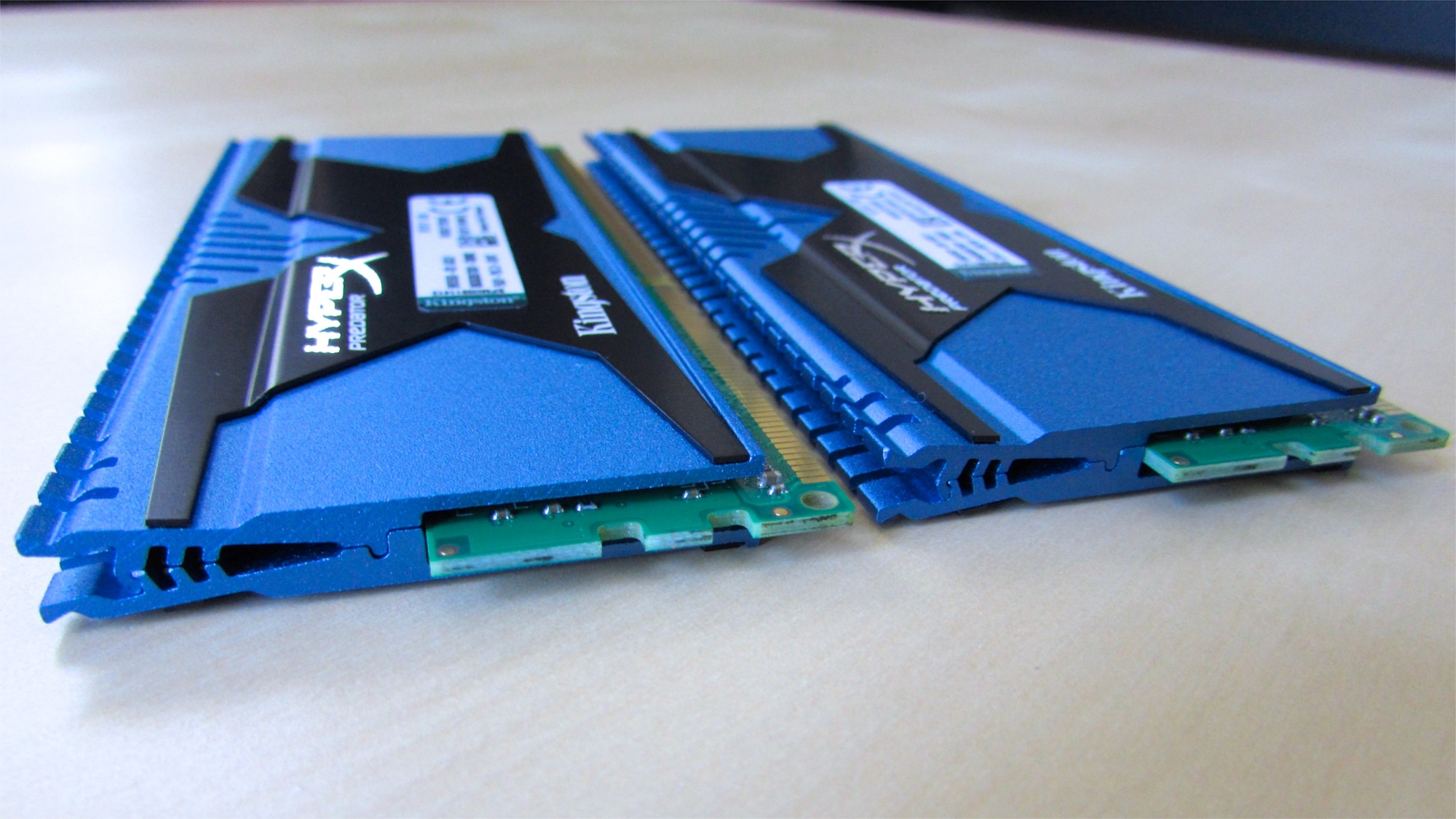 These weigh 3.1oz (86 grams) each, and to give you an idea of how heavy this is, a generic DDR3 DIMM weighed in at just 0.6oz (15 grams)! Yep, these heat spreaders are heavy! And, with a height of 2 ⅛”, they will clearly be an issue for many air coolers. On the plus side, they shouldn’t interfere with the ever-popular AIO coolers on the market, such as the Corsair H75 currently installed in the test system. 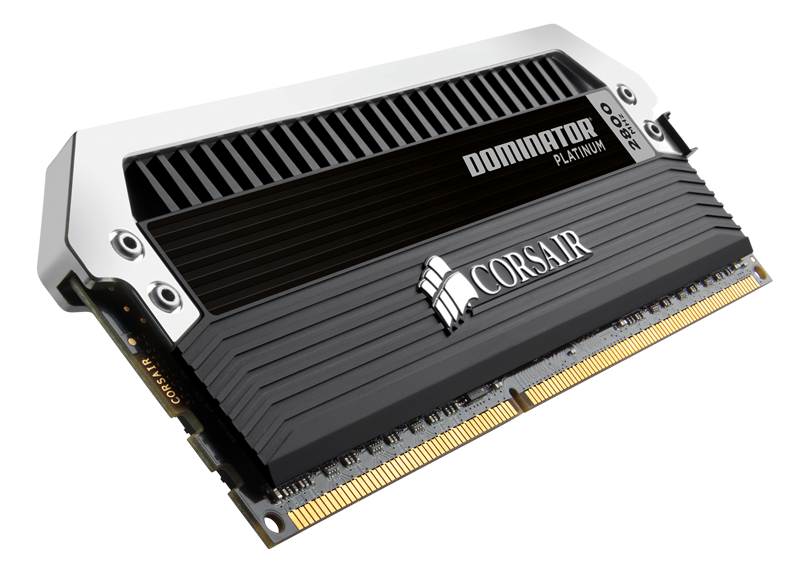 Stuff your stocking with silicon