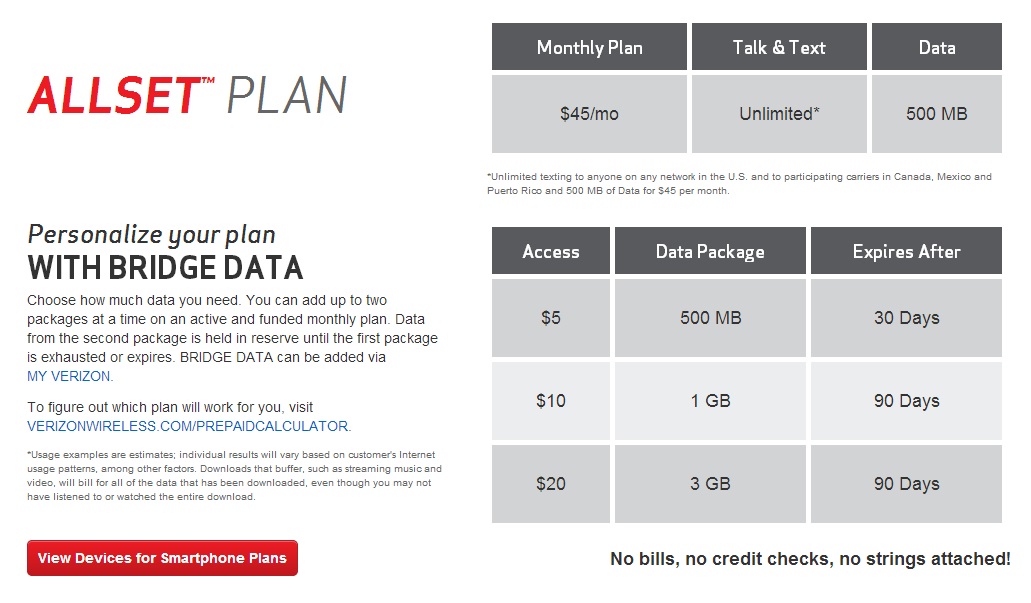 Verizon has taken the wraps off of a new pre-paid cell phone plan called “ALLSET.” The plans offer unlimited calling, unlimited texting, and 500MB of base data for $35/month for feature phones and $45 a month for smartphones. At first glance, they are pretty standard fare, and not the cheapest pre-paid option either. However, Verizon has added a bit of a twist to the pre-paid equation by allowing ALLSET users to add “Bridge Data” on top of the base plan’s 500MB cap that can be rolled over to future months if not used right away.

The ALLSET plans come with a 500MB (or 1GB if enrolled in Auto Pay) of cellular data each month that cannot be saved. From there, users can purchase up to two data packages that can be saved or rolled over to future months if not used right away. The Bridge Data packs work out to $5 for 500MB, $10 for 1GB, or $20 for 3GB. Users can save the $5 (500MB) pack for a month while the $10 (1GB) and $20 (3GB) packs can be saved or have the remaining bits rolled over for up to three months after purchase. The base data is used first, after which the first package is used completely before dipping into the second package (if purchased at all), which is important to consider in relation to the expiration dates.

In another bit of good news for ALLSET users, Verizon allows the mobile hotspot feature which is extremely rare for the cellphone industry (without charging an additional fee).

The system is not perfect due to the short expiration dates (at most 90 days) for rollover and the fact that base data cannot be saved (only the additional bridge data packs), but it is definitely a step in the right direction and a feature I have been wanting to see for years now. Hopefully this encourages other providers to consider rollover data plans, and the competition forces relaxed restrictions on the expiry of rollover data.