While we are still waiting for those mysterious Intel Bay Trail based Android tablets to find their way into our hands, we met with ARM today to discuss quite few varying topics. One of them centered around the cost of binary translation – the requirement to convert application code compiled for one architecture and running it after conversion on a different architecture. In this case, running native ARMv7 Android applications on an x86 platform like Bay Trail from Intel.

Based on results presented by ARM, so take everything here in that light, more than 50% of the top 250 applications in the Android Play Store require binary translation to run. 23-30% have been compiled to x86 natively, 20-21% run through Dalvik and the rest have more severe compatibility concerns. That paints a picture of the current state of Android apps and the environment in which Intel is working while attempting to release Android tablets this spring.

Performance of these binary translated applications will be lower than they would be natively, as you would expect, but to what degree? These results, again gathered by ARM, show a 20-40% performance drop in games like Riptide GP2 and Minecraft while also increasing "jank" – a measure of smoothness and stutter found with variances in frame rates. These are applications that exist in a native mode but were tricked into running through binary conversion as well. The insinuation is that we can now forecast what the performance penalty is for applications that don't have a natively compiled version and are forced to run in translation mode. 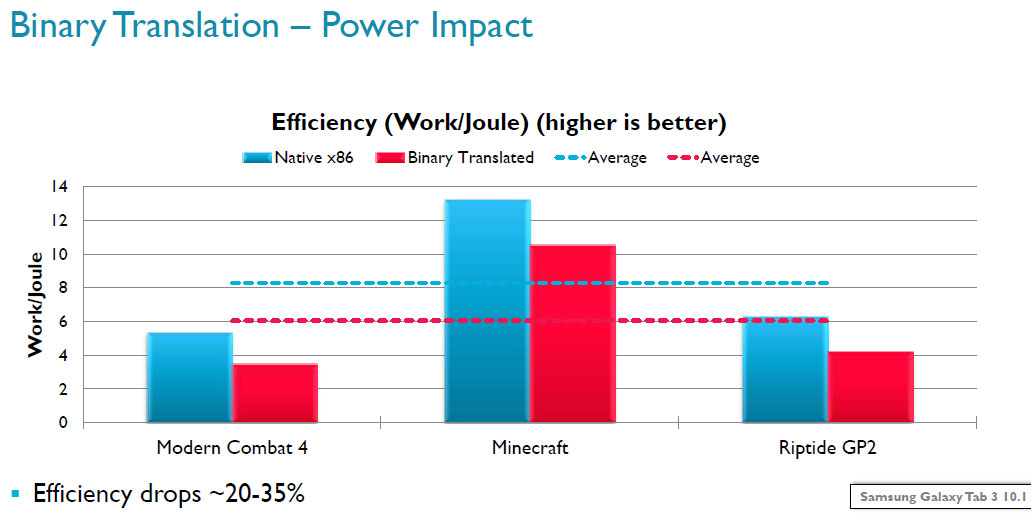 The result of this is lower battery life as it requires the CPU to draw more power to keep the experience close to nominal. While gaming on battery, which most people do with items like the Galaxy Tab 3 used for testing, a 20-35% decrease in game time will hurt Intel's ability to stand up to the best ARM designs on the market.

Other downsides to this binary translation include longer load times for applications, lower frame rates and longer execution time. Of course, the Galaxy Tab 3 10.1 is based on Intel's Atom Z2560 SoC, a somewhat older Clover Trail+ design. That is the most modern currently available Android platform from Intel as we are still awaiting Bay Trail units. This also explains why ARM did not do any direct performance comparisons to any devices from its partners. All of these results were comparing Intel in its two execution modes: native and translated.

Without a platform based on Bay Trail to look at and test, we of course have to use the results that ARM presented as a placeholder at best. It is possible that Intel's performance is high enough with Silvermont that it makes up for these binary translation headaches for as long as necessary to see x86 more ubiquitous. And in fairness, we have seen many demonstrations from Intel directly that show the advantage of performance and power efficiency going in the other direction – in Intel's favor. This kind of debate requires some more in-person analysis with hardware in our hands soon and with a larger collection of popular applications.

More from our visit with ARM soon!