AMD has been taking PC gaming very seriously, especially over the last couple of years. While they have a dominant presence in the console space, with only IBM in opposition, I believe that direct licensing revenue was not their main goal, rather that they hope to see benefits carry over to the PC and maybe mobile spaces, eventually. In the PC space, Never Settle launched as a very successful marketing campaign. While it had a stutter with the launch of the R9 (and R7) product lines, it is back and is still called, "Never Settle Forever".

Keeping with Forever's alteration to the Never Settle formula, the type of card that you purchase yields a Gold, Silver, or Bronze reward. Gold (the R9 280 and R9 290 series, and the R9 295X2) gets three free games in the Gold tier, Silver (R9 270 and R7 260 series) gets two in the Silver tier, and Bronze (R7 250 and R7 240 series) gets one free game in the Bronze tier. By and large, the tiers are the same as last time plus a few old games and one upcoming Square Enix release: Murdered: Soul Suspect. They have also made deals with certain independent developers, where two indie titles bundled together count as one choice.

The complete breakdown of games is as follows:

Oddly enough, there does not seem to be a Banner Saga + Guacamelee combo...

... the only impossible combination.

AMD has also announced that Never Settle will continue for more "additions" in 2014. Which ones? Who knows. It is clear that they have a great working relationship with Square Enix Europe, including basically their last six major titles in Never Settle and keeping them there, but there is not really anything from them on the horizon (at least, not announced). AMD does sound confident in having other deals lined up this year, however. 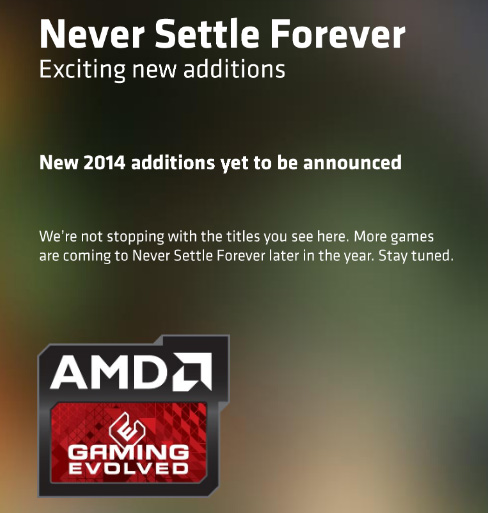 Never Settle Forever graphics cards are available now "at participating retailers". Bundle codes can be redeemed any time between now and August 31st.

There is some regional variance in game availability, however. Read up before you purchase (especially if you live in Japan). You should be fine if you live in North America, Europe, Middle East, Africa, New Zealand, Australia, and Latin America, though, at least where AMD products are available. Still, it is a good idea to check.