NVIDIA’s 337.50 driver has caused quite the stir. Is it worth it though?

Let's see if I can start this story without sounding too much like a broken record when compared to the news post I wrote late last week on the subject of NVIDIA's new 337.50 driver. In March, while attending the Game Developer's Conference to learn about the upcoming DirectX 12 API, I sat down with NVIDIA to talk about changes coming to its graphics driver that would affect current users with shipping DX9, DX10 and DX11 games.

As I wrote then:

What NVIDIA did want to focus on with us was the significant improvements that have been made on the efficiency and performance of DirectX 11.  When NVIDIA is questioned as to why they didn’t create their Mantle-like API if Microsoft was dragging its feet, they point to the vast improvements possible and made with existing APIs like DX11 and OpenGL. The idea is that rather than spend resources on creating a completely new API that needs to be integrated in a totally unique engine port (see Frostbite, CryEngine, etc.) NVIDIA has instead improved the performance, scaling, and predictability of DirectX 11.

NVIDIA claims that these fixes are not game specific and will improve performance and efficiency for a lot of GeForce users. Even if that is the case, we will only really see these improvements surface in titles that have addressable CPU limits or very low end hardware, similar to how Mantle works today.

In truth, this is something that both NVIDIA and AMD have likely been doing all along but NVIDIA has renewed purpose with the pressure that AMD's Mantle has placed on them, at least from a marketing and PR point of view. It turns out that the driver that starts to implement all of these efficiency changes is the recent 337.50 release and on Friday I wrote up a short story that tested a particularly good example of the performance changes, Total War: Rome II, with a promise to follow up this week with additional hardware and games. (As it turns out, results from Rome II are…an interesting story. More on that on the next page.) 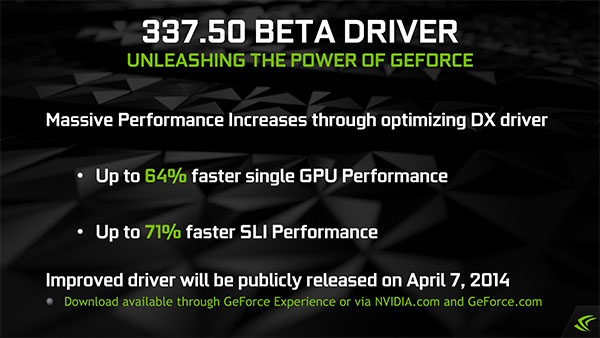 Today I will be looking at seemingly random collection of gaming titles, running on some reconfigured test bed we had in the office in an attempt to get some idea of the overall robustness of the 337.50 driver and its advantages over the 335.23 release that came before it. Does NVIDIA have solid ground to stand on when it comes to the capabilities of current APIs over what AMD is offering today?

In an ideal world, we would have a dozen editors that are able to run an assortment of hardware and software tests on these two drivers (335.23 and 337.50) to give you 100% of the available data. I do not have those editors, and instead relied on me and my weekend to gather the data you see here. I have included graphics cards that range from the extreme enthusiast level (GTX 780 Ti) to the high-end (GTX 770) and even mainstream (GTX 750 Ti). Most tests were run on a Core i7-3960X Sandy Bridge-E platform though I did run a handful on the Core i7-4770K + Z87 platform with the GTX 780 Ti cards in SLI for sanity.

The games used are also somewhat varied as I attempted to find cases where the NVIDIA 337.50 driver excelled while also giving the other side of the story with games that see little to no benefit to the changes. Tested titles include Batman: Arkham Origins, Battlefield 4, Crysis 3, Hitman: Absolution, Bioshock Infinite, Borderlands 2, Sniper Elite V2, Call of Duty: Ghosts, Sleeping Dogs, Metro: Last Light and GRID 2. Not every game was tested with every hardware configuration, but we'll explain as we go.

Our first page of results is going to focus on multi-GPU performance between the two drivers, starting with the GeForce GTX 780 Ti on the Core i7-3960X + X79 platform.

With the high-end processor and graphics card combination, the biggest performance gains were seen with Hitman: Absolution and Batman: Arkham Origins. 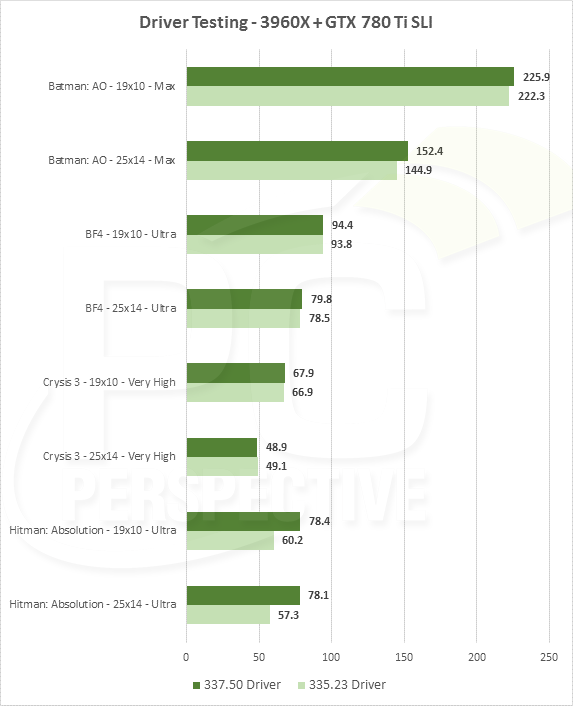 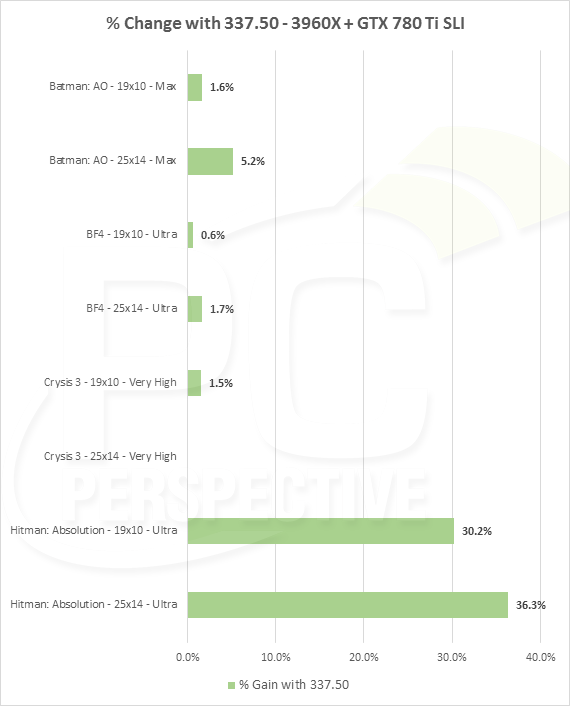 Next, we took the same GPU configuration and plugged it into a different platform, this time based on the Core i7-4770K. Call of Duty: Ghosts scores increased by a significant amount, hitting 21% at 1920×1080 on the Max preset and with 4xMSAA enabled. 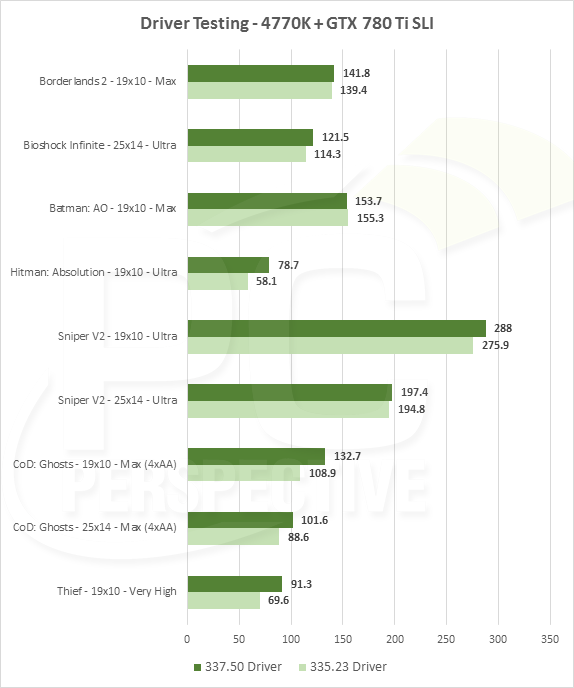 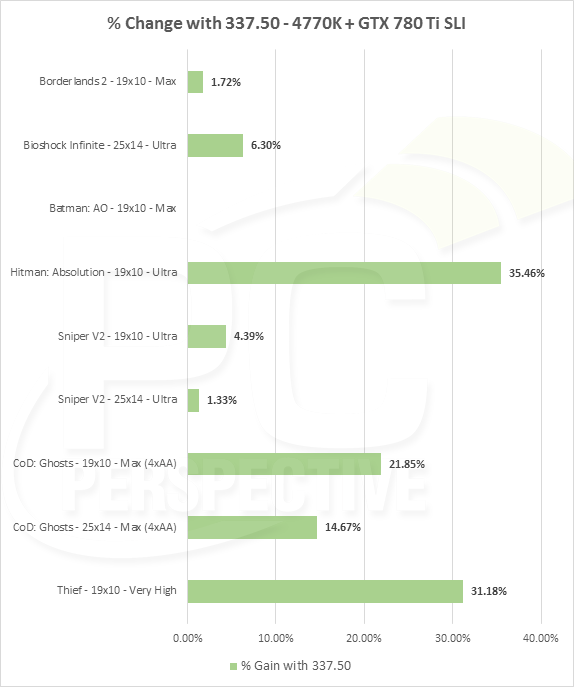 Even Thief, a game that AMD has been using to help promote Mantle, sees a sizeable performance gain in SLI with a pair of GTX 780 Ti cards at 1920×1080 on the Very High preset. A scaling rate of 31% is close to the performance gains we have seen with AMD's Mantle API on its Radeon graphics cards, but NVIDIA was able to do this inside the existing DX11 API.

Our third set of SLI results moves back to the Core i7-3960X platform but replaces the GeForce GTX 780 Ti cards with GeForce GTX 770 models. 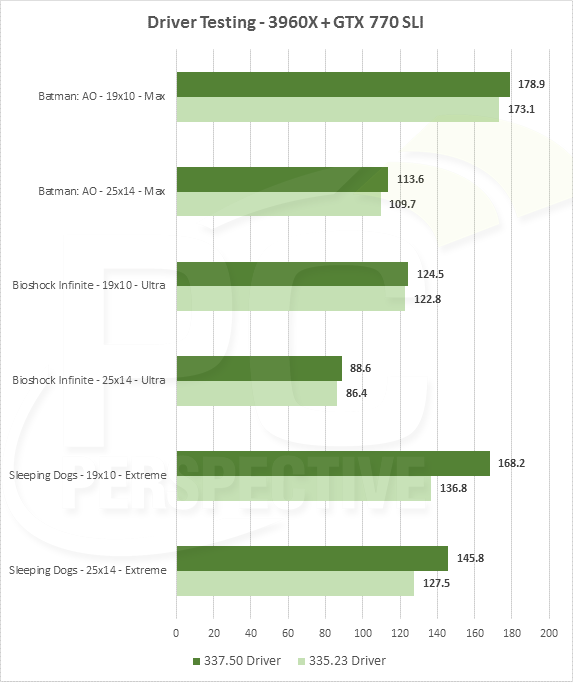 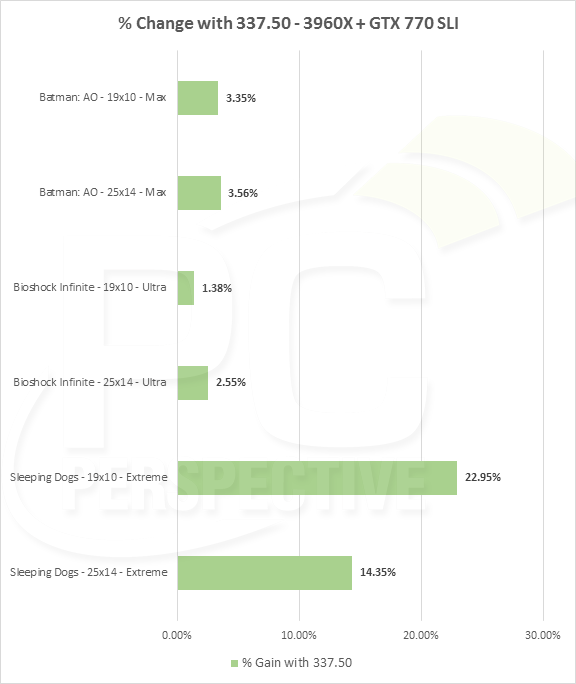 These cards retail for close to $330, compared to the $699 of the flagship offerings, which should give us a better look at configurations that more of our readers likely have in their PCs.

This time the biggest scaling is seen with Sleeping Dogs, an older DX11 title that still impresses visually. Improvements over 22% at 1920×1080 and 14% at 2560×1440 are definitely worthwhile performance advantages for a single driver release and indicate there is some magic under the hood of 337.50. Batman: Arkham Origins scales by about 3.5% at both 1080p and 25×14, not nearly as big of an improvement but it is something.

On the next page we'll take a look at a couple of single GPU configurations and compare 337.50 and 335.23 driver results. 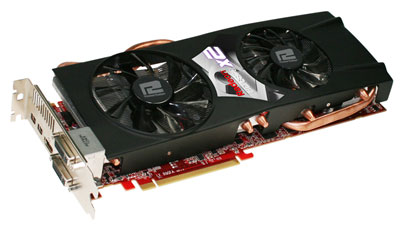 Double the price but not double the performance; Powercolor designed a dual GPU HD 6870