AMD has done the impossible and put a pair of Hawaii GPUs on a single PCB to create the most powerful video card we have ever tested.

AMD likes to toot its own horn. Just a take a look at the not-so-subtle marketing buildup to the Radeon R9 295X2 dual-Hawaii graphics card, released today. I had photos of me shipped to…me…overnight. My hotel room at GDC was also given a package which included a pair of small Pringles cans (chips) and a bottle of volcanic water. You may have also seen some photos posted of a mysterious briefcase with its side stickered by with the silhouette of a Radeon add-in board.

This tooting is not without some validity though. The Radeon R9 295X2 is easily the fastest graphics card we have ever tested and that says a lot based on the last 24 months of hardware releases. It’s big, it comes with an integrated water cooler, and it requires some pretty damn specific power supply specifications. But AMD did not compromise on the R9 295X2 and, for that, I am sure that many enthusiasts will be elated. Get your wallets ready, though, this puppy will run you $1499. 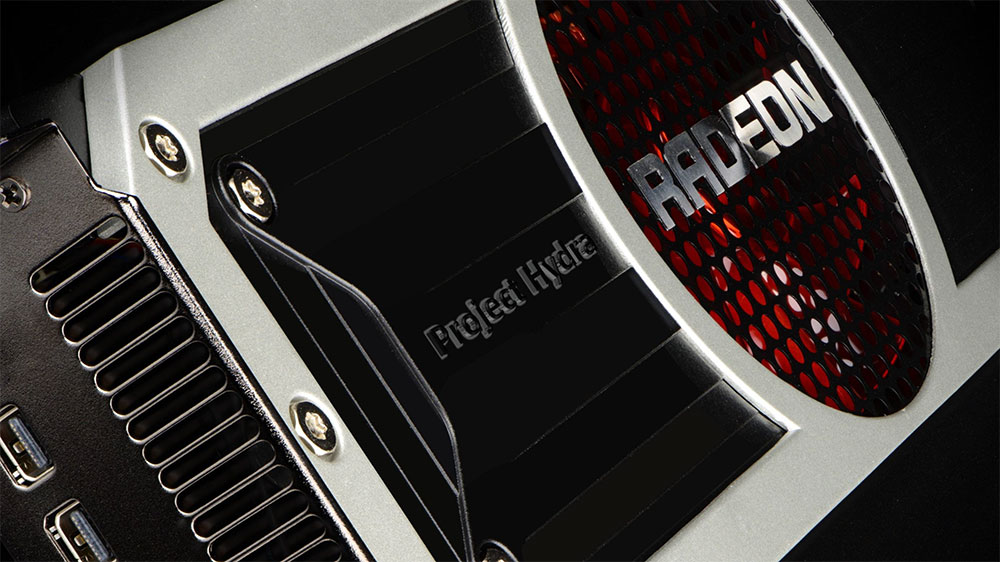 Both AMD and NVIDIA have a history of producing high quality dual-GPU graphics cards late in the product life cycle. The most recent entry from AMD was the Radeon HD 7990, a pair of Tahiti GPUs on a single PCB with a triple fan cooler. While a solid performing card, the product was released in a time when AMD CrossFire technology was well behind the curve and, as a result, real-world performance suffered considerably. By the time the drivers and ecosystem were fixed, the HD 7990 was more or less on the way out. It was also notorious for some intermittent, but severe, overheating issues, documented by Tom’s Hardware in one of the most harshly titled articles I’ve ever read. (Hey, Game of Thrones started again this week!)

The Hawaii GPU, first revealed back in September and selling today under the guise of the R9 290X and R9 290 products, is even more power hungry than Tahiti. Many in the industry doubted that AMD would ever release a dual-GPU product based on Hawaii as the power and thermal requirements would be just too high. AMD has worked around many of these issues with a custom water cooler and placing specific power supply requirements on buyers. Still, all without compromising on performance. This is the real McCoy. 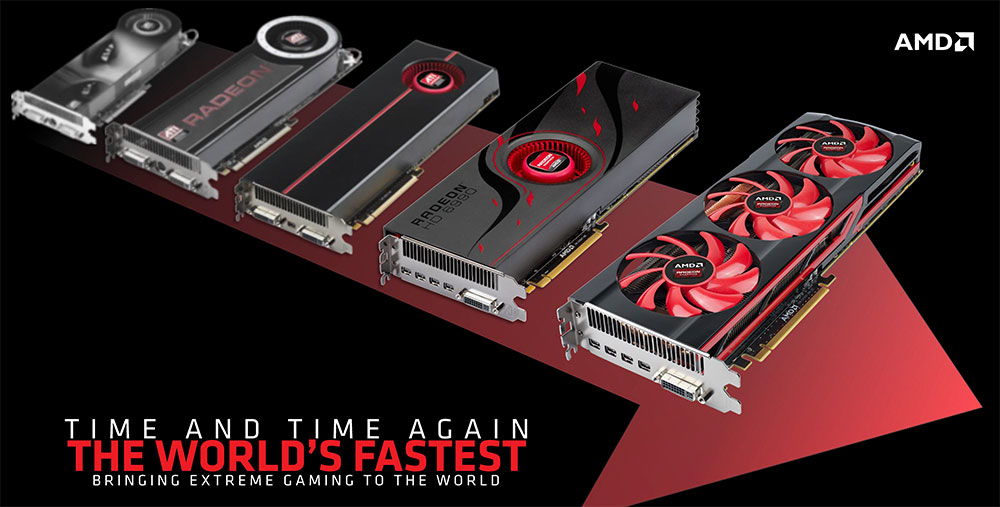 At the heart of the AMD Radeon R9 295X2 is a pair of full specification Hawaii GPUs. These are not neutered in any way. Each chip includes the same shader count as an R9 290X. With its two gpus, this card pushes 5,632 shaders to a theoretical peak performance of 11.5 TFLOPs. A combined 12.4 billion transistors is quite impressive.

Each GPU has access to 4GB of GDDR5 memory and are connected to a 512-bit memory bus running at 5.0 GHz; again, this is the same clock rate as the single GPU card. 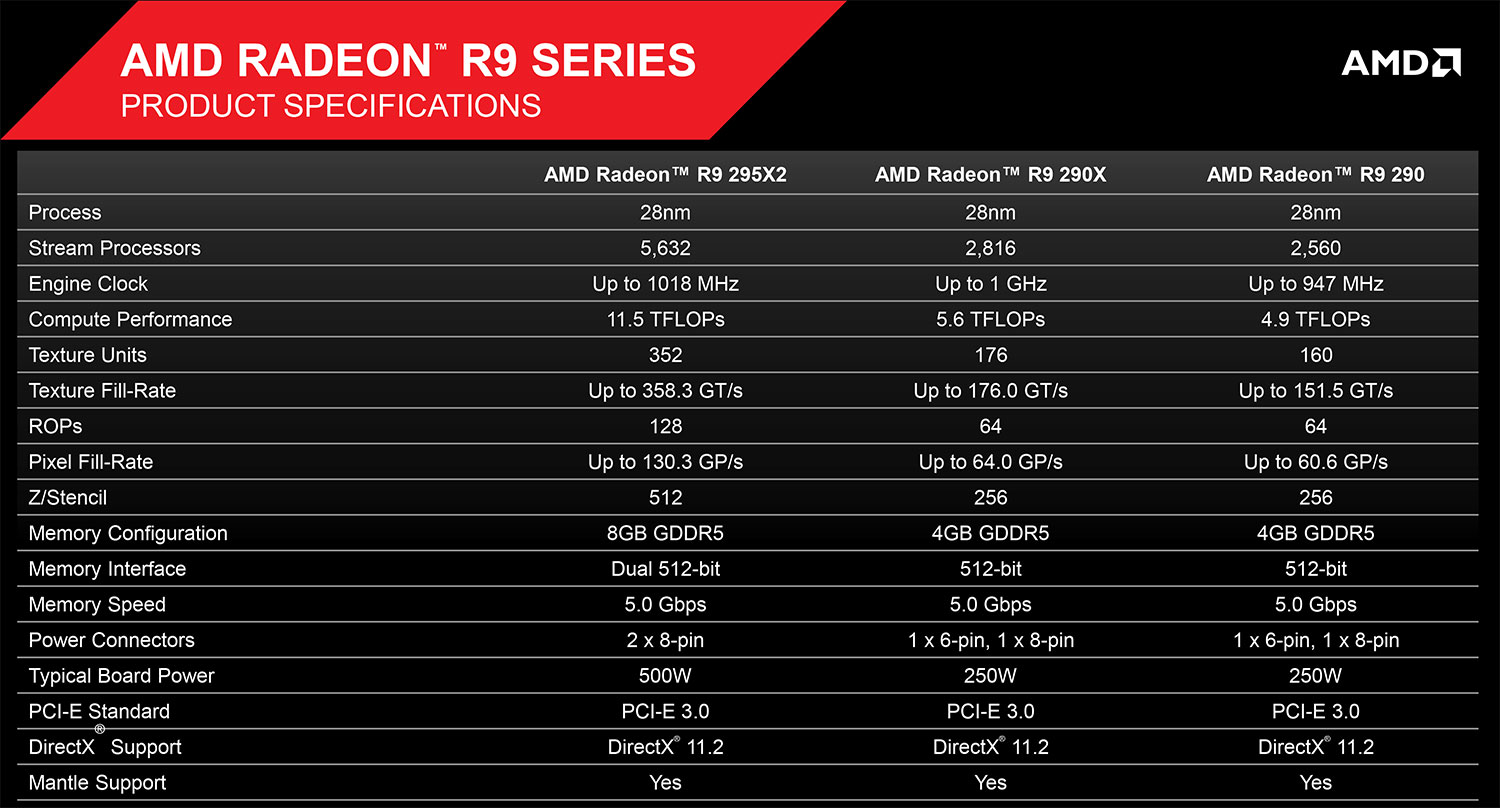 The GPU clock speed is labeled as “up to” 1020 MHz and I can say that in this instance, the R9 295X2 is running much closer to that top clock than the original reference R9 290X. The rest of the specifications show your general duplication of the single GPU cards – 352 texture units, 128 ROPs, 512 Z/stencil units, etc. Obviously, as with all dual GPU cards, performance isn’t going to scale 2:1 as we have the efficiency of CrossFire to deal with.

GPUs used on the Radeon R9 295X2 have some different properties than those used on the R9 290X. For one, they are using different target temperature of 75C versus the 95C we saw with the first wave of Hawaii parts. Partly because of this, GPU clocks should be much more consistent and the card to card variance we saw with reference R9 290X/290 should be a thing of the past.

To facilitate the XDMA PCI Express communication for the R9 295X2 a PLX bridge chip sits next to the primary GPU. This allows each GPU to get a full x16 allotment of bandwidth for chip to chip communication but only require a single x16 connection from the host PC. Again, this is common practice for dual-GPU cards in recent memory.

What is not common practice is the cooling solution used by AMD. The R9 295X2 has a 500 watt TDP and as such your standard two slot copper cooler was not going to cut it. We have already documented problems with AMD’s reference cooler for the original R9 290X and R9 290 and the company wanted no part of a repeat performance. For this card AMD has gone with a water cooled solution – a first for a reference design out of either AMD or NVIDIA.

On each GPU sits an Asetek combination water block and pump, connected in series to each other, then outlet to a radiator and fan through a sealed water loop. Enthusiasts have been using configurations like this on their processors for quite some time and the idea is essentially the same. The closed loop means installation is easy and the system is maintenance free while the water blocks allow for MUCH better thermal dissipation than you would get with standard copper heatsinks. The fan on the radiator is controlled automatically and adjusts based on the temperature of the fluid in the cooling system. 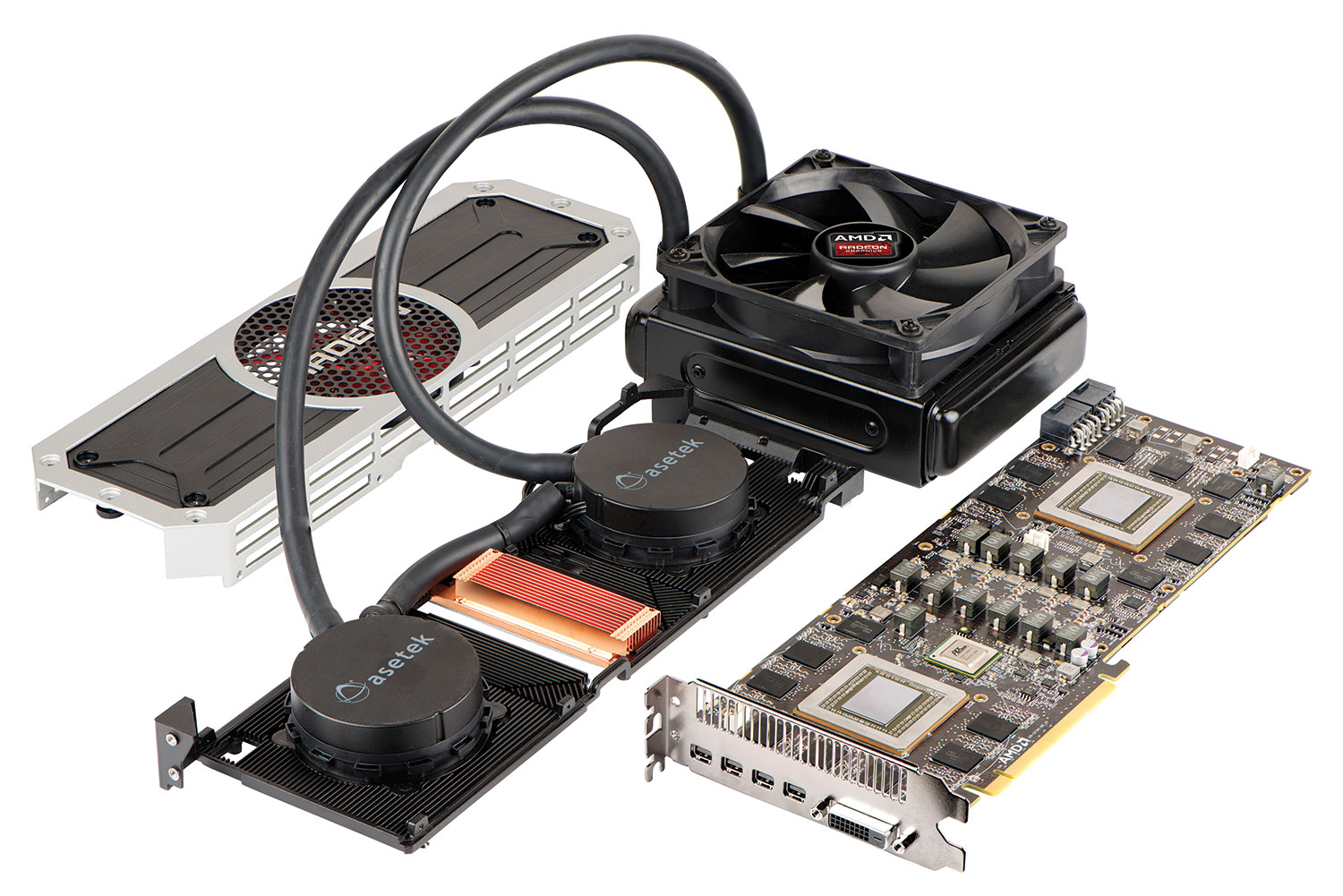 Some users, and other companies, might lament that fact that this cooler is more complicated than any other graphics card on the market before. While true, the differences installing a standard card and the R9 295X2 are minimal. All that really changes is a new set of four screws required to mount the radiator to the back of your case. Because the water blocks are already mounted on the PCB and even the fan is pre-mounted to the radiator, this is about as simple as you can get for water cooling. Any users looking to spend this kind of cash on a GPU should be more than willing to install it.

To help cool the memory and power delivery on the R9 295X2 AMD has included some heatsinks and a central fan. This fan speed will be controlled by the current going into the power regulation systems.

The card itself is quite long – longer than the GTX 690, longer than the HD 7990 and about on par with the MASSIVE ASUS ARES II card. At 307mm in length, you are definitely going to be limited on case installation if you are trying to squeeze this into any kind MicroATX or MiniITX chassis. The radiator is 64mm deep with the fan installed as well, another dimension to keep in mind. Water tubing length is 380mm so you’ll able to stretch the radiator to the back of most cases (or top should you go that route) without an issue.

At the far end of the card you’ll find just a pair of 8-pin PCIE connections to get this card up and running. That seems oddly…optimistic. More on that on the next page when we discuss installation requirements.

In terms of looks and styling, the R9 295X2 is much better than that all-plastic design of the Radeon HD 7990. AMD has also included some little touches that help it at least LOOK like it is worth the dough you shelled out for it. The metal cover for the coolers and heatsinks, along with the rivet styling, give the 295X2 an industrial look that rivals that of the GTX 700-series cards. The back plate on the card helps protect the components but also continues with the “high class” look.

The Radeon logo up top glows red as does the fan in the center and when powered on in a dark room or case, the red light definitely demands some attention.