VisionTek recently released a new storage product dubbed the mSATA mini USB 3.0 Bus-Powered SSD Enclosure (900696). Despite the name, VisionTek has an interesting product on its hands as it not only enables speedy portable storage (assuming you have hardware with USB 3.0 ports of course), but allows users to put any mSATA SSDs that would otherwise be gathering dust in a drawer to good use! Essentially, it is a small metal enclosure that accepts a mSATA SSD and interfaces it with a PC over USB 3.0.

The mSATA USB 3.0 enclosure measures 2.88" x 1.63" x 0.51" and is constructed of aluminum with a textured titanium color (for aesthetics) and rounded edges. Users can install any mSATA SSD up to 50mm in length. A third generation ASMedia ASM1153E controller then performs the conversion from the drive's SATA I, II, or III interface to USB 3.0. Naturally, you are going to take a performance hit due to the added latency and interface conversion introduced by the ASMedia controller versus directly attaching the drive to a motherboard's mSATA slot. Fortunately, the hit to performance is fairly minimal when dealing with large file transfers and sequential read and write performance.

According to Legit Reviews, their Kingston 120GB (SATA 3 6 Gbps) mSATA solid state drive saw sequential read and write speeds of 271 MB/s and 160 MB/s respectively when connected to a motherboard slot. When installed in the USB 3.0 enclosure, speeds dropped to 250 MB/s sequential reads and 158 MB/s sequential writes. Further, a large 71GB 4K video file transfer averaged out to 151 MB/s. The exact speeds will vary with the specific drive users install, but the thing to note is that the performance hit should be minimal (at least the performance relating to dealing with file copies, random access will take a larger hit) despite adding the USB 3.0 interface to the equation. 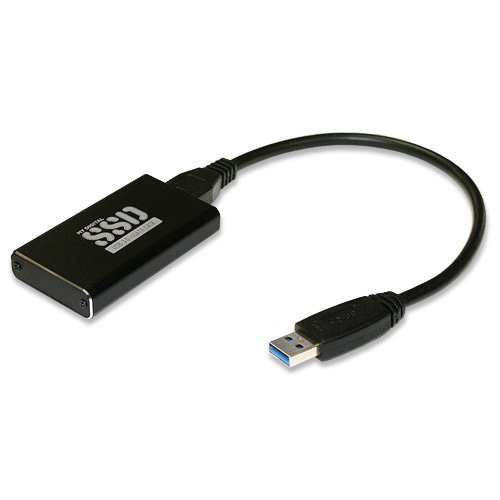 The VisionTek drive is available now with a three year warranty for $30.72 from Amazon, which is a tempting price for fast portable storage especially if you already have a mSATA drive laying around! Notably, it seems that VisionTek is not the only manufacturer sourcing these boards, as MyDigitalSSD has a simlar drive with an MSRP of $24.99.

If you are interested in putting together your own SSD-powered portable drive, check out the full review linked above.

Now, if I can only encourage Allyn to recycle some of his mSATA drives…