AMD let us spend some time with the new Kaveri mobility APU, the FX-7600P last month. Does it warrant the FX title?

The processor market is in an interesting place today. At the high end of the market Intel continues to stand pretty much unchallenged, ranging from the Ivy Bridge-E at $1000 to the $300 Haswell parts available for DIY users. The same could really be said for the mobile market – if you want a high performance part the default choice continues to rest with Intel. But AMD has some interesting options that Intel can't match when you start to enter the world of the mainstream notebook. The APU was slow to develop but it has placed AMD in a unique position, separated from the Intel processors with a more or less reversed compute focus. While Intel dominates in the performance on the x86 side of things, the GPU in AMD's latest APUs continue to lead in gaming and compute performance.

The biggest problem for AMD is that the computing software ecosystem still has not caught up with the performance that a GPU can provide. With the exception of games, the GPU in a notebook or desktop remains under utilized. Certain software vendors are making strides – see the changes in video transcoding and image manipulation – but there is still some ground AMD needs to accelerate down.

Today we are looking at the mobile version of Kaveri, AMD's latest entry into the world of APUs. This processor combines the latest AMD processor architecture with a GCN-based graphics design for a pretty advanced part. When the desktop version of this processor was released, we wrote quite a bit about the architecture and the technological advancements made into, including becoming the first processor that is fully HSA compliant. I won't be diving into the architecture details here since we covered them so completely back in January just after CES. 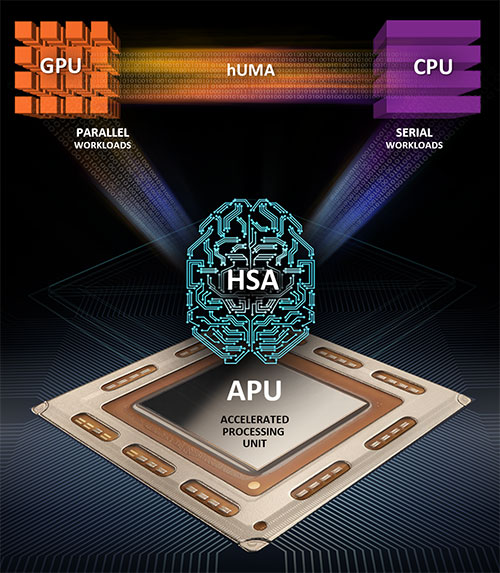 The mobile version of Kaveri is basically identical in architecture with some changes for better power efficiency. The flagship part will ship with 12 Compute Cores (4 Steamroller x86 cores and 8 GCN cores) and will support all the same features of GCN graphics designs including the new Mantle API.

Early in the spring we heard rumors that the AMD FX brand was going to make a comeback! Immediately enthusiasts were thinking up ways AMD could compete against the desktop Core i7 parts from Intel; could it be with 12 cores? DDR4 integration?? As it turns out…not so much.

Instead, AMD is using the FX brand in a place you likely least expected it: on a mobility APU. That's right, the AMD FX-7600P and FX-7500 models will carry the FX banner going forward. With what you ask? With slightly better performance than the other APUs below them in the product stack. 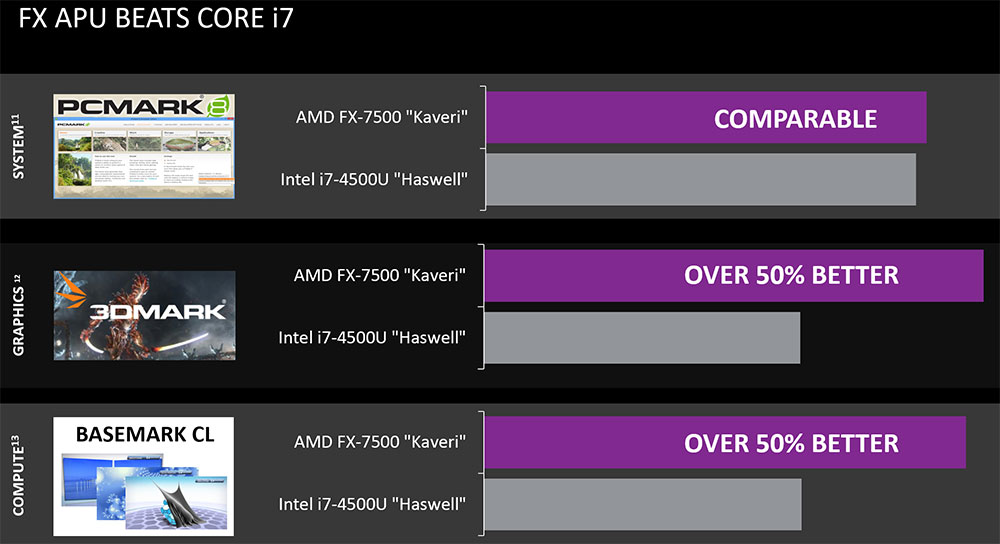 AMD is quite proud of its product placement in a few key areas. The AMD FX-7500 is a 19 watt APU that competes directly against the Intel Core i7-4500U Haswell processor, used quite often in notebooks today. In this slide AMD compares performance of the two processors in PCMark8, 3DMark and Basemark CL. It should not be a surprise then than the APU comes out ahead by large margins in latter two tests and is listed as "comparable" with PCMark8.

Avid readers of PC Perspective may note that these tests are quite selective. PCMark8 uses OpenCL for some of its more demanding tests, a compute language that can take advantage of the GPU resources provided by the Kaveri part. 3DMark is gaming focused, so again, that's a heavy GPU focus and Basemark CL, as the name implies, is a large set of OpenCL tests.

Here is the breakdown of the parts launching today from AMD. Broken up into two different power levels, 35 watt and 19 watt. The 35 watt parts include the FX-7600P, A10-7400P and A8-7200P with Compute Core ranges of 12, 10 and 8. All three processors include a quad-core x86 processor and the GCN GPU cores drop by a set of 2 each iteration. Clock speeds remain high across the board with the flagship hitting a base clock of 2.7 GHz and a Turbo Boost rate of 3.6 GHz. All of these parts support high speed DDR3 memory (up to 2133 MHz on the FX-7600P) as well as a full x16 lane of PCI Express 3.0

The 19 watt parts are more limited, starting at 10 Compute Cores and including an 8 core option. All of them also include a quad-core x86 processor – important for general computing. Base clock speeds range from 2.1 GHz to 1.8 GHz and maximum GPU clock rates are noticeably lower than the 35 watt derivatives. The PCIe implementation is also lowered to an eight lane Gen2 connection in order to save the most power for systems that are unlikely to need more bandwidth than that connection speed can provide.

AMD is also introducing a series of Pro level APUs that also fit in the 19 watt power envelope. The only outlier here is the AMD A6 PRO-7050B that drops to a dual-core x86 processor and 3 GPU cores!

Now AMD did let us test one of the new Kaveri APUs, though in a very limited one-day event in San Francisco. I did not get to keep a reference notebook for an extended period of time for a real-world analysis but the results provided by the FX-7600P are still very interesting. 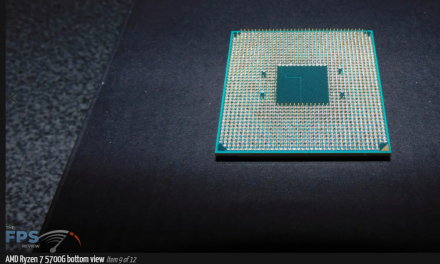