On Tuesday, AMD's newly minted Gaming Scientist, Richard Huddy, stopped by the PC Perspective office to talk about the current state of the company's graphics division. The entire video of the interview is embedded below but several of the points that are made are quite interesting and newsworthy. During the discussion we hear about Mantle on Linux, a timeline for Mantle being opened publicly as well as a surprising new idea for a competitor to NVIDIA's GameWorks program.

Richard is new to the company but not new to the industry, starting with 3DLabs many years ago and taking jobs at NVIDIA, ATI, Intel and now returning to AMD. The role of Gaming Scientist is to directly interface with the software developers for gaming and make sure that the GPU hardware designers are working hand in hand with future, high end graphics technology. In essence, Huddy's job is to make sure AMD continues to innovate on the hardware side to facilitate innovation on the software side.

(33:00) After the volume of discussion surrounding the NVIDIA GameWorks program and its potential to harm the gaming ecosystem by not providing source code in an open manner, Huddy believes that the answer to problem is to simply have NVIDIA release the SDK with source code publicly. Whether or not NVIDIA takes that advice has yet to be seen, but if they don't, it appears that AMD is going down the road of creating its own competing solution that is open and flexible.

The idea of OpenFX or OpenWorks as Huddy refers to it is to create an open source repository for gaming code and effects examples that can be updated, modified and improved upon by anyone in the industry. AMD would be willing to start the initiative by donating its entire SDK to the platform and then invite other software developers, as well as other hardware developers, to add or change to the collection. The idea is to create a competitor to what GameWorks accomplishes but in a license free and open way.

NVIDIA GameWorks has been successful; can AMD OpenWorks derail it?

Essentially the "OpenWorks" repository would work in a similar way to a Linux group where the public has access to the code to submit changes that can be implemented by anyone else. Someone would be able to improve the performance for specific hardware easily but if performance was degraded on any other hardware then it could be easily changed and updated. Huddy believes this is how you move the industry forward and how you ensure that the gamer is getting the best overall experience regardless of the specific platform they are using.

"OpenWorks" is still in the planning stages and AMD is only officially "talking about it" internally. However, bringing Huddy back to AMD wasn't done without some direction already in mind and it would not surprise me at all if this was essentially a done deal. Huddy believes that other hardware companies like Qualcomm and Intel would participate in such an open system but the real question is whether or not NVIDIA, as the discrete GPU market share leader, would be in any way willing to do as well.

Still, this initiative continues to show the differences between the NVIDIA and AMD style of doing things. NVIDIA prefers a more closed system that it has full control over to perfect the experience, to hit aggressive timelines and to improve the ecosystem as they see it. AMD wants to provide an open system that everyone can participate in and benefit from but often is held back by the inconsistent speed of the community and partners.

Mantle to be Opened by end of 2014, Potentially Coming to Linux

(7:40) The AMD Mantle API has been an industry changing product, I don't think anyone can deny that. Even if you don't own AMD hardware or don't play any of the games currently shipping with Mantle support, the re-focusing on a higher efficiency API has impacted NVIDIA's direction with DX11, Microsoft's plans for DX12 and perhaps even Apple's direction with Metal. But for a company that pushes the idea of open standards so heavily, AMD has yet to offer up Mantle source code in a similar fashion to its standard SDK. As it stands right now, Mantle is only given to a group of software developers in the beta program and is specifically tuned for AMD's GCN graphics hardware.

Huddy reiterated that AMD has made a commitment to release a public SDK for Mantle by the end of 2014 which would allow any other hardware vendor to create a driver that could run Mantle game titles. If AMD lives up to its word and releases the full source code for it, then in theory, NVIDIA could offer support for Mantle games on GeForce hardware, Intel could offer support those same games on Intel HD graphics. There will be no license fees, no restrictions at all.

The obvious question is whether or not any other IHV would choose to do so. Both because of competitive reasons and with the proximity of DX12's release in late 2015. Huddy agrees with me that the pride of these other hardware vendors may prevent them from considering Mantle adoption though the argument can be made that the work required to implement it properly might not be worth the effort with DX12 (and its very similar feature set) around the corner.

(51:45) When asked about AMD input on SteamOS and its commitment to the gamers that see that as the future, Huddy mentioned that AMD was considering, but not promising, bringing the Mantle API to Linux. If the opportunity exists, says Huddy, to give the gamer a better experience on that platform with the help of Mantle, and developers ask for the support for AMD, then AMD will at the very least "listen to that." It would incredibly interesting to see a competitor API in the landscape of Linux where OpenGL is essentially the only game in town.

(59:15) Huddy discussed the differences, as he sees it, between NVIDIA's G-Sync technology and the AMD option called FreeSync but now officially called Adaptive Sync as part of the DisplayPort 1.2a standard. Beside the obvious difference of added hardware and licensing costs, Adaptive Sync is apparently going to be easier to implement as the maximum and minimum frequencies are actually negotiated by the display and the graphics card when the monitor is plugged in. G-Sync requires a white list in the NVIDIA driver to work today and as long as NVIDIA keeps that list updated, the impact on gamers buying panels should be minimal. But with DP 1.2a and properly implemented Adaptive Sync monitors, once a driver supports the negotiation it doesn't require knowledge about the specific model beforehand. 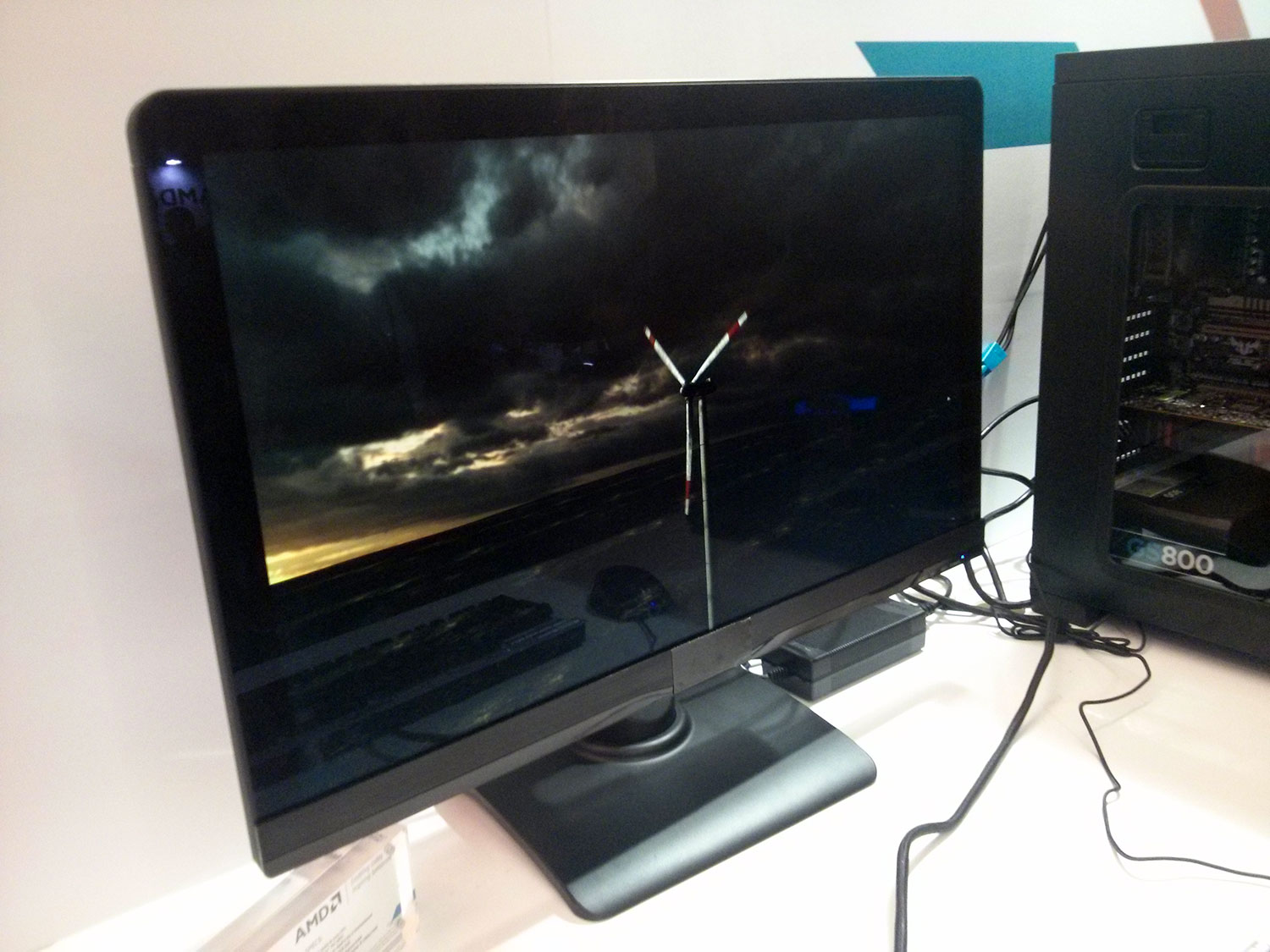 According to Huddy, the new Adaptive Sync specification will go up to as high as 240 Hz and as low as 9 Hz; these are specifics that before today weren't known. Of course, not every panel (and maybe no panel) will support that extreme of a range for variable frame rate technology, but this leaves a lot of potential for improved panel development in the years to come. More likely you'll see Adaptive Sync ready display listing a range closer to 30-60 Hz or 30-80 Hz initially.

Prototypes of FreeSync monitors will be going out to some media in the September or October time frame, while public availability will likely occur in the January or February window.

How does AMD pick game titles for the Never Settle program?

(1:14:00) Huddy describes the fashion in which games are vetted for inclusion in the AMD Never Settle program. The company looks for games that have a good history of course, but also ones that exemplify the use of AMD hardware. Games that benchmark well and have reproducible results that can be reported by AMD and the media are also preferred. Inclusion of an integrated benchmark mode in the game is also a plus as it more likely gets review media interested in including that game in their test suite and also allows the public to run their own tests to compare results.

Another interesting note was the games that are included in bundles often are picked based on restrictions in certain countries. Germany, for example, has very strict guidelines for violence in games and thus add-in card partners would much prefer a well known racing game than an ultra-bloody first person shooter.

First and foremost, a huge thanks to Richard Huddy for making time to stop by the offices and talk with us. And especially for allowing us to live stream it to our fans and readers. I have had the privilege to have access to some of the most interesting minds in the industry, but they are very rarely open to having our talks broadcast to the world without editing and without a precompiled list of questions. For allowing it, both AMD and Mr. Huddy have gained some respect!

There is plenty more discussed in the interview including AMD's push to a non-PC based revenue split, whether DX12 will undermine the use of the Mantle API, and how code like TressFX compares to NVIDIA GameWorks. If you haven't watched it yet I think you'll find the full 90 minutes to be quite informative and worth your time.

UPDATE: I know that some of our readers, and some contacts and NVIDIA, took note of Huddy's comments about TressFX from our interview. Essentially, NVIDIA denied that TressFX was actually made available before the release of Tomb Raider. When I asked AMD for clarification, Richard Huddy provided me with the following statement.

I would like to take the opportunity to correct a false impression that I inadvertently created during the interview.

Contrary to what I said, it turns out that TressFX was first published in AMD's SDK _after_ the release of Tomb Raider.

Nonetheless the full source code to TressFX was available to the developer throughout, and we also know that the game was available to NVIDIA several weeks ahead of the actual release for NVIDIA to address the bugs in their driver and to optimize for TressFX.

Again, I apologize for the mistake.

That definitely paints a little bit of a different picture on around the release of TressFX with the rebooted Tomb Raider title. NVIDIA's complaint that "AMD was doing the same thing" holds a bit more weight. Since Richard Huddy was not with AMD at the time of this arrangement I can see how he would mix up the specifics, even after getting briefed by other staff members.

If you want to be sure you don't miss any more of our live streaming events, be sure to keep an eye on the schedule on the right hand side of our page or sign up for our PC Perspective Live mailing list right here.

Ray Tracing; The future of graphics?