My thoughts about the EVGA Torq X10, before its pre-order period completes.

This review comes before the end of the pre-order period. The reason why I targeted that deadline is because the pre-order perks are quite significant. First, either version of the mouse is listed for about $50 off of its MSRP (which is half price for the plastic version). EVGA also throws in a mouse pad for registering your purchase. The plastic mouse is $49.99 during its pre-order period ($99.99 MSRP) and its carbon fiber alternative is $79.99 ($129.99 MSRP). EVGA has supplied us with the plastic version for review.

Being left-handed really puts a damper on my choice of gaming mice. If the peripheral is designed to contain thumb buttons, it needs to either be symmetric (because a right hand's thumb buttons would be controlled by my pinky or ring finger) or be an ergonomic, curved mouse which comes in a special version for lefties that is mirrored horizontally (which is an obvious risk, especially when the market of left-handed gamers is further split by those who learned to force themselves to use right-handed mice).

The EVGA Torq X10 is the former, symmetric type of mouse. It does not curve left or right into your hand, which is something that some people will like and others will not. This is personal preference and one of the main reasons why you should feel a mouse in your hand, if possible, to get its fit.

Vertically, some people will like a high-arch mouse and others will like a low-arch one. This is adjustable in the Torq X10, however, with an included Torx screwdriver. A screw at the back of the mouse will raise and lower the palm rest and buttons, increasing or decreasing the curve made by the top of the mouse. When I initially received the mouse, I felt that even the steepest setting was not perfect. When I actually used the mouse, though, it felt comfortable. If you purchase this mouse, you might wish to choose a setting and then use it for a while. 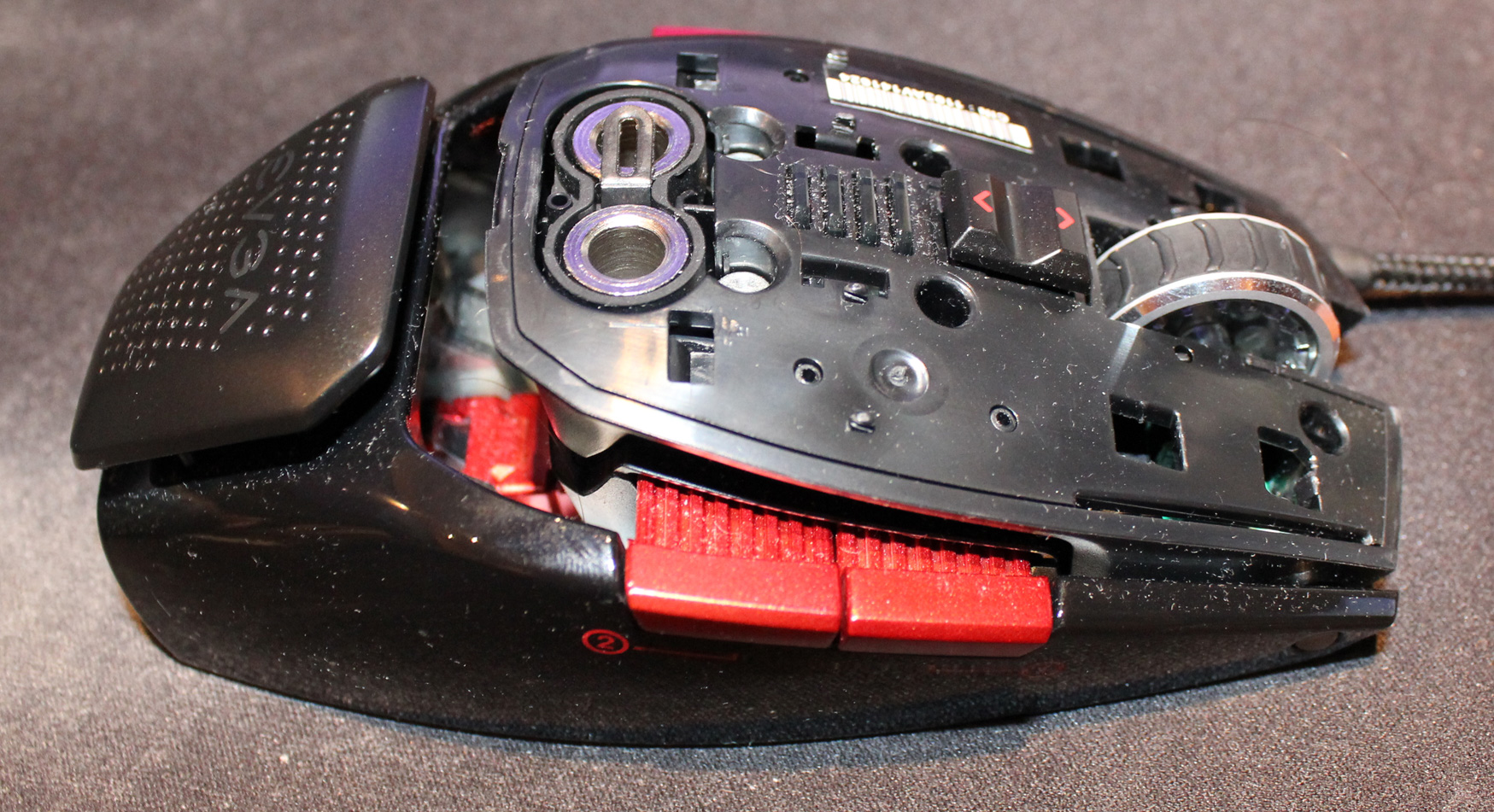 With its cover off, exposing the two weight compartments.

EVGA also provides three pairs of weights to put inside the mouse. I found it most comfortable to use the middle weights. Also, when I returned to my left-handed Razer Naga 2014, the EVGA mouse made the Razer one feel a bit too light to me. As big and bulky as the Razer Naga is, it is actually very light compared to this EVGA mouse (and I think I prefer the extra weight).

Now on to the buttons. The two main ones have a crisp click to them, which I applaud. The right mouse button feels a bit more hesitant, despite EVGA's claims that they are identical switches, and it even seemed to appear in the benchmark that I created. It could be just me, because the cover for the extra weight compartment is also the left and right mouse buttons and could be improperly seated, but we will discuss that more in the next page. 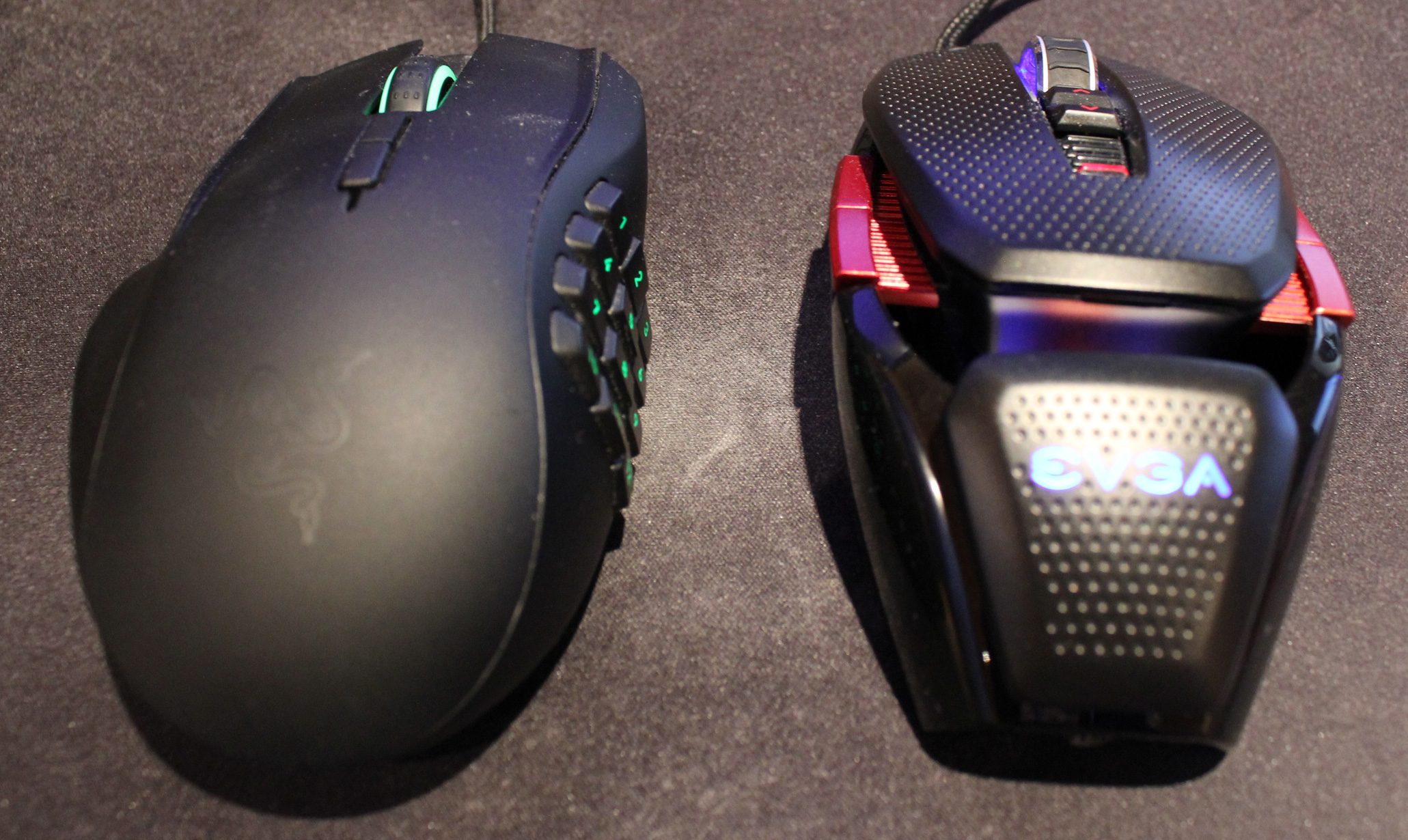 As for the side buttons, I find them quite mushy as they have a fairly long travel. This will be discussed in the benchmark, later, but I could not actually measure this being an issue (even though it might be one). When I was holding the mouse, not connected to a computer, I found the side buttons to be quite far forward. In actual usage, however, they felt appropriately placed. This could mean that I hold the mouse differently when I use it, or it could be my grip adjusting to the mouse. Either way, it was comfortable.

Judging purely from my (subjective) experience, I like the Torq X10 and its design. I would probably prefer that the left and right mouse buttons were separated (up to about the bottom of the mouse wheel) so I am not clicking on the weight compartment lid. I would also prefer a slightly different side mouse button feel.