Gigabyte has introduced a striking new member for FM2+

AMD faces a bit of a quandary when it comes to their products.  Their APUs are great at graphics, but not so great at general CPU performance.  Their products are all under $200 for the CPU/APU but these APUs are not popular with the enthusiast and gaming crowd.  Yes, they can make excellent budget gaming systems for those who do not demand ultra-high resolutions and quality settings, but it is still a tough sell for a lot of the mainstream market; the primary way AMD pushes these products is price.

Perhaps the irony here is that AMD is extremely competitive with Intel when it comes to chipset features.  The latest A88X Fusion Control Hub is exceptionally well rounded with four native USB 3.0 ports, ten USB 2.0 ports, and eight SATA-6G ports.  Performance of this chipset is not all that far off from what Intel offers with the Z87 chipset (USB and SATA-6G are slower, but not dramatically so).  The chip also offers RAID 0, 1, 5, and 10 support as well as a 10/100/1000 Ethernet MAC (but a physical layer chip is still required). 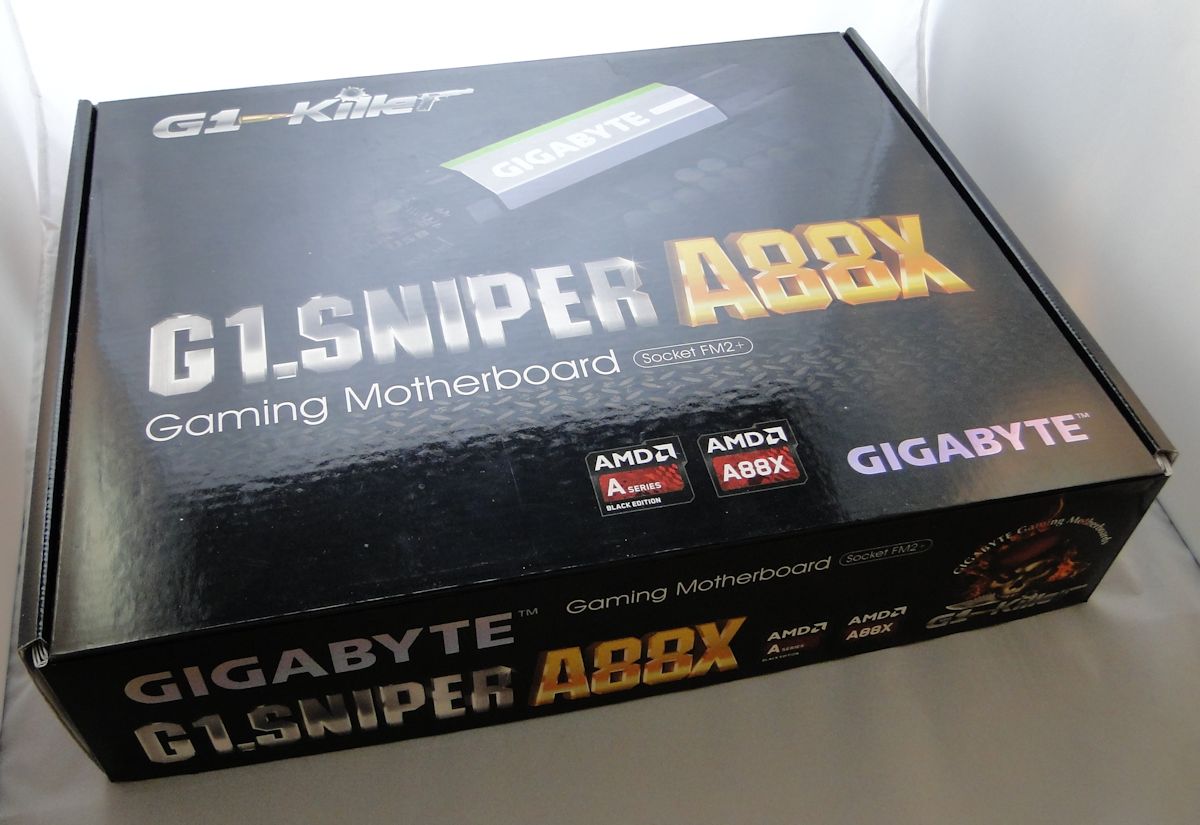 Now we get back to price.  AMD is not charging a whole lot for these FCH units, even the top end A88X.  I do not have the exact number, but it is cheap as compared to the competing Intel option.  Intel’s chipset business has made money for the company for years, but AMD does not have that luxury.  AMD needs to bundle effectively to be competitive, so it is highly doubtful that the chipset division makes a net profit at the end of the day.  Their job is to help push AMD’s CPU and APU offerings as much as possible.

These low cost FCH chips allow motherboard manufacturers to place a lot of customization on their board, but they are still limited in what they can do.  A $200+ motherboard simply will not fly with consumers for the level of overall performance that even the latest AMD A10 7850K APU provides in CPU bound workloads.  Unfortunately, HSA has not yet taken off to leverage the full potential of the Kaveri APU.  We have had big developments, just not big enough that the majority of daily users out there will require an AMD APU.  Until that happens, AMD will not be viewed favorably when it comes to its APU offerings in gaming or high performance systems.

The quandary obviously is how AMD and its motherboard partners can create inexpensive motherboards that are feature packed, yet will not break the bank or become burdensome towards APU sales?  The FX series of processors from AMD do have a bit more leeway as the performance of the high end FX-8350 is not considered bad, and it is a decent overclocker.  That platform can sustain higher motherboard costs due to this performance.  The APU side, not so much.  The answer to this quandary is tradeoffs.

The Sniper brand is the enthusiast series from Gigabyte that was initially introduced for Intel processors.  This obviously has changed to include the latest AMD APUs and their corresponding motherboards.  Typically the Sniper boards are much higher priced than their more mainstream counterparts, due to build quality and features.  The FM2+ platform has not yet made waves with the majority of enthusiasts, and so the focus on the Sniper branding for FM2+ has to be laser sharp so as not to inflate the price of the motherboard. 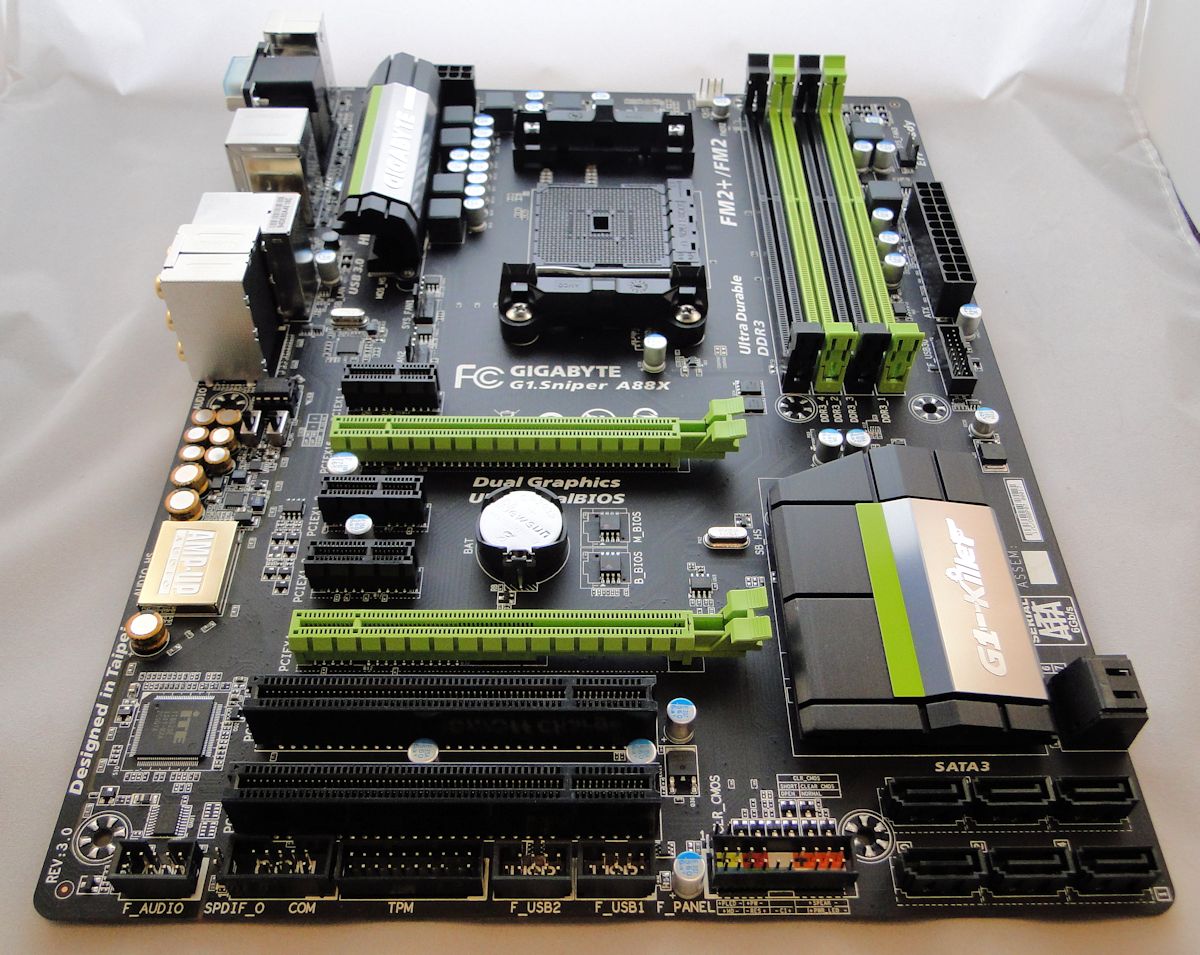 The focus of the G1.Sniper A88X is most obviously audio for this release.  The amount of audio features for this board is pretty impressive.  This is all well and good, but there had to be some compromises with the design to be able to hit the sub-$125 US price point that Gigabyte is aiming for.  Before we go into those compromises, let us take a look at what I consider to be a pretty beefy audio implementation.

The first feature is the USB DAC-UP functionality.  Gigabyte implements a single USB port, that is gold plated, and has very fine voltage and current control.  Not every user will utilize the built-in audio of the board, and may in fact opt for a USB based device for sound (headphones, external sound card, etc.).  This particular implementation smooths out the power delivery and utilizes the gold plating to give the best possible connection.  This is an interesting idea, and a useful feature for some, but it likely will not be universally utilized.  I guess the gold connections are nice, but since the USB specification is digital, we will not be experiencing any “Monster Cable” type improvements.  The improved electrical contact in this case just means that the connection will theoretically be better so no data is dropped.  The gold color also allows users to easily identify which USB port is the DAC-UP unit.