Next is the AMP-Up functionality.  Some years back, I had reviewed several soundcards from Auzentech that featured swappable OPAMPS.  This allows users to tailor their listening experience to a pretty nice degree, as the OPAMPs did add a certain color to sound.  Users can go on Digi-Key and order up a set of OPAMPs to their liking and replace the standard ones on their board.  Individual OPAMPS are not all that expensive, and a user can get some near-professional quality units for not a whole lot of money.  Gigabyte has implemented this feature into their G1.Sniper series, and the A88X did not get passed over.    Gigabyte does in fact offer a set of three OPAMPs for around $80, providing three very different characteristics, that should satisfy most users’ preferences for sound.  This is pretty expensive for just three OPAMPs, so I would suggest going somewhere local (or Digi-Key) to get your replacement chips.  It is relatively simple to pull the current OPAMP and replace it with a different unit. 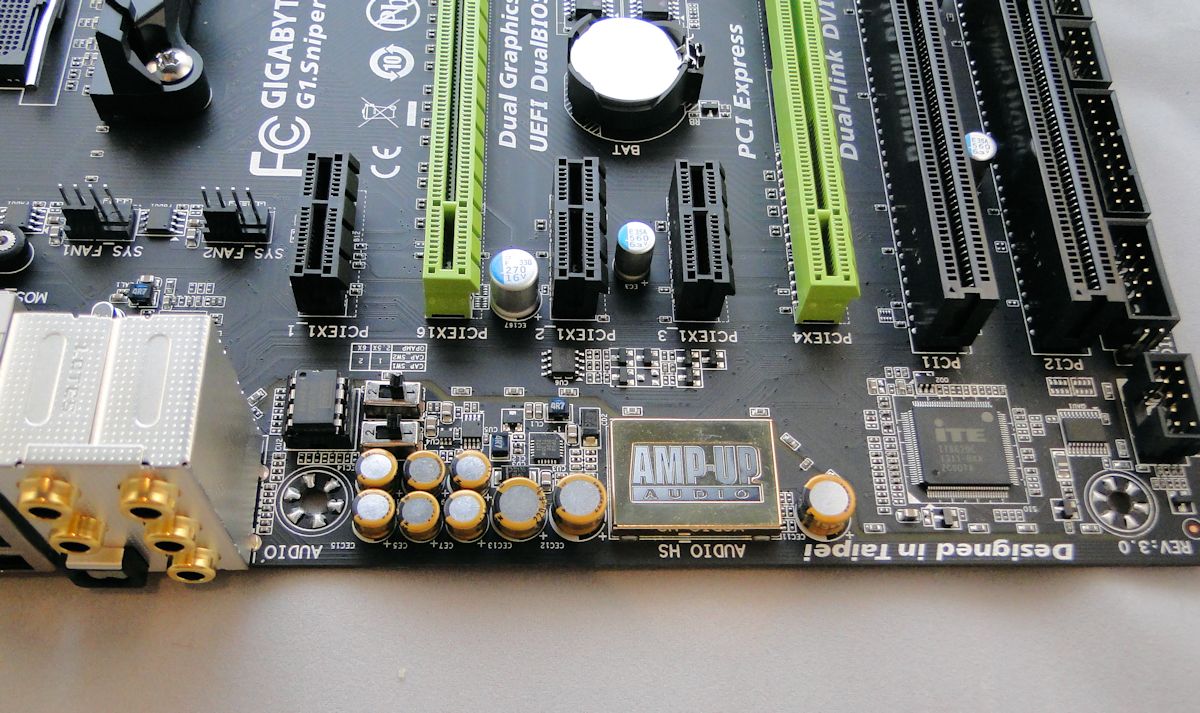 Gigabyte implements a gain switch for those users who either prefer speakers or headphones.  The base setting is 2.5x gain for speakers from the line out, but if a user prefers headphones and does not have an external amplifier, they can choose the 6x gain setting.  This should provide for a much more dynamic experience for those with higher impedance headphones.  Some higher end headphones feature up to 600 ohms, but that is quite uncommon.  Most higher end units will be 32 ohms and above.  Increasing the gain will improve the audio output for these products, for the listener, without having to resort to buying an external amplifier.

The build of the board also is very important to sound quality.  Gigabyte implements “Noise Guard”, which is a physical isolation of the sound functionality from the rest of the board.  Motherboards are very electrically noisy due to shared power planes, speed of components, and the close proximity of said components.  Gigabyte has designed the PCB so there are no shared power and ground planes between the main portion of the motherboard and the audio portion.  Power and data that do go to the audio portion are filtered.  Gigabyte accentuates this feature by mounting colored LEDs behind this “line” to show that there are no wires crossing this stretch of PCB, plus it has a nice green glow to it.

Physically Gigabyte has also accentuated audio by implementing gold connections for not only the USB DAC-UP, but for all of the analog inputs and outputs.  The PCB is still based on copper interconnects, so do not get terribly excited about melting this board down.  Gigabyte does utilize Nichicon Pro-Audio capacitors throughout the audio portion.  Higher quality caps with greater capacitance will insure that there will be little to no clipping with audio that exhibits a wide spectrum of fast changing frequencies that requires more power than smaller caps can potentially provide.

While audio may be the primary feature of the board, Gigabyte did not skimp on other areas.  The board features their Ultra Durable 4 construction, which features high quality solid caps.  It has the Glass Fabric PCB which is intended to protect against humid conditions.  Finally it has the dual BIOS that Gigabyte has been implementing for ages.

The BIOS itself is the 3D UEFI BIOS that Gigabyte started implementing a few years ago initially on Intel based boards.  With the release of Windows 8, UEFI is necessary for all boards.  The layout of the BIOS is logical and easy to understand.  The overclocking features are all located under the M.I.T. settings.  Every standard BIOS setting can be adjusted here, and the BIOS can be set up to be more power efficient or have higher overclocking protection… or any combination of the two.  The overall implementation is still relatively basic as compared to the latest Z87 and Z97 boards from Gigabyte that have the very fancy UEFI interface that is highly customizable.

One of the last protection based innovations that Gigabyte has provided this board is the use of individual fuses for each USB 3.0 port.  If a USB device somehow pops the fuse for that particular port, it will not affect any of the other USB ports on that riser.  Typically one fuse per riser has been used in other boards, but this is something new from Gigabyte.  Unfortunately, this is only implemented on USB 3.0 ports, leaving the USB 2.0 ports to utilize one fuse per riser.  If that fuse is blown for that riser, all of the USB ports on it will be dead. 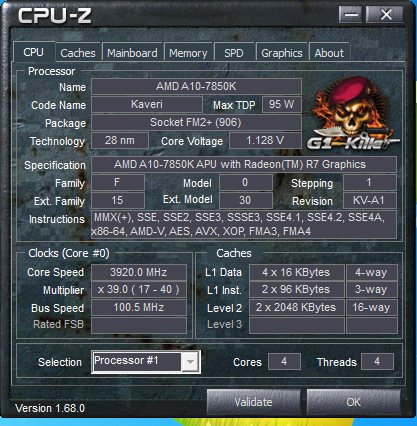 The back video outputs for this board are mostly OK.  It does feature a dual link DVI output which can power a 2560×1600 screen without issue.  The HDMI port can push 4K resolutions (supposedly), but only at 30 Hz.  It finally has a VGA port for older analog connections.  I really wish that they would have included a DisplayPort connection, but that apparently was not in the cards.  The board itself can support a native Eyefinity implementation as long as the two digital and single analog connections are used.

Gigabyte does include some bundled software, one of which is the cFos networking software.  This essentially uses CPU cycles to implement Quality of Service.  This is a software implementation designed to compete with products which feature Qualcomm’s Killer NIC chips.  While this is nice, the only problem becomes when another computer on the network decides to stream a few torrents or videos.  cFos does not somehow cut through that traffic to provide QoS.  That level of QoS requires the router to be able to discern what traffic takes precedence.