First impressions of this board are generally good.  The black and fluorescent lime/green makes a nice contrast and gives the board a lot of character.  The layout looks a little busy, but still uncluttered.  I guess my best way to describe it is, “This thing means business.”  The heatsinks flow with the design and do not look cheap or poorly implemented.  The gold accents are not gaudy or over the top.  It still features plenty of silver and black throughout the metal parts to give it a solid look.

The board is actually fairly small and compact for a full ATX unit.  When installing it into a case, it does not use the 3rd row of screws.  This means that when the user installs the DIMMs, they need to be careful not to deflect the PCB too badly when pressing down (unsupported by screws).  Everything is pretty snug and tight throughout the board. 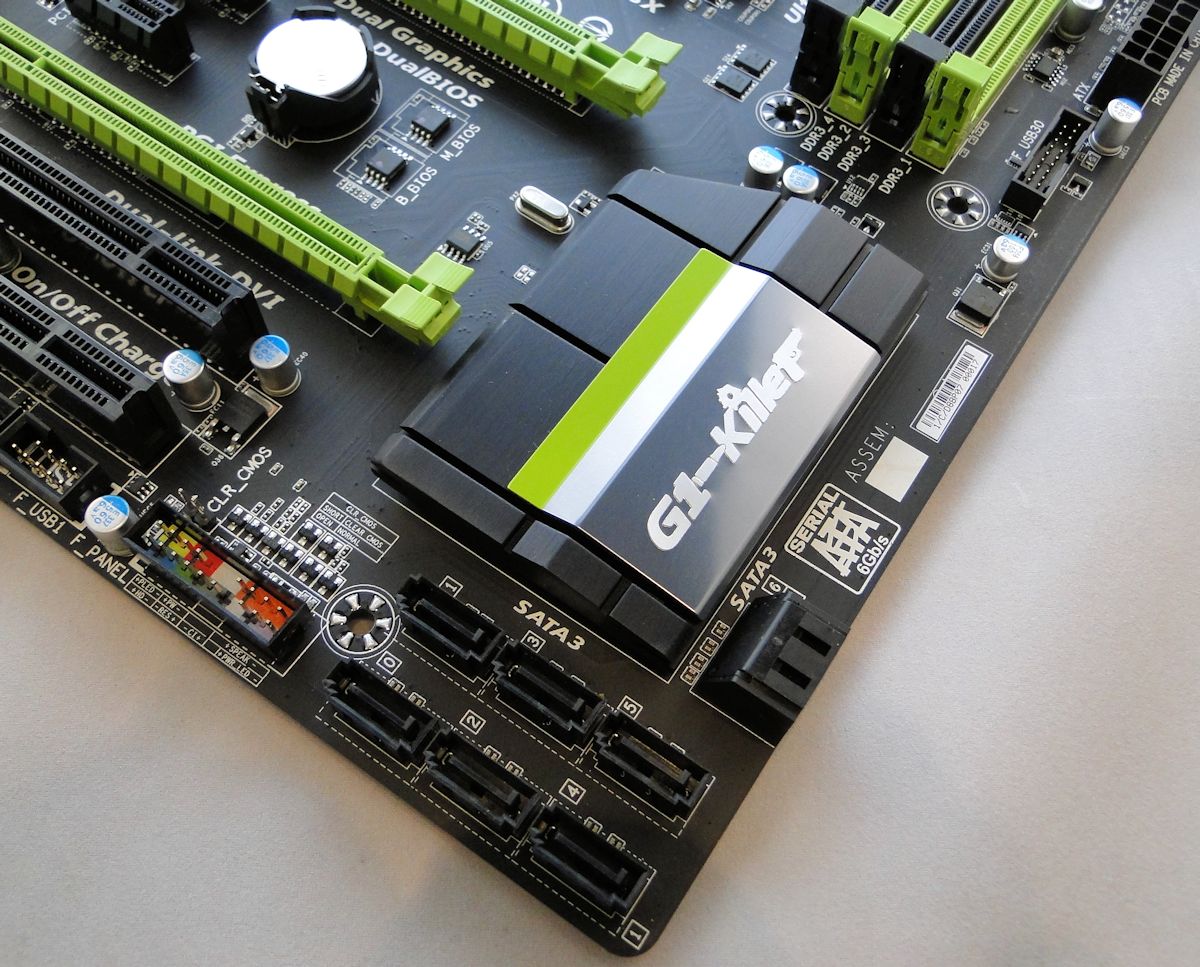 The SATA connectors are somewhat interesting.  The first two are on their side and behind the second PEG slot to allow for those to be plugged in while a longer card is in use.  The other six SATA ports are facing upwards from the board.  This is done for space and routing reasons, but it is not a setup that I personally enjoy or usually employ.  When testing different drives, these perpendicular-to-the board SATA ports are easy to reach.  When actually installing into a working case and trying to route and hide the cables, it is a bit more messy and problematic.

It is odd to see two PCI slots in use anymore, but this is not uncommon in FM2+ boards.  The current Kaveri based APU has 24 PCI-E lanes that can be divided in multiple ways.  Four of those lanes go directly to the FCH for I/O functionality.  The FCH has another four PCI-E 2.0 lanes coming off of it.  These are often reserved for extra USB 3.0 or Gig-E controllers.  Kaveri does support 2 x CrossFire X8 connections, as well as 4 extra PCI-E lanes to spare for other duties.

The power delivery system is not nearly as robust as we have seen with other Gigabyte motherboards.  It features a 4+2 power phase array that feeds the APU and the memory controller.  Usually we have seen higher end FM2+ boards feature 6+2 units (and the older AM3+ boards had up to 8+2 units).  The reasoning behind this is that AMD only supports up to 100 watt TDP processors as compared to the 125 watt+ processors that AM3+ handled (including the 220 watt monsters that are the FX-9000 series).  Theoretically this could mean a less impressive overclock as compared to boards with a higher phase count and potentially higher power support.  In reality, power does not seem to be as much of a problem as does the process technology and design decisions that AMD made with the latest Kaveri APUs.  No matter what heroic measures are taken, overclocking on air typically leads to a 4.4 to 4.5 GHz overclock.  Only when LN2 is used do we see anything higher. 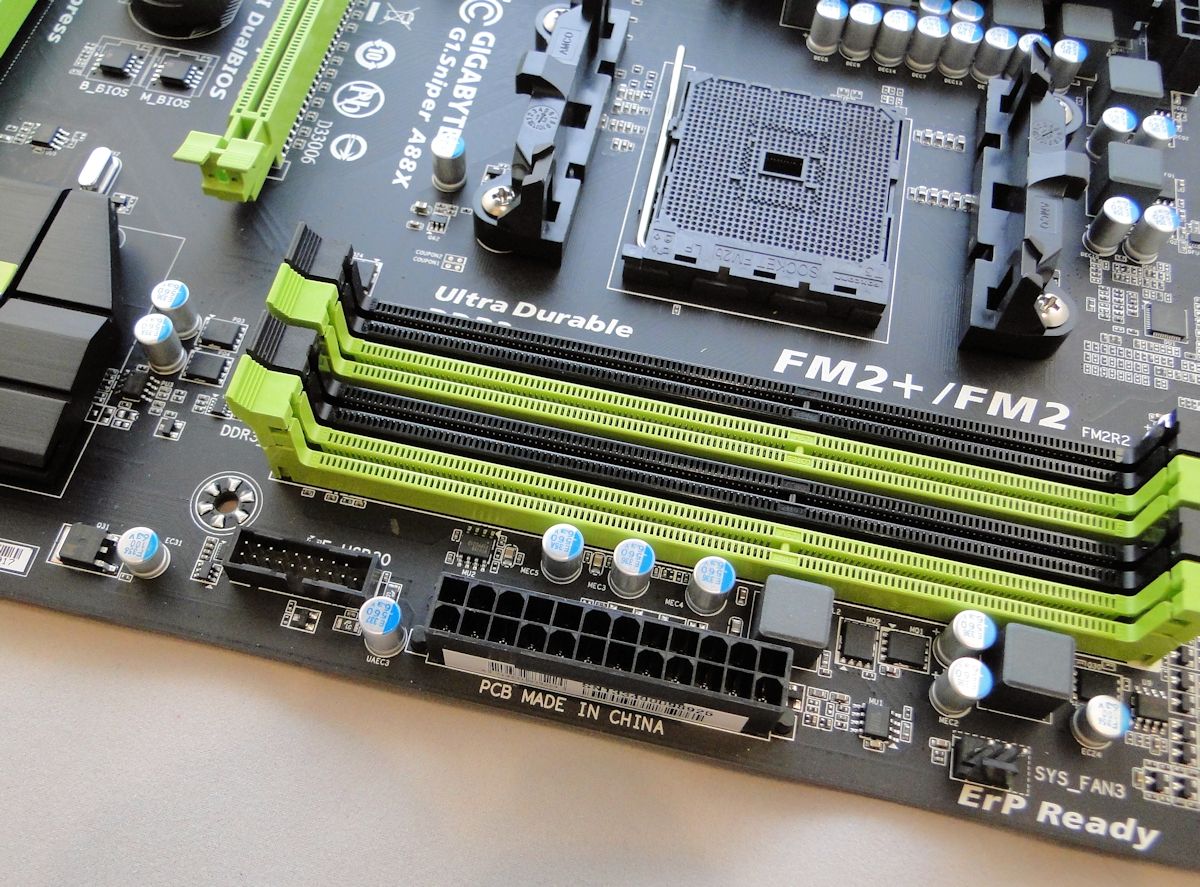 I am also questioning the area around the CPU in terms of spacing.  The capacitors from the power phases seem to get a bit closer to the socket than I have seen in other boards.  I mention this because I have an older heatsink which requires a different bracket as compared to what current FM2+ boards have as stock.  This bracket has fit in every AM3, AM3+, FM1, and FM2 boards that I have reviewed over the years.  It is only this Gigabyte G1.Sniper A88X board that I have seen it not fit due to tolerances.  The holes through the board are in the right place, but the capacitors are too close for it to work with this board.

The board is really only about average when we look at installed USB slots.  It features four USB 2.0 ports and 2 USB 3.0 ports on the back.  The board has the USB 3.0 header for front panel ports as well.  We must not forget that single USB-DAC for audio devices.  7.1 audio is supported by the analog outputs on the back as well.  Finally we see that it does feature a single shared PS/2 port for legacy keyboards and mice.  The board does not feature any kind of wireless functionality.

NVIDIA to Bring Back SoundStorm? 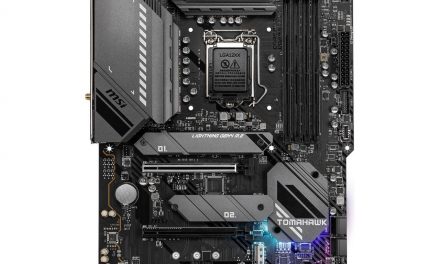