For networking duties MSI utilizes Qualcomm’s Killer NIC product.  The actual chip is an Atheros Gig-E adapter, but Qualcomm provides a robust and full featured software stack for that product.  Performance is very similar overall to the latest Intel Gig-E chips, but seemingly without the premium those require.  The software stack is highly configurable and low overhead.  It can provide QoS for gaming, streaming, and torrenting.  Users can identify what packets (applications) will get priority over others.  The software does a lot of work behind the scenes to improve network performance for that particular machine, but of course it cannot affect other machines on the network and their bandwidth usages.  It is also an interesting way to monitor traffic going to and from that particular PC. 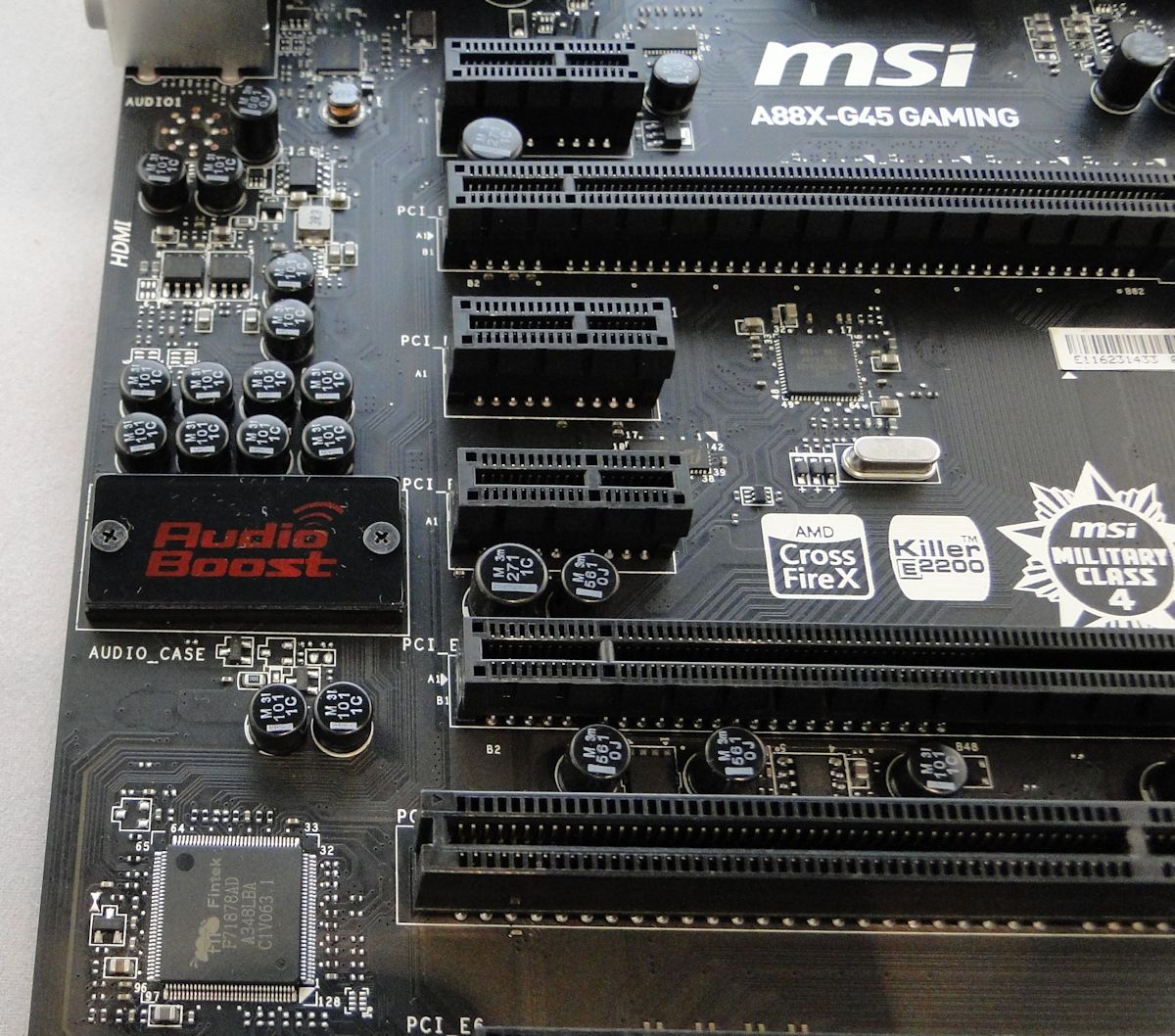 Audio Boost is the killer app for this particular board.  It does very well in sound delivery.

Stepping away from the hardware, we need to take a look at the UEFI implementation.  MSI has done a nice job implementing a graphical interface with plenty of features that make sense for enthusiasts.  The UEFI of course has the ability to adjust any potential setting that a user can imagine.  Voltages, timings, and ratios are easily discovered and optimized for a user with the knowhow.  The built-in fan control is really a highlight for the product, as it is highly customizable for the user and their cooling and sound needs.  There is also the ability to save up to 8 overclocking (or underclocking) settings that can be called up and implemented.  Is it wintertime and the house temp is quite a bit lower so overclocks can be higher with less fan speed?  No problem.  Is it blazing hot outside and the PC will only be playing back movies?  Go into the saved OC Profiles and bring up the profile of choice for the situation.

The UEFI OC Genie is also available for users who do not want to mess around with manually overclocking their chip.  My luck with this was minimal.  I had far greater success with the physical OC button on the board itself.  When the machine was turned off and the OC button depressed, it then started up and automatically overclocked the machine.  There is also a toggle switch that goes from a “Turbo” mode for overclocking to a “Gaming” mode which is a more aggressive overclocking regime in terms of settings and voltages.  I still prefer to overclock manually, as it allows more granularity and potentially higher overclocks for the user. 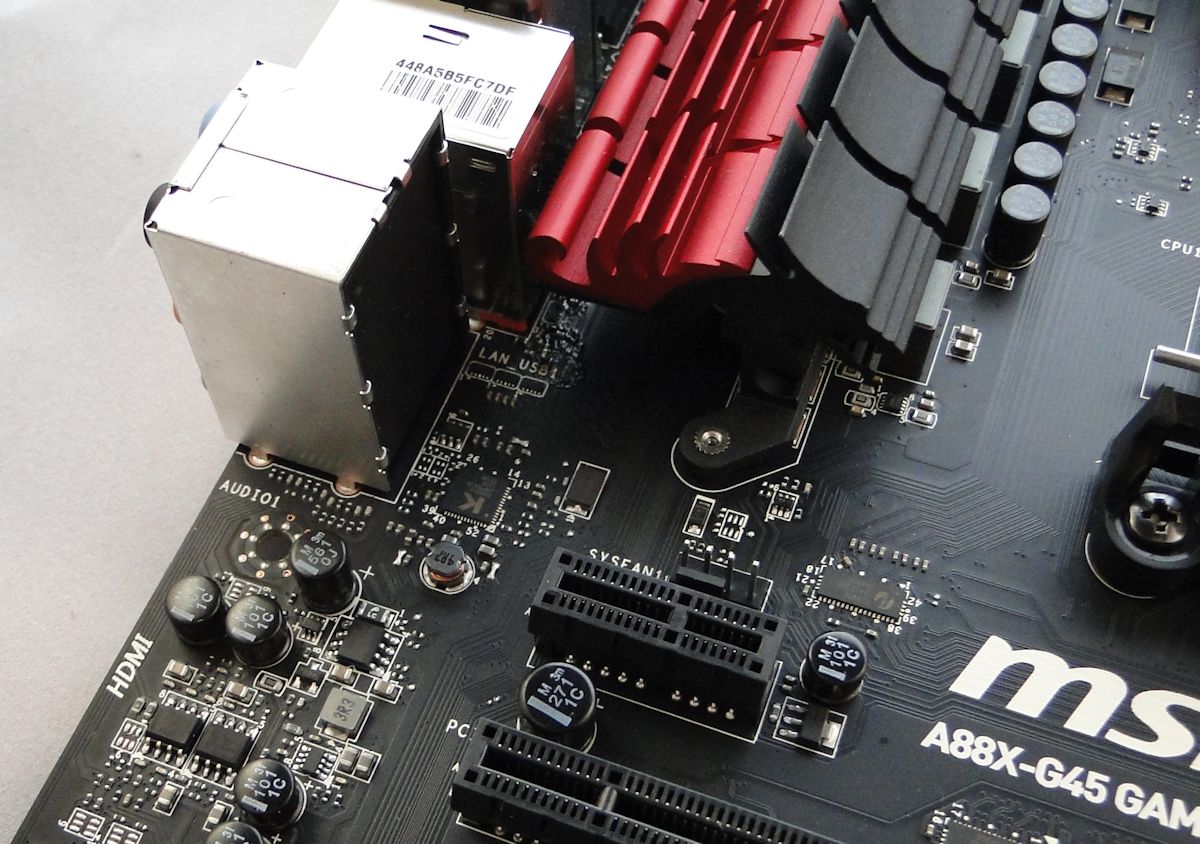 That little chip in there is the Killer NIC.  Yes, it is only an Atheros based Gig-E controller, but it still performs well and has an impressive software stack behind it.

Multi-GPU setups are supported on this board, but it is limited to CrossFire so far.  Unlike the previous AMD 900 series chipsets which support both CrossFire and SLI, the FM2+ socket is not licensed for NVIDIA SLI support.  Perhaps one day they will, but for now the user is limited to AMD cards in multi-GPU.  When this board is used with Kaveri based APUs, it supports PCI-E 3.0 speeds.  The board has three PEG slots, two of which run from the APU at 1 x 16 and 1 x 8 PCI-E 3.0 speeds.  When the first two slots are populated, they both run at 1 x 8 speeds.  The third PEG slot runs off of the A88X hub, and so runs at 1 x 4 PCI-E 2.0 speeds.  While the board does support 3-way CrossFire, I would not suggest it for such a platform.

Memory support for the board extends officially to DDR-3 2400 speeds.  It supports both Intel XMP and AMD AMP automatic memory timings and speeds.  For testing I utilized DDR-3 2133 modules from AMD.  The 2400 modules are fairly common anymore and do show a small improvement in overall performance, especially in graphics, with the Kaveri based APU.  Speeds above 2400 are only achieved by overclocking the b-clock of the board.  Unfortunately, that typically is about 105 MHz on that clock before things start breaking down. 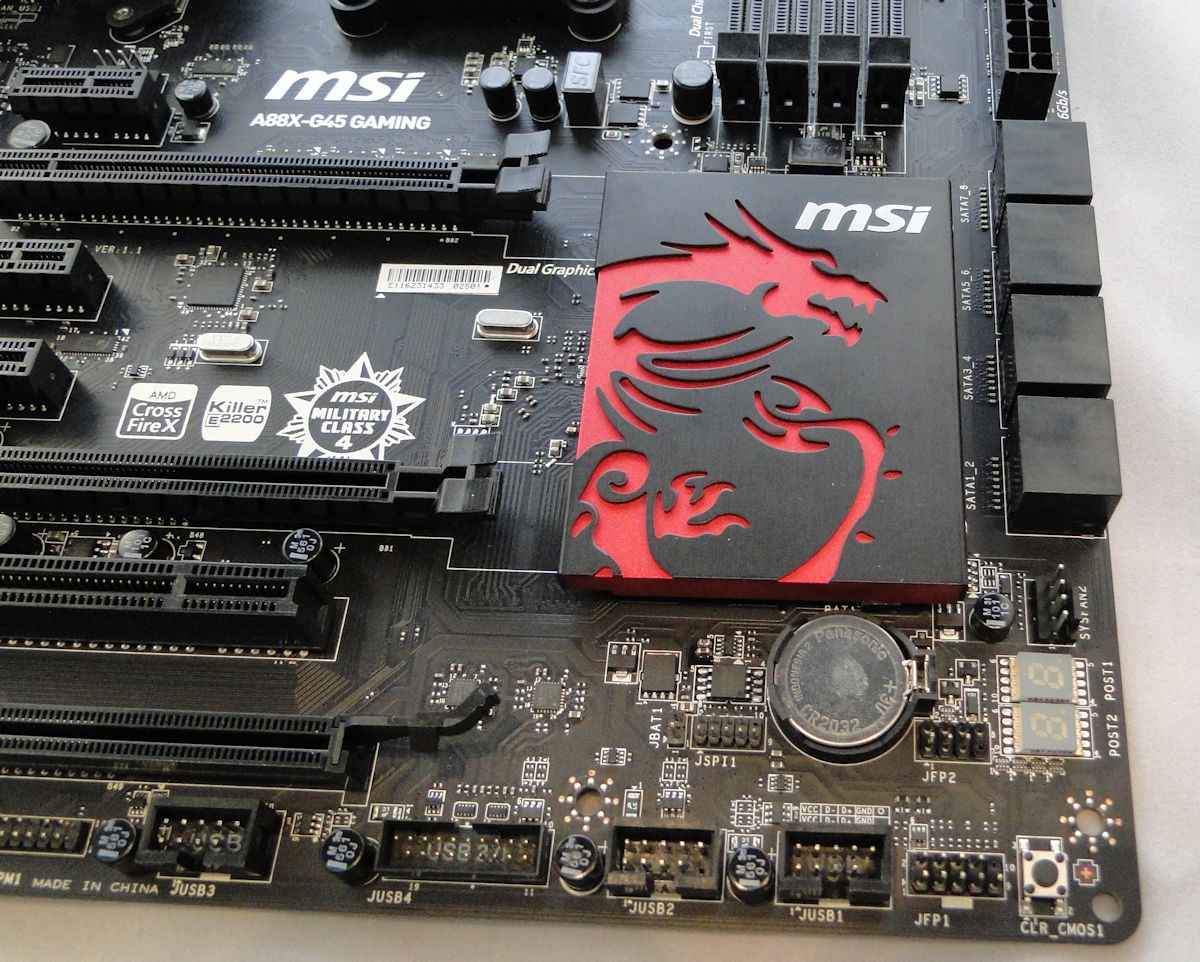 The FCH heatsink is visually striking and MSI make sure that users have as many USB and SATA 6G connections as they could possibly want.

The board features 8 x SATA 6G ports being driven solely by the A88X FCH (Fusion Controller Hub).  The controller performs very well, but still slightly slower than the competing Intel parts on their latest chipsets.  They are still very fast and perform well above the PCI-E based controllers from companies like ASMedia, JMicron, and others.  I think MSI was wise to forego the typical e-SATA ports off of the back of the motherboard and just stick with 8 SATA 6G ports off of the motherboard.  I would imagine very few people purchasing these boards have a use for e-SATA.  I certainly have never used it in my time.

The A88X FCH does provide up to 4 USB 3.0 ports, but MSI figured that was too few.  I tend to agree with MSI.  They utilize the VIA VL805 4 port USB 3.0 controller to make up the deficit.  The four ports off of the back panel are powered by the VIA chip, while the other two and the front panel ports are powered by the built-in AMD controller. 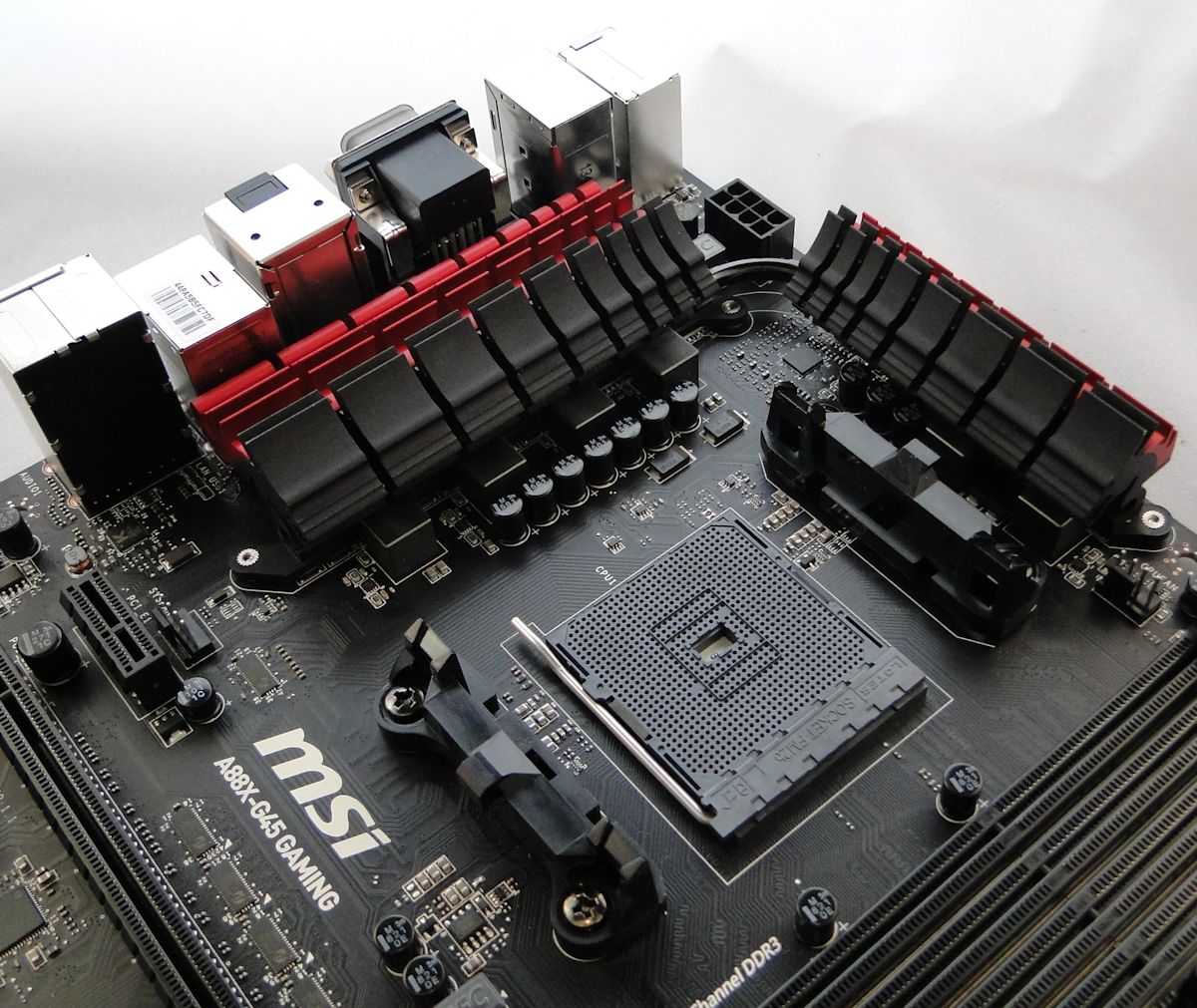 The 4+2 power delivery is not overwhelming the board, but it certainly is solid with this implementation.

The rear panel features DB-15 (VGA), DVI-DL, HDMI, and DisplayPort connections.  Kaveri can push up to three monitors in multiple configurations.  It also has the aforementioned 6 USB 3.0 ports as well as 2 x USB 2.0.  Ethernet, optical sound, and the six audio ports round out this particular configuration.   The board also has a total of five fan headers, three of which support 4-pin connections.

MSI bundles the Control Center software suite that allows low level hardware control as well as a very granular fan control that is actually quite fantastic.  Not all settings can be adjusted by this software due to limitations with the UEFI and how it boots the CPU/APU.  There is a lot of polish to the interface and it provides a solid hardware monitoring suite.  It can do some real-time overclocking, but I again prefer to do that in the BIOS and restart when needed. 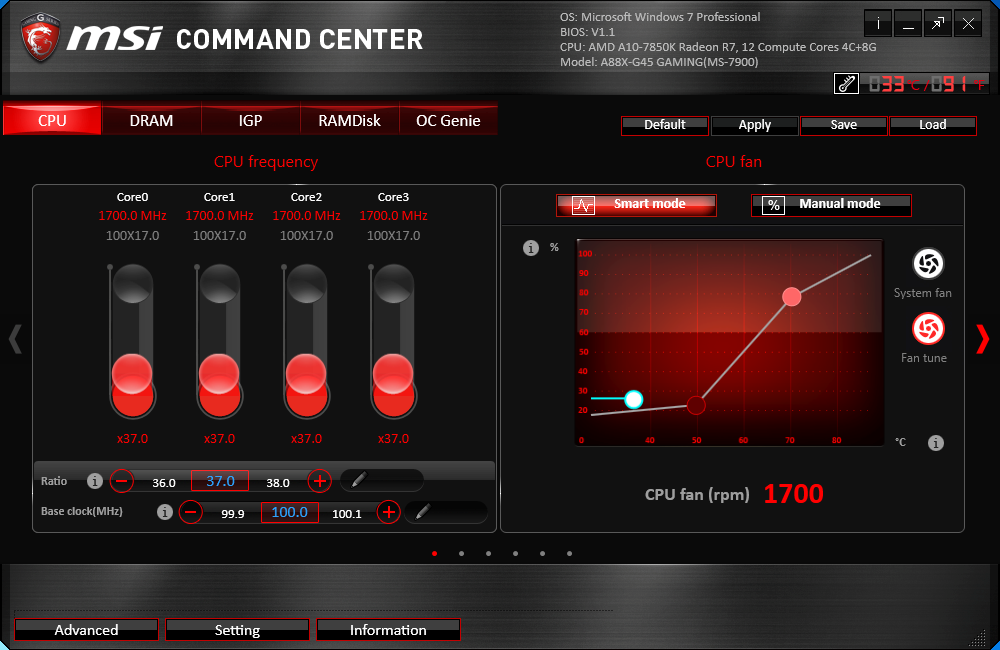 The latest Control Center continues with the visual cues of the Gaming products from MSI.

The overall package is very good and interesting.  The board comes with the new and improved backplate (aluminum shielding, cushioned), a door hanger for when one is gaming and does not want to be disturbed, a fancy case badge that is aesthetically pleasing (and large), the driver disk, SATA cables, and a pretty thick manual which explains the functionality of the board quite nicely.  MSI has done a nice job on the bundle, considering the price that it actually retails at. 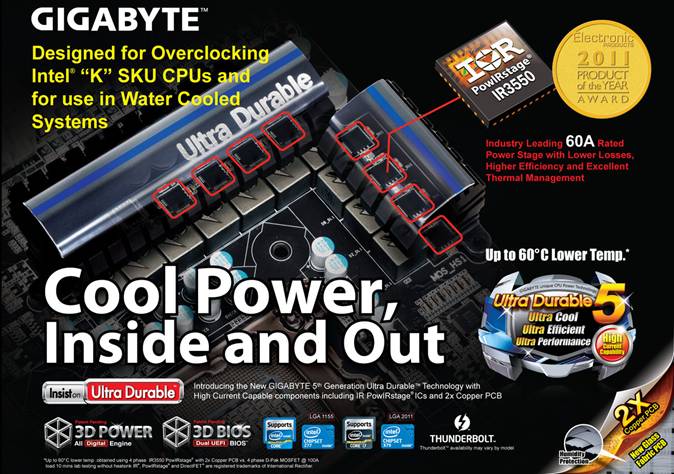