MSI has really hit upon an effective color and design scheme for their Gaming motherboards.  The black and red color motif has been used before, but MSI’s implementation is very subtle and refined.  The red does act as more of an accent as compared to other boards from Asus.  The dragon stencil has a lot of pop as well.  When the board is running we have the diagnostic LED nice and bright, and the line between the audio portion and the rest of the board glows a purplish-red color.  Users with windowed cases could certainly make far worse decisions when it comes to a board that looks like it means business.

The Power/OC/Reset buttons are all present.  Note as well the voltage check points in front of the individual LEDs for the different components.

This particular model is the Assassin’s Creed limited edition.  When they say limited, they are not kidding.  The addition of the HD Assassin’s Creed Liberation title only adds a few dollars to the overall cost of the board, but the bundle is simply not available except for a single overpriced option ($210) found online.  The HD version of this tablet based game is fun enough, but certainly not worth the premium online.

Obviously of great importance is the placement of the firmware battery.  I believe it is located in the most optimal place when it comes to accessibility and aesthetics.  We would not want to get non-traditional when it comes to battery placement!

Component placement and spacing around this board is very, very good.  The power connections are at their respective edges, providing easy cable management.  The eight SATA 6G ports are again placed near the edge and rotated to be parallel to the board.  This does make cable installation a bit tough, but allows for less clutter and easier installation of long graphics cards in both single card and multi-GPU configurations.  The heatsink is again quite sharp looking, but it also has the surface area and thermal density required to keep the FCH running nice and cool.

Display connections abound on the back of this board.  Everything a user could want, except for wireless networking support.

The board does not support SLI at this time, and it is questionable if NVIDIA will license that to AMD and their APUs.  It may eventually happen, but for now the FM2+ boards only support CrossFire.  At least with the Kaveri based A10-7850K, AMD has finally implemented PCI-E 3.0 functionality.  The two slots can be run at x8 speeds, which gives as much bandwidth as 2 x 16 PCI-E 2.0 slots.  If a AMD user must get SLI support, then they need to go to the AM3+ socket and the 990 series of chipsets.

The bundle is above average for boards in this price range.  It has enough extras to make it seem worthwhile for users.  The manual is actually quite good and has an above average amount of pages explaining the different features of the board.  The driver disk is useful, but not nearly as useful as downloading the latest drivers and utilities from the MSI website.

Control Center was a pleasant surprise for me.  I have run quite a few motherboard overclocking and monitoring suites in my time, but the MSI design works really well.  Aesthetically it is quite pleasing, and it provides nearly all the information a user could want.  Some settings simply cannot be changed through this software, as it must be done in the firmware with a reboot directly after to implement these settings (such as memory voltage).  The fan control support is really good through this utility.

Build quality is excellent.  Nothing is falling off of this board, there are no buzzing components, and the wave solder machine was working as expected when this board was pushed through.  The cooling on the VRMs is actually a bit overkill considering it is a 4+2 phase setup, made of the military class components, and powering a sub-100 watt TDP APU.  This is certainly not a 8+2 board like the 990FX-GD80 which can support the 219 watt FX-9000 series of CPUs. 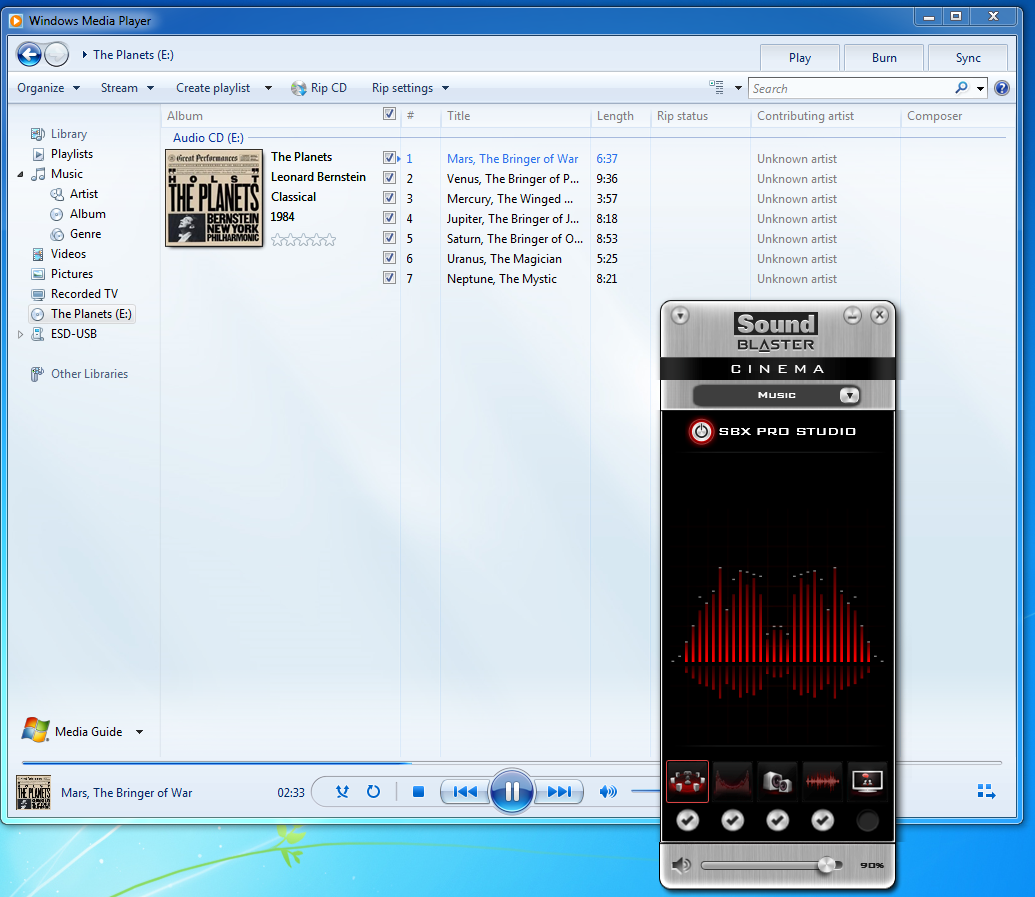 Creative actually did a fair job on the software based Cinema suite.  It makes such classic recordings as this shine.

The eight USB 3.0 ports are also much appreciated.  Having six on the back and two powering the front panel, users should have plenty of ports to plug their devices into.  The default AMD controller is fairly quick here, but it appears as though the VIA controller might be faster.  This seemingly comes at a price.  More details on this will be provided in the results section.

The gold connections on audio and the gaming/USB/PS2 stack are admirable, but it is more marketing than anything.  Yes, you will get longer life on these plugs due to gold not oxidizing and causing electrical resistance.  No, it will not blow a user away by drastically increased audio quality or a reduction in latency afforded by the gold in the gaming connection stack.

Finally we get to the real meat of the matter.  Just like the Gigabyte G1.Sniper.A88X, the A88X-G45 Gaming was designed around high quality audio.  High quality caps, solid codec, good OPAMPs and AMPs, and a software layer provided by Creative to give users more flexibility and functionality with their sound.  This is as good, if not better, than the Gigabyte unit.  If anything, it is not as overdriven as the Gigabyte board seemed to be.  The Creative audio suite is a value added feature for users, and though I do not like the Crystalizer functionality, that is not to say that someone else might not appreciate it.

The sound is very clean and pushed my Grado headphones very nicely.  It did not have some of the pops that the Gigabyte board exhibited when things like the DVD drive drawer was opened.  The front panel audio output was also very clean, though mileage may vary due to the implementation of the wiring on the front audio panel from the case manufacturer.  The SoundBlaster software does allow a lot of manipulation of the sound, so that is a plus in terms of refining the sound to the user’s preferences.  This so far is my most favorite audio implementation on a motherboard.  Users might get slightly better performance from a standalone card, but users certainly are not forced to upgrade their audio to provide a solid and quality experience. 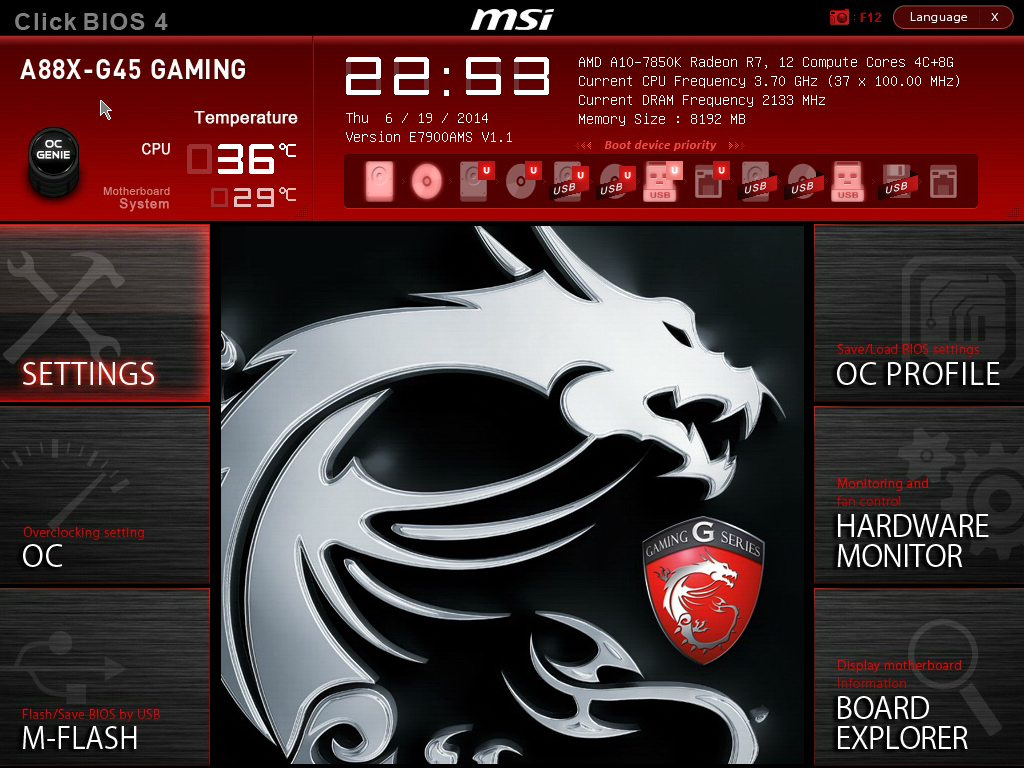 The UEFI design is quite pleasing to the eye, as well as easily navigable.  It provides a lot of information just on the first screen for users.

I was initially disappointed in the 4+2 power setup, but in the overclocking section we will see that my fears were mostly unfounded.  MSI provides a nice design with good component choices which should provide the 95 watt TDP A10-7850K enough clean power to overclock as high as the silicon can go.  The OC Genie button also worked as advertised.  I received a decent overclock with both the stock and Gamer settings.

The firmware is very nicely laid out with plenty of graphical touches.  It is easy to configure and has good explanations of what the different settings do.  Everything is easy to locate and the fan control and flash apps are functional and easy to access and use.

The Killer NIC E2200 controller is essentially just an Atheros Gig-E chip, but it performs very well under a variety of applications.  The hardware that drove previous Killer implementations is no longer there, but the software suite that is included with the hardware is pretty effective in what it does.  It allows users to apply QoS rules to different applications.  It does some analysis of the networking environment that the user is connected to and can adjust settings to provide optimal performance.  While this is nice, if the user is sharing a network with other people who use the internet, the QoS functionality will only affect the usage on this machine.  Still, it is a good implementation that matches the performance and features of high end Intel Gig-E chips.

The four outputs on the back of the board should please pretty much anyone out there.  The latest Kaveri APU can push up to 3 monitors at a time using a combination of ports.  While it certainly does not have the horsepower to push 3 monitors in games, it is more than adequate to function as a multi-monitor solution in standard desktop environments.  The only issue is finding 3 monitors that can accept a variety of inputs.