Kaveri is built to be more power efficient than the previous generations of APUs from AMD.  This comes from a combination of design and process technology.  AMD has also worked quite a few firmware and software tricks to make power go down even more.  The A10-7850K is rated at 95 watts TDP. 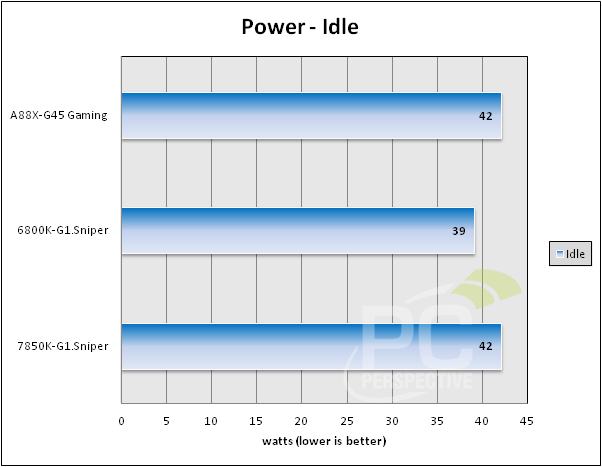 At idle both boards are identical in power draw.  This actually is quite impressive for the MSI board since it does have more hardware on it than the G1.Sniper does.  It is also a larger board with more components overall.  It is nice to see sub-50 watt draws at the wall with desktop parts. 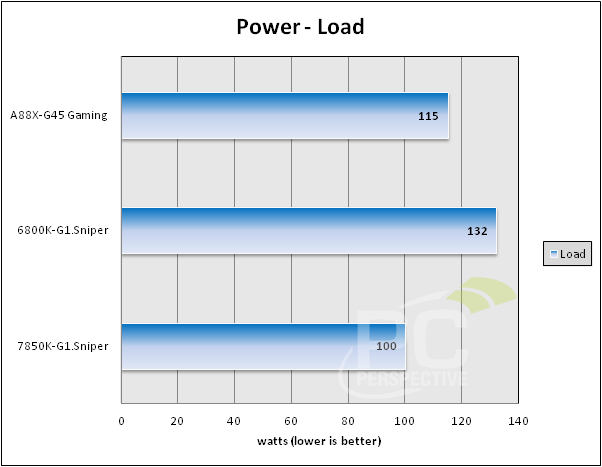 Under load things change up a bit.  The MSI board allows the 7850K to stay in a boosted state for longer, so it does pull more power overall.  15 watts with identical components is pretty significant.  The MSI board is again bigger with more electrical components throughout the board.  In the big scheme of things 15 watts is not a big deal, especially if a user installs a standalone video card with this combination.

There are multiple ways to overclock this particular motherboard.  The customary method of overclocking through the firmware is available.  The firmware also has a setting which will allow automatic overclocking.  Finally we have the OC Genie button on the board that has two modes, one more aggressive than the other. 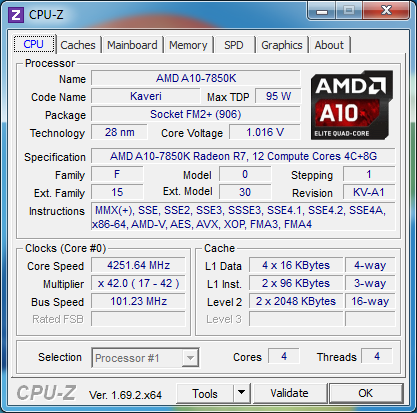 The firmware setting for automatic overclocking did not seem to want to work.  I enabled it through the firmware multiple times, but it refused to boot after that.  The OC Genie button was a bit more successful.  At the base setting the overclock came in at 4.25 GHz (42 x 101.25). The gaming mode gave another extra 100 MHz over the base overclock (4.35 GHz).

Using the traditional method in the firmware and manual settings I was able to get this APU to 4.7 GHz.  This is 100 MHz faster than I was able to get this APU with the Gigabyte board.  The 7850K is not the greatest chip for overclocking, so this was a pretty good result for my particular sample.  I was surprised that the 4+2 power setup was able to achieve this overclock, since it is overall quite similar to what Gigabyte offers with the G1.Sniper.  We will likely see variances from board to board, but in this particular case the board really pushed this APU farther than it had before. 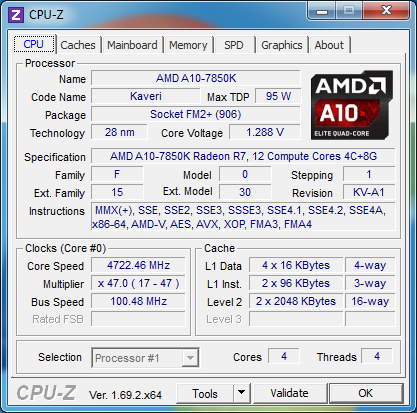 This board still suffers from the same bus speed issues as the previous FM2 parts.  The base clock goes from 100 MHz to 105 MHz without a problem, but once it goes past that then issues with stability crop up.  Things like AHCI become broken.  This is not a huge problem as users do have a little leeway with fine tuning their overclock.  Consider though that the multiplier for the APU is already running at 37x to 42x.  Each MHz jump on the base clock is going to heavily increase the overall clockspeed.  The 5 MHz band that is usable should allow users to fine tune their overclock.