NVIDIA bills the SHIELD Tablet as the "tablet for gamers" and that can be a tough stance to take if you just glance at the world of Android gaming today. Yes, Android gaming is gaining in popularity, but all of our indications show that the ability for software makers to turn a profit is even tougher than it is on iOS. If we look at this tablet as a gaming device for Android specifically, what does NVIDIA offer?

Well first, the controller and performance are second to none. Tegra K1 is clearly the fastest mobile GPU available today and any game that can bottleneck the GPU on today's SoCs will find the K1 a welcome addition to the market. The SHIELD Controller also holds a place above basically every Bluetooth controller I have used on a PC or mobile device.

But a quick look at the Google Play Store's games section shows a bunch of copies, too many Minecraft clones, and more zombies than you know what to do with. The quality of games in the Android market is a big problem and NVIDIA is trying to address that with the SHIELD Hub (previously TegraZone). Accessed by hitting the SHIELD button on the controller, or through the dedicated icon on the tablet itself, this portal attempts to filter games that have a bit higher quality standard and gives you an idea about the controller support as well. NVIDIA still has the control mapping software for the SHIELD Tablet (and it works quite well) but for Android gaming to take off, it needs to work out of the box, and NVIDIA is trying to promote that and work with developers to stream line it. 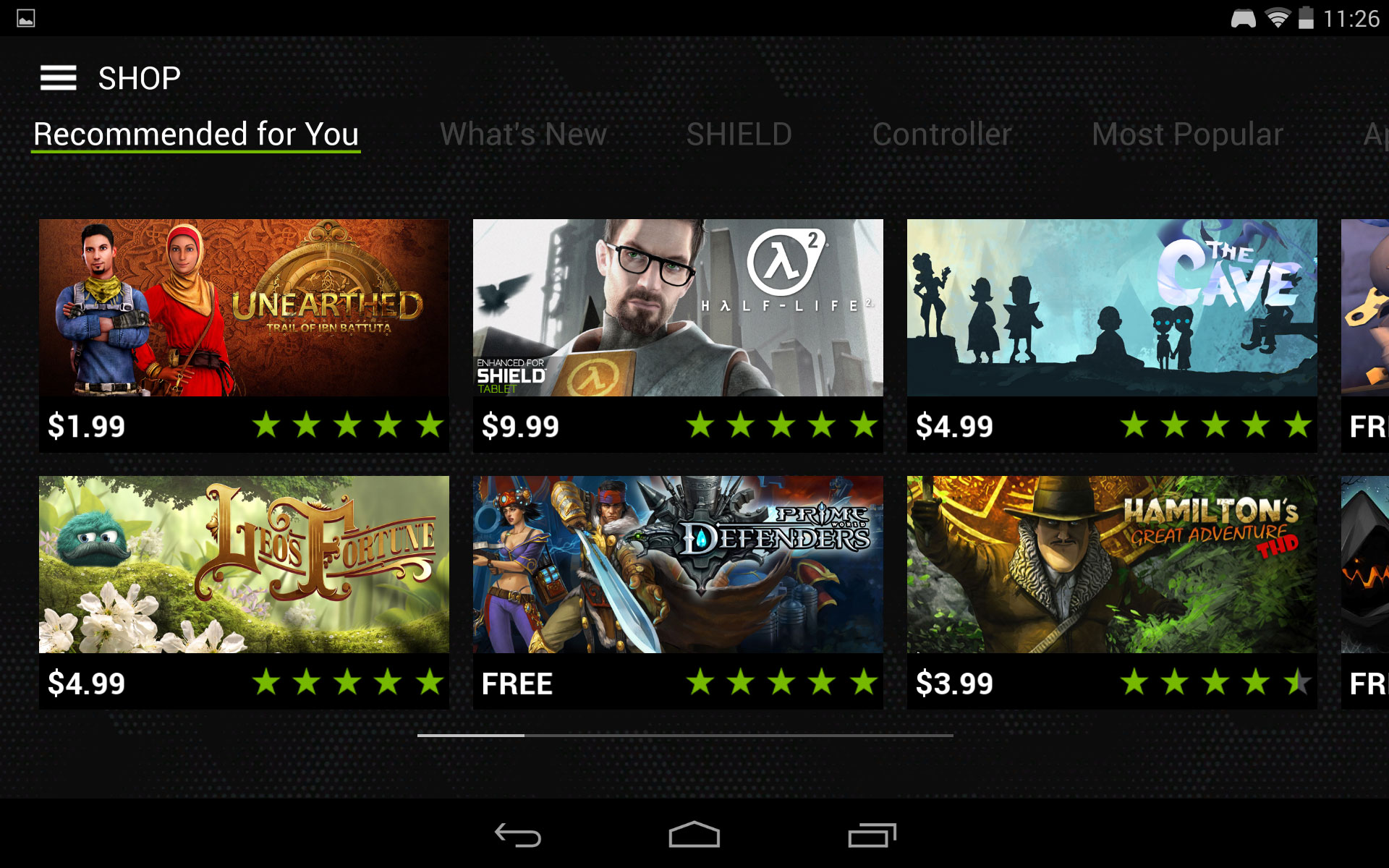 Games like Grand Theft Auto: San Andreas, Dead Trigger 2, and The Walking Dead are native Android games that work great on the SHIELD Tablet and play better with the SHIELD Controller. But perhaps more important is the initiative NVIDIA is taking to push developers to build games that utilize OpenGL for native Tegra K1 support. 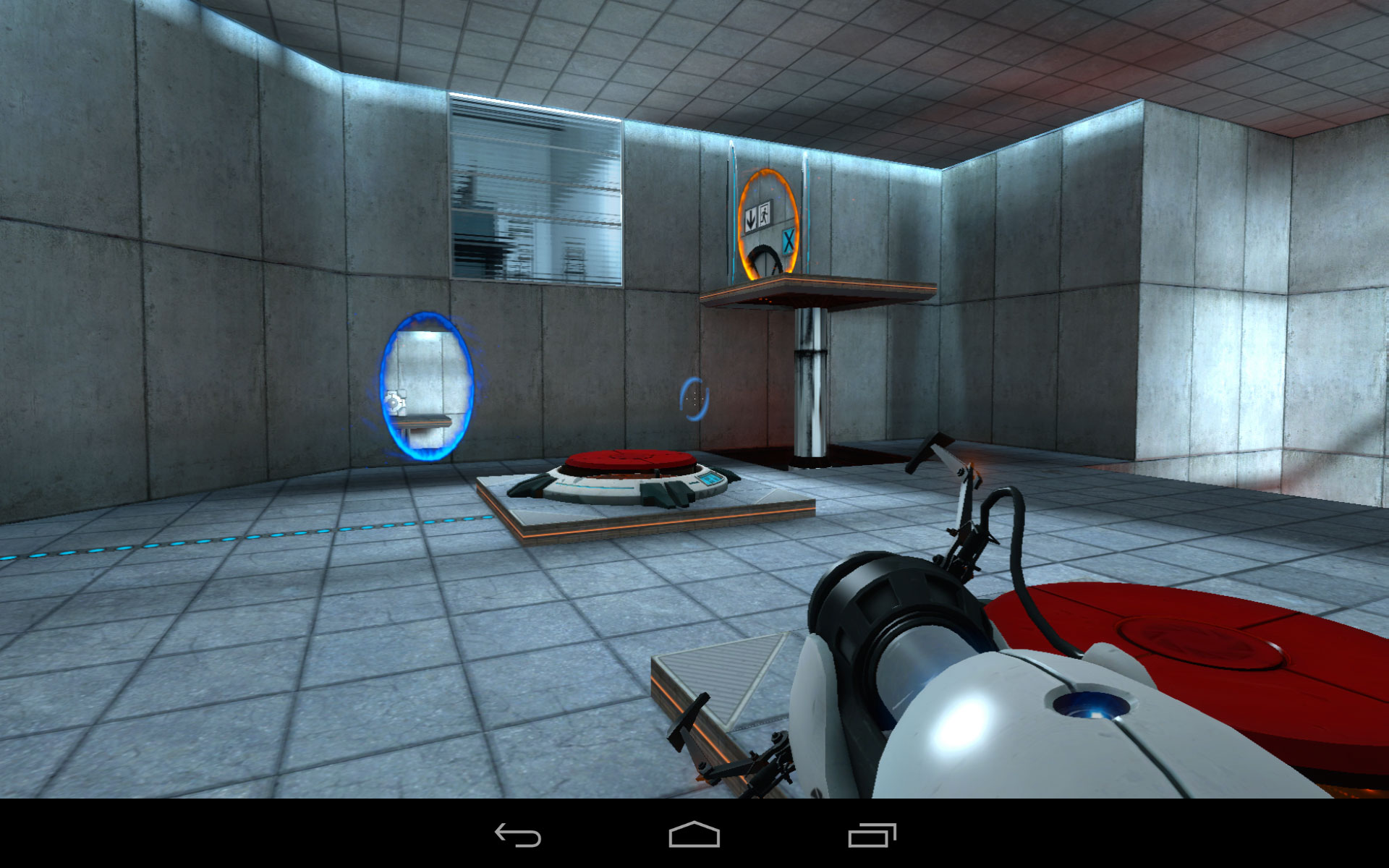 When Portal and Half-Life 2 were released for the original SHIELD this year, it was a port that NVIDIA developed to bring those games to OpenGL ES, a slightly limited mobile version of the graphics API. For the Tegra K1, NVIDIA built a version of both games that uses the full OpenGL API and the graphical differences are immediately noticeable. I played through the entirety of Portal on the SHIELD Tablet this past weekend (on my TV) and was thoroughly impressed with the quality and simplicity it offered. The experience was great and rivaled a dedicated console or playing it on my PC with a controller. 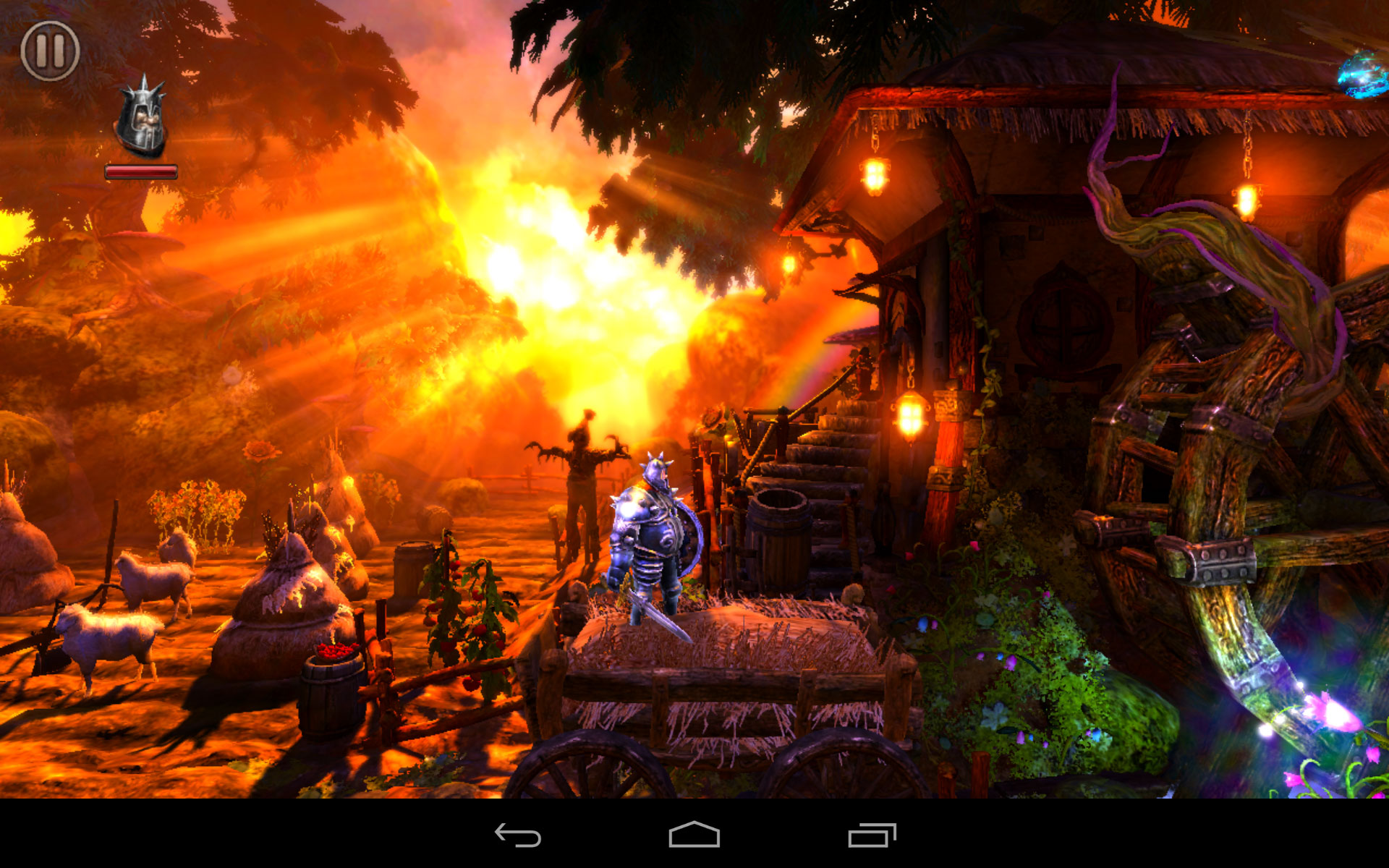 There are other games available as well – Trine 2, Half-Life 2, War Thunder, The Talos Principle.  The problem is that there just aren't enough of them yet! Yes, Trine 2 and Portal were great during my testing period and I am super excited to try out War Thunder, but NVIDIA needs MORE developers to sign and more games to be available that can both show the power of the Tegra K1 SoC but also validate Android as a source of quality gaming. My talks with gaming media in the last week indicate there is a lot of doubt around the capability for NVIDIA to push the Android gaming ecosystem forward fast enough to make the SHIELD family successful.

If Portal and Trine 2 are any indication that NVIDIA has the ability to create another "console" for the marketplace, the company has a shot.

Another feature that makes the SHIELD Tablet the best tablet for gamers is NVIDIA Game Stream. This is the ability to stream your PC games (over both local network and outside the home) to your SHIELD device, allowing you to access essentially your entire Steam library from anywhere. We have discussed and tested Game Stream many times, and the experience continues to improve and impress. 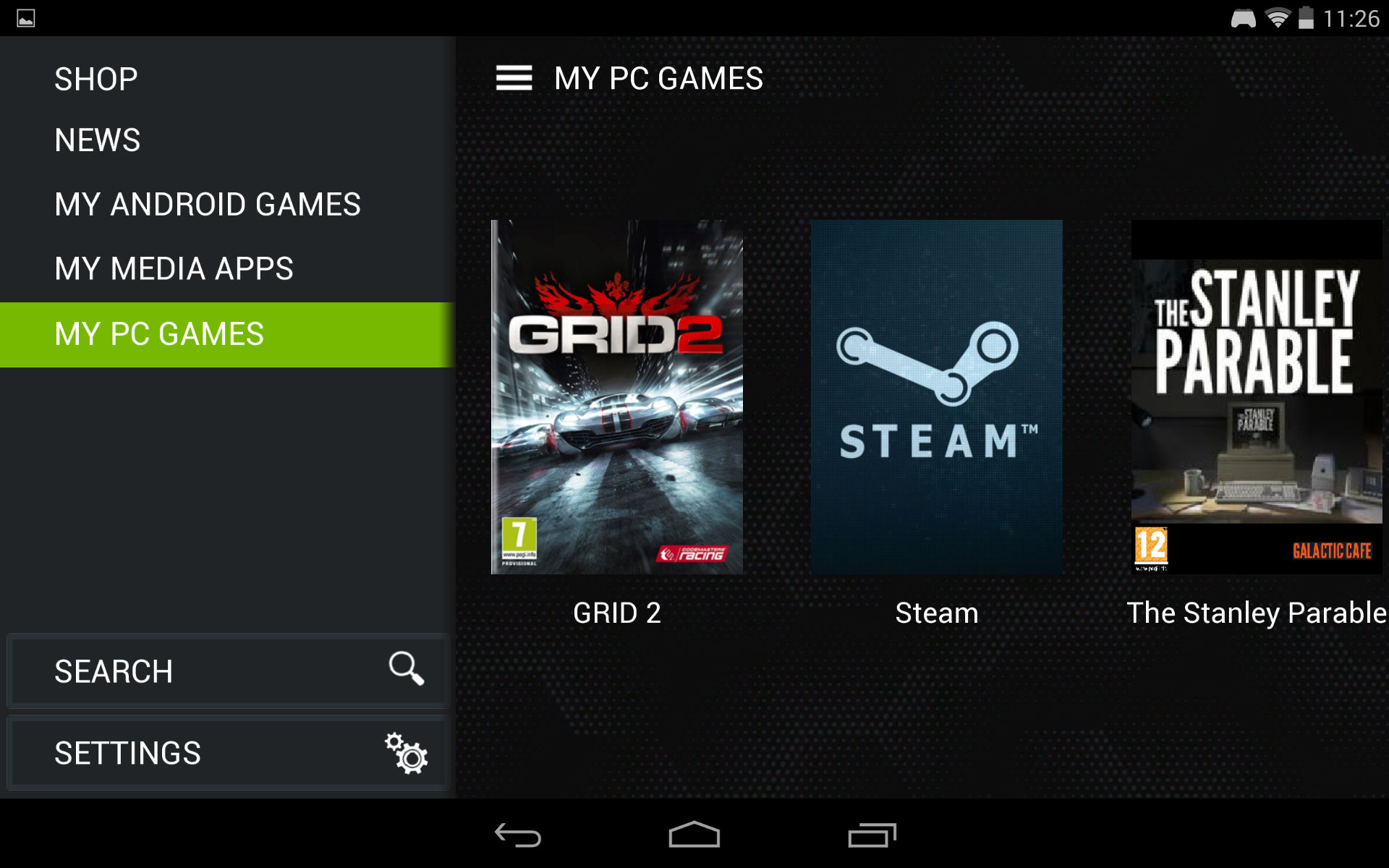 In my week with the SHIELD Tablet, I was able to play some GRID 2 as well as several hours of Wolfenstein: The New Order from my gaming PC upstairs, to the tablet and onto my TV. The experience was solid and I really did not feel like I was being cheated by lag or latency from the streaming process. You will need a high quality network and router for this work optimally and without it you will see quality degradation and stuttering. This happened at my office where we have HEAVY overlapped wireless networks.

Perhaps the most useful way of taking advantage of the tablet for gaming in the home is not use its screen at all, and to instead, connect it to a TV with the device in console mode. In this way, you'll be able to play your Android games, or your Game Stream games on your big screen and use the SHIELD controller from the couch. You can actually use any Android application in this way, including Netflix, YouTube, Chrome, etc. and get a 10-ft user experience. With the controller support built into the OS and the touchpad for those rare use cases when needed, the experience, again, is damned good. 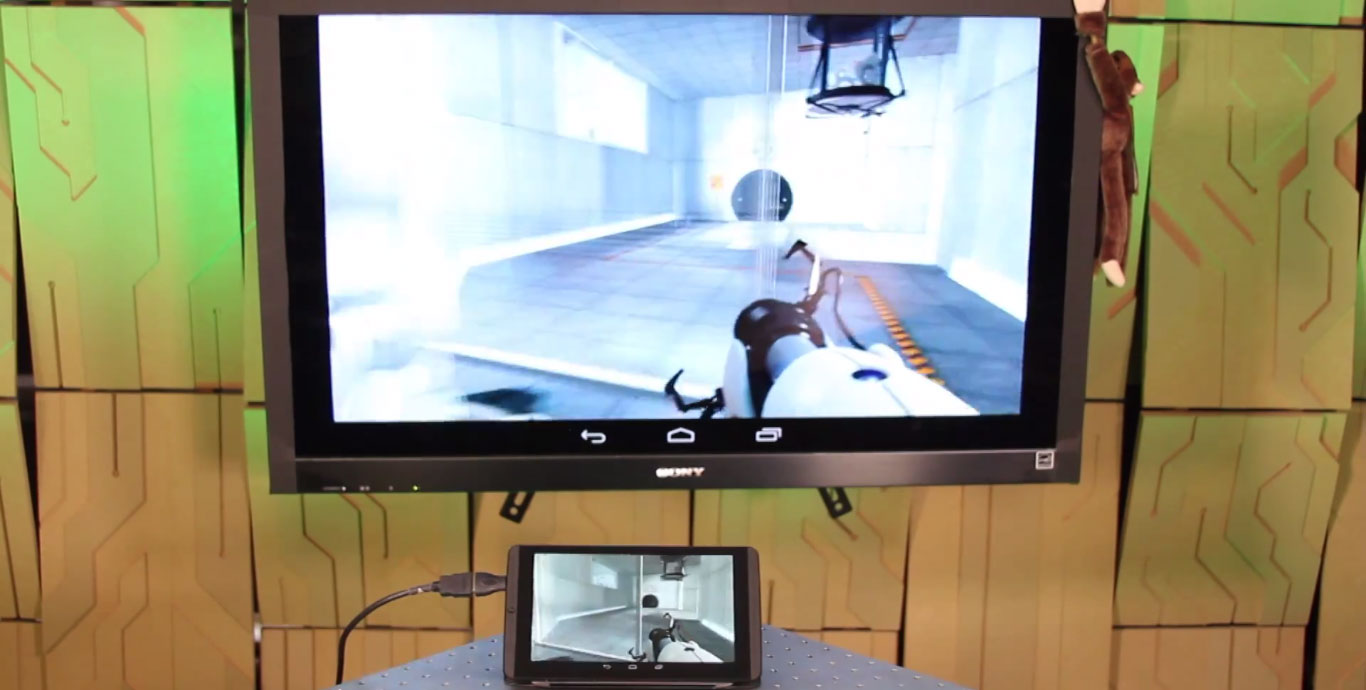 The term "console mode" offers up an interesting angle on the SHIELD Tablet design. Without a design win in the current generation of gaming consoles (Xbox One, PS4, Wii U all use AMD GPU hardware), NVIDIA looks like it is attempting to create its own "console" with a combination of the Tegra K1, the Android OS and Game Stream technology. It has a compelling package, but without the weight of a million gamer (or more) install base, the road is an uphill one to convince developers to spend the time here.

Maybe the most surprising addition to the SHIELD Tablet was the inclusion of Twitch streaming support and ShadowPlay game recording functionality. By simply holding down the back button on the controller or tablet a few seconds, a pop up menu will appear that enables you start streaming your gameplay to Twitch, enable automatic recording, start a manual recording, or take screenshots. 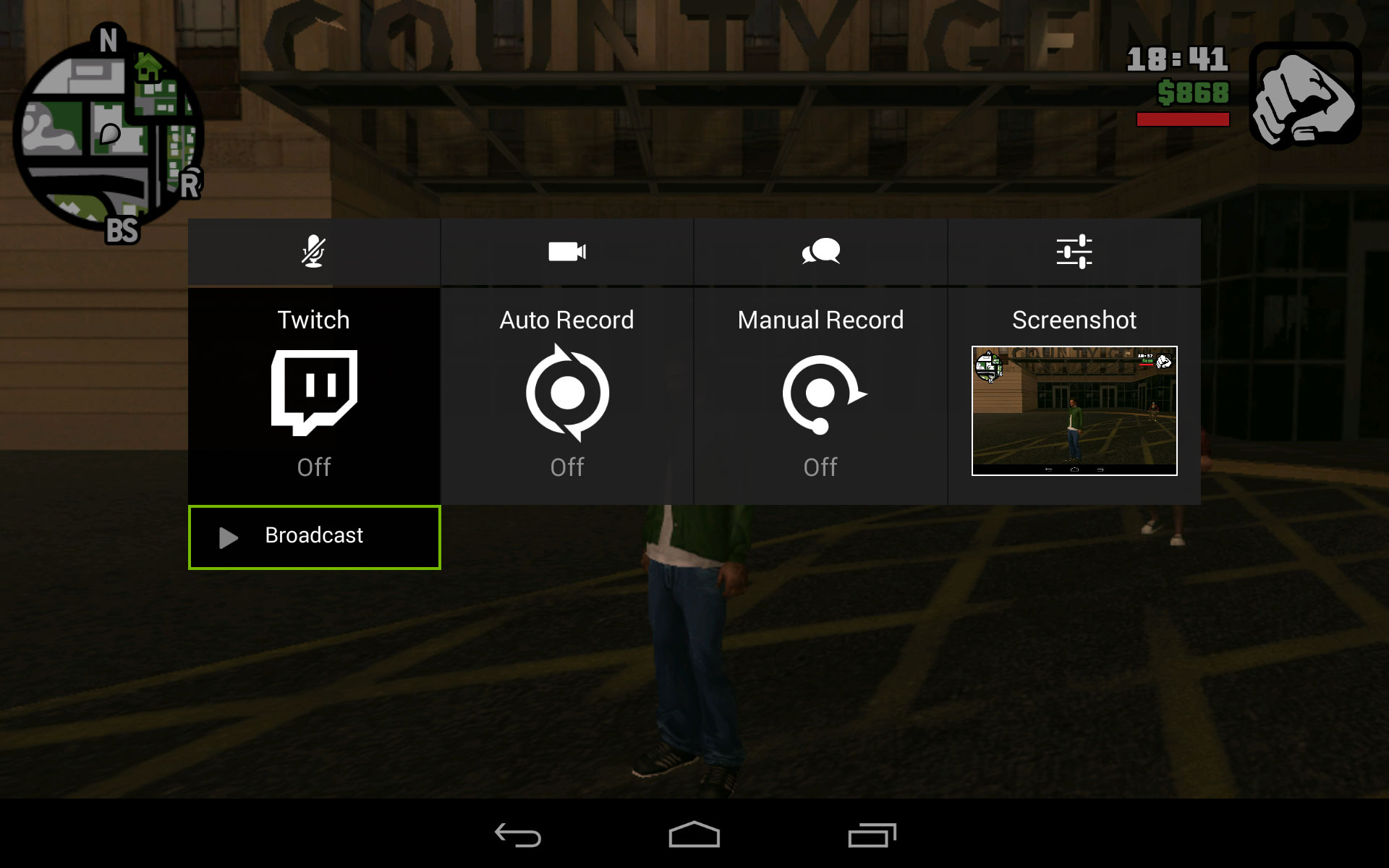 The Twitch functionality is impressive. Not only can you stream your game out to the world, or basically anything in the Android OS, but you can also overlay the front facing camera to it and even put the Twitch chat on YOUR screen, so you can see what the audience is saying to you (or about you). You can arrange or resize these features and even though I haven't done much Twitch streaming personally through GeForce Experience, the integration in Android is pretty damn cool.

The rabbit hole goes deeper. At our office, we tested the following configuration: playing GRID 2 through Game Stream to our tablet, with the tablet connected to a TV in console mode, with Twitch streaming enabled, with my video and chat overlayed, all while recording locally as well. Oh, and my microphone was being sent to Twitch, as well, via the audio port on the controller. It was an impressive sight to see, and made even more so by the fact it was running on an NVIDIA Tegra K1 mobile SoC. 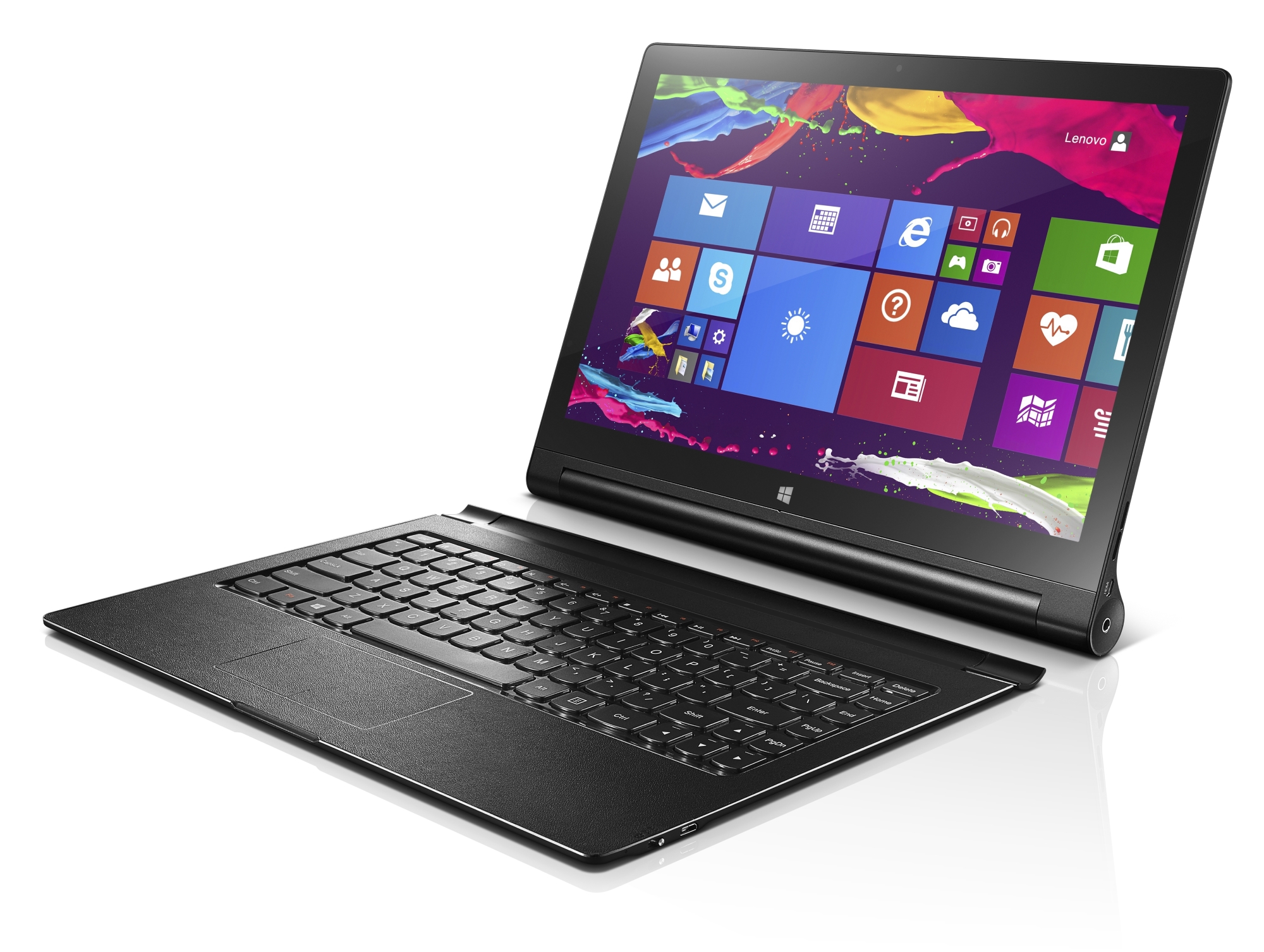 Coming soon to a lap near you; in life like 3D!