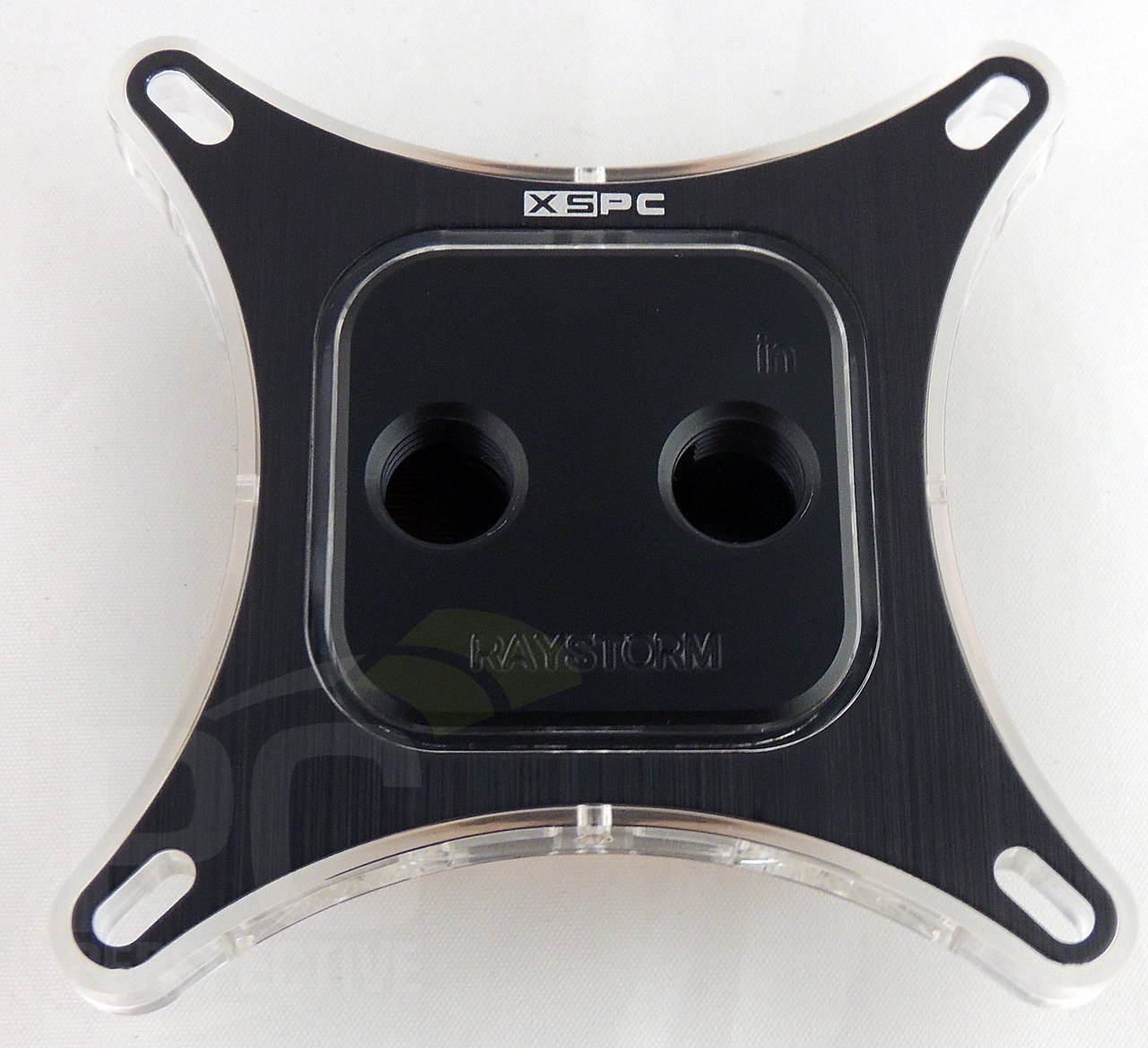 The XSPC Raystorm CPU water block is a multi-layered design consisting of an aluminum and acrylic mounting bracket and the acrylic and copper block assembly. The Intel top plate shown has a black-colored brushed aluminum faceplate, giving the block a sleek appearance as well as protecting the acrylic layer from scratches and damage from the mounting components. The aluminum layer further aids in dispersing light from LEDs that can be placed in the four sides of the acrylic layer for an edge-lit effect. The holes in the middle of the acrylic bracket accepts 3mm LEDs for lighting. The inlet and outlet ports are embedded in the block's acrylic top cover. Note that the inlet port is the port on the right side of the block marked with the word "in". 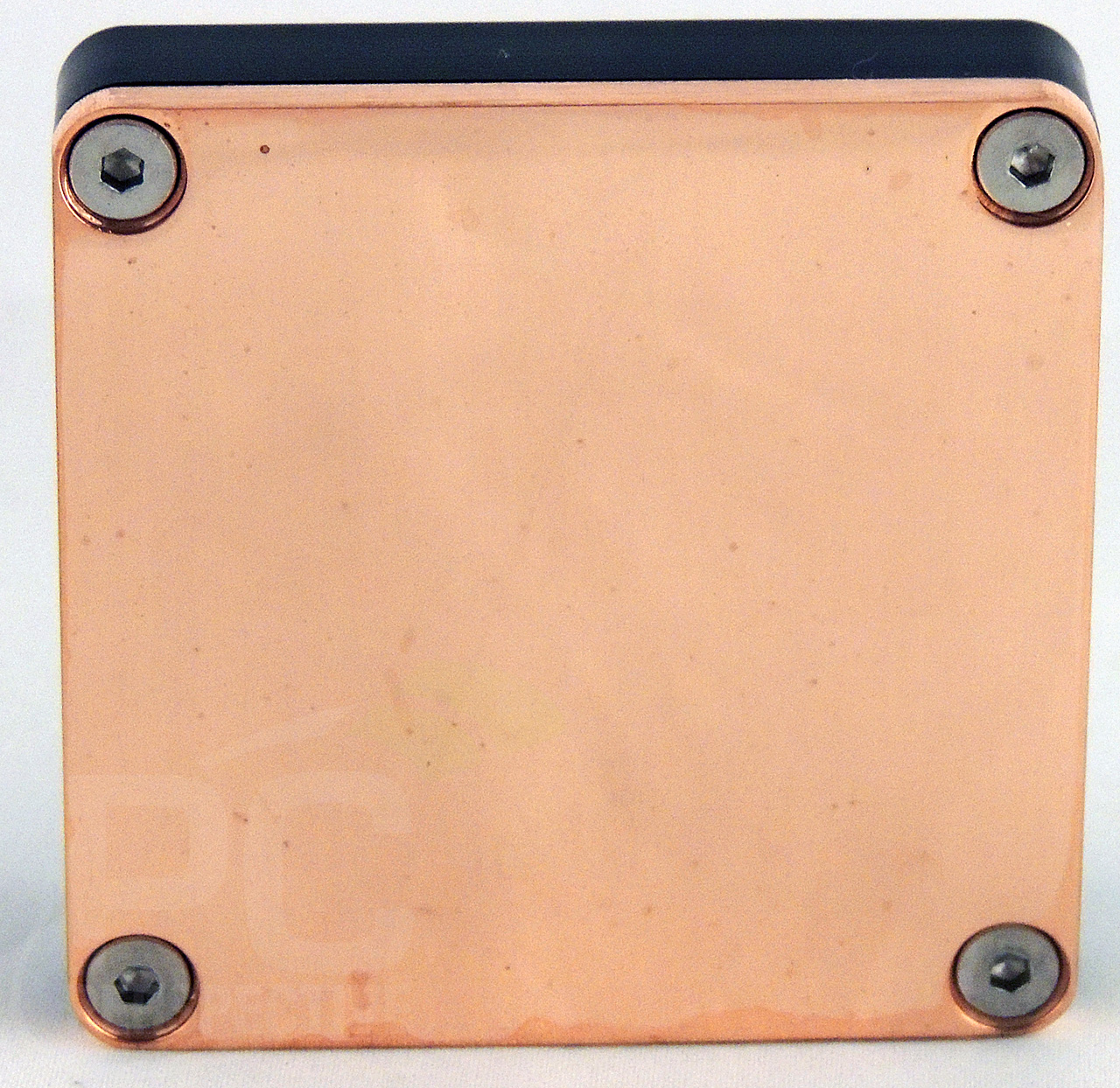 The Raystorm's bottom is a cleanly machined copper plate, polished to a mirror-like finish. There was no evidence of machining marks in the surface of the review sample, making for a better mating surface with the CPU. The copper block is secured to the acrylic top via the four steel hex crews in the corners of the base plate. The screws fit perfectly into embedded surface indentions so they do not hamper the block to CPU surface mating. 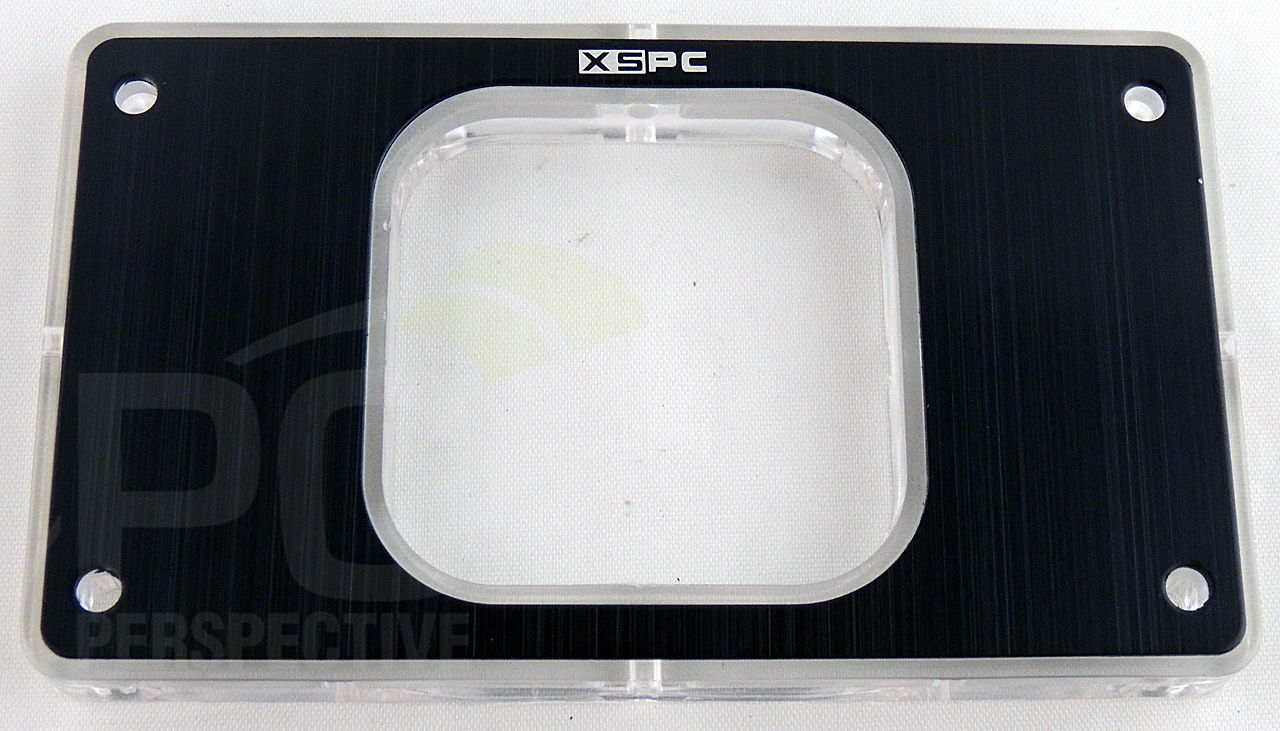 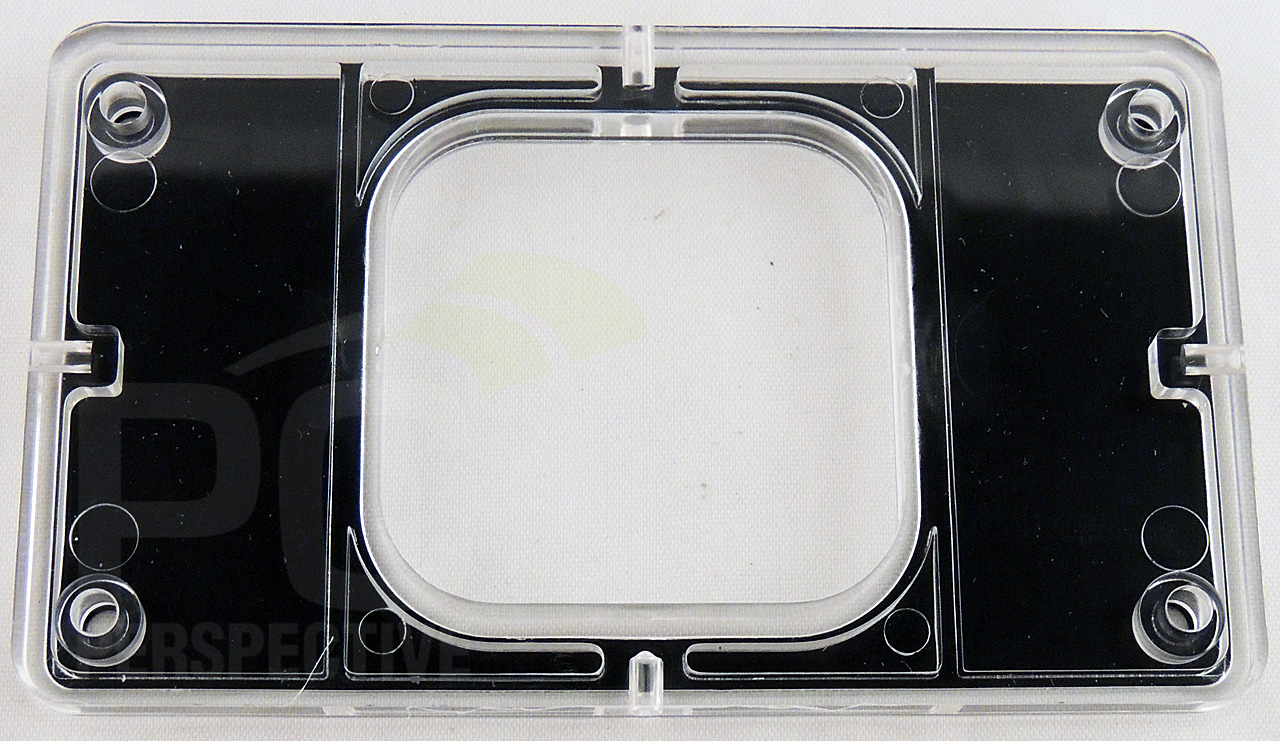 The kit also comes with an AMD mounting bracket, similar in design to the Intel bracket, consisting of an acrylic body with an black brushed-aluminum faceplate. The AMD bracket also has four 3mm LED holes on the sides of the bracket. 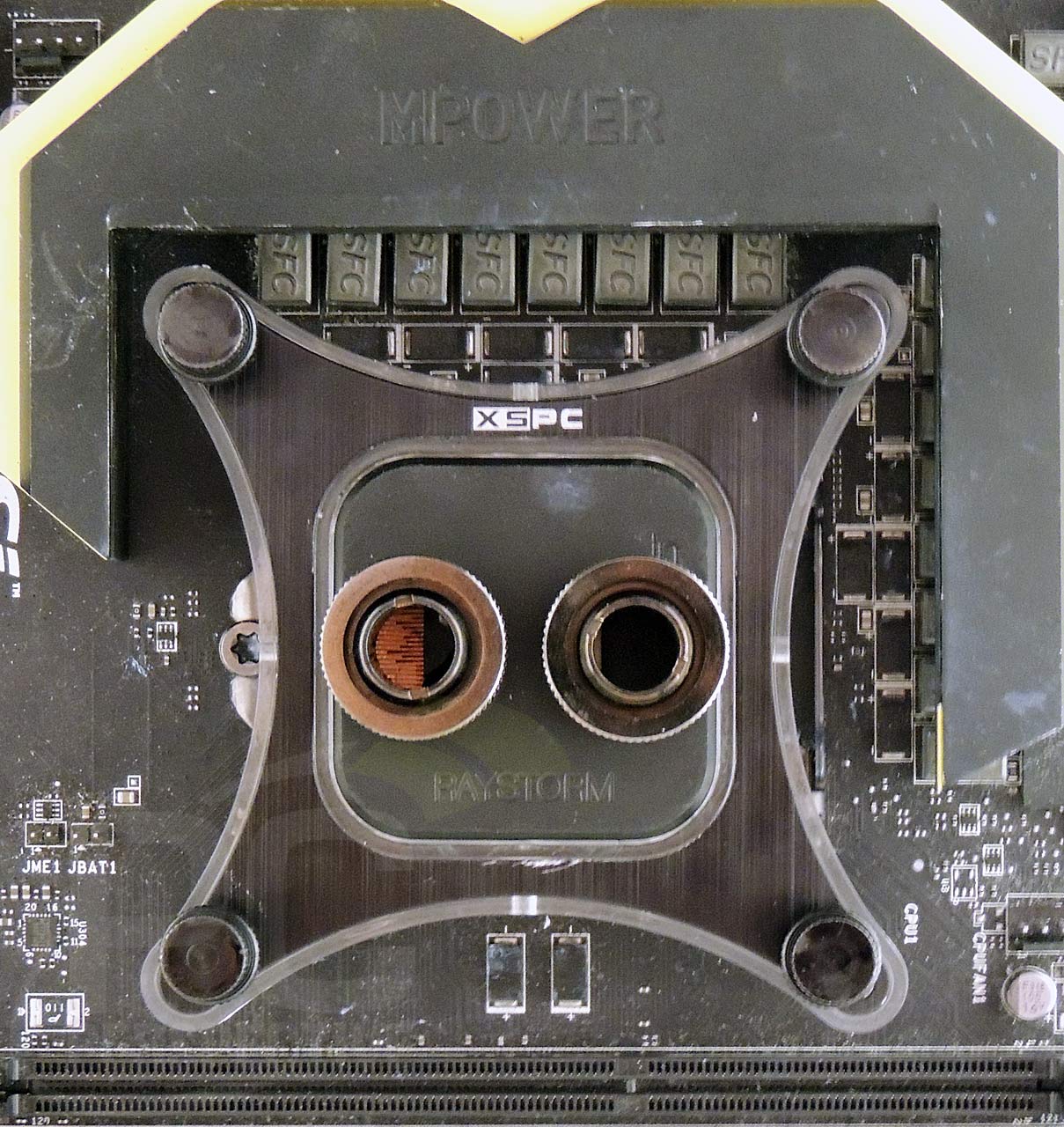 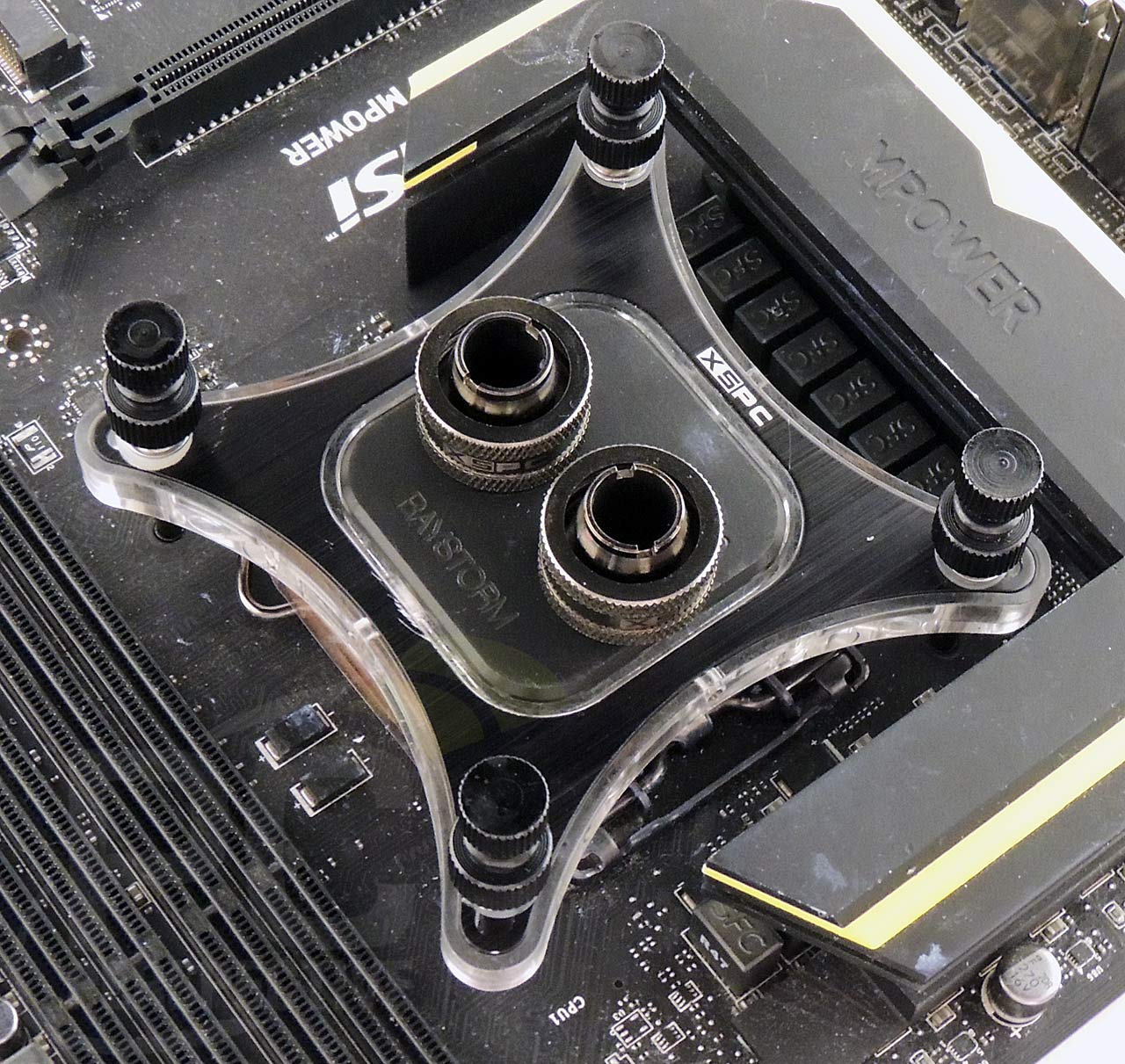 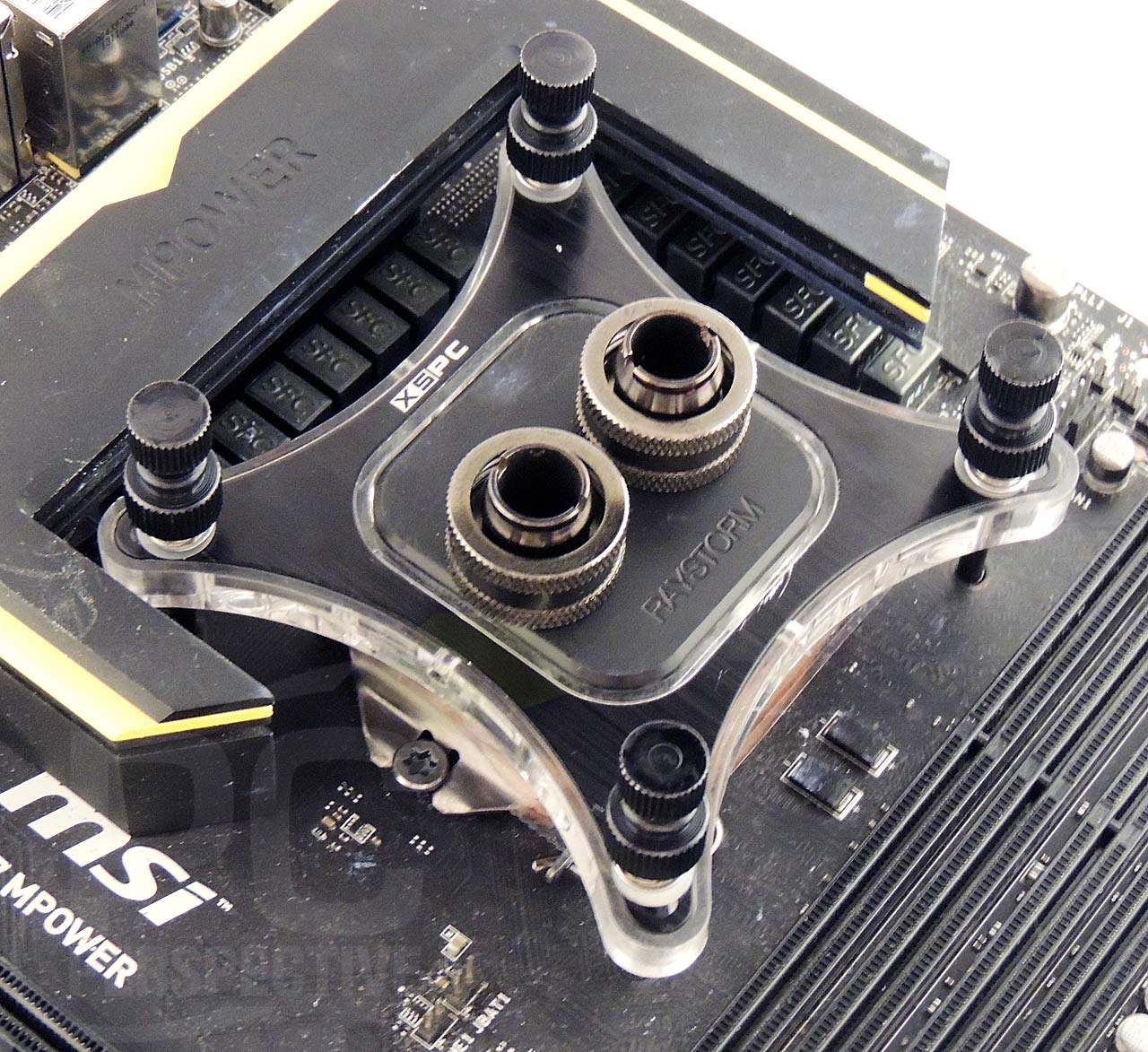 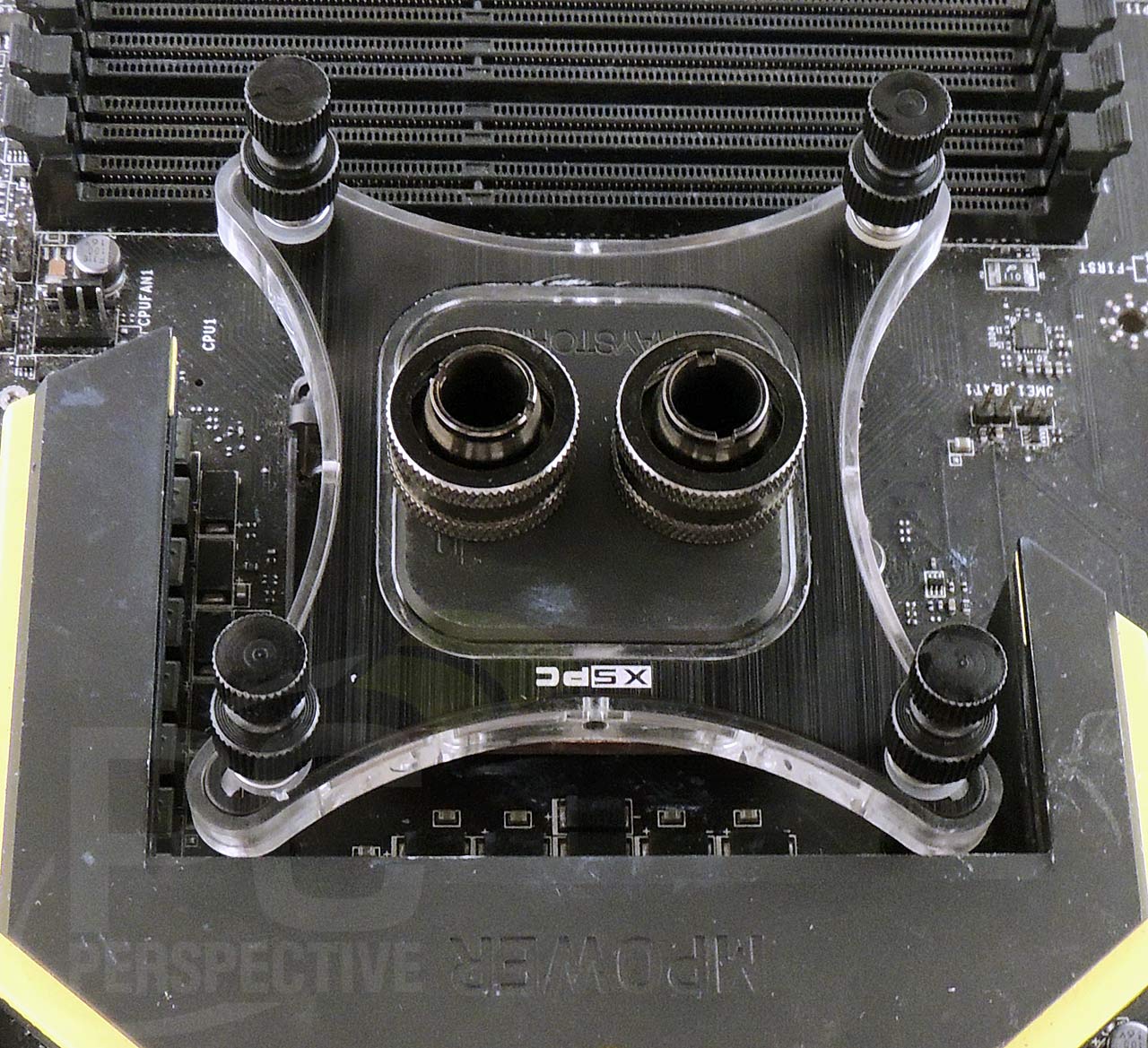 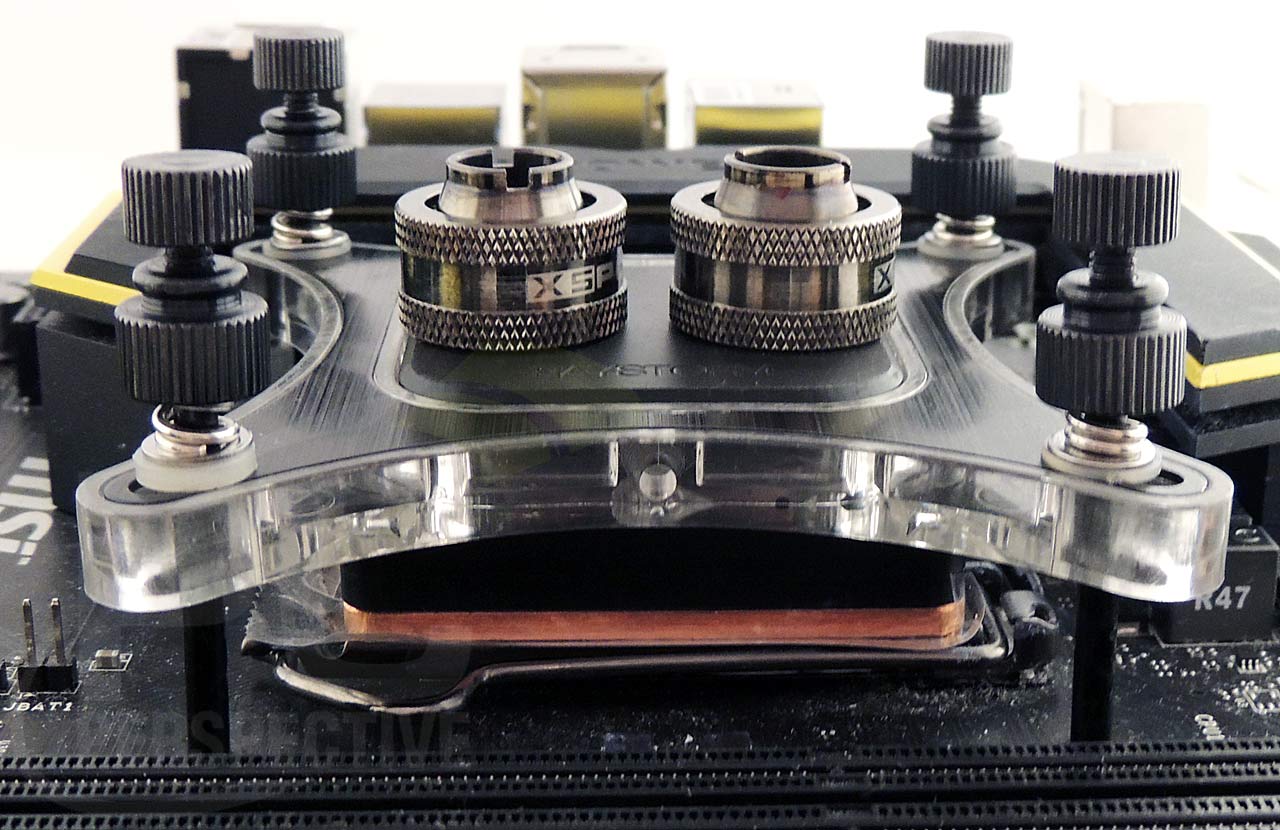 As shown mounted to a Z87-style motherboard, the XSPC Raystorm block fits without issue in the space provided. The MSI Z87 MPower board was used because of its larger than average three-sided VRM cooler. If a cooler can fit without issue on that board, it will fit on most other Intel LGA115X socketed boards. 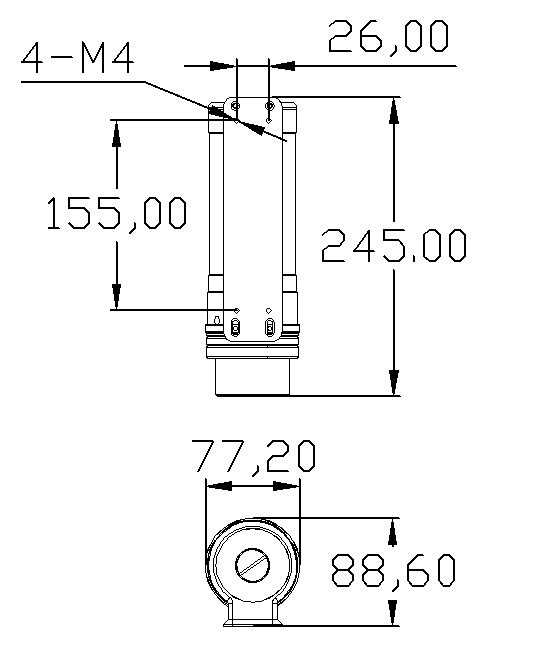 The D5 Photon Tube reservoir is a glass tube-based reservoir with a 77mm diameter (approximately 3 inches) with an integrated D5 Vario pump at the bottom of the unit. The reservoir can hold 410mL of fluid (a little less than a quart of fluid), which is direct fed into the pump inlet chamber. The reservoir is mounted to a movable aluminum mount bar, allow for vertical or horizontal reservoir mounting. Further, the reservoir can free-stand on the mount bar in a horizontal orientation if desired. At the reservoir's center is a solid glass tube embossed with the XSPC logo. With an LED placed in the base of the unit, the glass tube emits a soft glow over its length with the logo clearly visible. The reservoir glass chamber is sandwiched by Acetal end caps. The end caps are factory installed and sealed to ensure leak-free reservoir operation. 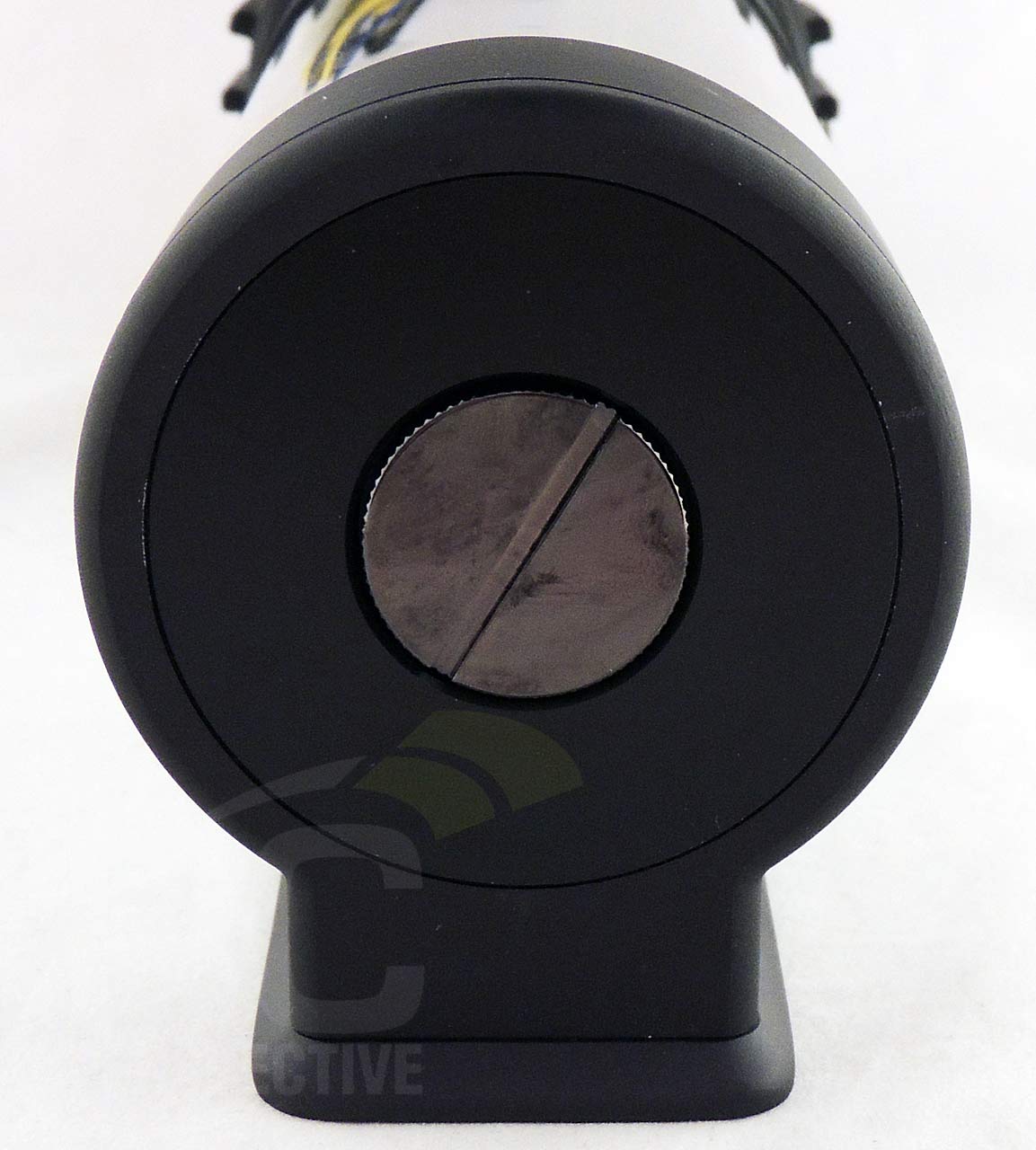 The top of the reservoir has an integrated threaded M20 fill port with metal port cap. XSPC offers an M20 to G1/4" adapter that can be used to convert the fill port to an inlet port if desired. 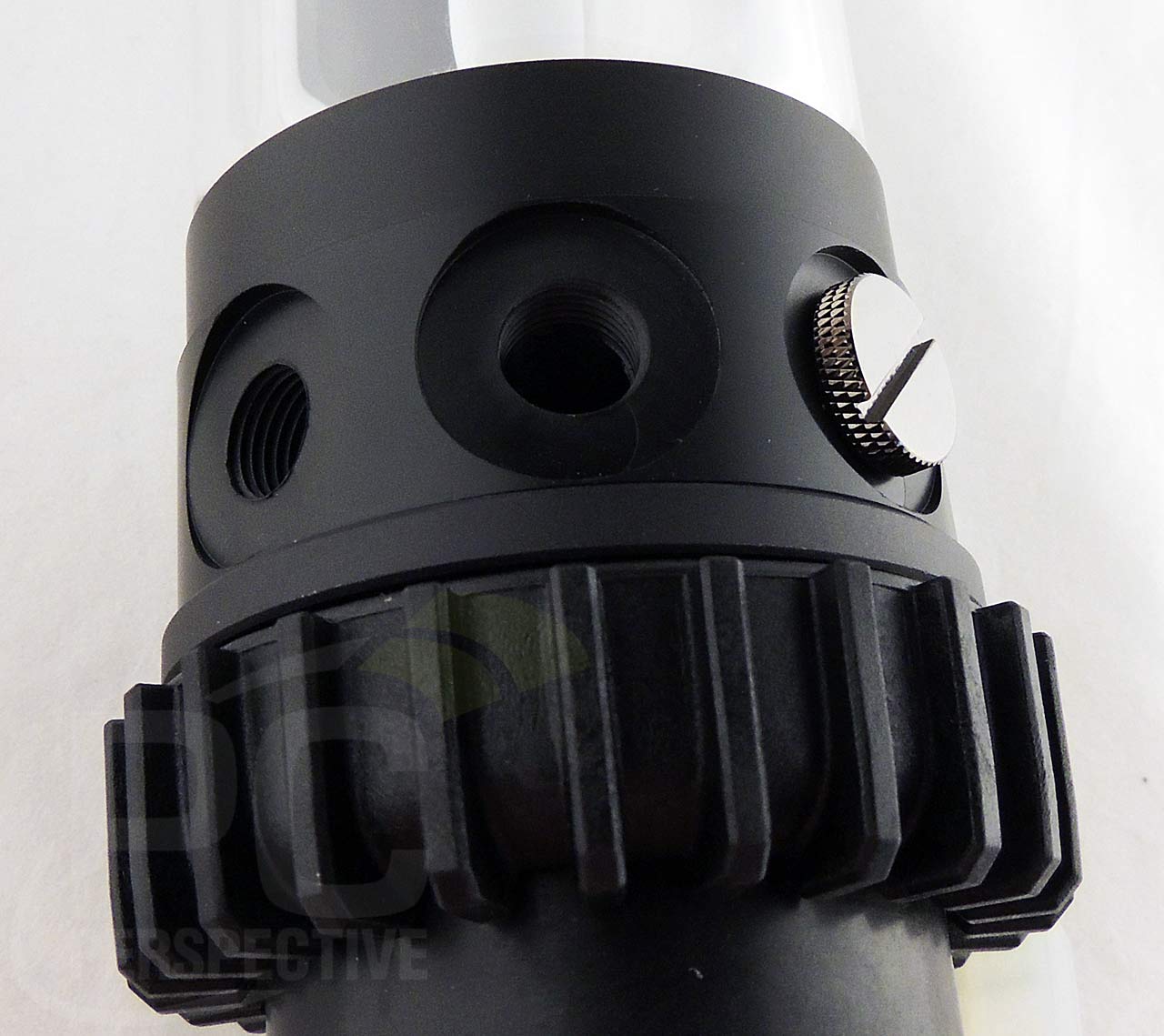 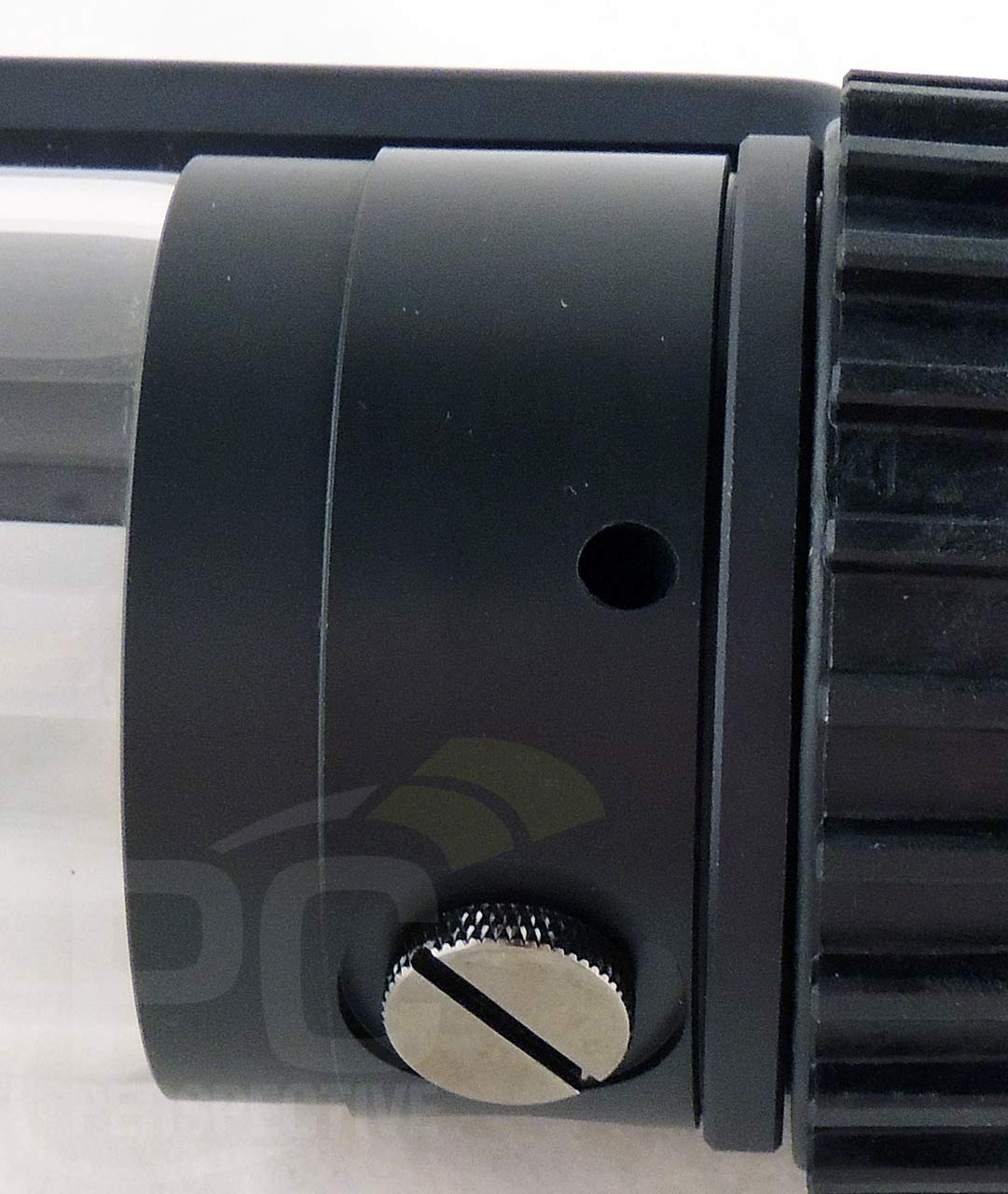 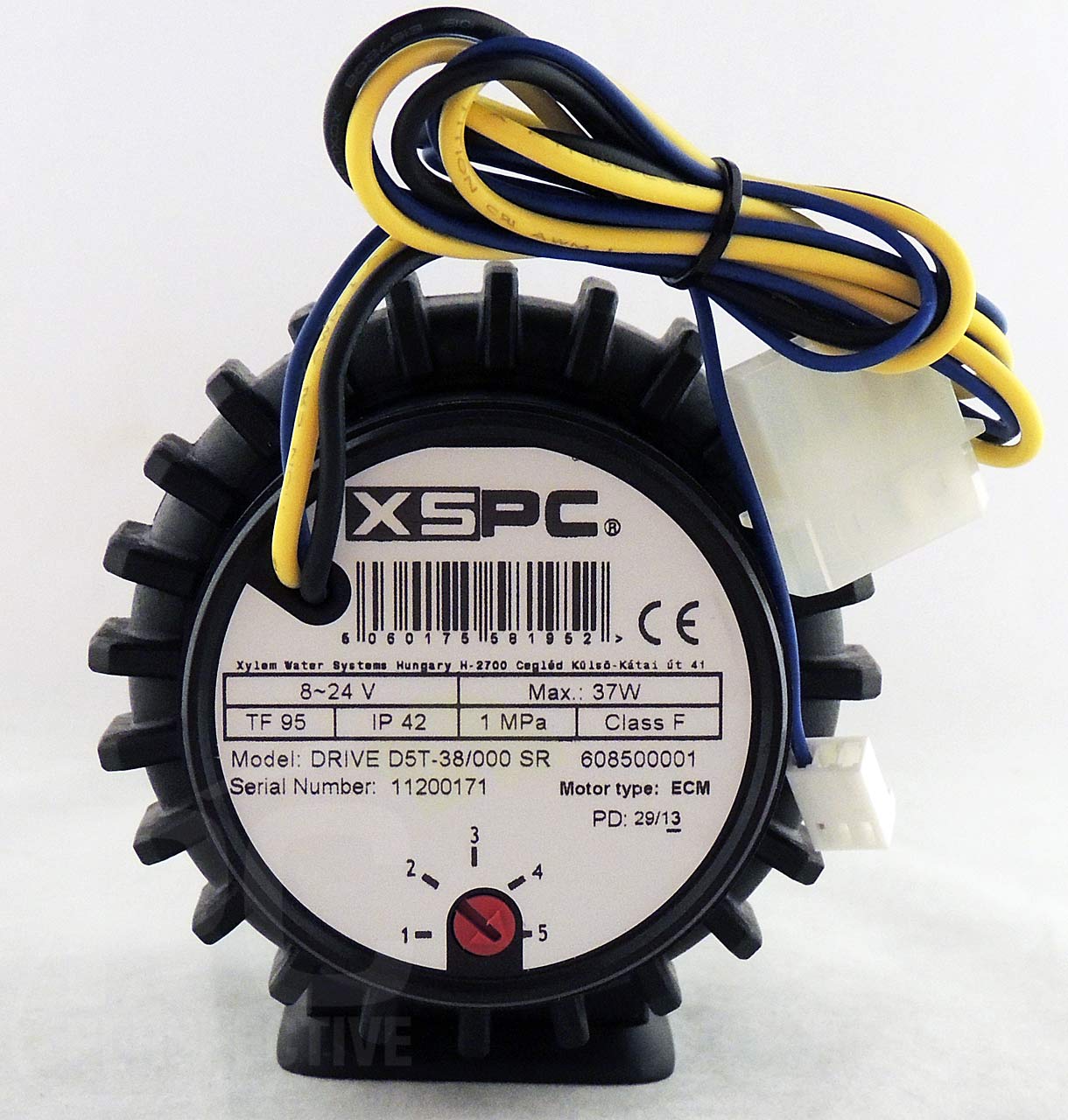 The D5 Vario pump is located in the bottom of the Photon reservoir unit, held to the reservoir by a large ribbed-plastic compression screw. The pump is powered via a 4-pin MOLEX power connector with a 3-pin fan connector included to enabled pump RPM monitoring via a motherboard BIOS header. The pump base contains a variable speed switch labeled 1 to 5 with 5 causing the pump to run at full speed. The speed dial can be turned using a small flat-head screwdriver. Be very careful when using the dial because it is fragile and will break if too much force is applied. The dial assembly is easily replaced with some effort though. 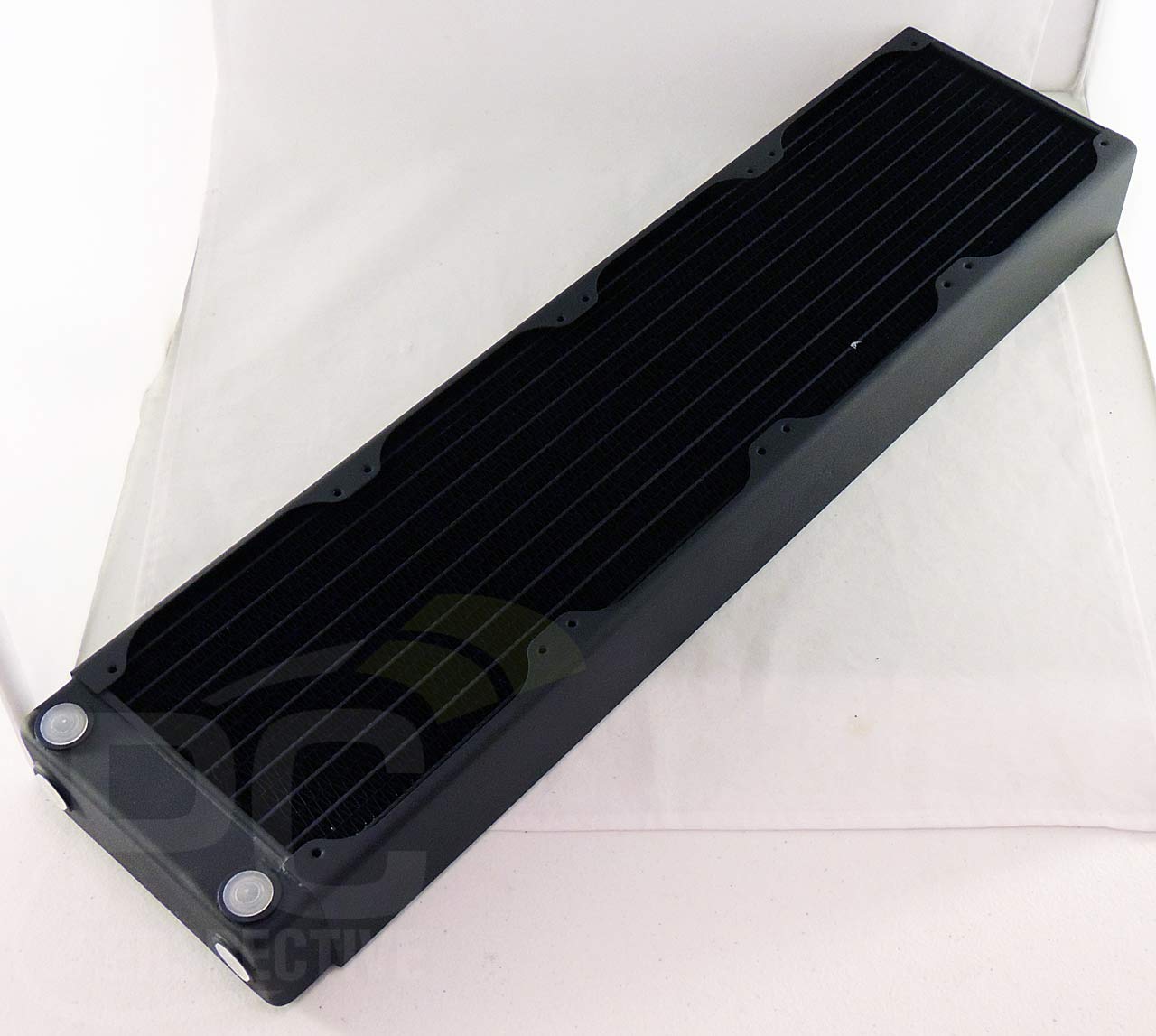 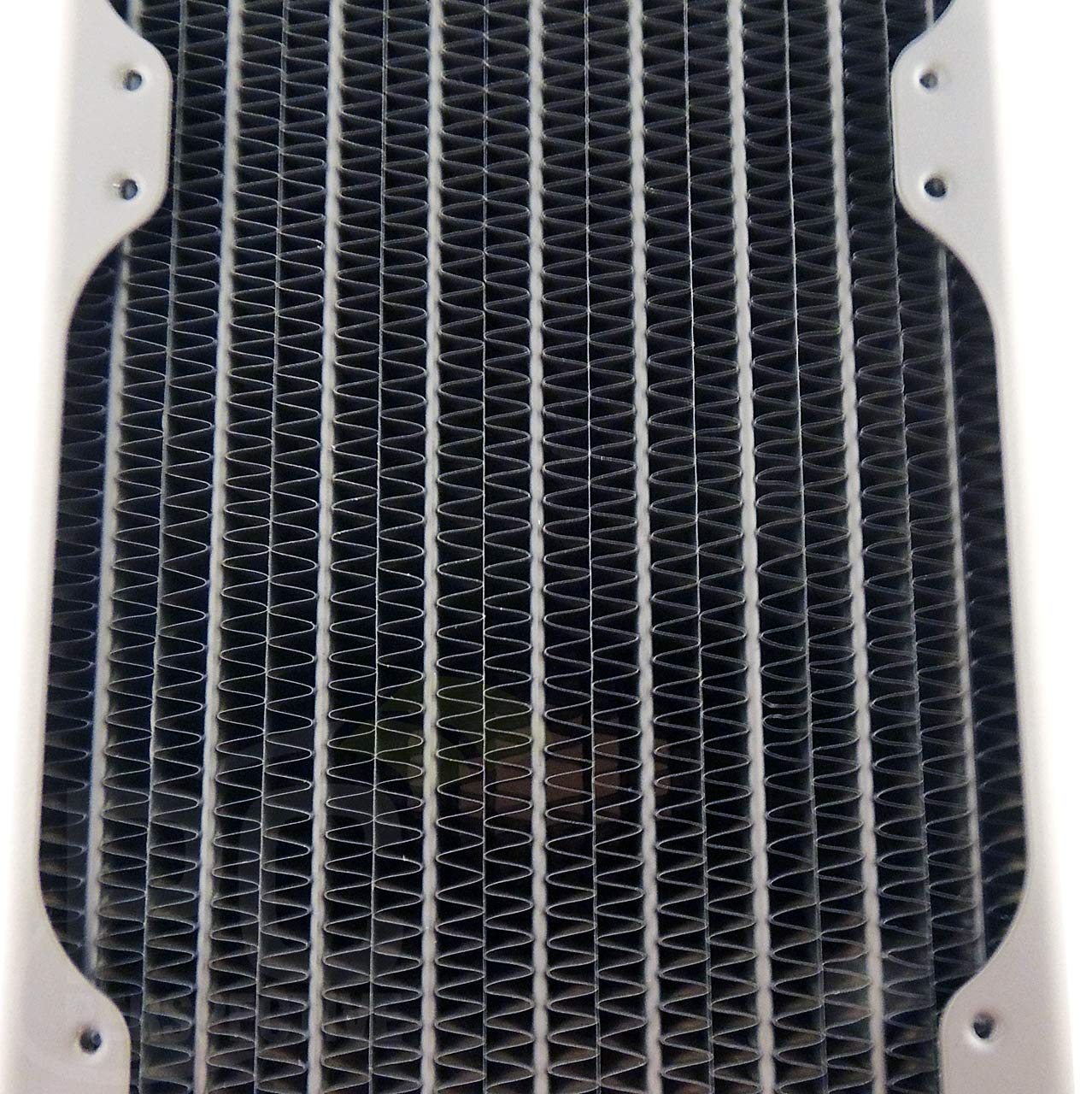 The RX480 Quad Fan Radiator is a 480mm unit, capable of hosting up to eight 120mm fans, four fans per side. As with other XSPC radiators, the RX480 radiator is designed with copper channels and fins with a brass plenum to optimize dissipation performance and minimize galvanic corrosion factors. The unit is encased in an aluminum shell with embedded fan mounting holes and stamped with the XSPC logo in its side. The fan mounting plate floats over the top and bottom of the radiator fins and channels to prevent accidental channel puncturing from the fan screws. The RX480 radiator has a split-fin design, essentially doubling fps (fin per inch) count of the radiator, enhancing its ability to dissipate heat with lower speed fans. However, this design has an inverse effect on the number of channels that can be used for liquid traversal. Less channels are able to be integrated into the design because the cooling fins between channels take up double the space. The thickness of the radiator partially negates the ability to use lower speed fans effectively with such a low fin count because the fan must push the air across a greater distance.  However, a push / pull fan configuration would help to counter balance the radiator thickness in conjunction with lower RPM fans.  The radiator has a flat-black powder-coated finish, giving its surface some amount of ruggedness and scratch resistance. 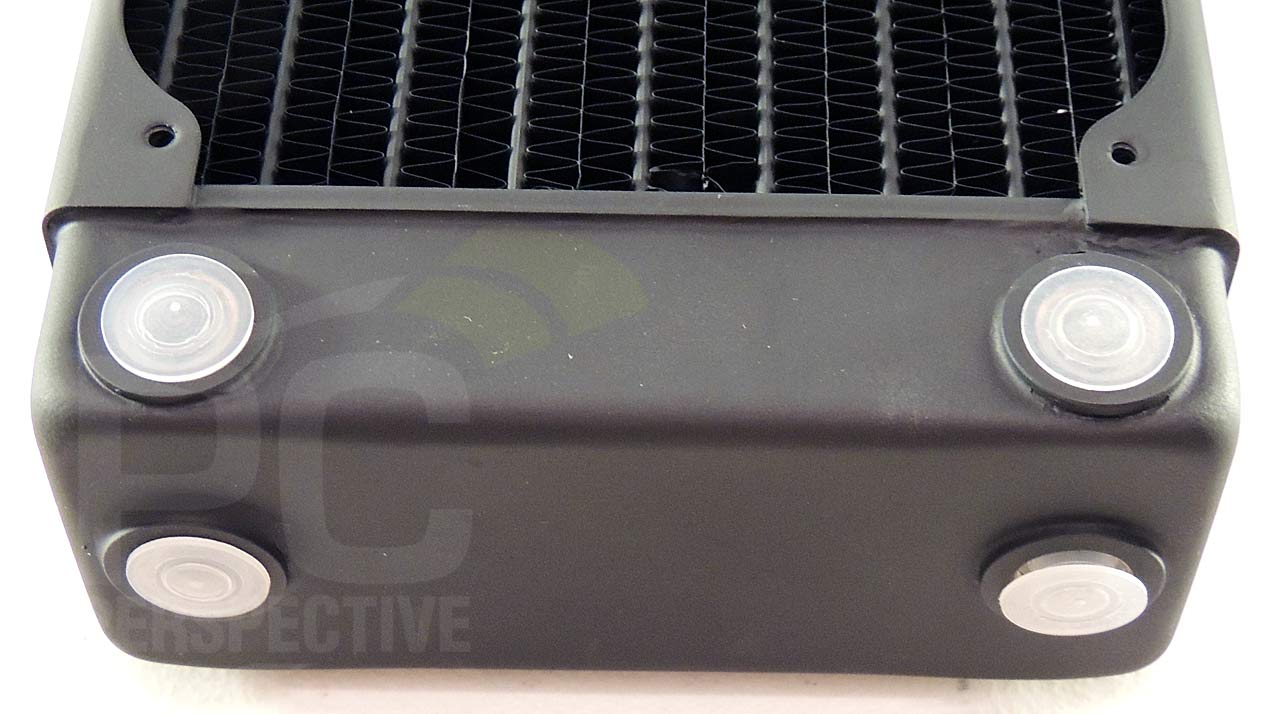 The radiator has a total of four G1/4" ports – two inlets and two outlets. The inlet/outlet port pairs are arranged along the radiator top and the front side of the unit. XSPC includes metal caps with the radiator so that the unused ports can be sealed. The dual port sets gives you more freedom with radiator placement and tube layout for optimal cooling loop design.

As is customary with their radiators, XSPC stamped the outer long edge of the radiator with their logo. The radiator's thickness is just shy of double that of a standard 25mm 120mm case fan, coming in at 45mm. In total, the radiator measures 518mm long by 130mm wide (20 inches long by 5 inches wide, approximately).

CoolerMasters’s new HAF 912 feels like it is half price 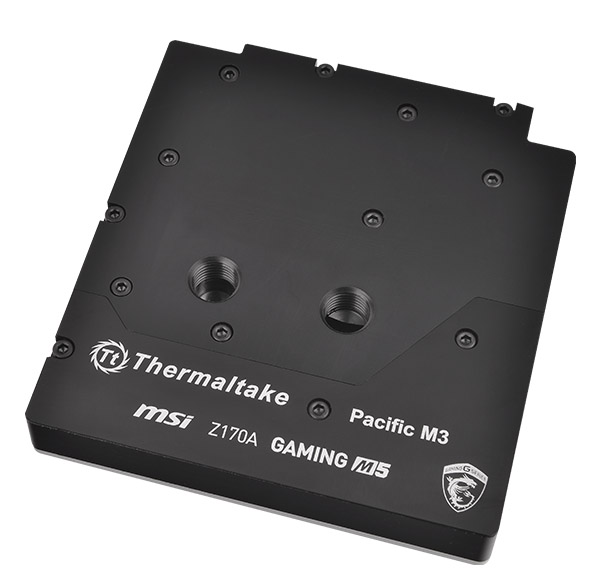 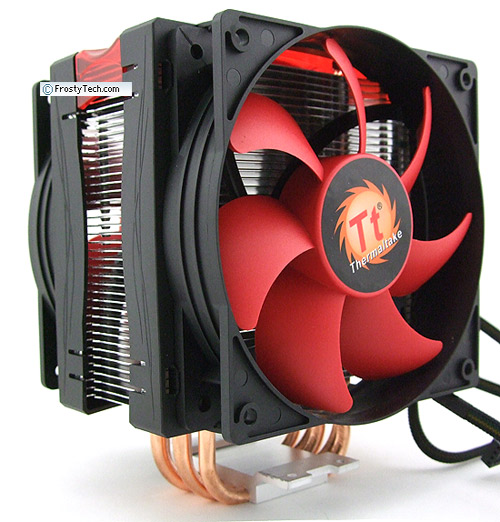 Thermaltake thinks big and spacious with the Frio Advanced heatsink