The first product that is now officially for sale is the aforementioned A8-7600.  This was the first cTDP part that AMD detailed last January, but again it did not go to sale for quite some time.  This chip features 2 modules (4 threads) and 6 GCN Compute Cores (2 less Compute Cores than the A10-7850K).  The chip is clocked on the CPU side from 3.1 GHz up to a maximum boost of 3.8 GHz.  The GPU portion is clocked at 720 MHz.  This combination of clocks allowed it to sit at the 65 watt TDP range, and with cTDP enabled go down to 45 watts TDP.  The performance of this part was pretty impressive and interesting at the TDPs it was aimed at.  The graphics portion certainly proved impressive against the competing Intel parts, and the CPU portion is at least competitive (and does not hold a user back too badly).  This part is being offered at $101 US. 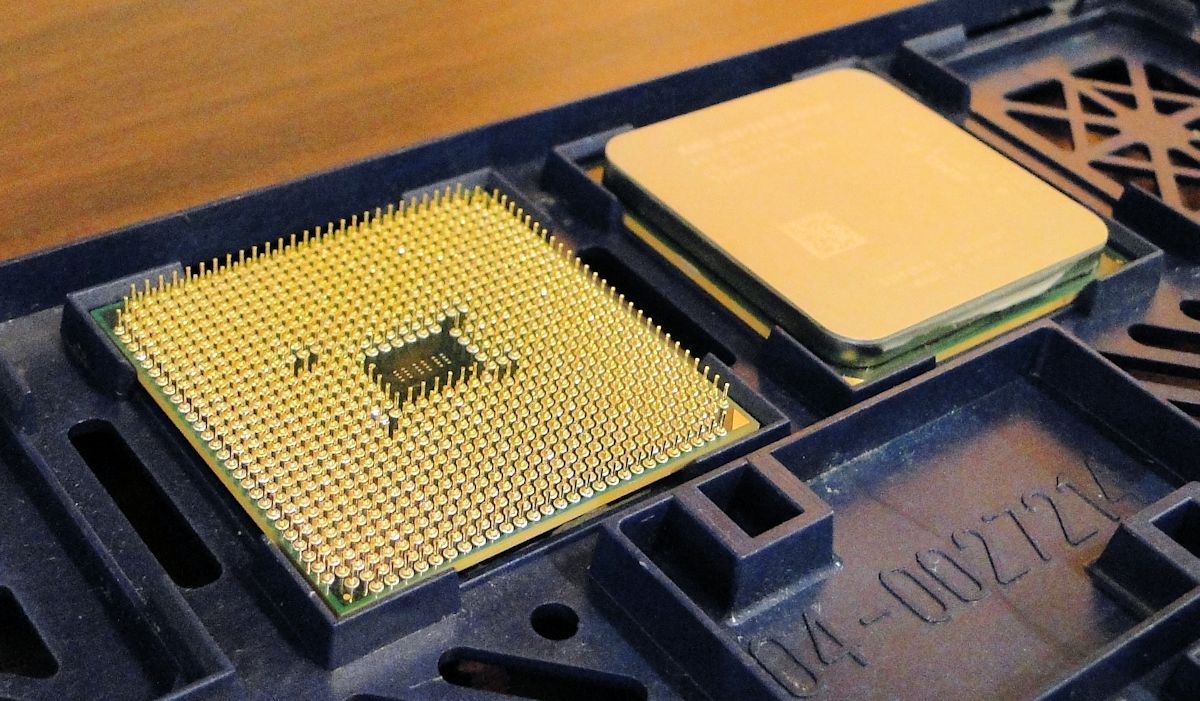 The second part is the A10-7800.  This is a fully enabled Kaveri product with 2 modules (4 threads) and 8 GCN compute cores.  The CPU portion ranges from 3.5 GHz to 3.9 GHz and it is a 65 watt TDP part.  It also supports the cTDP setting which takes it down to 45 watts TDP.  The GPU operates at 720 MHz and features the full complement of Compute Cores.  Even when cTDP is set to 45 watts, the GPU clock speed is unaffected.  For visual computing applications, this is a big win for AMD.  Consider that ½ of the die space is comprised of the graphics portion, being able to decrease the TDP by downclocking the CPU only is a big win for AMD.  These parts will be available for $155 US.

The final part is a bit of an odd duck.  The A6-7400K is a single module (2 threads) APU with only 4 GCN compute cores.  It is rated as a 65 watt TDP part with a 45 watt cTDP.  The single module goes from 3.5 GHz up to 3.9 GHz.  The Compute Cores do get a small clockspeed boost from the other members of the Kaveri family and run at 756 MHz.  Note as well that this chip is unlocked, so it is being aimed directly at the budget enthusiast who is willing to overclock this particular APU.  AMD is asking for a paltry $77 US for this part, putting it in direct competition with the Intel 20 Year Anniversary Pentium. 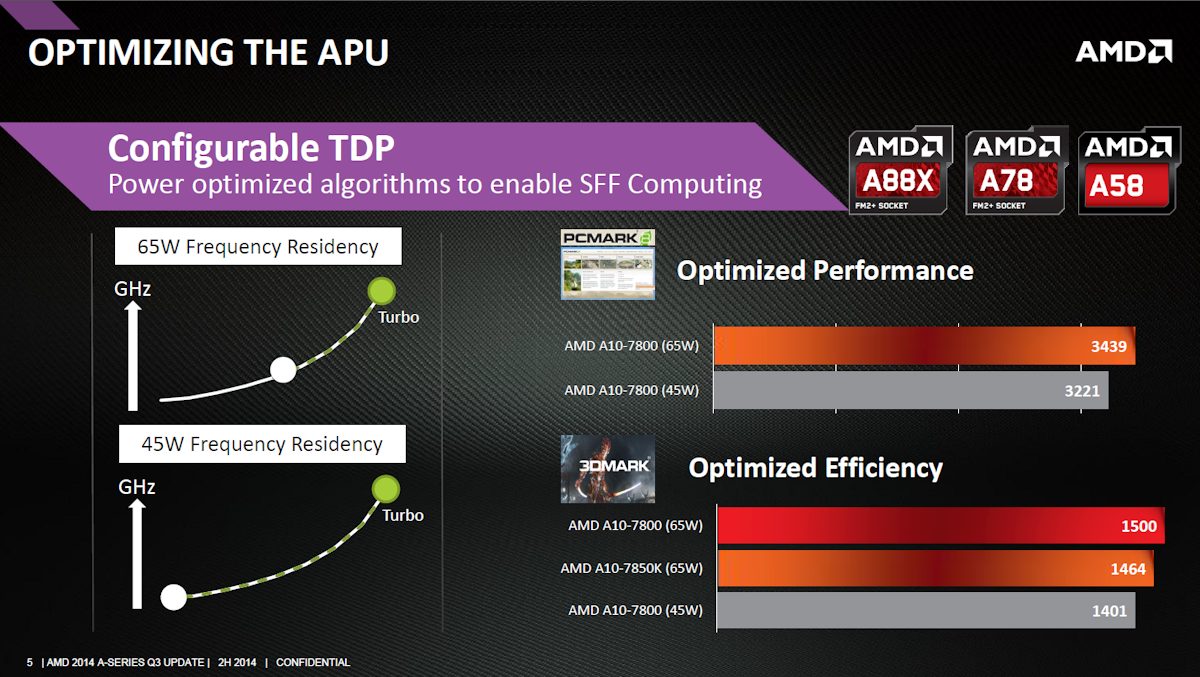 The 7800 and 7600 parts can support memory speeds up to 2133, but the 7400K can only support up to 1866 officially.  This is not a deathblow for the part, as it still only features one module and 4 compute cores.  The need for high speed memory is not as stiff as with other parts.  The A6-7400K L2 cache in the working module is cut in half as compared to other members of the Kaveri lineup.  Each module has 2 MB of L2, but half of this is disabled on the 7400K.

There are no new specific features to these chips.  Instead we still see the same Steamroller based CPU modules, GCN compute cores, video encode and decode engines, HSA support, and the TrueAudio unit.  These chips do feature the latest PCI-E 3.0 connectivity, which was sorely lacking from AMD parts until Kaveri.  OpenCL support and speed is another feather in AMD’s cap with this generation of chips.  AMD is really pushing this area, but we have yet to see truly full-fledged support.  The same can be said for HSA.  While we see some software developers leveraging OpenCL support, HSA has not had that particular breakthrough yet.  3D gaming is also another strong point for AMD over Intel.  Driver and ISV support for AMD APUs is very robust as compared.  While Intel is catching up there, the performance and quality from the Intel chips is not at the same level as where AMD is sitting. 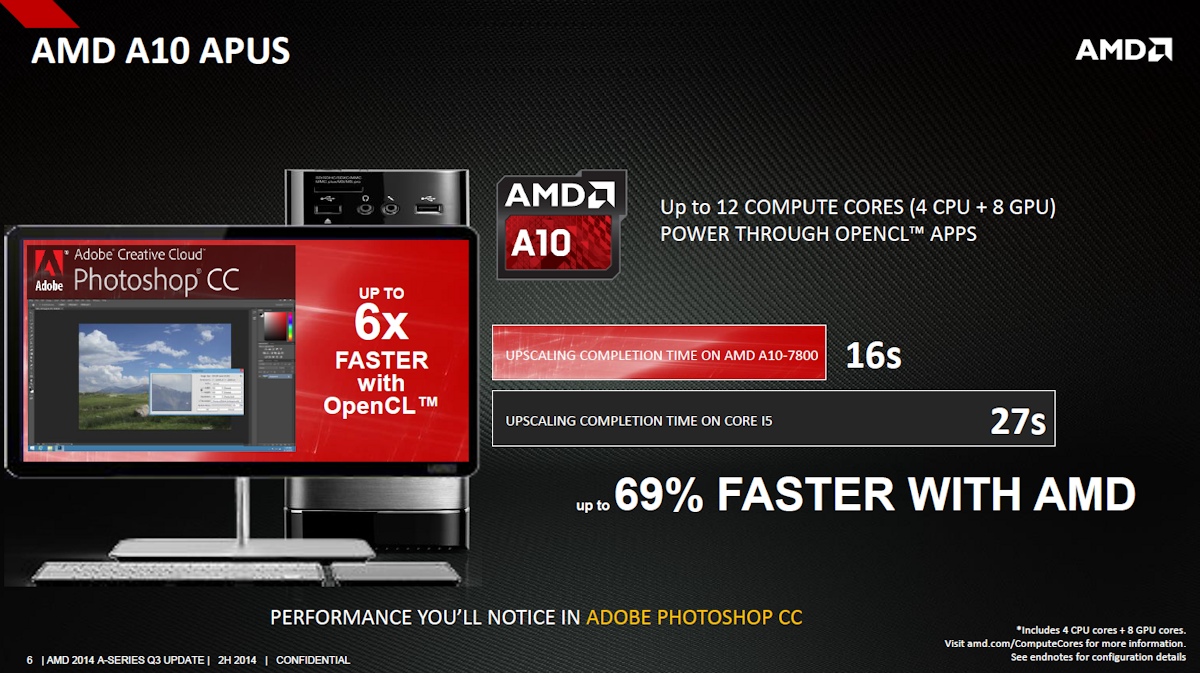 Finally, we have full Mantle support for AMD’s latest APUs.  AMD’s homegrown API is slowly gaining support around the industry.  While it certainly cannot be described as a juggernaut, it is making some waves.  Quite a few developers are playing with the technology, as it is a very interesting pre-cursor to DirectX 12.  DX12 will not be available until at least the Holiday Season, 2015.  Until that point, AMD’s Mantle API will be a good testing ground for IHVs (if others decide to adopt it) and ISVs (get hands on experience with a low level API).  Currently there are a handful of games which support Mantle, and more are coming down the road.  There are also several major game engines which support Mantle out of the box.  ISV’s who license these engines have the option of enabling Mantle functionality if they so desire.

Overall this is just a fleshing out of the product line from AMD with their APUs.  We have seen a pretty hefty amount of stagnation in the CPU market when it comes to big performance leaps over the past few years.  Certainly Intel has kept busy with their Sandy Bridge to Ivy Bridge to Haswell updates, but the clockspeed and performance increases over the past four years simply have not matched what we had seen leading up to that point.  Yes, we have more cores and more features integrated into a modern CPU/APU, but the big leaps in performance we have been used to are simply not there for the vast majority of applications.