ASUS has built a custom GTX 780 card that uses a DirectCU II cooler and doubles the standard amount of memory!

In the time periods between major GPU releases, companies like ASUS have the ability to really dig down and engineer truly unique products. With the expanded time between major GPU releases, from either NVIDIA or AMD, these products have continued evolving to offer better features and experiences than any graphics card before them. The ASUS Strix GTX 780 is exactly one of those solutions – taking a GTX 780 GPU that was originally released in May of last year and twisting it into a new design that offers better cooling, better power and lower noise levels.

ASUS intended, with the Strix GTX 780, to create a card that is perfect for high end PC gamers, without crossing into the realm of bank-breaking prices. They chose to go with the GeForce GTX 780 GPU from NVIDIA at a significant price drop from the GTX 780 Ti, with only a modest performance drop. They double the reference memory capacity from 3GB to 6GB of GDDR5, to assuage any buyer’s thoughts that 3GB wasn’t enough for multi-screen Surround gaming or 4K gaming. And they change the cooling solution to offer a near silent operation mode when used in “low impact” gaming titles.

The ASUS Strix GTX 780 card is a pretty large beast, both in physical size and in performance. The cooler is a slightly modified version of the very popular DirectCU II thermal design used in many of the custom built ASUS graphics cards. It has a heat dissipation area more than twice that of the reference NVIDIA cooler and uses larger fans that allow them to spin slower (and quieter) at the improved cooling capacity. 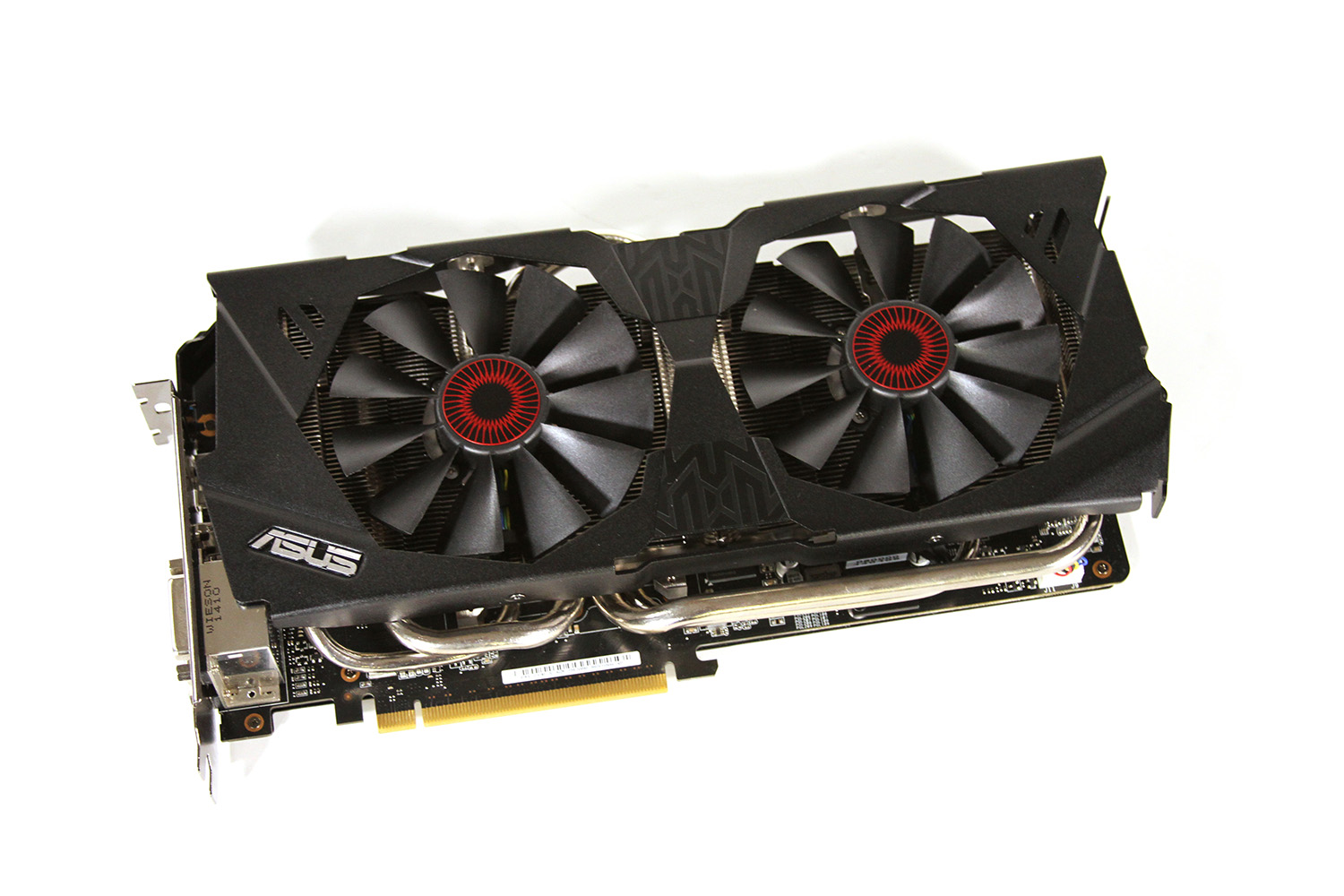 Out of the box, the ASUS Strix GTX 780 will run at 889 MHz base clock and 941 MHz Boost clock, a fairly modest increase over the 863/900 MHz rates of the reference card. Obviously with much better cooling and a lot of work being done on the PCB of this custom design, users will have a lot of headroom to overclock on their own, but I continue to implore companies like ASUS and MSI to up the ante out of the box! One area where ASUS does impress is with the memory – the Strix card features a full 6GB of GDDR5 running 6.0 GHz, twice the capacity of the reference GTX 780 (and even GTX 780 Ti) cards. If you had any concerns about Surround or 4K gaming, know that memory capacity will not be a problem. (Though raw compute power may still be.)

Looking at the bottom of the card, you’ll find four massive 10mm copper heatpipes used to draw the heat from the GPU die itself and out to the more than 4100 cm2 of fins on the heatsink. This allows the thermals to be more quickly wicked away from the GPU and allows for much lower ambient and working load temperature even at the same or better gaming frequencies. 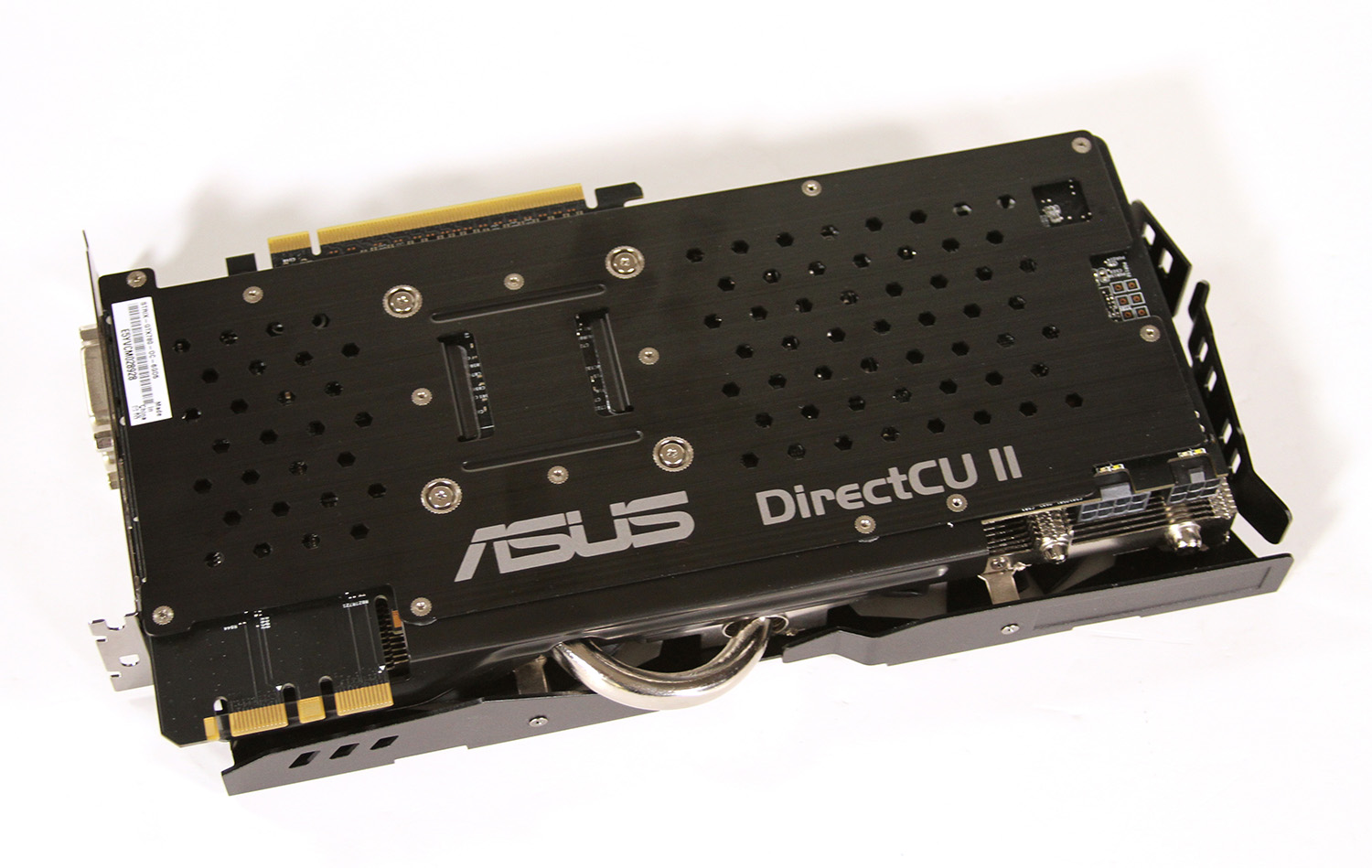 The back side of the ASUS Strix GTX 780 has a strong backplane used to maintain PCB integrity as well as acting like a heatsink for the PCB as well. You can also tell by looking at where the SLI connectors on the card that this is a very TALL card that may require more room in a case than it appears at first glance. Notice that the SLI bridge and surrounding PCB are extended well above the metal case bracket on the card and also that the top heatpipe goes even a few millimeters beyond that. Keep in mind the 5.8-in height if considering a small form factor PC.

Display connections on the card include a pair of DVI ports, a full size DisplayPort and a full size HDMI. Those have pretty much remained static since the release of the first reference GTX 780 cards though, at this point, it’s time to start criticizing NVIDIA partners for not including more DP connections for multiple G-Sync monitors on a single card.

Also note in this cross section photo how much taller the heatsink and SLI connectors are over the bracket. 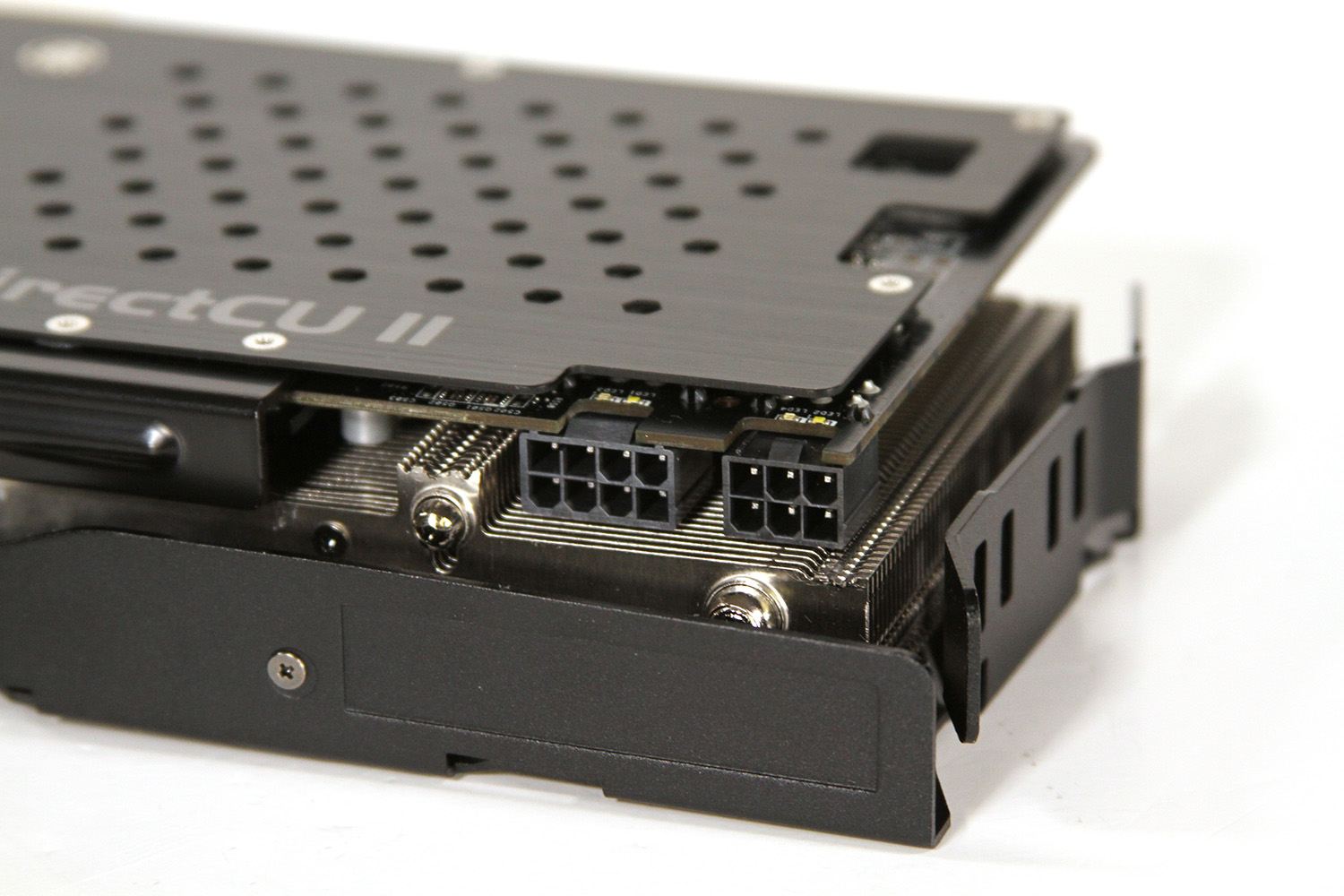 Hidden under the back corner shroud is the 8+6 power connections ASUS has included on the Strix GTX 780. They are rotated by 180 degrees, with the clips facing the back of the card rather than the front allowing for much easier removal considering the height of the heatsink. These power connectors have LEDs under them that illuminate red until the power connections are properly attached, upon which they turn white. Just a gentle remind for ASUS to hook up your damn power, son. 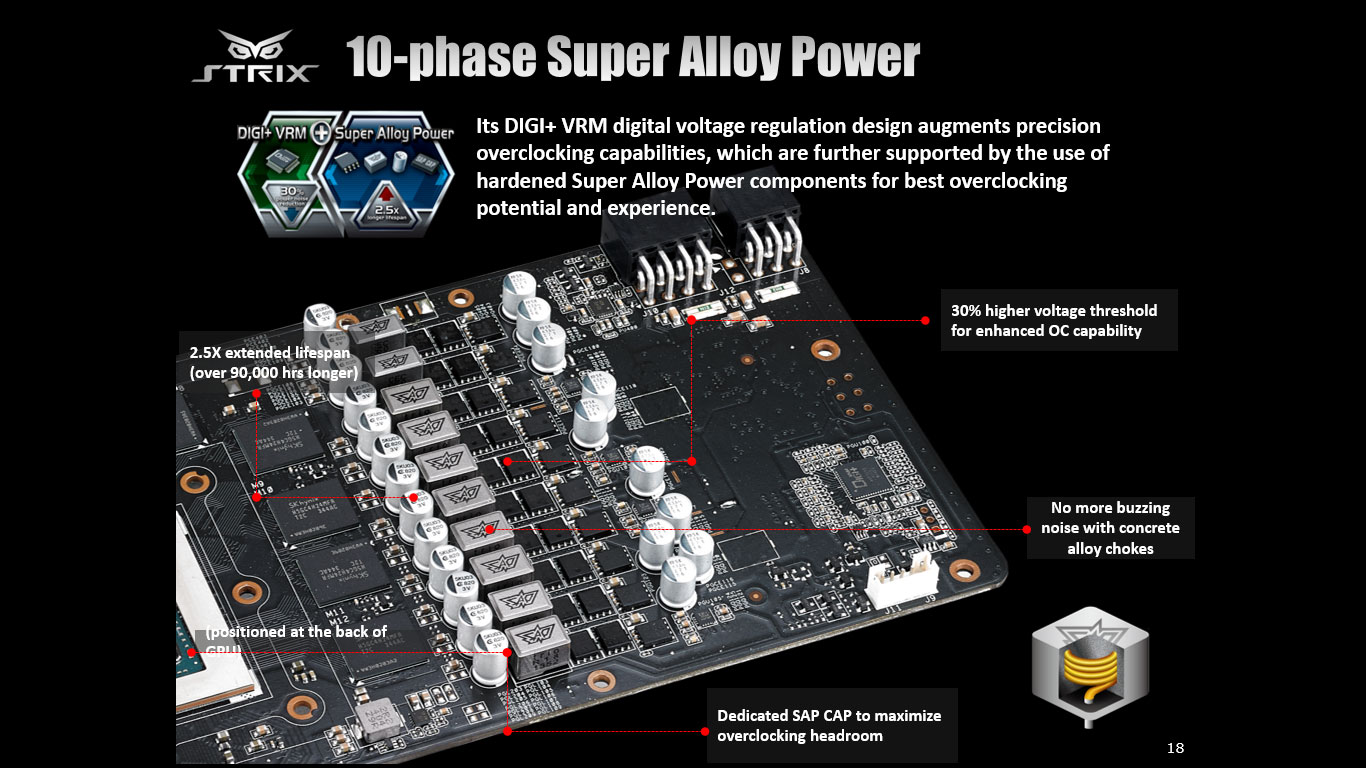 The power delivery on the ASUS Strix GTX 780 has been upgraded over the reference design as well including a move to an 8-phase digital power system from the default 6-phase analog system. ASUS claims this offers 30% cleaner power to the GPU and 2.5x the lifespan of the board components, allowing for more flexibility when consumers decide to overclock. 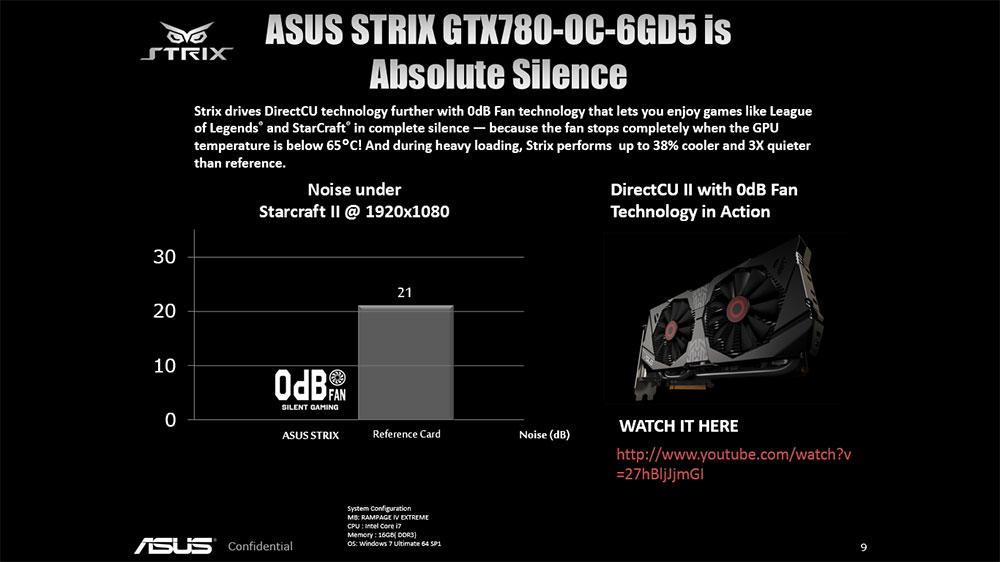 The primary feature change with the Strix gaming card is the ability to run some games, in some situations in a “silent” mode, where the fans literally don’t spin. According to ASUS, during games like StarCraft II and League of Legends where the temperature of the GPU is able to stay below 65C, the fans on the cooler will simply never come on, maintaining 0db of sound being added to your system by the GPU. Of course, once a game pushes hard enough for a GPU to break the 65C mark, the fans would spin up and you will still get the advantages of the DirectCU II cooler (quieter and more efficient).

The idea of the Strix design with a cooler than run in a “silent” mode when the temperature is below a certain threshold is cool, and I was able to get it to work, but not right out of the box as you might have expected it to. After completing my normal runs of benchmarks on the card I set out to see if the ASUS claims were spot on about the ability for Strix to play less complex games without spinning fans.

The first game that I tried was Dota 2, the second most popular PC game in the world (behind only League of Legends). The GPU temperature started out under 58C but we saw it quickly ramp up into the 65C range inside of 2 minutes, which caused the fans to spin up. Based on what GPU-Z is telling me and my observations, the fans don’t actually spin until the GPU reports a fan percentage of 35%. Keep in mind that during this Dota 2 session, the GPU was never clocked higher than 731 MHz (well below the maximum GPU speeds) but it was still enough to heat up the core to require some active cooling.

Next I tried Unreal Tournament 2004. Yes, UT2004. I had the same result here – within a few minutes the fans on the ASUS Strix GTX 780 were spinning – very quietly mind you, but spinning. In this instance the GPU temperature started at about 51C but rose to the 65C level upon which the software moved the fan % to 35%, kicking things off. 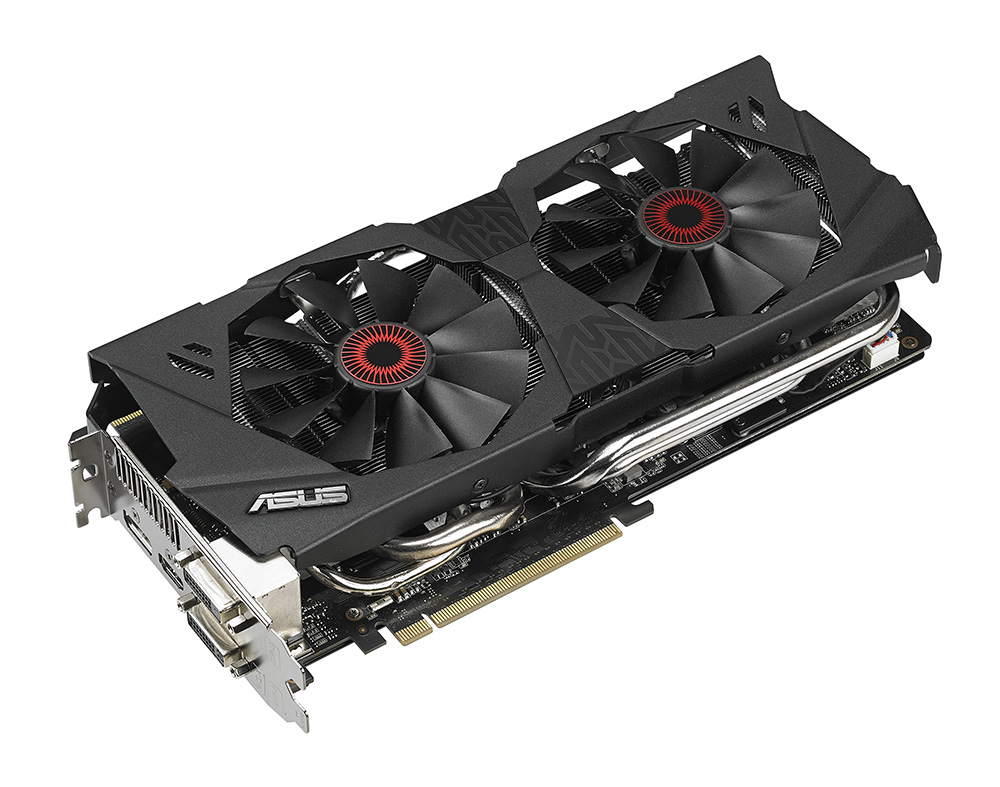 To get this silent gaming feature to work, I had to enable the frame rate limiter inside software like EVGA’s Precision X. This is an NVIDIA supported feature (since the release of the GTX 680) but I honestly don’t use it, ever, as we tend to play games at resolutions and quality settings where we need all the GPU horsepower available to it. With it enabled and set to 80 FPS, I again set out to play some UT2004. This time the results were a bit different. After 10+ minutes of gaming the GPU never crossed 44C in temperature, the core frequency didn’t go over 324 MHz and the fans, as you would expect, never spun. This resulted in playing UT2004 without a GPU fan and thus as quietly as possible.

So the technology works, just maybe not in as many circumstances as you would be led to believe by ASUS. If you want to use the feature, the frame rate limiting capability of NVIDIA GPUs will allow it; that is definitely better than any other GPU on the market today. As long as you can keep that GTX 780 GPU under the 65C level you can enjoy this particular feature of the Strix.­­­­