To help facilitate our review, the good folks at Cooler Master sent over a HAF 935 Mod-Tower enclosure along with an extra HAF 915F module, which can be stacked on top of or underneath the HAF 935. Combining the modular case pieces together results in a stack of three cases over three feet high. 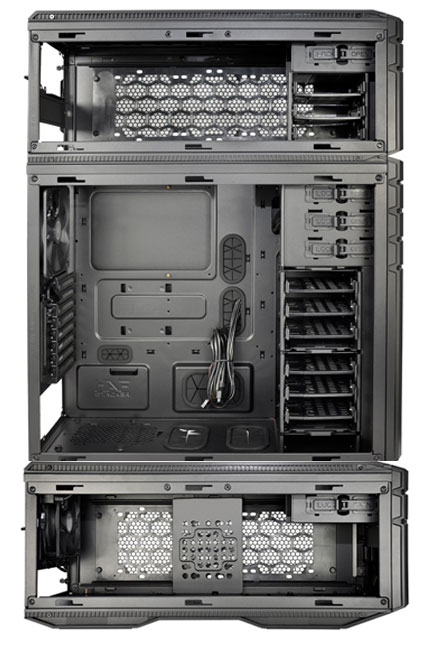 When I first looked at this huge case I wondered why anyone would need or want a case this big (or bigger). But then my imagination kicked in and the creative juices started flowing… what if? I was instantly taken back about 10~12 years to a time when I was obsessed with water-cooling. Back then I was designing, testing, and reviewing all sorts of water-cooling components; primarily waterblocks and pumps.  One of my projects from that era was building a Thermoelectric (TEC) water chiller. I used two 156W Peltier chips sandwiched between custom copper waterblocks, two Mean Well S-320-24 power supplies, dual pumps, radiators and four very loud Delta fans.  The end result was cold-side water temperatures down to -28° F (yes, 28 degrees below zero) with no load. This made for some interesting overclocking runs but also required a LOT of careful insulation to eliminate condensation. 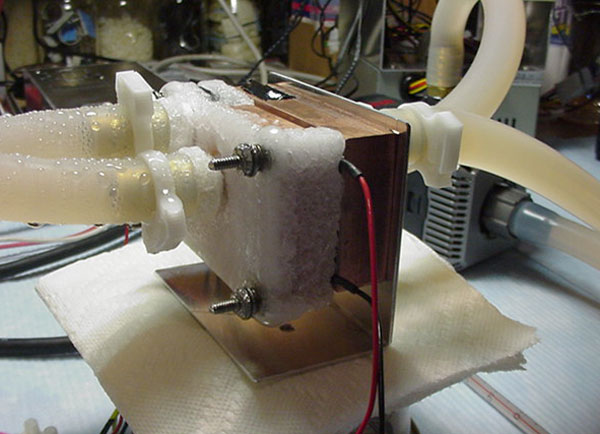 At the time I considered trying to stuff all the components into a PC enclosure so we could take the rig on the road but I didn’t have one or even know of a case that was large enough to accommodate all the hardware.

Fast-forward 12 years. I no longer have all the components I used to build the Pelt chiller but now I have a case that could easily house everything. Let’s take a creative look at how we might install a Thermoelectric Water Chiller into the HAF Stacker cases. The following diagram shows one way a TEC water chiller could be installed in the Stacker Series cases. And yes, there are many options and different ways to accomplish this; so be creative! 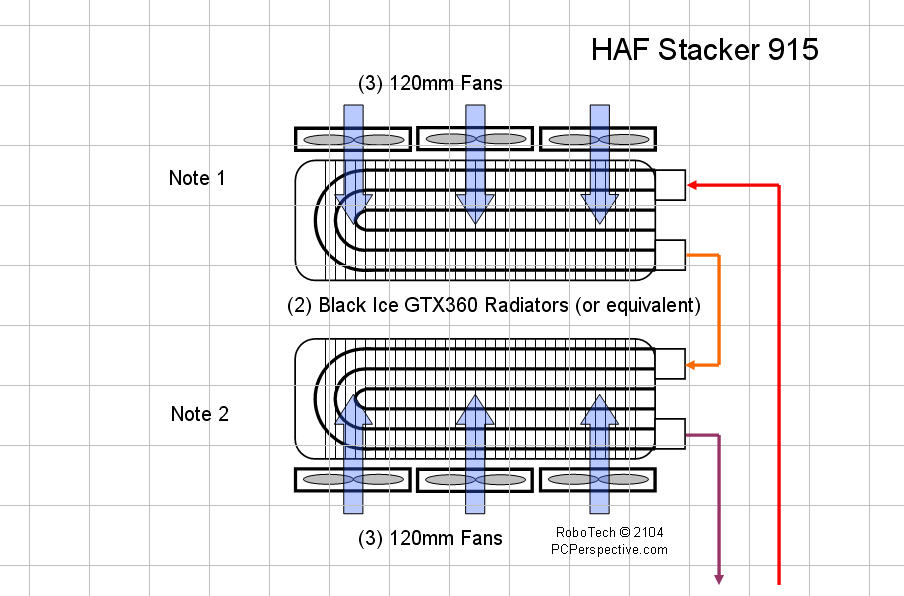 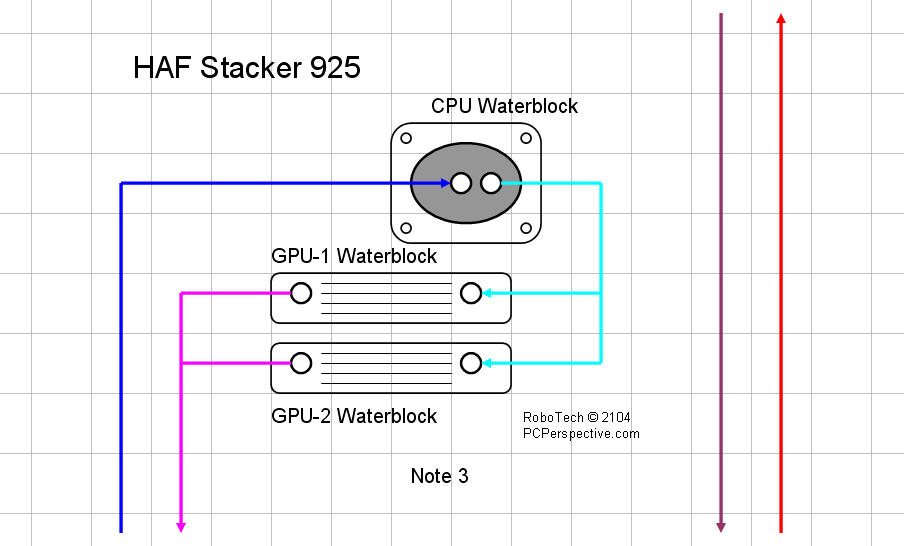 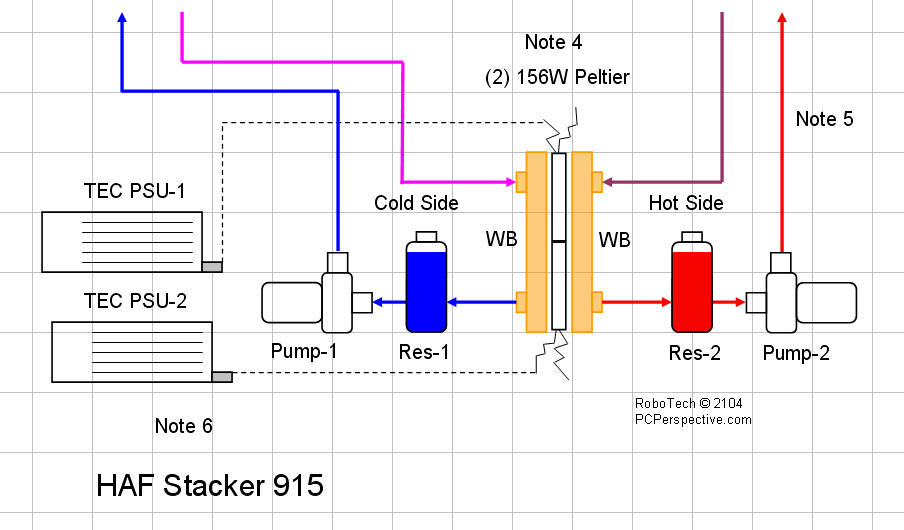 Note 2: When using two radiators, they can either be plumbed in series (as shown) or connected in parallel. Connecting them in parallel will decrease the water velocity flowing through each radiator and theoretically will reduce the overall pressure drop (flow resistance) through the pair of radiators. Different people have their preferred method but if you are really concerned about this you should try both and see if one configuration produces better results than the other.

Note 3: Again, when using multiple water blocks you have the option of connecting them in series or parallel (or a combination of the two as I show above). Whichever water block has the greatest flow resistance will have the greatest impact on overall loop flow. And again, the best approach to maximum system performance is to try various combinations and see which one yields the best results.

Note 4: In my original build I used two 156W Peltier chips sandwiched between two DangerDen cold plates; one on the hot side to dissipate heat and one on the cold side to create the chill water. The two TECs work together to actively pump heat from the cold side over to the hot side. There doesn’t seem to be as much interest in TEC coolers today as there was ten years ago and parts appear harder to find. Two 172W Peltier chips could alternately be used if you can find them.

Note 5: I’m a big fan of reservoirs and I always incorporate one into any water-cooling system I build. A reservoir provides an expansion volume for the water, gives air bubbles a place to exit the loop, insures the inlet to the pump is always flooded, and provides an easy fill point.

I basically configured the plumbing in this section to simplify the drawing. You can rearrange the order of components to suit your own preference but in reality it usually doesn’t make much of a measurable difference. Try different configurations and see which works best for you!

Note 6: For optimum performance, the TEC power supply(s) should be closely matched to the Peltier chips you are using. The two critical parameters are voltage and current. If a TEC is rated for 15 VDC and 10A, it will not operate as effectively on 12 VDC and therefore its rated wattage will be reduced. Ideally you want to come as close as you can to the Peltier’s design operating voltage. The two 156W chips I used in my original water chiller were designed to operate at 25 VDC so I used two dedicated PSUs rated at 24 VDC and tweaked the outputs to 25V. You can find Peltier devices that will work well at 12V and the new breed of PC power supplies should have no problem powering them (think Swiftech… 🙂

We hope this has given you an entertaining look at one possible use for a large stackable case system.

Serious power for the serious builder